As a player collector, I have a general goal to collect as many cards as I can of players I like. But rarely do I get obsessive about it. I'm not sure if the term "supercollector" has a hard and fast definition, but I consider a supercollector someone who is obsessed with owning every card a certain player has. Every card. Oddballs, promos, everything. But I think you can also fall into becoming a supercollector passively (relatively speaking) by amassing a large number of different cards of one player. I'm not sure what the threshold is. 200 cards? 500? 1000? But there's a point where you step back and say, "Wow, I've got a ton of cards from this guy! I'm no longer merely a mild-mannered collector; From this day forth, I am a (yanks off glasses) SUPERCOLLECTOR!"

Then you're forced to pay over a hundred bucks for a promotional 1990 Donruss card of your guy. Why? Because it's a card of that player that you don't have. Your duty as a supercollector is to rescue all such cards and give them sanctuary within the confines of your collection.

A player collector wants to get all the cards of a certain player. A supercollector needs to.

Some supercollectors are superdupercollectors. They go after all existing cards of their guy, even if they already have it. Their insatiable quest for cardboard featuring a particular man's picture fills box after box, binder after binder, page after page of identical cards. These poor saps are stuck with 150+ copies of their guy's 1989 Topps card.

Another iteration of a superdupercollector is a guy who has every card of a player and then gets them all graded. Apparently PSA has lists you can find somewhere (link, anyone?). They have a big master list of all the cards of your guy that exist. Then they have a list of everybody who has all those cards who sent them in to be graded. Then they rank the superdupercollectors by whoever has the mint-est supercollection of that player. The superdupercollector with the most 10's is then crowned The Ultimate (Player Name) Collector and a big gala is held in his or her honor, I imagine. If the player in question is still living, he will attend the ceremony and personally lower the jewel-encrusted crown onto the head of the ultimate collector. It's the stuff of dreams.


I'm not aware of any non-graded supercollector registries. I'm toying with the idea of starting one myself if I can't find one.. Just like a page on the blog where if you have, say, over 500 different cards of one player (or for guys with less existing cards, you own [almost] every known card), you get your name and details on a list.
Player's Name, Collector's Name, Number of different cards, Number of total cards, Link to collector's blog or whatever. Maybe some sort of photographic evidence to keep people honest.
Wouldn't that be kinda neat? Even if it only reached a small percentage of collectors out there, it'd be interesting to see who has an insane amount of Cal Ripkens or Nolan Ryans or Wade Boggses or whoevers. And if your name was up there as "The Top Nolan Ryan Collector" or whatever, that'd feel pretty damn rewarding. Kind of like how video games had magazines back in the day where people would send in their high scores and whatnot. If something like this is out there-- or if it isn't but it sounds like a cool idea-- give me some feedback in the comments.

But back to the conundrum.

As you can imagine, it's quite a responsibility. You've got to keep a vigilant eye on eBay, COMC, and the like, just in case some oddball you need pops up, such as a cutout from a Canadian dairy farm or something obscure along those lines. It can get pretty expensive, as well. Even if most of the cards are under a buck, it adds up. Any self-respecting supercollector also ventures into non-card collectibles, such as magazines with the guy on the cover, stamps with his picture, "coins", collectible cups, figurines, bobbleheads, autographed bats and balls, 8x10's, etc etc etc.

I'm not a supercollector of anybody right now, though I've thought about it.

Step 1 of choosing a player to supercollect is simple: pick a guy you like a lot. Chances are he's your all-time favorite player. But if you're like me and don't really have that one guy who comes to mind as your favorite, it will take some more thought. Modern superstars are enticing, such as a guy like Ken Griffey, Jr. But just know that you've got millions of cards that will then be your duty to obtain. You could settle on a non-star, perhaps a scrappy utility guy who helped your team scrape out a few wins back when you were an impressionable young fan (someone along the lines of Archi Cianfrocco). This might be a less "sexy" route, but at least you've got a realistic goal of getting all their cards before you die, and without taking out a second mortgage. But then again, the chase is a big part of the fun. If you can just buy a lot on eBay of "Every (Joe Shmoe) card ever made" and then you're done, you've missed out on the full supercollector experience.

You could pick an all-time great, like Mickey Mantle or Jackie Robinson. Legends like that are easy to get behind, of course, since they were so cool. Owning a couple thousand Mantles will impress more people than owning a couple thousand Cianfroccos. But their vintage cards are expensive, and a buttload of post-career cards are out there (and keep coming out every year, each with a few parallels) to keep you busy until the end of your lifetime.

So if you really want to go easy on yourself, you'll pick a lesser-known player who played before the mid '80s. Once you get into 1986 or so, the number of cards produced skyrockets.

Here is a scientific graph to illustrate the point: 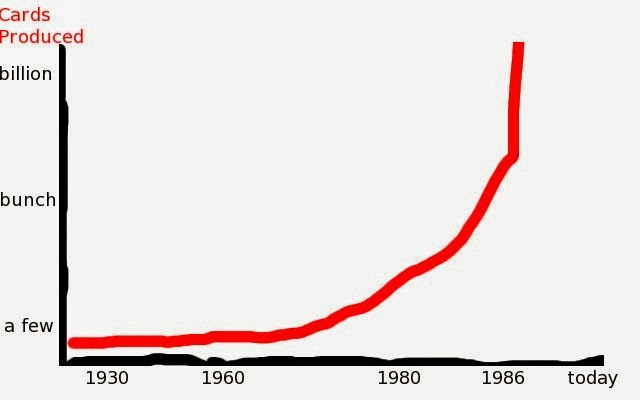 As you can see, starting around 1990, infinity cards were produced of every major league ballplayer per year.

Personally, if I decided to take on the responsibility of becoming a supercollector, I would start with the path of least resistance. Well, the guy has got to have at least a couple dozen cards out there. You can't just say you're a supercollector of some one-card-wonder who shared a multiplayer rookie card in 1969 Topps but never saw cardboard again. What's the point in that?

That said, I very much appreciate closure. That light at the end of the tunnel to keep you motivated, eventually followed by a wonderful sense of accomplishment. I think one of the reasons I never really got into comic books that much is because the stories just stretch out forever. I am end-goal focused. Set my sights on something then check it off the list. Wrapped up with a bow on top. On to the next thing.


So for that reason I could never supercollect anyone who played past the early 80s. And top-tier HOFers are out (really any HOFers other than the forgotten lowest tier guys), since the neverending post-career cards would torment me.

A possible candidate for me would be Dick Allen, whose cards I've featured in the past. An active professional player from 1960 (counting minor leagues) through 1977, he missed the "infinite number of cards" days. But still, he was one of the biggest stars in the game for a solid decade, so there's still a ton of oddballs from the 60s and 70s with his picture on them. While he's not exactly a big name today (he's not in the Hall), he still gets included in a modern retired/legend set from time to time.

My supercollecting player would need to be a notch below that. I think I've found him.
Drumroll, please. 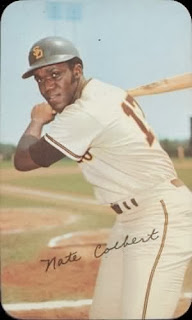 Nate Colbert. Not exactly a household name, but he was the first Padres star, a hard-swinging cleanup hitter for those terrible early San Diego teams, 1969-1974. While the Padres are "my team", he was before my time. I learned of Nate Colbert when Padres broadcasters in the 90s would occasionally bring up all-time team power records. Hard to believe, but he still holds the record for most home runs by a Friar with 163 (and strikeouts with 773). He was always sort of a mythical figure to me in my younger days, only known by whispers of his legend. It wasn't really till the internet came around that I could look up his stats and see what his cards looked like.

His professional career stretched from 1964 through 1976, and much of that run was spent either in the minors or being unproductive in the majors. He suited up for 5 teams during those years, but only during his tenure in San Diego was he an everyday major leaguer (6 years). And his numbers tanked in his last year in the brown & yellow, so that works out to 5 years of being a star (1969, 1970, 1971, 1972, 1973). Arguably the best player on a bad team, he definitely saw his share of oddball cards in the early 70s. But since, again, he was only good for 5 years, he's got a finite number of cards out there. And he hasn't gotten a lot of post-career love from card companies. Topps, in particular, as far as I know, has never included Colbert in the checklist for any Archives/Retired/All-Time Fan Favorites type set. What the hell, Topps? He's the club's all-time home run hitter! Throw him in an oldies set once in a while! At least he's got a Panini Golden Age/Cooperstown card or two.

But the good news here from a supercollector standpoint is there are less new cards to worry about coming out every year.

(Oh, and he also coached in the minors in the early 90s, back when even minor league coaches got their own cards, so he's got some minor league cards, too.)

So yeah, I'm not saying I'm going to start supercollecting anybody right now, but if I do decide to in the foreseeable future, my guy is tentatively Nate Colbert. One of these days I'll do a post of the cards of his I've got so far.

What do you guys think? Have I summed up the life of a supercollector sufficiently? Please do set me straight if botched anything. Are you a supercollector of anybody, and if so, whom?
Posted by defgav at 7:42 AM