You may have noticed I end nearly every-other post here with solicitations for trades. Yet nobody ever wants to trade with me! I blame the fact that I'm not a strict team collector or a set collector and that limits my wantlist. Plus since I'm new on the baseball card blogosphere block, I still have lots of "networking" and trust-building to do, I guess. Still, though, you guys must have a few dups of Vlad, Giles, Piazza, and other guys I collect that you could painlessly part with. Throw them my way and I'll send you some cards from the team you like or whatever. I'm not expecting huge trade packages.. just a PWE here and there would be sweet. I should probably do more "trade bait" posts to entice you guys.


Great Beach Boys song from the 70s called "Trader" (sadly, it's not about baseball cards)

But one guy I seemed to get along well with out of the gate was Backstop Cards over at All The Way To The Backstop. He's a great guy and does a very nice job with his Padres-focused blog over there. When we started talking about a trade, I sent him a PWE with a small stash of cards and suggested he could send me back a handful of his Padre dups (yes, I'm not really a team collector, but occasionally break down for Padres commons), and not too long later he replied with a stuffed package of probably 150+ cards. I was blown away. So many awesome cards. I split up the haul into 2 roughly even piles: cards I liked and cards I really liked. I was going to post the latter cards in this post, but after a while it got ridiculous, so I stopped after hardly making a dent. I'll have to feature some of the other cards at some point in the future. But yeah, thanks, man!

Anyways, here are a few of the cards. A rite of passage for any baseball card blogger: his 1st trade post. 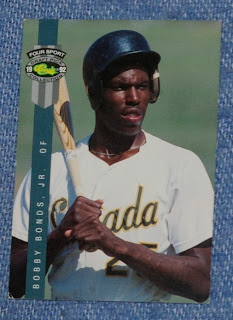 Who knew Barry Bonds had a younger brother who played in the Padres chain? Cool. From the looks of his numbers, Big Bro wasn't sharing his cream nor his clear. 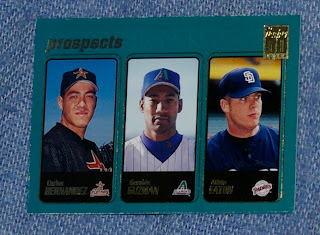 Adam Eaton prospect card. He always seemed to have spurts of brilliance, but could never really put it all together for a quality season. He has since pulled a Rick Ankiel and reinvented himself as an outfielder. --What's that you say? That's a different guy with the same name? Oh. Bummer. Nevermind. 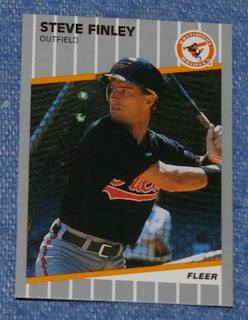 There was a healthy sampling of cool Steve Finley cards included in the trade package. I choose this one to show since I don't think I ever had a RC of his, so it's neat to have now. He'll always have a place in my heart for being the difference-maker on those late 90s Padres teams with lots of key hits and defensive gems. 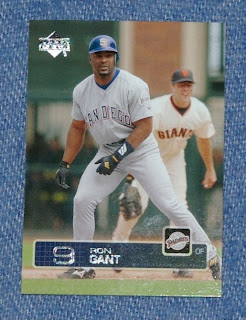 Ron Gant is one of those guys I've always liked a lot though his numbers weren't exactly worthy of doe-eyed wonderment. Maybe because he had a real nice 1990 season, and that happened to be the year I first got crazy for the game, so guys who had career years in 1990 often get misremembered by me as better players than they actually were. I only recently remembered that he spent a couple years as a Friar near the end of his playing days. 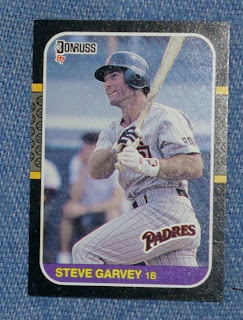 Many baseball fans think Garvey looks weird to them in a Padres uniform, but I feel that way about him in a Dodger uniform. When I was a kid, him and Gwynn were the superstars of the team. I still like him a lot as a player, though the stories about his numerous extramarital affairs and subsequent babies snag my admiration a bit. Plus it's a bummer his numbers wound up just shy of HOF-caliber. But yeah, I collect him and needed this card, so it's a score. 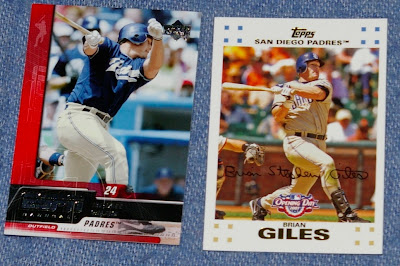 Good old Brian Giles. One of these days I'm gonna type up a post about how he worked at my high school before making it to the bigs. These are more "cards I missed out on" from during the time when I was still a big Padres fan, but not an active card collector. Happy to get these cards, as they're "new to me" and help me reminisce about the days I'd watch nearly every game on Channel 4.

Hey look, non-Padres related cards! Well, a case could be made for Ozzie, but Tony Perez and Ryne Sandberg never suited up for San Diego. I think these might be my first ever Allen & Ginter cards, believe it or not. I know it's not an opinion shared by many-- if any!-- fellow collectors, but this product line just doesn't interest me in the slightest. (Not to look a gift horse in the mouth here; I do like these particular guys! Great cards!) The "sketch" look of the fronts, and the spelled-out stats on the back ("one thousand three hundred fifty-two runners batted inward, tally-ho, governor") just turn me off. I like turning over a card and soaking up the stats, not feeling like I'm reading a wedding invitation. I get the nostalgia angle, but A&G just doesn't work for me. 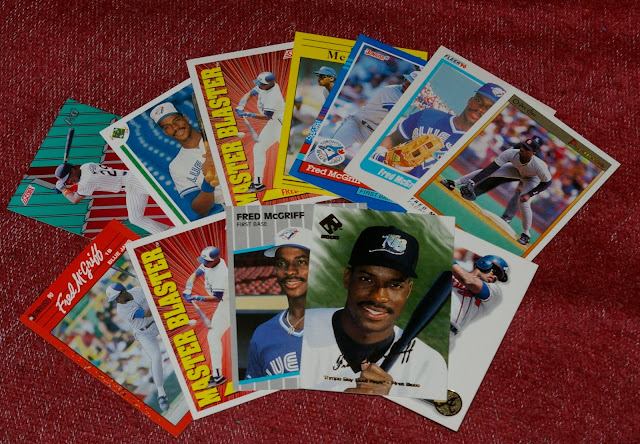 A bunch of McGriffs! Some of these I already had, but still! Gotta love the Crime Dog. 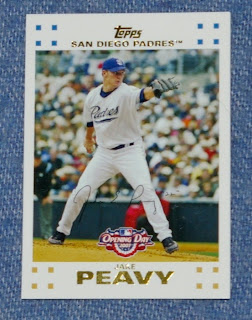 Finally, here's a nice looking Jake Peavy card. Makes me miss the days San Diego put a competitive team on the field. Jake's still out there pitching for somebody (Red Sox, right?), compiling a fine career. Good for him.

Ok, that's all the cards I have the energy to take pictures of and write about for now, but trust me I could go on and on. Refractors, autographs, lots of neat cards. Again, big thanks to Backstop Cards for making my first online baseball card trade such a good one. Next time we trade I'll have to try to balance the scales a bit.

And again, if anybody else is down for a trade, please check out my wantlist and get in touch. Thanks!
Posted by defgav at 7:52 AM