Oh man, I just did a post featuring my Jordan PC, but I forgot about this one. 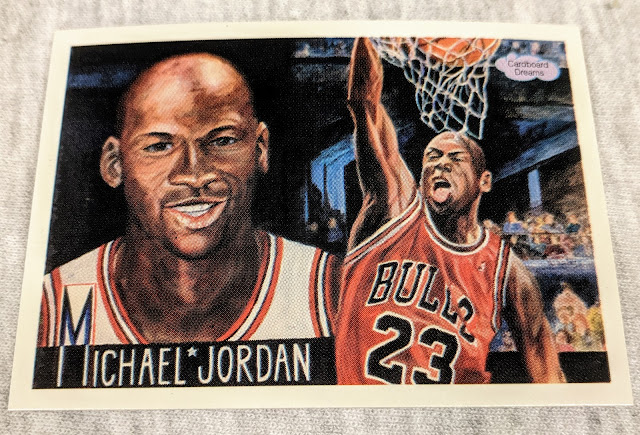 Like with all the cards in the oddball 1991 Cardboard Dreams set, the artwork is in the range of "better than the average person could do, but not necessarily great." 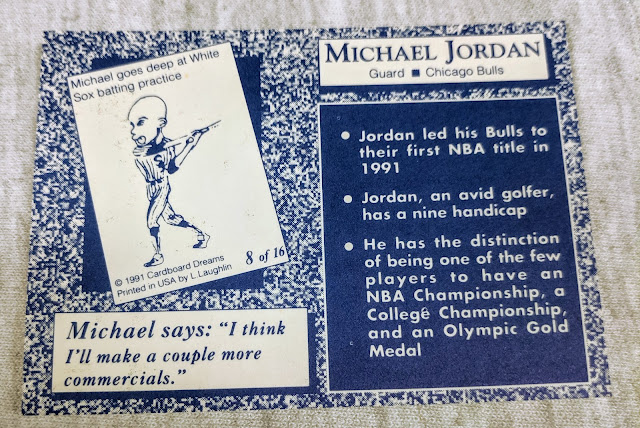 And here's the back. Cute (?) doodle of a helmet-less Jordan taking a cut for the Pale Hose.

Here's where I'd normally do some research/writing about the subject of the card, but at this point there's nothing more I can say about Michael Jordan that hasn't already been said. A very, very good basketball playing man. Possibly would have eventually been good at baseball had the '94 strike not thrown a wrench in his rapid progress.

With that out of the way, now's the time in the "ignorable filler post" where I ramble about whatever. Ooh, these posts are fun for me. Just spew out whatever I'm feeling at the moment.

I've seen a few bloggers saying that during this health crisis, they are reluctant to trade because they don't want to have to go to the post office to mail cards. Well, please allow me to present a reminder plug for the Definitive Guide to Shipping Sports Cards Safely and Cheaply I did back in 2018. It's got you covered for the best ways to send out packages (and PWEs) without ever having to step inside a post office. Check it out! Maybe some of you old-fashioned guys were reluctant to get on board back then, but now with the whole virus thing, perhaps you're ready to take the plunge and stop waiting in line. 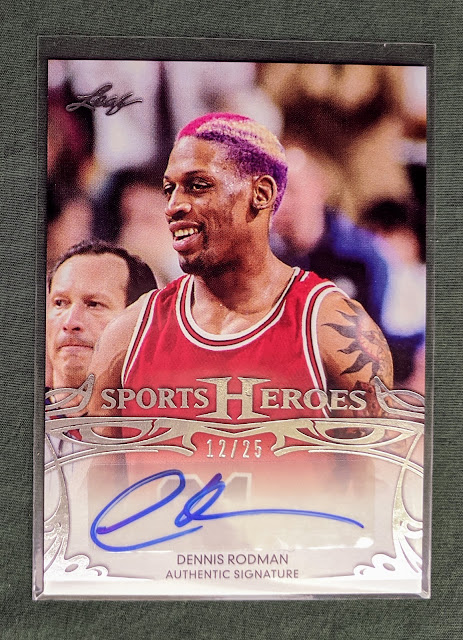 The closest thing I've got currently is a Dennis Rodman stickergraph I picked up years back, mostly because of its 12/25 serial numbering. It's not much for penmanship, but still a neat card in my Christmas Card collection. I couldn't find it mentioned while searching my blog's archives, so either I never got around to posting it, or Blogger's search function wasn't working properly (which happens sometimes).

Hey, that's a good segue to rant about Blogger for a bit!

Ok, when I first started drafting this post a week+ ago I had plenty to rant about, because I had been forced onto the "New Blogger" and it suuucks. But then I eventually figured out how to revert back to the old Blogger and everything's good for now. But if you're tempted to click the "Try the new Blogger" button.. don't. Or if you do, be sure to then also click the button to "give feedback" to Blogger to tell them how much the new version sucks so hopefully they go back to the drawing board and fix all the issues (issues that the new version created that are "fixed" by the old version) and hopefully all us Blogger-cardbloggers don't get forced into permanently using the terrible new version. I really hate it. It's like blogging with one hand tied behind your back. 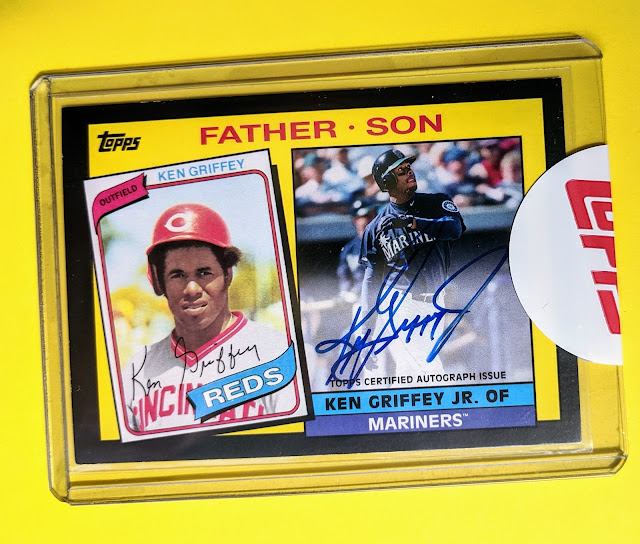 With the hobby being bonkers right now (mostly MJ and Project 2020 lifting the waters), figured I'd give another shot at selling my all-time best pull, a 1/1 Ken Griffey Jr auto. Optimistically asking $5k but open to hear offers or intriguing trade propositions. 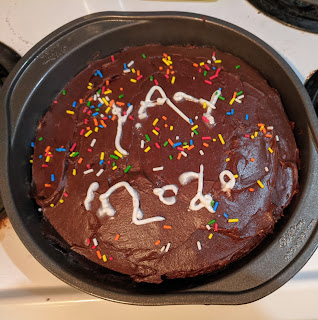 It's gone now. Eaten in 3 days. Surprisingly I haven't noticeably put on any weight during this crisis even though I haven't been to the gym since mid March. Been riding my bike a few times a week, though. That's something. 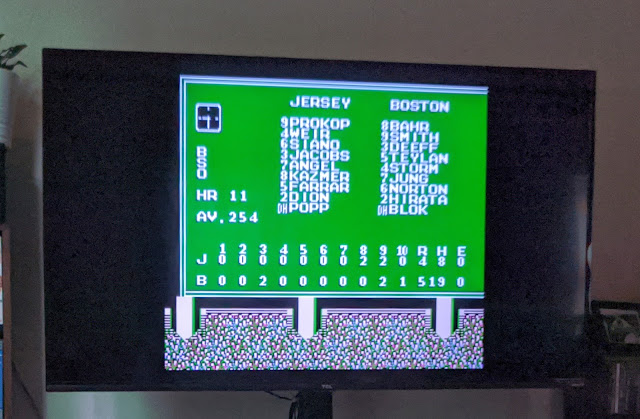 I'm not much for sports video games, but the one I've always loved is Bases Loaded 2 for the original Nintendo. I've been playing through a season this year (not quite the real thing, but it's something!) and the other day I hit a walkoff dinger in the bottom of the 10th. Woot! Left a lot of guys on base, but managed to come out on top. 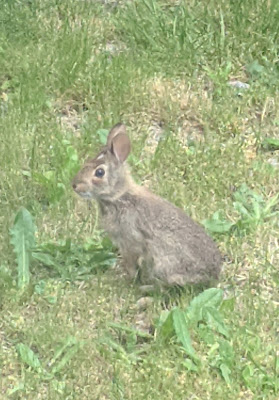 Oh! There's been a baby bunny stopping by our backyard recently. Super cute.
I call it Moon Child due to the white marking on its forehead. 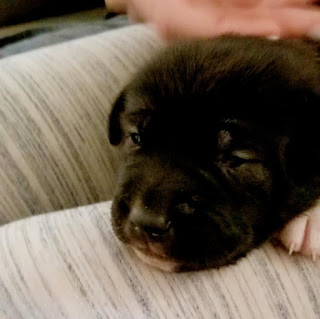 Speaking of cute critters, looks like we've got a line on a new puppers finally, but it'll be a few more weeks till we get it since it's not old enough to leave its mama yet. No rush! Hopefully that all works out. 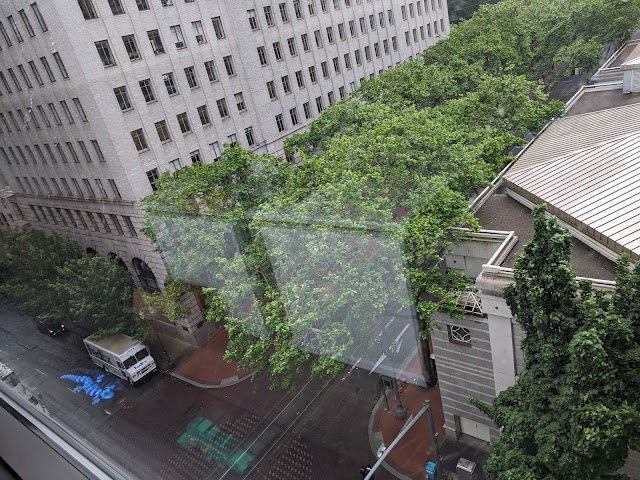 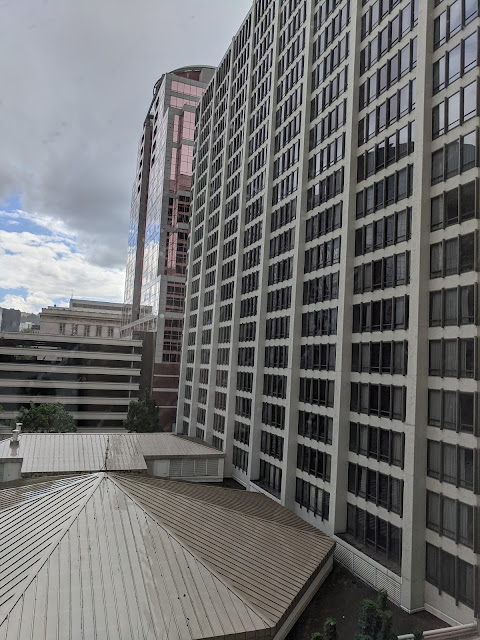 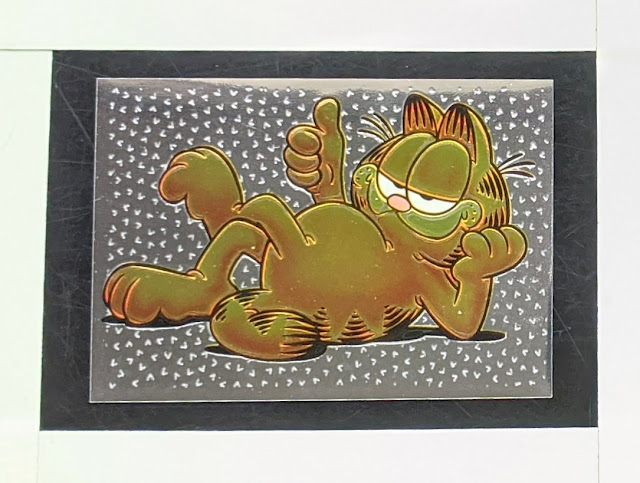 I bought a Garfield card. Can you guess why? 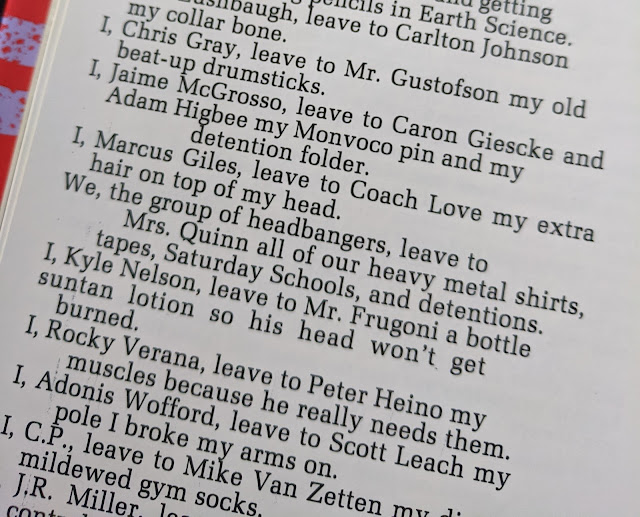 Snipped from my 8th grade yearbook. Coach Love was a sweetheart PE instructor. Lost an ear to cancer, which was kinda creepy for us kids at first, but we all grew be fans of the guy pretty quickly. 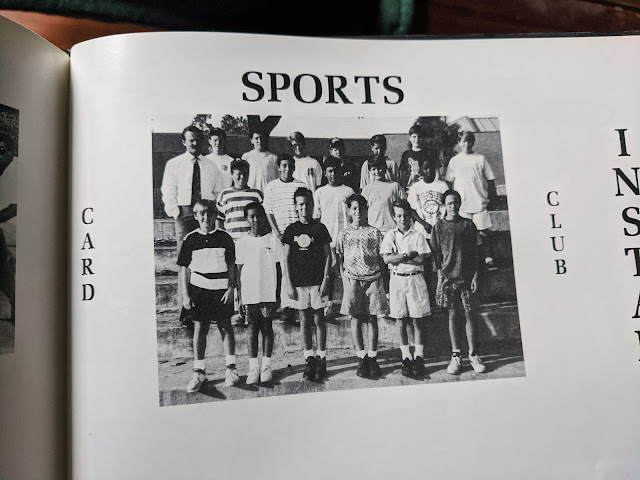 I've got regret over not being a part of my 8th grade Sports Card Club. Don't recall being aware of it at the time. I wonder if any of these guys still collect. Maybe one or two of them have even browsed my blog at some point? Only guy I could name off the top of my head is Clayton, the kid in the back far left. Don't know the teacher. 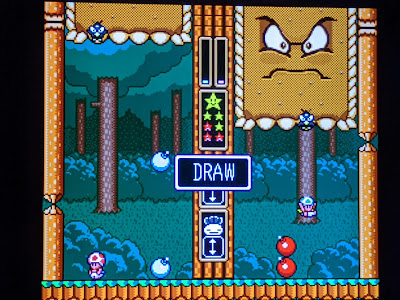 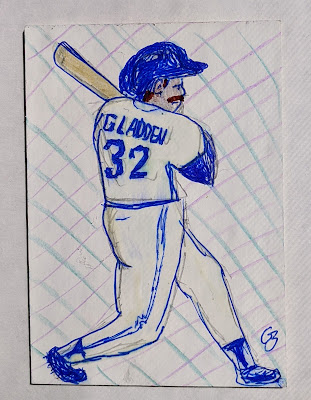 My latest sketch card. I made this for mr. haverkamp. It's supposed to be Dan Gladden on the Giants. I probably shouldn't have used a blue pen, but let's pretend it's a throwback Seals uniform or someshit. 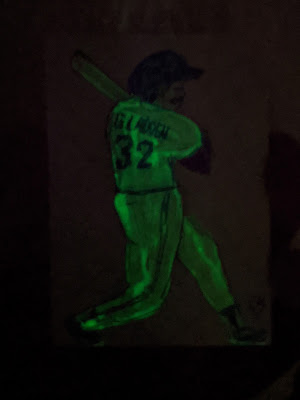 It glows in the dark a little. 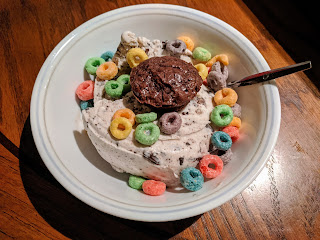 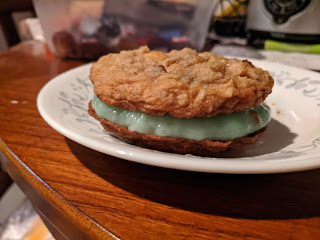 I'm generally not the type of person who takes pictures of their food, but a couple recent deserts creations of mine warranted it. The first one is cookies n cream ice cream with a brownie bite and some Froot Loops. The second one is an oatmeal cookie sandwich with pistachio pudding filling. Both very tasty.

Thanks for reading this ignorable filler post!
Posted by defgav at 12:39 AM