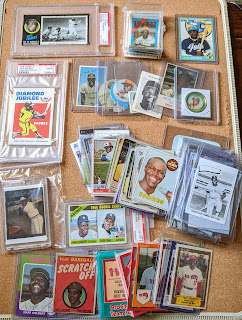 I last showed off my Nate Colbert PC way back in 2014. It's the big guy's 74th birthday today, so figured I'd celebrate by checking in with what I've got from him. I briefly toyed with supercollecting Nate, still the Padres' career home run leader, back in the day, but gave up on that endeavor after a while because supercollecting is a pain and expensive. But I still pick up a cool item for the PC once in a while.

Let's check it out! This is the Colbert Report. 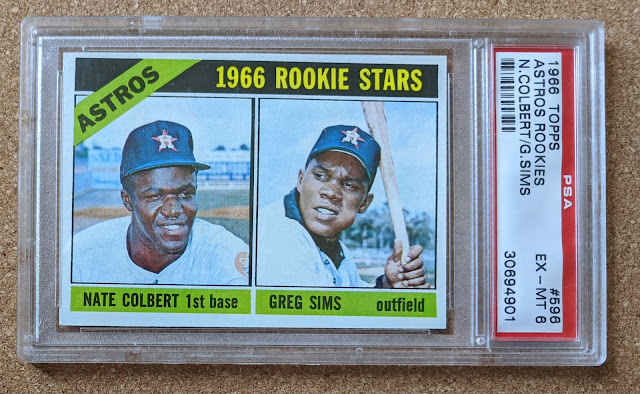 Rookie card! It's a high-number '66, so that jacks up the price a bit. I ended up with a graded one. Cool. 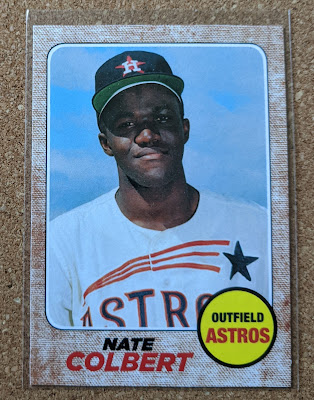 Here's his '68 Topps card. Nah, I'm yanking your chain. Nate actually didn't get a card in 1968, not breaking into a big league lineup yet. This is a custom Bru made last year. 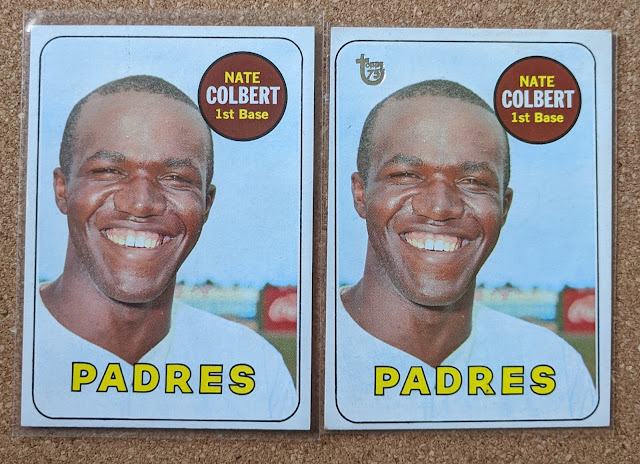 His first real solo card was 1969 Topps. Padres got him in the expansion draft to be the big bopper in their inaugural lineup. 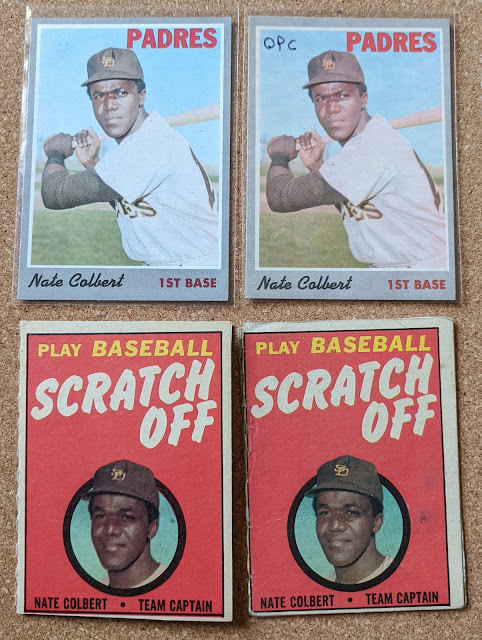 1970 Topps is a nice looking card. I'm confused if these Scratch Off things are from 1970 or 1971, but here they are. I count these 2 as different because of the following... 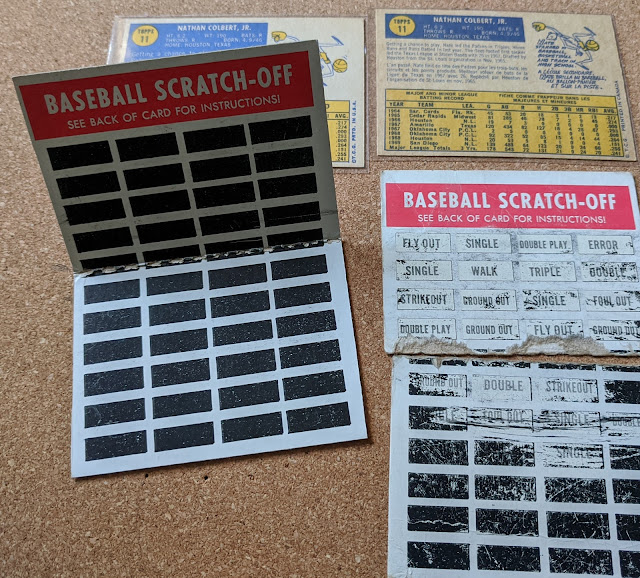 One is scratched off (mostly) while the other is still in more or less "like new" condition. 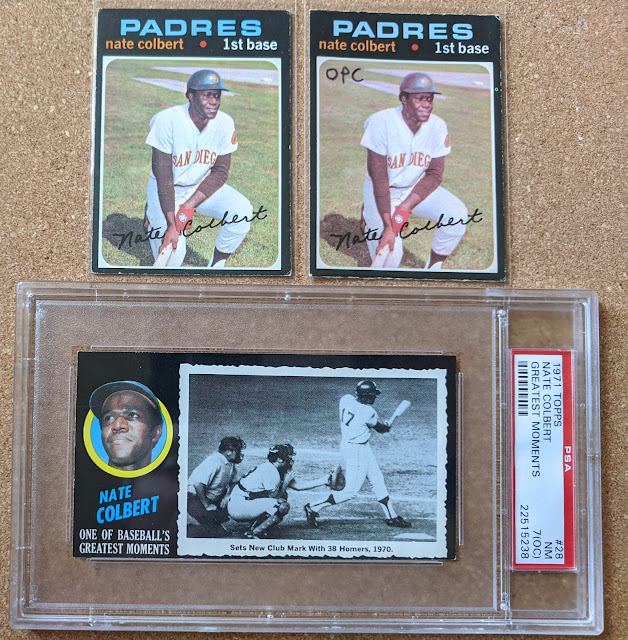 Check out this trio of black-bordered cards they put out in 1971. Great stuff! 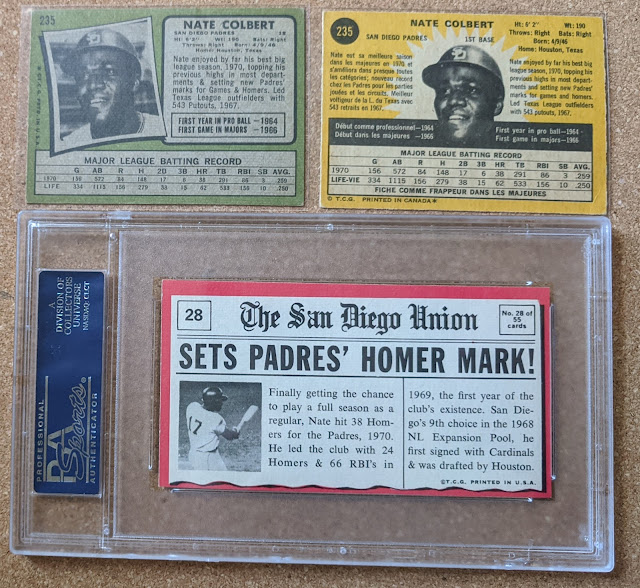 Bonus look at the backs. 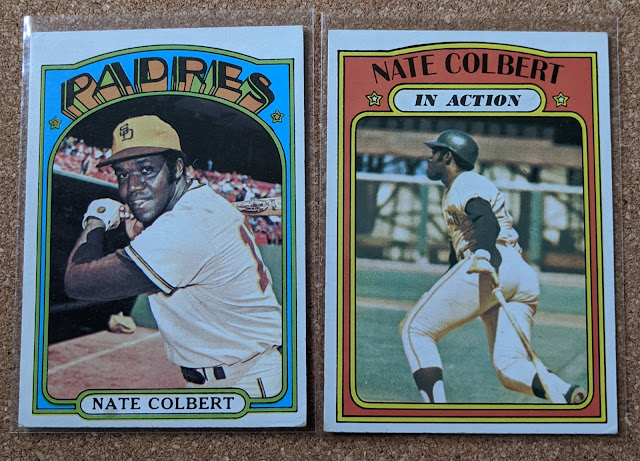 Ooh baby! Three great cards from 1973. The middle one was autographed long ago.

You're not seeing double. You're seeing triple!!! (or are you...?) Different cards all. 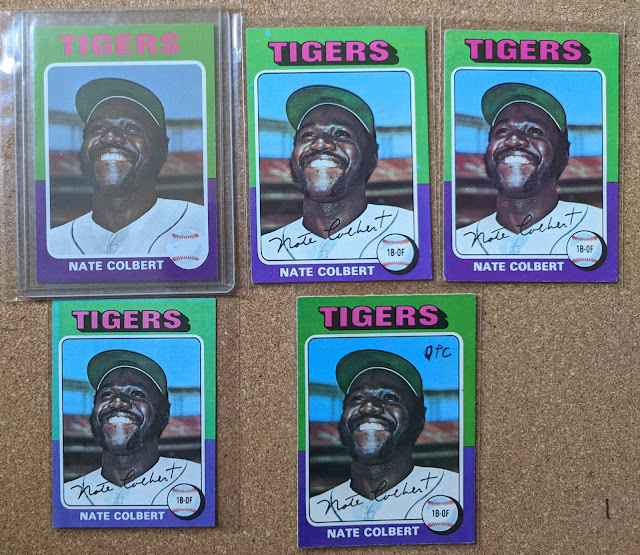 1975 OVERLOAD is what I title this above image. The first card is a proof that's missing the black ink. That's the kind of shit you have to buy when you're a supercollector, and they're usually priced.. well, you know, not cheap. The card on the far right is just a dupe but I kinda count it different because of a couple printing flaws on it. You know you're really serious about being a player collector when you hang onto cards that are really dupes but there's a tiny printing difference so you count it as a different card. Bottom row is the mini version (weird printing issues in its own right) and the OPC card (here mislabeled "QPC" because the pen gave me trouble. BTW, of course I'm only writing on the sleeves, and very gently at that!) 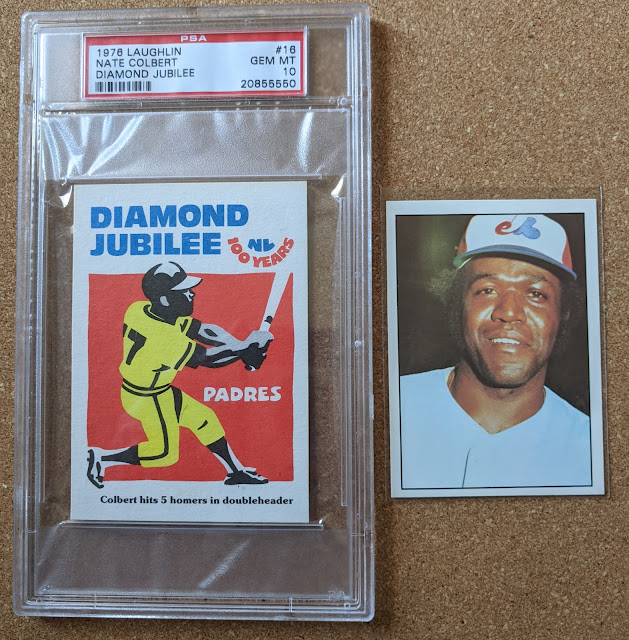 Nate got a couple cards in 1976 besides his Topps card. (More old oddballs will be covered later in this post.) 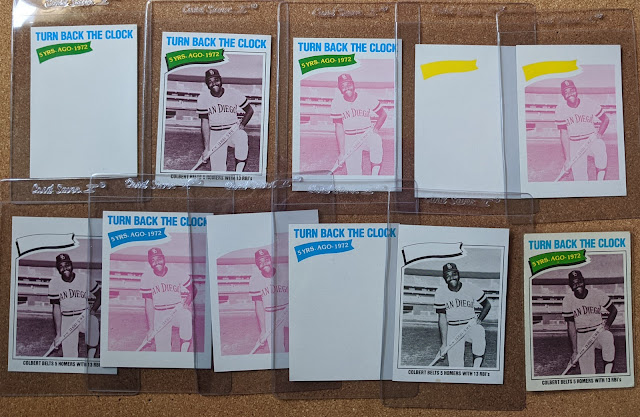 If someone were to ask me if I have Nate Colbert's 1977 Topps "Turn Back The Clock" card, I would have to scream the word yes at the top of my lungs. Just look at all these! It's ridiculous. These are a bunch of different proof cards (another thing I bought during the brief stretch I was trying to be a Nate Colbert supercollector). The card on the end is the regular card. 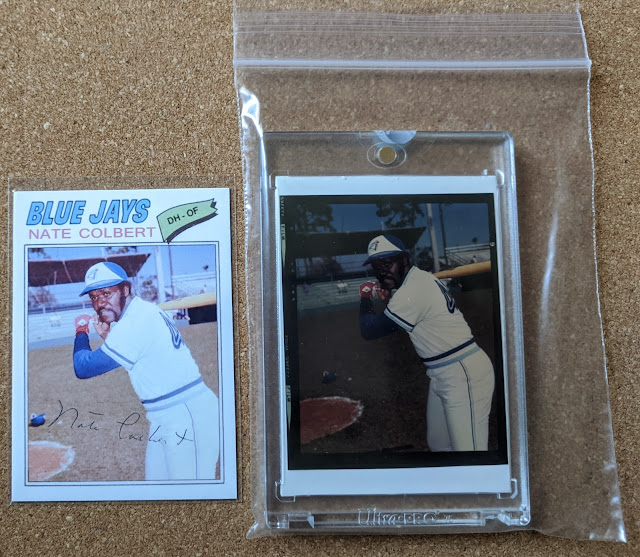 Nate didn't get a base card in the 1977 Topps set, sadly. So I made this custom using a photo from a Topps photo negative that I myself actually own. I thought that was pretty neat. 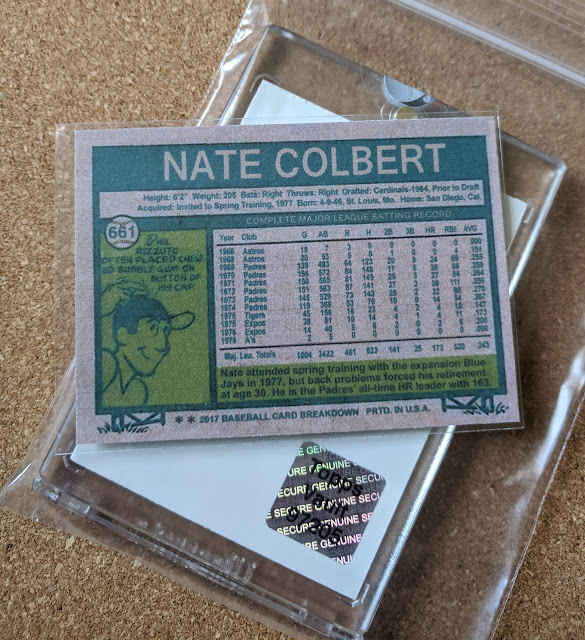 Sunset card! Full career stats on the back!

I need to make a custom of him in a A's uniform one of these days. Don't have any cards from his time in Oakland (eerily similar to a couple other favorite players of mine, Willie McCovey and Dick Allen.. Topps dropped the ball on A's short-term stops of the mid 70s.) 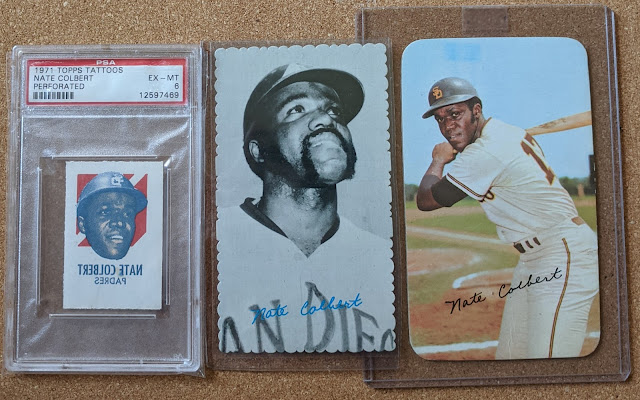 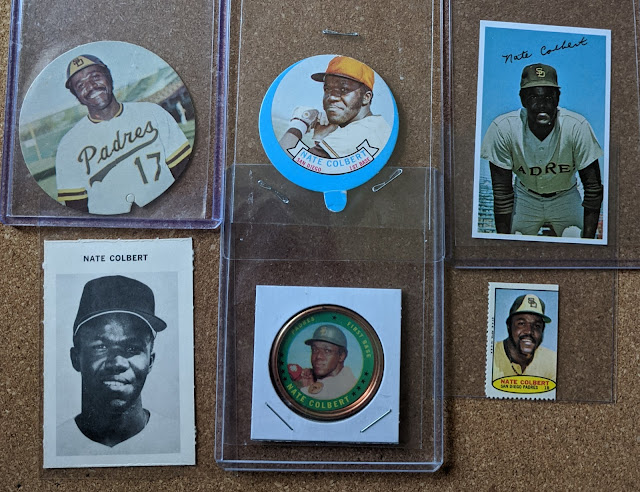 Oh my! Vintage oddballs at their finest! 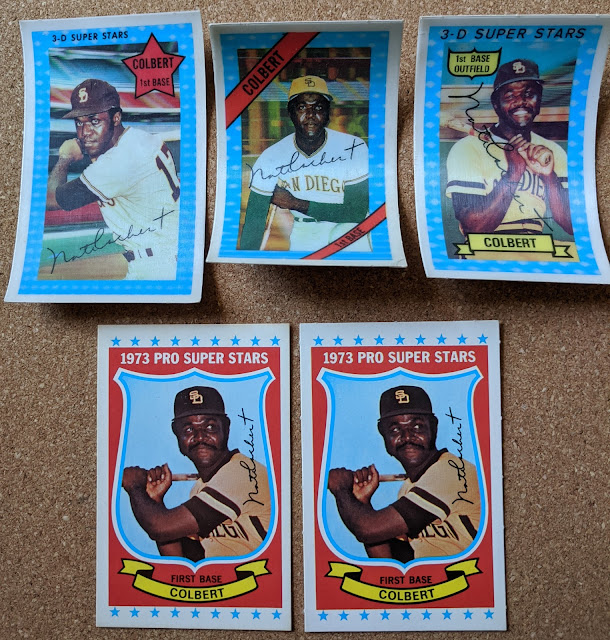 Kellogg's! Love, love, love. At first I was happy to take that dupe out to put towards my setbuild I'd like to get going. But then I noticed they were different. Notice it? One is perforated and one is clean cut on the edges. Count it: Different card! 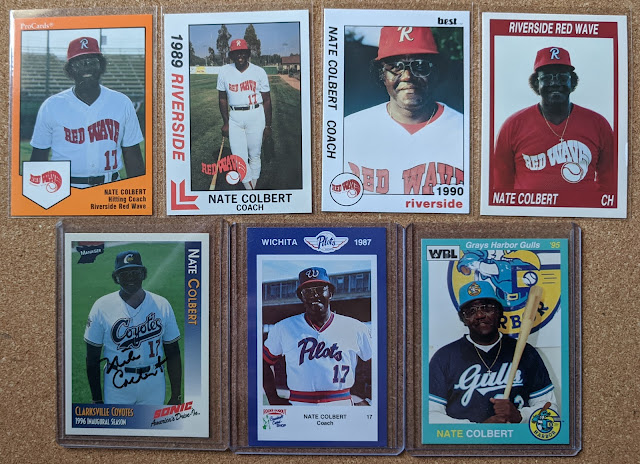 Nate went into coaching after his playing days, and he has several minor league issues. 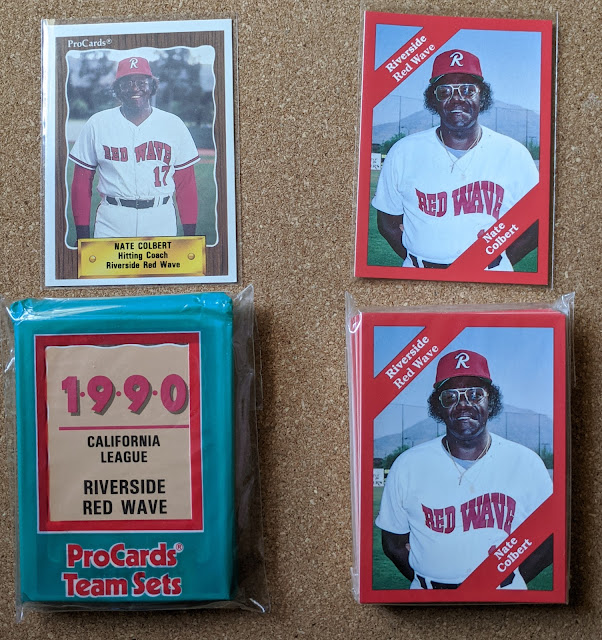 On these, I've got both a "single" and an uncirculated team set that includes the card. Some might call that a dupe. A true player-collector? Count it: different card (even if it's not). 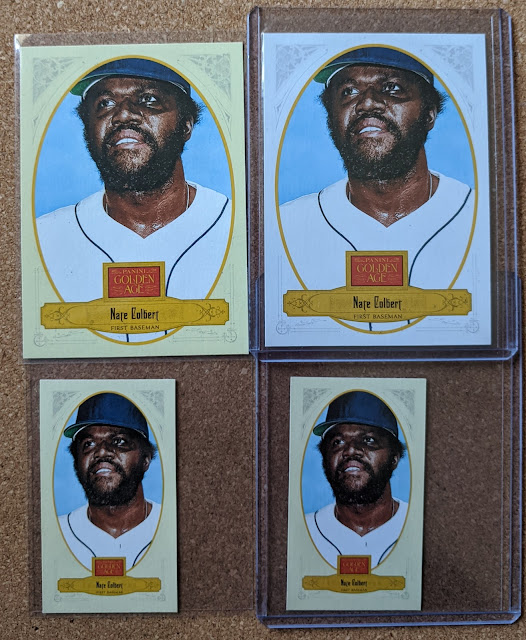 Panini was cool enough to include Nate in a Golden Age set a few years back. There's a few parallels to chase there. 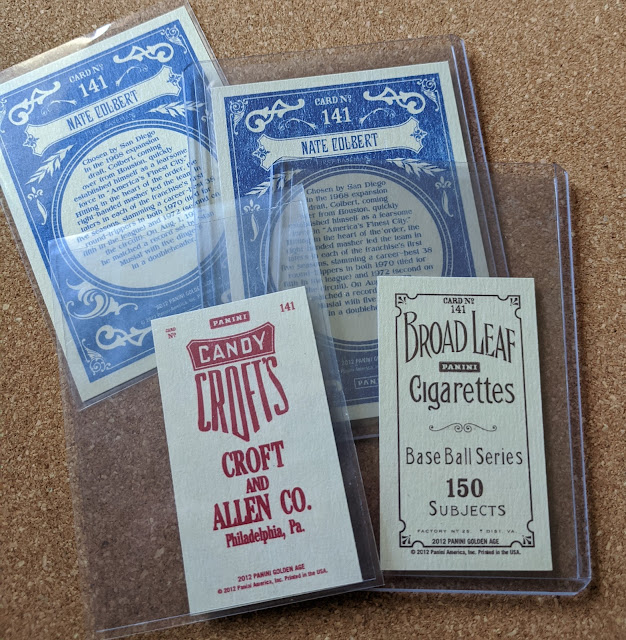 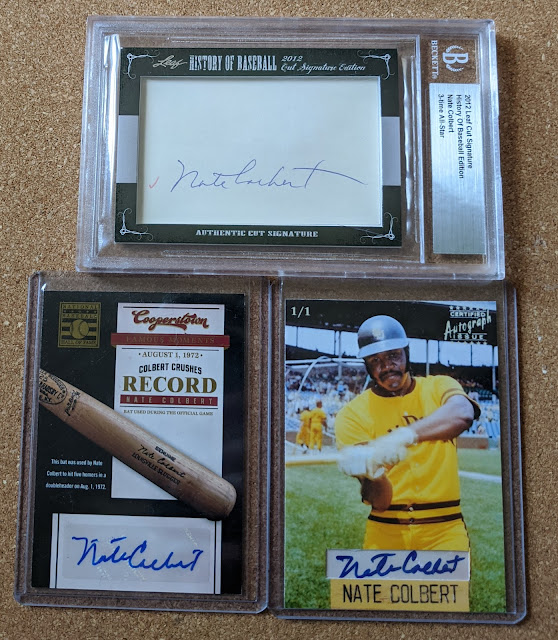 Closing out the post with the hits! Three certified autos. The bottom ones are actually two of the same card, but the one on the right has a custom overlay I made over it.

That's the end. Thanks for reading!
Posted by defgav at 7:26 PM