Progress with Kellogg's + starting yet another vintage setbuild 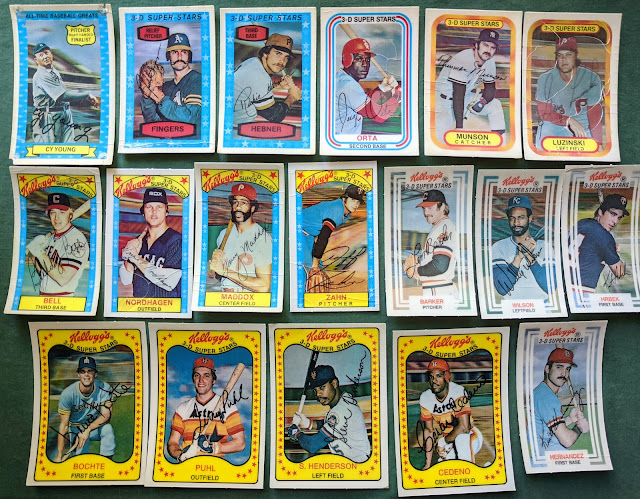 Fuji is a friendly guy and he doesn't like using the word "trade" very often.. He just sometimes sends out cards and/or gets cards sent to him. I was on the receiving end of some of his Kellogg's dupes that he found from my wantlists. Much appreciated, Fuji! Highlights here include Rollie and Munson. 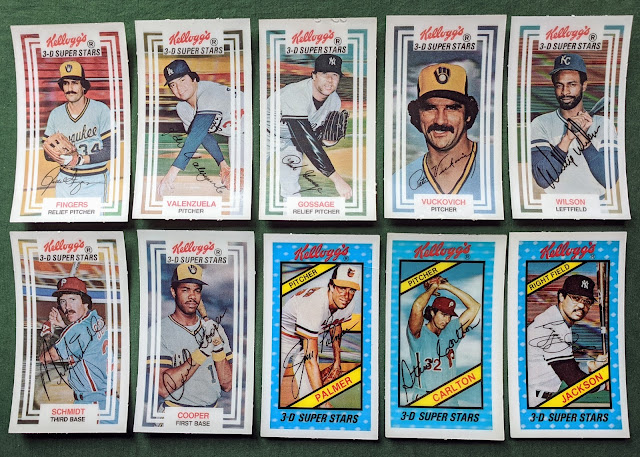 Geez, all these Kellogg's are making me hungry for Frosted Flakes. lol

Reader John Patrick got in touch about some available Kellogg's cards he had, and I was able to round up some 1980 Topps needs of his to achieve a deal. Lots of big names here, and in nice uncracked condition for the most part. I'm just 4 cards away from the '80K set now, with only Nolan, Yaz, Garvey, and Jack Clark standing in the way of my first completed Kellogg's set.

Next is a second trade with reader Michael Y. following up our initial swap back in June. He sent me a solid selection of upgrades and needs for various old sets I'm working on (I absentmindedly put them away before taking photos, sorry.) But the real gem of the package was a starter lot of 1959 Topps. It's a set that's long been in the back of my mind as a set I'd like to probably build someday, but was waiting till I finished off some of the other many sets I'm currently working on, or at least stumble into a starter lot to help get me off the ground. 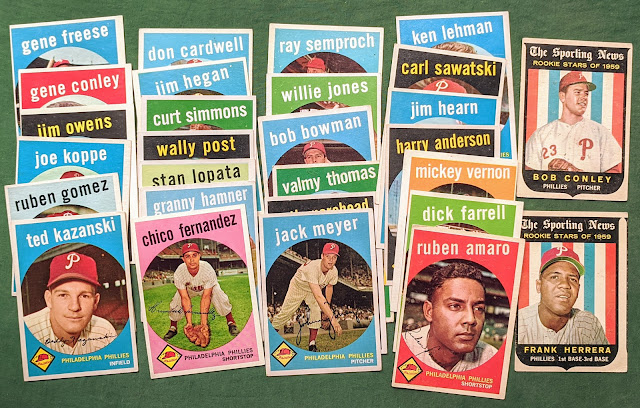 And here we go! I think '59s look best with a bunch of them together, which is why I plan to build this set in a binder (I'm typically a box guy). 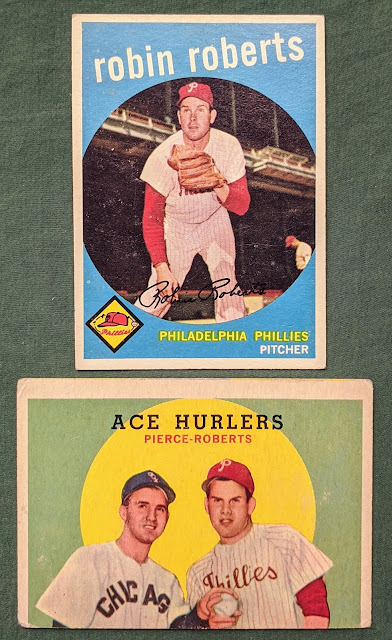 The biggest name in the lot is Hall of Fame hurler Robin Roberts, with both a base card plus a subset pairing with Billy Pierce.

This lot from Michael more or less doubles the amount of 1959 Topps cards I have, so I figure it's finally time to put together a spreadsheet, thereby officially kicking off the setbuild:

Here's where I'm starting at:

Woo! I was hoping I would be in double-digits complete for this first weigh-in. Just made it at 10½% of the way to the finish line.

This is going to be a low-priority, back-burning setbuild which I won't be finishing any time soon, if ever, but at least I've got my needs up now. I pride myself on having a huge wantlist, after all. Perhaps someday once I finish the likes of '57, '64, '70, and '72, I'll then focus more on '59. I have none of the big cards.. not even a Mantle I can loan out from the PC like I do with my other vintage sets. I plan to give myself a break by not going after any of the variations.. just 1 of each card number will do. If I end up with any variations, I plan to stash them at the end of the binder.

So yeah, if you happen to have any '59s available, I'd love to try working out a trade.

Thanks for reading and have a great weekend.
Posted by defgav at 4:51 PM