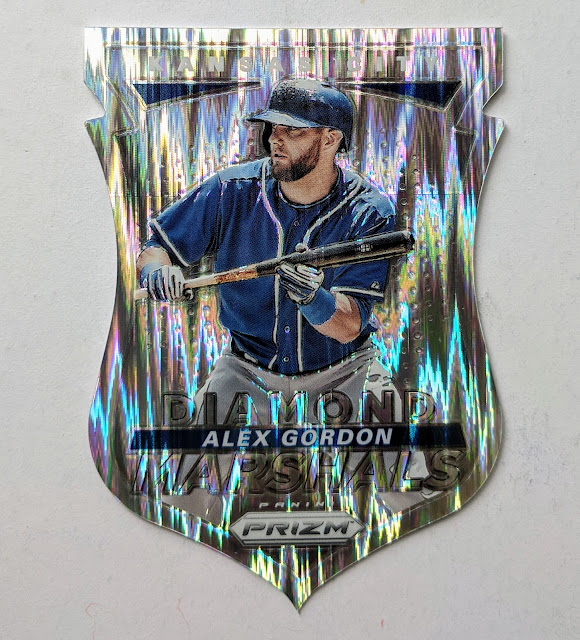 Aw man, just read that Alex Gordon announced he's retiring. I was out of the hobby back when he was a big deal as the 2nd overall pick in 2005 so I wasn't tainted by all the hype and following bust, but then when I was paying attention around 2014, 2015 when the Royals were really good, Alex Gordon found his way onto my wantlist and I put together a modest player collection of the guy. In recent years, his stats declined (offensively, at least-- he remained an excellent defensive outfielder) and he found his way off my wantlist.. but I haven't disbanded the PC, and still don't mind adding to it when his cards fall into my lap.

I saw a cool Andrew McCutchen 2015 Panini Prizm Diamond Marshals "Flash Prizms" parallel on Collecting Cutch a month or two back that caught my eye and wanted one of the things in my personal collection, and so I took a look for a cheap one of a guy I collect and ended up scoring this one above for a couple bucks. It's kinda silly in the grand scheme of things, but the diecut badge is cool and the streaky rainbow shine blasting on the parallel is pretty sweet if you're into that sort of thing as I am. They are numbered out of 100, so not super plentiful.

And as long as I'm showing that off, let's check out my Alex Gordon PC as it stands on this, the day he announced his retirement. While it's kinda sad that he's "turning in his badge", it's cool that he's riding off into the sunset as a career Royal, like George Brett and Frank White before him. 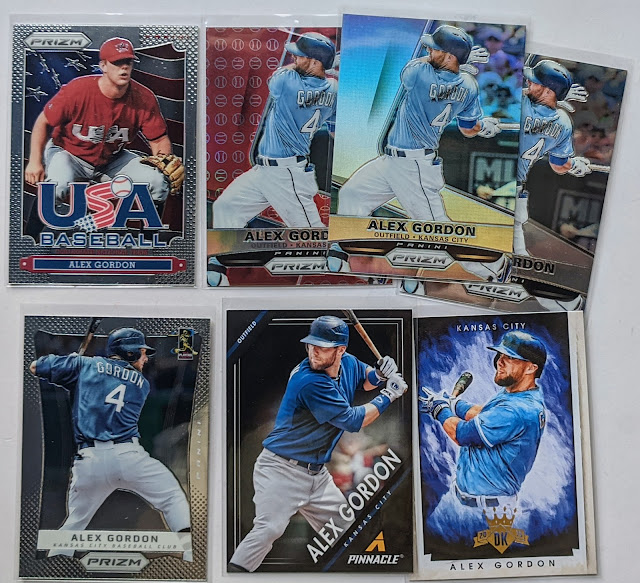 Here are the other Panini cards I've got of him. 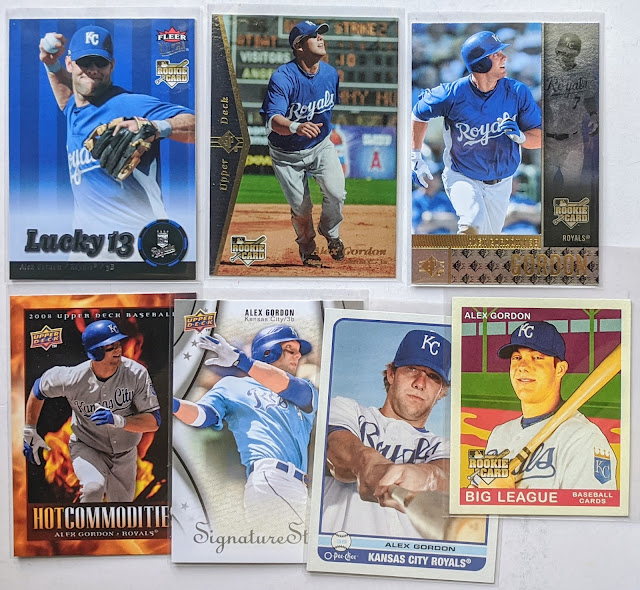 These days, you know a baseball player has been around a long time when he has Upper Deck cards. A few rookies here. 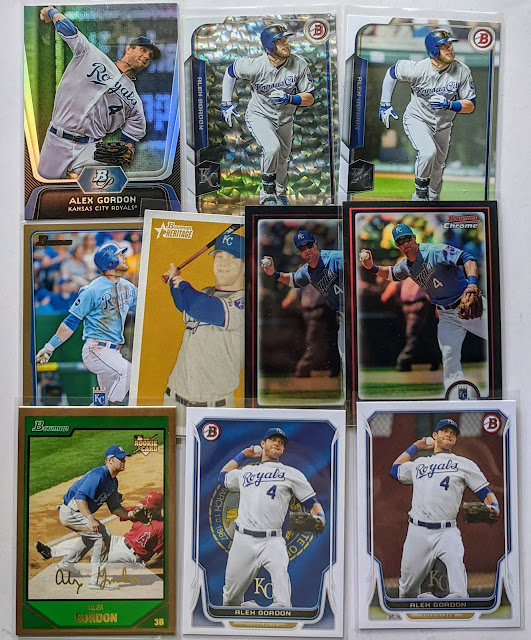 Bowman on display here. Not too shabby. 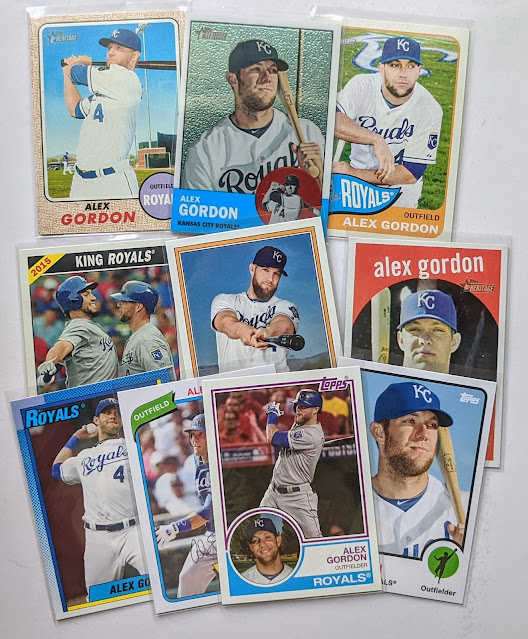 Here is Alex Gordon on some old Topps designs. Looks like a Chrome parallel in there. 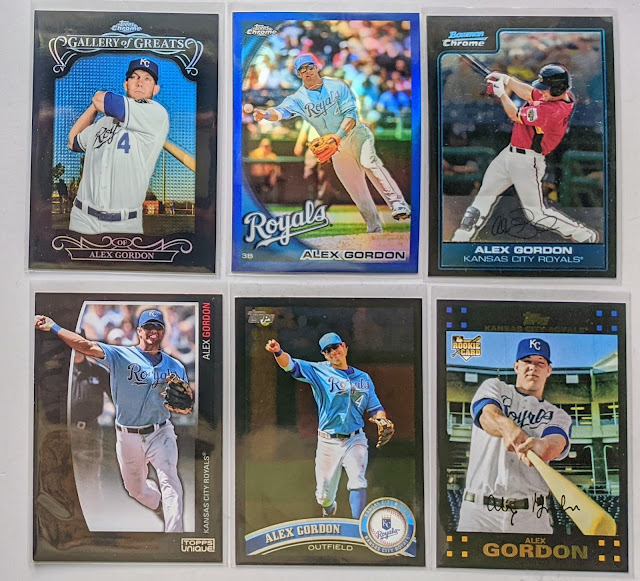 Some cool Topps cards and a Bowman that I missed in the previous picture. That RC is a Sy's Best reprint. I was thinking about now that I didn't have an actual Topps flagship rookie of his, but stay tuned. 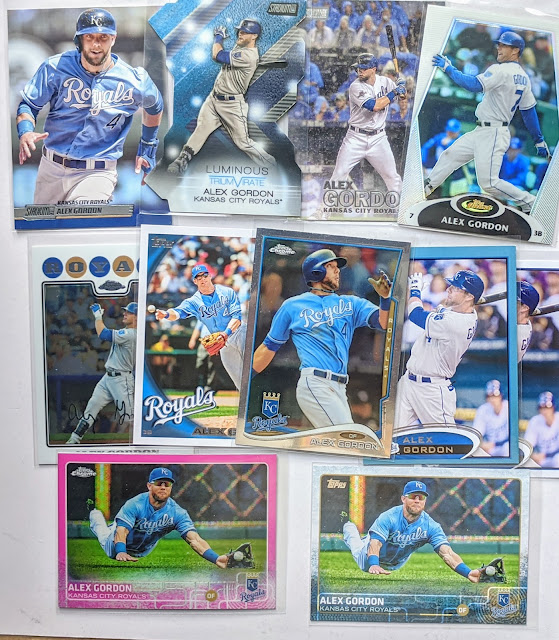 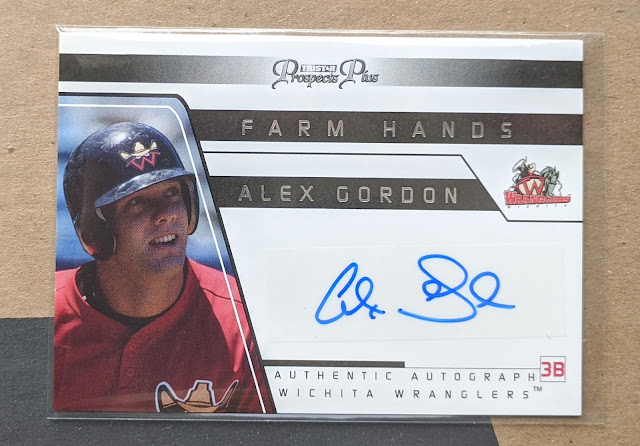 My only real "hit" of his is this unlicensed stickergraph [sad trombone], but someday I wouldn't mind upgrading to a nicer card as the "best" in the PC. 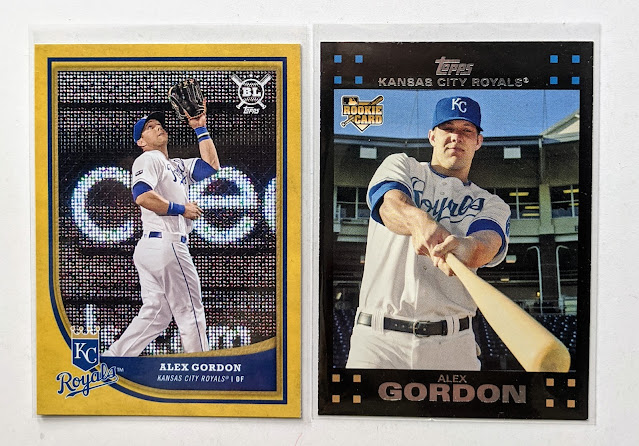 Oh hey, I went looking in my stack of cards of "Active guys I collect that need to be sorted into the PCs" and found these two, and hey, that RC is a real one. Turns out this is the relatively scarce "No Facsimile Signature" variation. Cool! Must've got it in a recent trade that I'm already spacing on. I'm usually not great at remembering which trader sent me what unless it's something really special like the time Daniel sent me a Paul Goldschmidt Christmas Card auto. 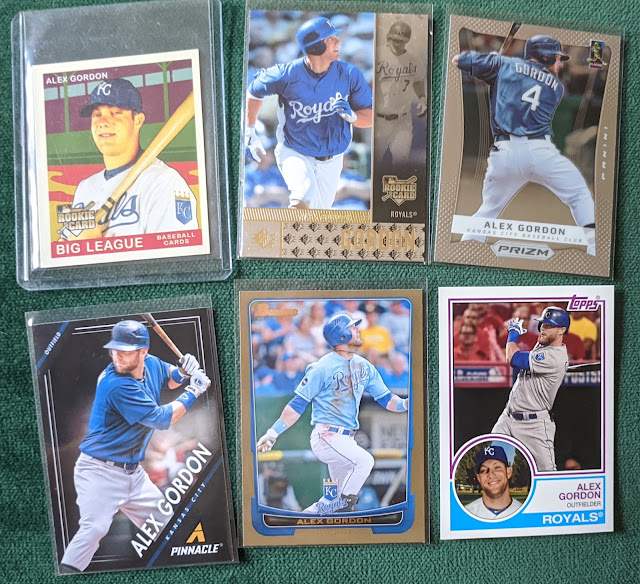 Here are the dupes I was able to sort out of the PC while putting this post together. Available for trade if anyone needs any of them. A couple rookies plus--- get excited basketball fans!!!-- his first Prizm card! $$$$

Thank you for coming to my blog today, kind readers. And wishing all the best to Alex Gordon in his life after marshalling the diamond.