Unfortunately covid kinda put the kibosh on in-person card swaps downtown with fellow Portlander Kerry of the blog Cards on Cards, but there's still the handy USPS to help us out (in exchange for a reasonable fee). 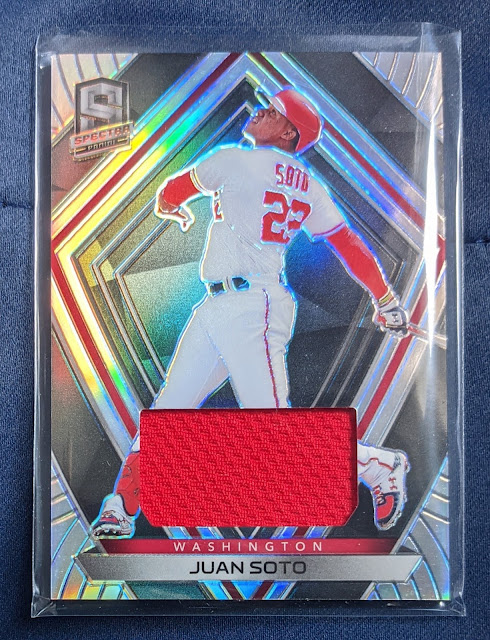 Several terrific highlights in this latest crosstown package, but I gotta give the shiny Juan Soto relic top billing. I've got a respectable little Soto PC, but I think this is the first swatch linked to him in my collection. 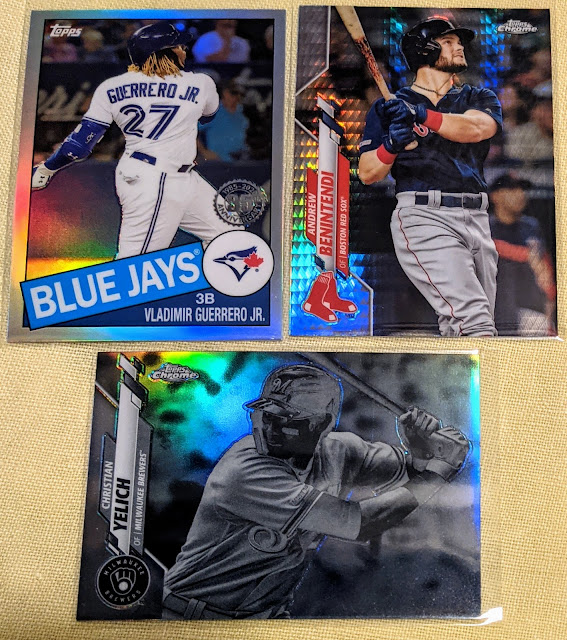 The shine continues on this trio of players who were pretty hot a year or two ago but seemed to cool off this year. Still welcomed in my collection! 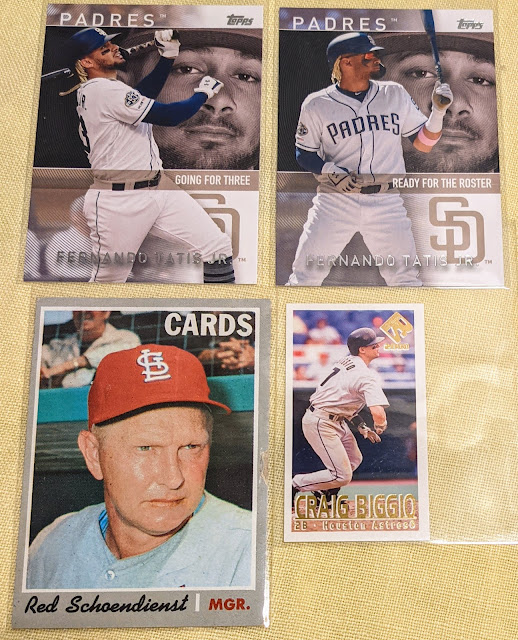 Some "free card friday" picks here. The last batch of cards I got from Kerry included several of those Tatis inserts, but I still needed this pair (There are 30 total of these things, geez). 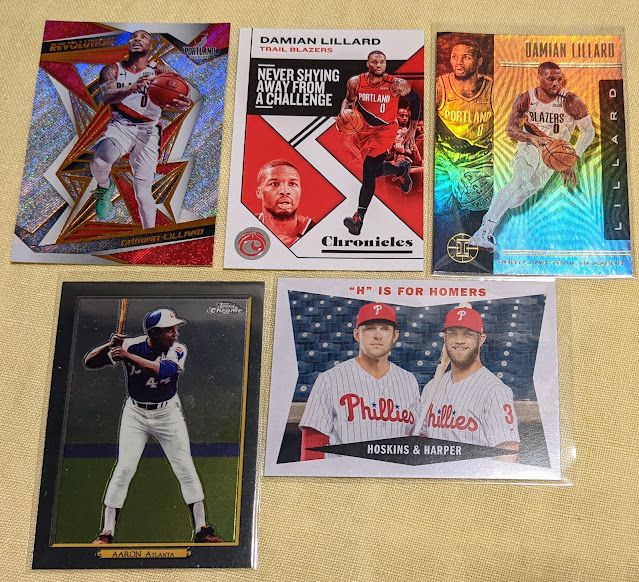 Three additions to my Damian Lillard collection, plus a slick Chrome Hammer and a dilemma of which PC the Phillies card goes to. 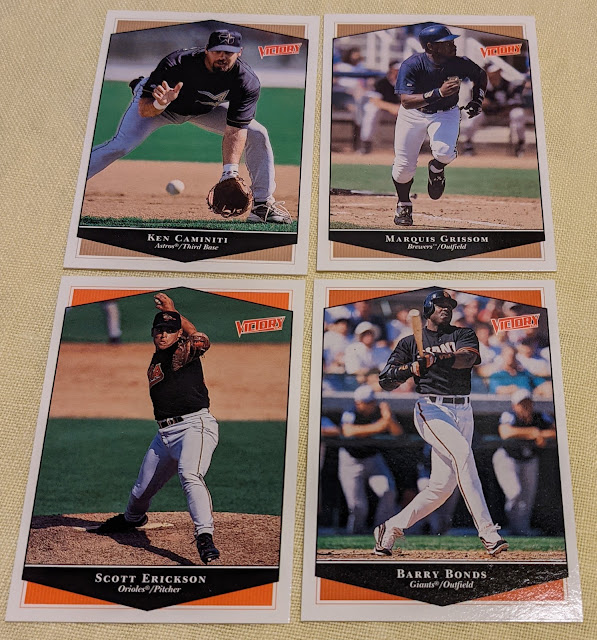 I called dibs on these Victory cards from another Free Card offering a while back. 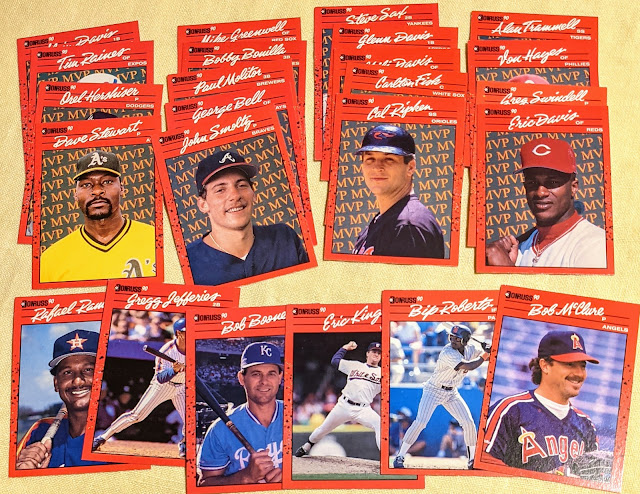 The '90 Donruss lot was a pleasant surprise. Now there's a sentence that very few people have ever said! LOL, but no, I mean it.. would love to put this set to bed before the 30th anniversary year ends. Time's running out for that, but as for base cards, I'm now down to just the Chris Bosio DK (#20) and #276 Paul Kilgus. I think I only had a couple of the MVP inserts before Kerry hooked me up with most of them. I've got 7 more of those left on my wantlist, plus one more Yaz puzzle piece (19+20+21), and all dozen of the Grand Slammers. It's funny, I have the Smoltz MVP error picturing Tom Glavine that I pulled myself way back when, but don't think I ever had the corrected version before this. 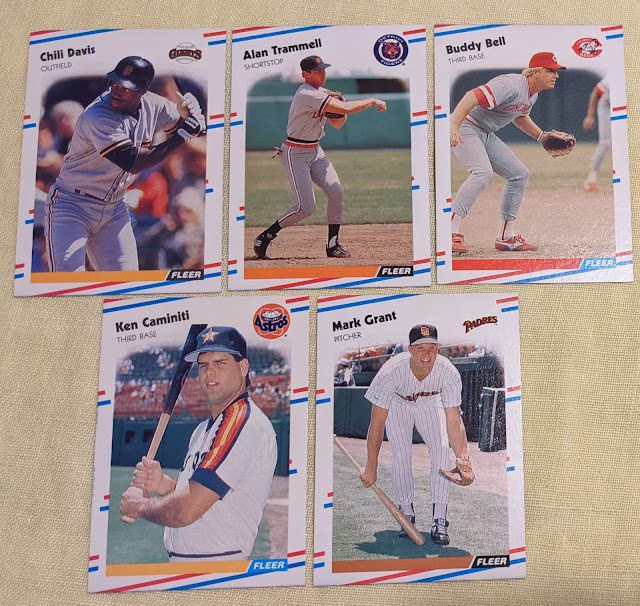 Another "junk" set that I've been trying to complete for the past couple years after receiving a starter lot. Still a handful of '88 Fleer left on my wants, but the end's in sight. Nice bunch here including a Caminiti rookie. I finished '79 Topps recently, but these upgrades are appreciated to help sharpen up my set a bit.

My Xander Bogaerts PC got a surprise boost with an oversized box topper and Chrome parallel, both from 2020 Stadium Club. What a shot of him getting loose on the field before game two of the 2019 MLB London Series against the Yankees at West Ham London Stadium. 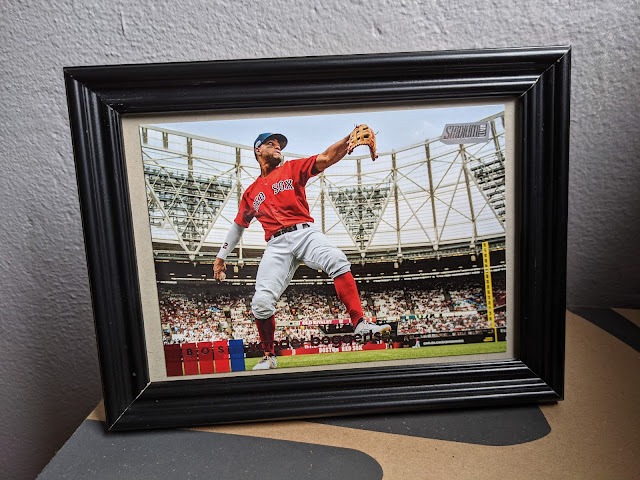 I happened to have a spare frame handy, so I've framed the big one up for now.

Big thanks, Kerry! Eclectic mix of good stuff. I'll get a return over to you soon.