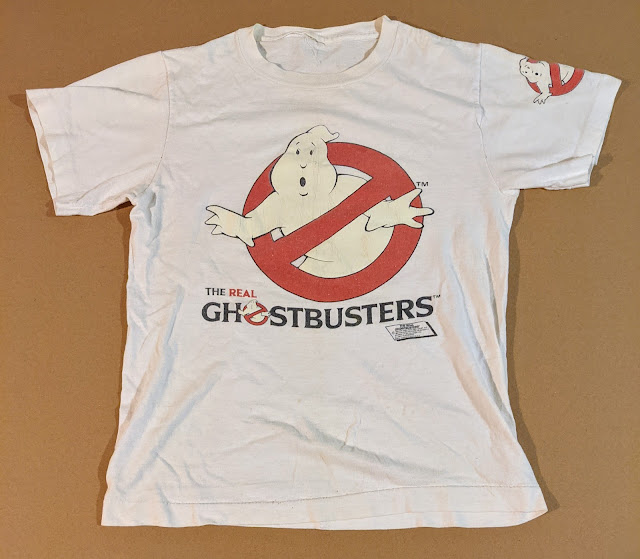 Back in July, posted an old photo of me wearing this shirt at Disneyland in that post about my old best friend Doug moving up to Portland. Quick update on Doug, he's settling in great. Happy to see him already hitting it off with a new ladyfriend. She seems cool, though I haven't met her yet.. damn covid putting a strain on get-togethers. (Doug's ex-wife unfriended me on Facebook soon after they split. WTF? I bit my tongue so many times to keep things cordial with that awful woman, not letting her estrange me from my friend like she did with his family,  and she proves herself to be a c*nt to the end. So glad I don't have to deal with her bullshit ever again.) 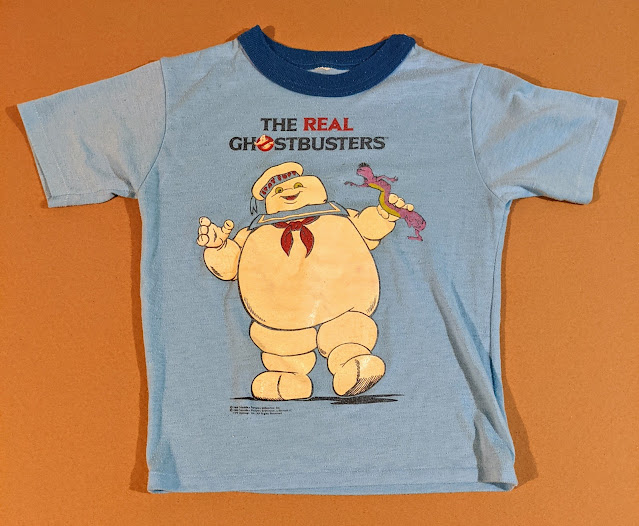 Here's another Ghostbusters shirt. This one is actually an old pajama top. Both these Ghostbusters shirts  glow in the dark , and I've now got them on display in my fledgling Glow-in-the-Dark Museum/Bathroom I've got going in the new house. I'll do a separate post on that one of these days where you'll get a look at them glowing. 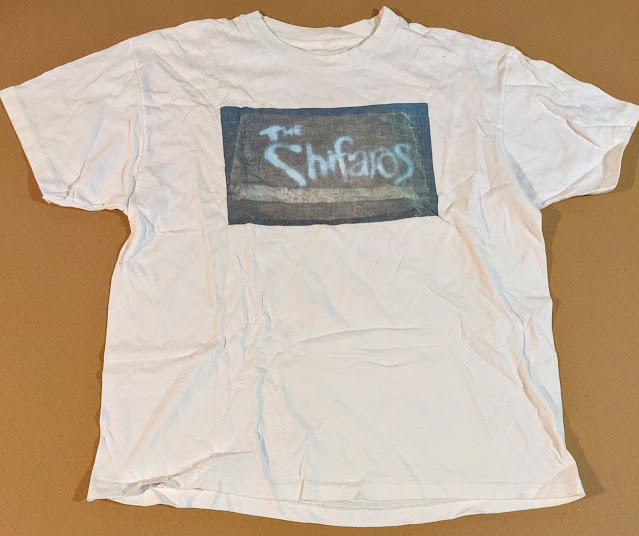 In high school, Doug and I had a band called The Chifaros. And when I say we were a band, I mean we would just bullshit about all the cool/kooky things we wanted to do when we got our band off the ground, while in reality we only jammed music together once in a blue moon, with results that no one would ever want to listen to. But it was fun to dream. At some point I made this shirt with a photo that was slated to be an album cover, probably wearing it to school once or twice. 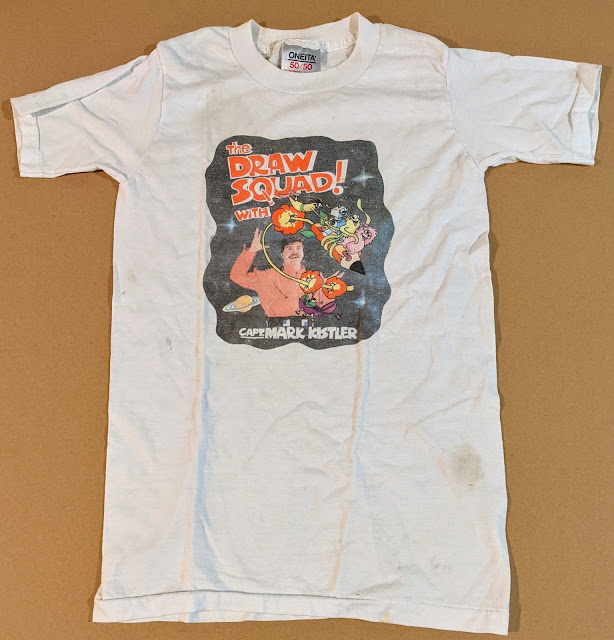 I've mentioned that I was into The Draw Squad with Capt. Mark Kistler (a PBS drawing show) in elementary school a couple times on the blog in the past, including the first Sentimental Sundays post and the story of my first TTM request. I'd still wear this shirt today if only it fit me! 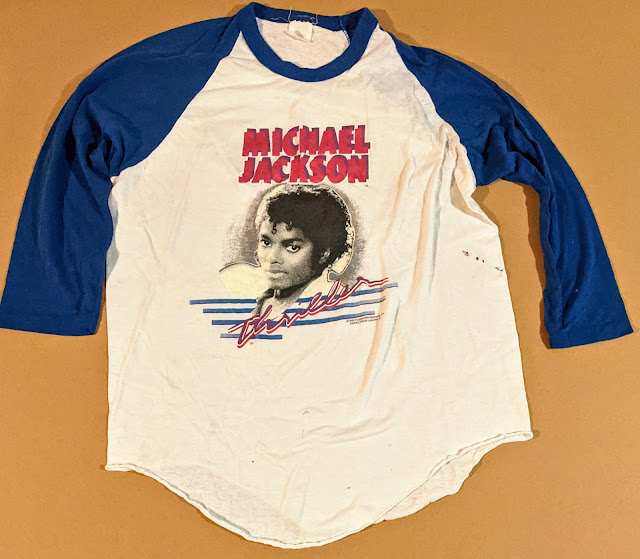 Haha, despite all the baggage surrounding Michael Jackson's legacy, this shirt still makes me laugh. This one actually wasn't mine as a kid, but rather it belonged to Doug. I used to give him a hard time about it (this was circa Nevermind when Michael Jackson wasn't cool anymore-- Doug never wore it much since elementary school, but I think he occasionally wore it as PJs through middle school), and one day I talked him into giving the shirt to me to preserve it rather than let him get rid of it. I think I even wore it ironically once or twice before outgrowing it. 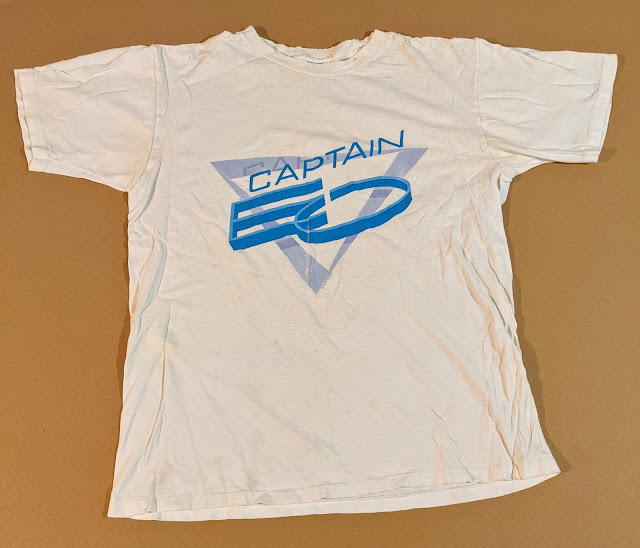 Another Michael Jackson shirt! This one was mine, but not from childhood-- it was a thriftstore find during high school. I actually wore it occasionally before it started getting too frayed around the collar. And it was only semi-ironic, more like an obscure Star Wars reference (well, from the mind of George Lucas). I saw Captain EO at Disneyland back in the day, so it was a nostalgic thing for me. 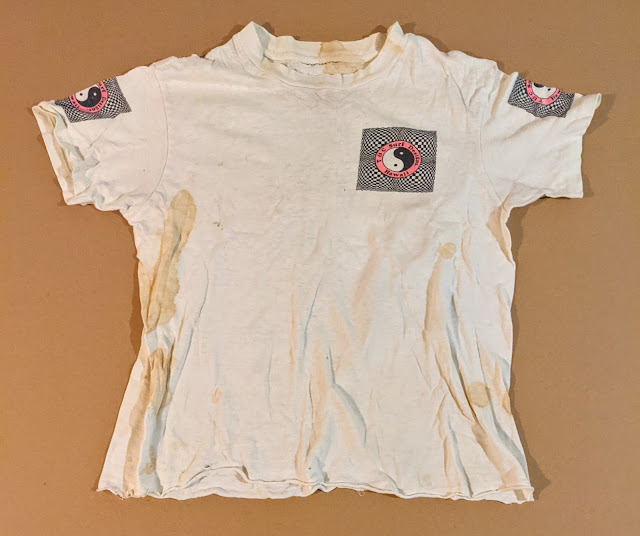 Oh man, this was my coolest shirt as a kid! I remember feeling like a badass when I'd wear it, lol. Not sure if T&C Surf Designs is remembered much today other than maybe for the old NES video game, but back in the day, at least in my So Cal neighborhood, they were among the most respected designer clothes on the schoolyard. See also Stussy, Quicksilver, Rusty, Billabong, and No Fear. 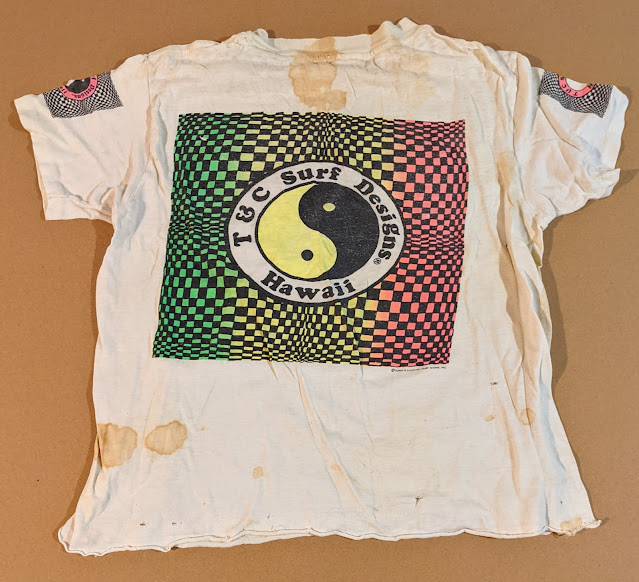 Here's the back. Beautiful, right?! I used this as a rag for a while after retiring it from my rotation, so it's got some stains now. 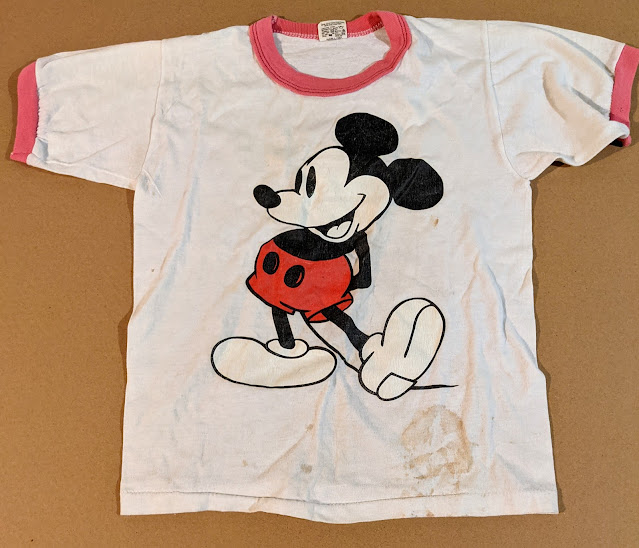 Mickey Mouse. Wore this one a lot in elementary school. 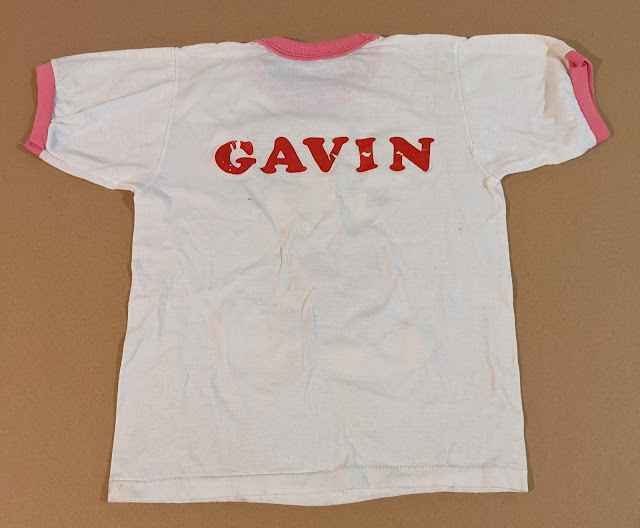 Name ironed onto the back! Gotta love it. 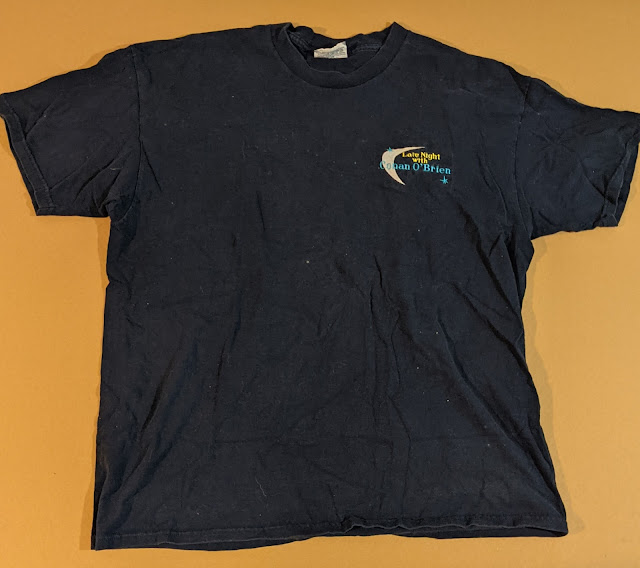 Hey, here's one that could legitimately have a place in a real t-shirt collection. This is an authentic Late Night with Conan O'Brien shirt that I got from an acquaintance who performed on the show.
He was the drummer in Dig. 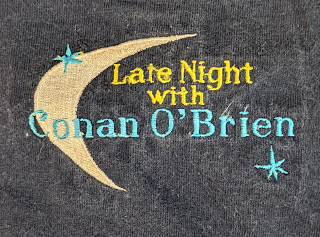 Closer look at the embroidery. I'd say I'm a fan of Conan, though it's been years since I've watched him with any regularity. But yeah, cool to have swag originating from his classic show. 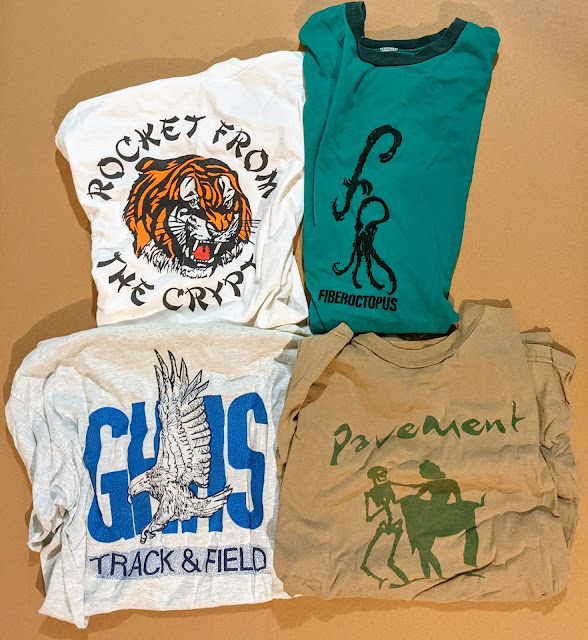 This post is getting long, so we'll cut out with these few more old shirts of mine, each rich with memories.

Do you have any old clothes you don't wear anymore but can't bear to part with?