Made it to 8 years as a blogger. Nice. New banner for the occasion. Had been going with a text-only header for a few months, but now I've made a new header pic in the same vein as one from a few years back, spelling out the blog name with letter patch cards. 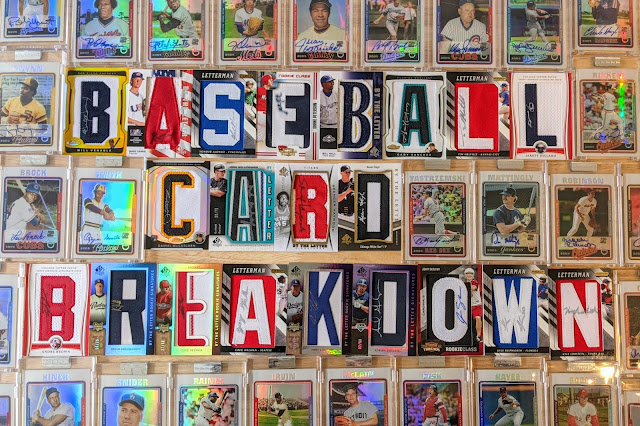 Not sure how long I'll stick with it, but I'll fly it up there for at least a while.
In today's post, I'm going to toast to 8 years of blogging by giving shout-outs to a few of my favorite blogs over that span, linking each of them up to a letter in the new header. 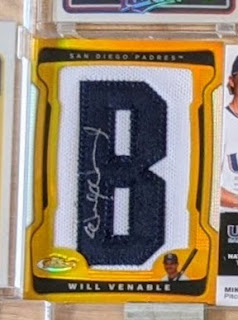 B is for Backstop
[Will Venable]
Looks like Marcus has since taken all the way to the backstop offline, but back in the first few years of my blog, it was so cool to read an active card blog that focused on my hometown Padres. While I've rooted for the team basically all my life, I had sorta turned my back on them for a while there, and Marcus' blog helped reignite my fandom, getting me familiar with the current roster (such as guys like Will Venable) as well as names from the past I hadn't thought about in a long time. He inspired me to add guys like Eric Owens and Khalil Greene to my PC list, and indirectly provided the catalyst for my "Marquis Mania" project where I hoarded a crazy amount of Marquis Grissom 1990 Upper Deck rookie cards. 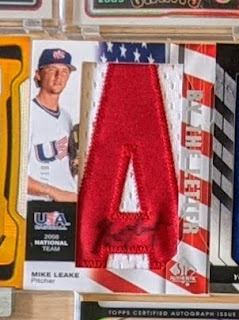 A is for A grand serving of nachos
[Mike Leake]
Mike Leake makes me think of the Reds, and the Reds make me think of Nachos Grande. He's been consistently cranking out posts forever. Usually not too long, but often just a bite-sized look at a particular Barry Larkin card or a few cards from a TCDB trade. Chris seems like a really chill guy. I enjoyed getting in on some of his group breaks back in the day. He's really upped his game with them lately, though I've since sworn off group breaks (no fault of Chris') so I just watch from afar now. I love that he's also a big LEGO guy. 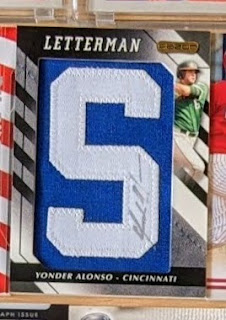 S is for San Jose
[Yonder Alonso]
During his career, Yonder Alonso played for both the A's and the Padres, so let's link him up to Fuji. The Chronicles of Fuji has been a beacon of positivity for the Cardsphere for over a decade now (not even taking into account his tireless commenting on countless blogs, which I know we all appreciate). Mark gave us a scare earlier this year with talk of taking an extended break, but thankfully he seems to have found a balance where he can still crank out a few posts each month. 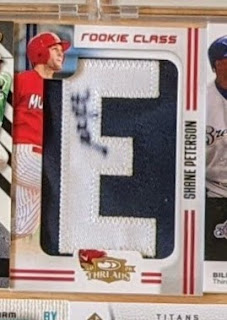 E is for Everybody Loves Shane
[Shane Peterson]
The best known Shane on the cardsphere has got to be the good dude behind the Shoebox Legends blog. In recent months, the blog has been gathering cobwebs, with Shane focusing more on his YouTube channel. That's pretty cool, though I hope the blog doesn't fade away. Always neat following along with his collecting adventures, be it his buyback frankenset, various setbuilds, big Red Sox collection, or whatever else he feels like writing about. 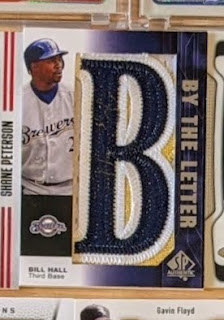 B is for Brew Crew
[Bill Hall]
I'll go with Summer of '74 for this one. Matt Prigge's Brewers-centric cardblog looks like it has tapped out with just 151 posts to its credit, but it was a good one. 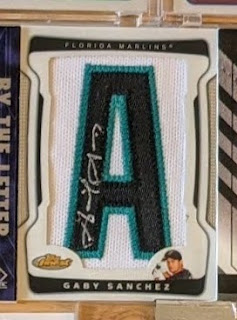 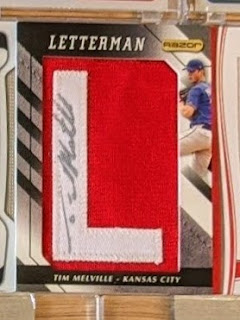 L is for long ago
[Tim Melville]
Hmm, let's see. Tim Melville was drafted by the Royals, and that calls to mind View From the Skybox. Dormant since March 2015 (sadly just missing out on documenting KC's championship season), this blog had a lot of fresh, creative perspective during its 3-year run. I still hold a little grudge regarding a PWE of Gypsy Queen minis I sent the guy that never got reciprocated, but nonetheless have a soft spot in my heart for the glory days of VFTSB. 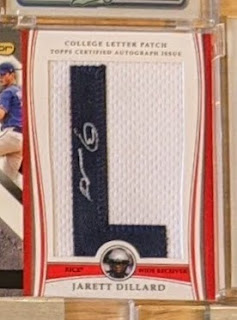 L is for lawyered
[Jarett Dillard]
Wikipedia tells me Jarett went on to become a successful lawyer after his days on the gridiron. That calls to mind Tony L. of Off-Hiatus Baseball Cards. He burst onto the cardblog scene in 2014 with a lot of great posts, and a lot of great trades for those with Brewers cards to send. Over the years, Tony's gotten busy (lawyer stuff and whatnot) and his cache of available cards (mostly from his childhood collection) dried up, so he doesn't post or trade much anymore, effectively going back On-Hiatus, but let's hope he resumes blogging at some point. 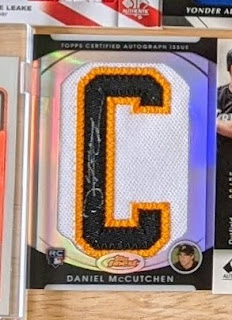 C is for Cutch
[Daniel McCutchen]
Here's an easy card to link to a blog. Different Cutch of course, but Collecting Cutch gives readers a fascinating look into the life of a supercollector. Brian is a great guy and is always thinking up new and interesting framework for his posts, so it's not just "hey, look at this new 1/1 Andrew McCutchen I got". Plus he posts more pictures of pretty ladies than any other cardblog (especially during his annual Save Second Base fundraiser every October), so that's just another reason to keep his blog on your reading list. 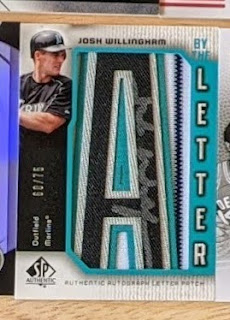 A is for Area 40
[Josh Willingham]
Another no-brainer for linking a blog to the card. Wes Moore has changed course in his collecting focus several times over the years, often changing blog names and usernames along the way. But he's always been a very generous fella and it's a thrill when he gets you in his crosshairs and drops a bunch of cards on you. Who can forget his "war" with Matthew Scott years back where the two went back and forth trying to outdo each other with amazing trade packages? That was a fun stuff. 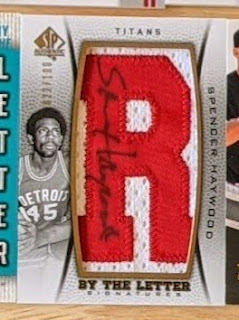 R is for roundball
[Spencer Haywood]
Seeing this is the only basketball card within the header, gotta go with the blog I think of first when it comes to the hardwood: Cardboard History. Billy is known for his comprehensiveness, thoroughly scanning and cataloging his massive collection. Sucks that he has to deal with difficult health issues, but glad he's still able to go on adventures from time to time and take his readers along for the ride with dozens of photographs. 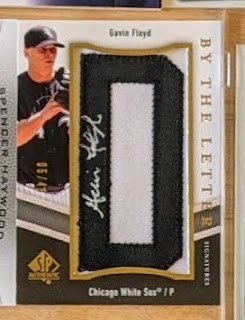 D is for don't ever stop
[Gavin Floyd]
Guess I'll go with Johnny's Trading Spot for this one, as I've traded with John Miller countless times, and there's been at least one Gavin Floyd card in nearly every batch of cards he's ever sent my way. I think John's got a few years on me, but I kinda think of him as a blogging brother of mine, both starting our blogs in the summer of 2013 and both still at it.
We're entering the "BREAKDOWN" part of the header now, and seeing as it's the afternoon of the 15th as I draft this and I want to hurry up and get this post published soon, the rest of these might be cranked out at "lightning round" speed. 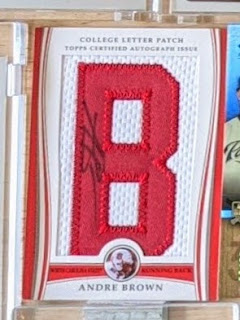 B - Andre Brown
Brown, you say? Bleedin' Brown and Gold is (was?) a good blog. (...though, yes, I'm a homer for Padres blogs.) See also Duff's newer blog Comatoad on Cards. 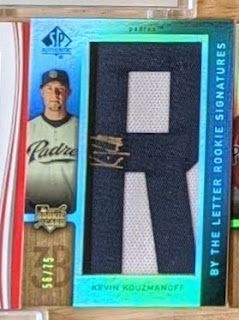 R - Kevin Kouzmanoff
Right back to another great Padres blog: Padrographs. I'm lucky enough to live nearby to Rod, and my card collection is richer for it. Just got another box of cards from him (and a comic book with glow in the dark cover!) last weekend which I'll post about sometime soon. 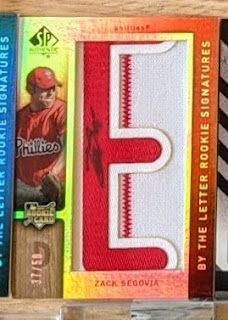 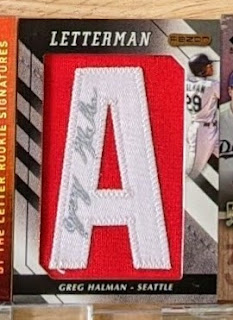 A - Greg Halman
At first thought, I was tempted to go with another Greg here.. but it would seem wrong to have Night Owl represented by a non-Doger. So how about another blogger named Greg (aka GCA) from The Collective Mind. 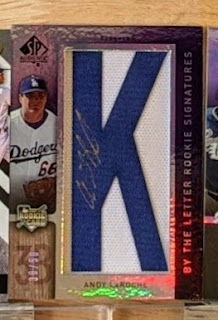 K - Andy LaRoche
K, now here's a Dodgers card. What can I say about Night Owl? Papa Bear of the Cardsphere. He's a professional writer who consistently carves out the time to write interesting, thoughtful blog posts on the regular. Our little online community of collectors is undoubtedly better off for having him as a pillar of cardsphere these many years. 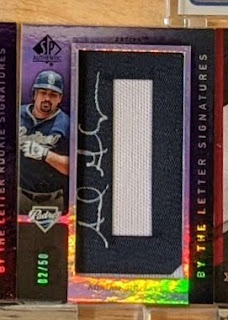 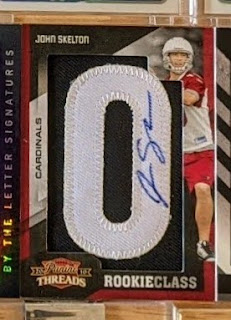 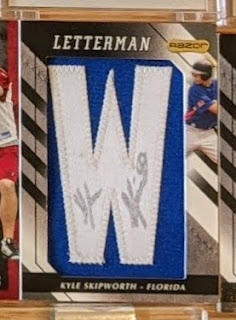 W - Kyle Skipworth
Waiting 'til Next Year like to fly the W. 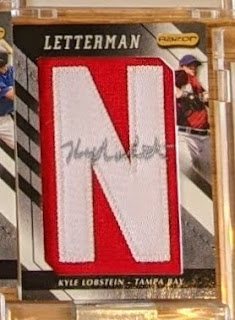 Not another guy named Kyle? Too many Kyles! Lobstein lobbed the majority of his MLB pitches for Detroit, so that links him up well to my buddy Dennis at Too Many Verlanders.

And that'll wrap it up! Man, that was hard and I had to cop-out with a ton of great blogs under the "E" catch-all, but hopefully nobody feels slighted. Only so many letters, ya know? Sorry if I left anyone out. You all are awesome. Hurray for blogging about sportscards! It's been a fun 8 years being a part of it; Here's to many more!