A few months ago, I debuted this new sub-binder project of mine called The Vagabond Binder. One player per page, ideally pictured with a different team for all 9 slots. The honor of representing Page 1 went to Rickey Henderson, and now my second completed page goes to fan favorite Benito Santiago. 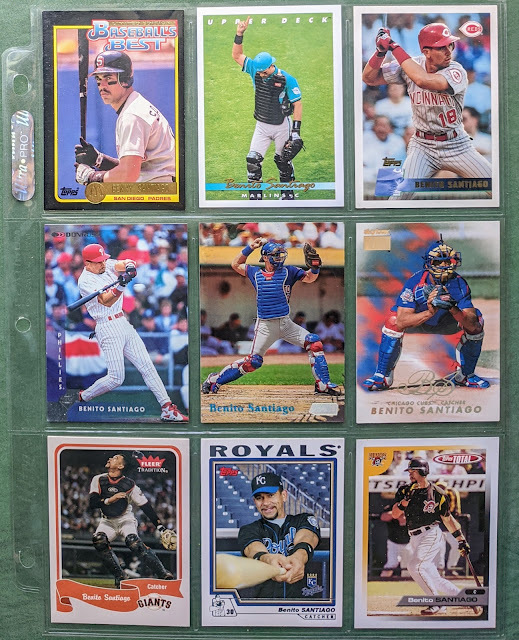 While I'm setting the minimum number of different teams to be considered for this project to be 7, it's best when I can hit a full 9, as we've done again here. 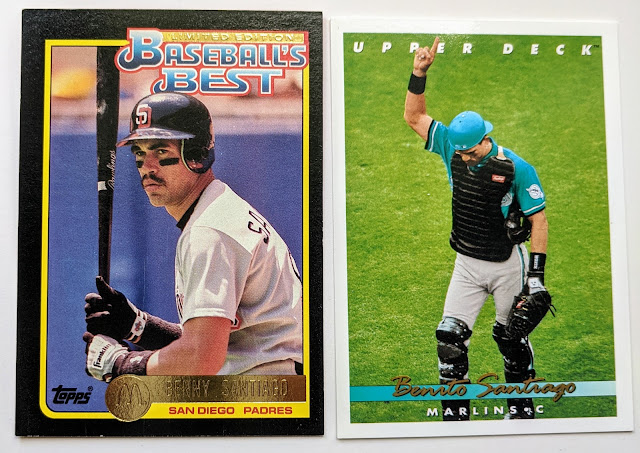 Might have been nice for this Padres fan had San Diego held onto him and made him a Padre for life.. but with one very notable exception, they've historically not been good about committing to their homegrown stars. Benny's run in brown lasted from his 1986 call-up until walking after the '92 season. He won the NL Rookie of the Year unanimously in 1987-- with a 34-game hit streak among the highlights of his campaign.

After leaving the west coast, Santiago signed a 2-year deal with the Marlins and hit the first home run in franchise history. He would constantly remind fans and teammates of that fact, as pictured on his '93 Upper Deck card here. (I'm joking; he's probably just indicating there's one out in the inning.) 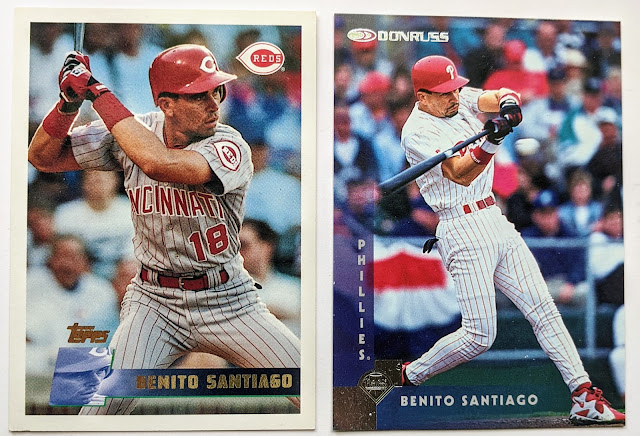 Apparently he then decided he wanted to play for teams that wore red pinstripe uniforms. He spent 1995 in Cincinnati on a one-year deal, and then followed that up with 1996 on the Phillies.

His .286 average with the Reds was his best since his ROY year. Then he set a career high in Philadelphia with 30 home runs, including the first grand slam ever given up by Greg Maddux. 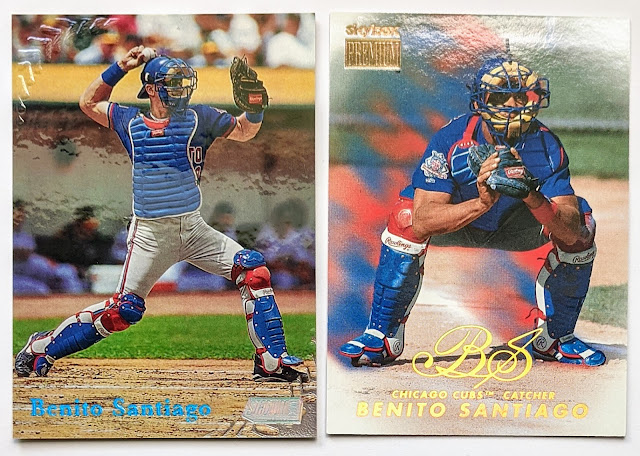 Needing a break from red, Benito was curious to experience playing for blue teams. He was with Toronto for 1997 and 1998, though injuries limited him to 112 games combined over those 2 years.

Then he played for the Cubs in 1999 before returning to the Reds for the 2000 season.

These two are the only cards I've got of him with these teams, but I kinda want to "upgrade" to different cards featuring prominent logos someday. I worry the catching gear obscures which team is being represented. You need to really look to closely to figure it out. 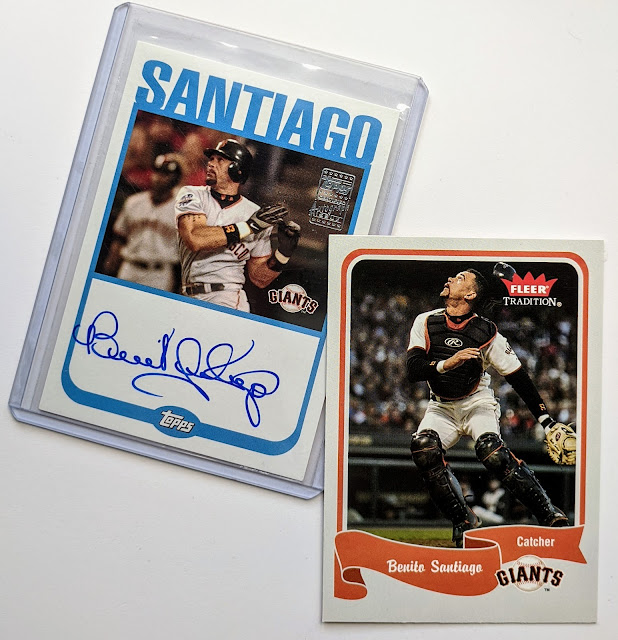 I was tempted to use a certified auto I've got as representation for his Giants spot, but ultimately I decided that the spirit of The Binder of Enchantment and Wonder and the sub-binders contained therein such as the Vagabond Binder are to celebrate the game/hobby without concern to "hits" and value. Nice auto, though! But yeah, for the page, I went with the Fleer Tradition base card.

Santiago was in SF from 2001 through 2003. That middle year was the best of his stay, as he got an All-Star nod (his first since leaving San Diego [and turns out only]), plus he was the NLCS MVP, leading the '02 Giants over the Cardinals to the World Series where the Angels somehow managed to escape Barry Bonds for 7 games and bring a championship to Anaheim. 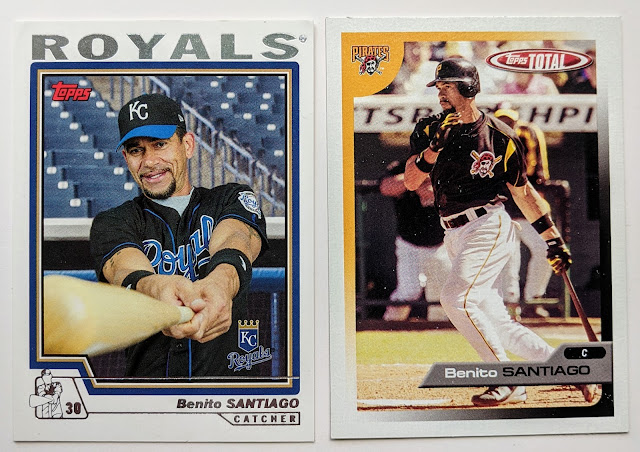 Now we're running out the clock on the veteran backstop's solid career. He signed with Kansas City for 2004, but a broken hand caused by a HBP in June cut his season short.

Then he was traded for the only time in his life-- Yes, all the other team-hopping was via free-agency!-- when the Royals sent him to Pittsburgh for reliever Juan Carlos Oviedo. It'd prove to be Benito's shortest MLB stint, only appearing in 6 games for the Buccos before being released a month into the 2005 season at age 40. He played a handful of games in the Mets minor league system later that year, but was done for good after that.

I'd like to upgrade these 2 cards someday but they are the only examples I have of him with these teams. The Royals card has dinged top corners and the Pirates card has some surface issues. But then again, these sub-binders are all about enjoying cards "for the fun of it" and so I don't stress stuff like condition much here. 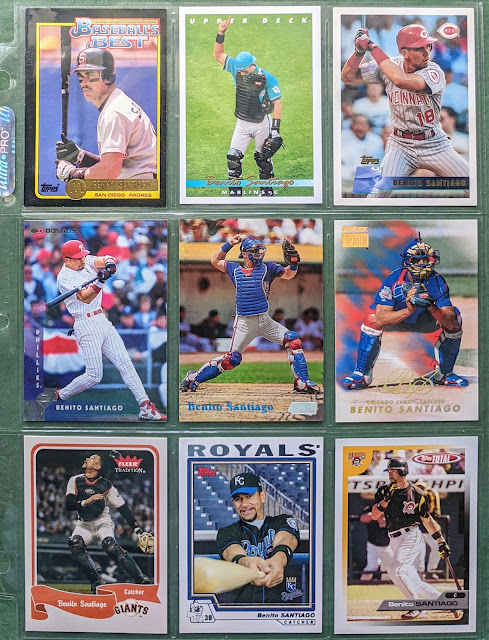 And so that wraps up this page of the Vagabond Binder. Nice, varied selection of cards.

Next up on-deck in this series.. Canseco maybe? Does anyone have any available cards of Jose on the Yankees or Expos (2002 Topps #435)? Those are the missing two I need to complete another page. And I've got a list of other candidates I need to take a look for in my collection and see if I can keep adding more guys to the binder.
Posted by defgav at 3:31 PM