How Yellow was my LaValley PC? The Yellowest possible!

It's Gavin LaValley's birthday today. He was the first "Gavin" to hit the scene after I returned to the hobby, and inspired me to give a shot at the "advanced collector moves" of rainbowing and supercollecting. (Gavin Floyd was on the downslope of his career at the time, and there was also Gavin Cecchini who popped up in 2011, but as a Mets #1 draft pick, his card prices weren't conducive to going after too hard, and he already had cards when I came around, whereas I was there with LaValley from the beginning.)

With LaValley currently out of affiliated ball, topping out at AA so far, chances are he won't be getting more cards, at least not in a major release like Bowman. (I'm still hoping he ends up becoming the next Mike Trout, don't get me wrong!, but that'd be unexpected.)

So unlike supercollectors of the likes of Griffey or Garvey with endless cards and more coming out every year, since I'm dealing with a significantly less renowned player, I've essentially got a finite checklist to work with here (just keep an eye out for future Bowman buybacks, maybe). There have been a couple 1/1s that "got away" over the years but for the most part I've been successful in my supercollection targets.

Yep, a total of 6 sets of printing plates have been packed out featuring Gavin LaValley. With a recent pickup, I've now secured every Gavin LaValley yellow plate ever released. 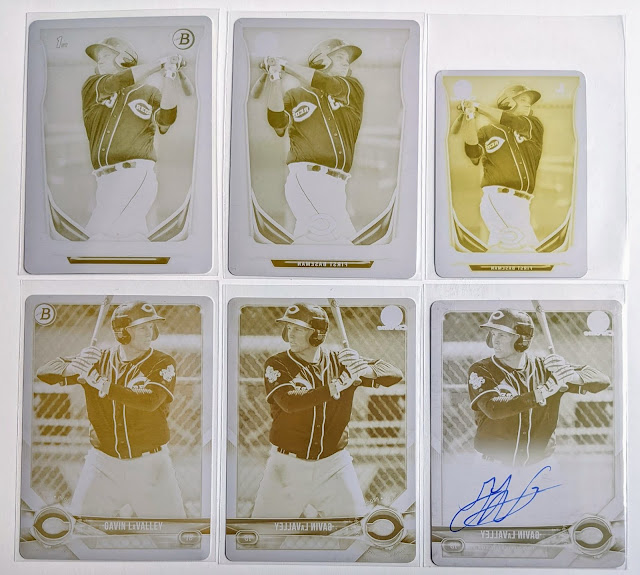 LaValley was included in Bowman products in 2014 and 2018-- I'm just calling them all "Bowman" for simplicity, but there's 2014 Bowman Draft Picks and Prospects (paper plus Chrome), 2014 Bowman Chrome Mini, 2018 Bowman (paper plus Chrome), and an auto in 2018 Bowman Chrome. He also got cards in 2014 Panini Prizm Perennial Draft Picks and various minor league issues, but only the Bowmans (Bowmen?) had plates packed out. 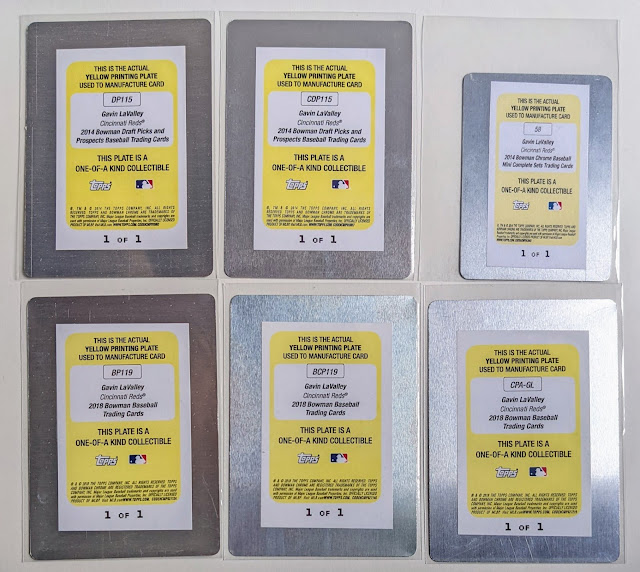 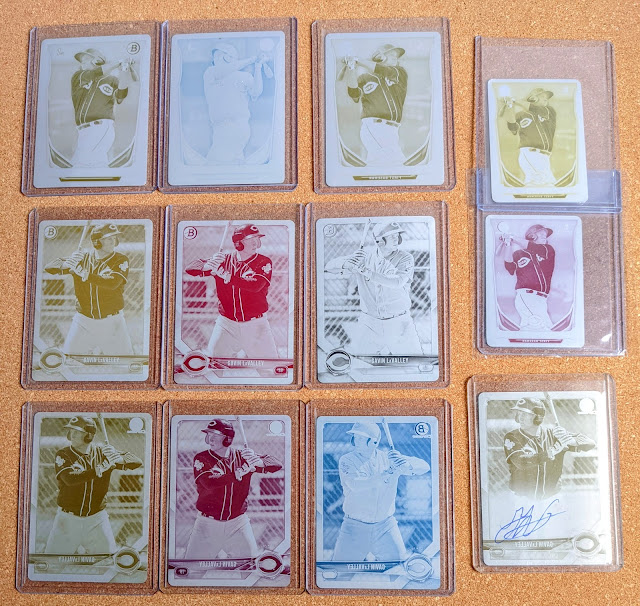 For fun, here are all of my LaValley printing plates together in one photo. I haven't yet achieved the 4-plate rainbow that comes with the old collector joke of "Now I can print up as many copies of the card as I want! LOL",  but I'm just one color away on a couple of them. Black is the toughest plate type for me to find, apparently, with only one. Since he's pictured with Cincinnati, it's no surprise the magenta plates seem to pop the most. I suppose I'm partial to the cyans, considering blue as my favorite color.

Anywho, Happy Birthday, Gavin! I hope your age-27 season is a bright and sunny one on and off the field.