It's that time of year again that I try to do these annual posts checking in with the lesser-known active players I collect. I did the 2021 season recap for guys who went to my high school back in October, now I'm getting around to the guys who share my name. 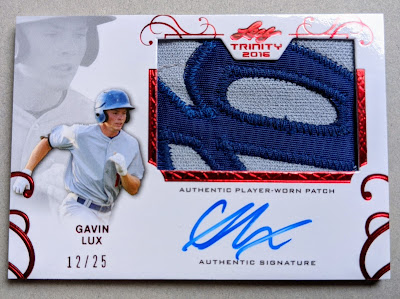 Gavin Lux is still looking for his breakout year, but he's an important part of the current Dodgers team. His season was up and down (all the way down to the minors for a while), but he bounced back from a forgettable 2020 to hold his own. Defensively versatile, he played everywhere but 1st base and catcher in 2021. With Corey Seager leaving via free agency, he might be given more opportunities for steady playing time in 2022 as he looks to establish himself in his age 24 season. [This post is written under the assumption baseball will be back with a full season next year, though I personally wouldn't put too much faith in that.]

(I haven't gotten any new Lux cards this year, so figured I'd revisit this auto/patch/Christmas Card I've had for years. Unlicensed Leaf stuff like this doesn't really go up in value much, but still kinda cool when you can pick up a card like this for a good price. The rest of the cards in this post are recent pickups.) 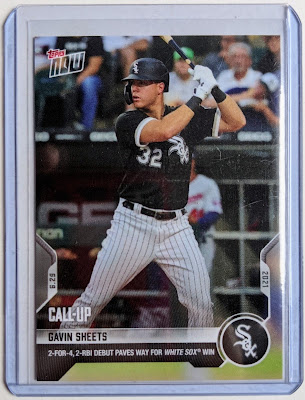 Meanwhile in the AL, Gavin Sheets became just the 4th player named "Gavin" to play Major League Baseball when he debuted June 29, 2021. All told, he got into 54 games and impressed with a 123 OPS+. Topps gave him 4 or 5 cards as a "call-up" in Topps Now, but withheld his "RC" designation until next year, so expect to see his rookie cards flood Topps products in 2022 (though technically he exceeded rookie status already). He turns 26 in April, so there probably won't be a ton of investor hype with his cards. But yeah, hopefully he keeps performing well. 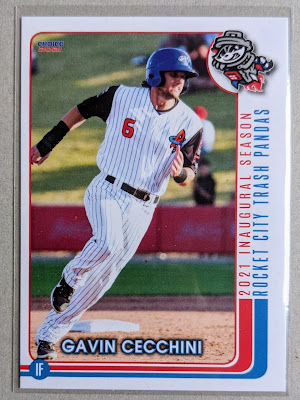 Gavin Cecchini followed Gavin Floyd as the 2nd "MLB Gavin" years back, and while it looked like the former first-rounder's injury-plagued career had come to a close last year after struggling in Indy ball, 2021 saw him resurface in the Angels organization. He ended up batting .288 in triple-A, so who knows, there might be some life in his career yet. I'd love to see him get another gasp at the top level.

Before we take a trip down to the farm, one more mention is due. With the Negro Leagues now considered Major Leagues for most intents and purposes, there's technically a new Major League Gavin. 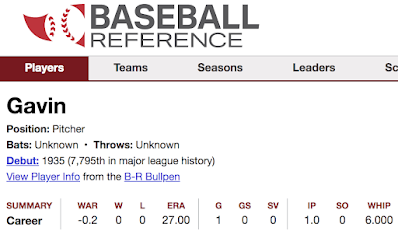 Just one career appearance for this player known only as Gavin: an inning pitched for the Brooklyn Eagles in 1935 where he gave up 4 runs (3 earned) on 5 hits and a walk. He may possibly have played in other games that've had their stats lost to the winds of time (along with the rest of his name), but at least he got his foot in the door for a baseball-reference page. Can't really add him to my card collection-- a very simple custom with no picture would be the best I could do; hardly seems worth it-- but figured I should at least give the man a head-nod here on the blog. Even assuming it's just his last name, still a true pioneer for Gavins everywhere!

The 2021 Columbus Clippers (AAA, CLE) included not only a guy named Gavin, but also a guy who went to my high school (Trenton Brooks)-- a team tailor-made for my fandom! Collins struggled to hit but was solid behind the dish, focusing only on catching after splitting time at the hot corner in years past. 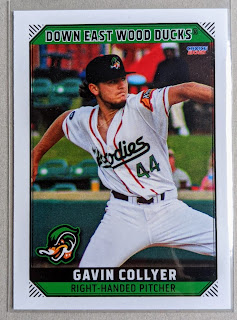 20-year old Collyer pitched well for the Wood Ducks. (I'm going to keep most of these short.)

Conticello, a 3rd baseman, is was a 2021 8th round pick by the Diamondbacks out of high school.

Hollowell pitched well in the depths of the Rockies system.

Jones is an infielder in the A's org.

Ah, a guy I've got a lot of cards of! LaValley was released by the Reds after the 2020 minor league season was cancelled. He found himself with the independent Kane County Cougars in 2021 and had a solid season, batting .270 with 12 home runs in 79 games. I'm rooting for ya, Gavin!

Baseball-reference is counting college stats in their active years here, which is kind of confusing. Anyways, Sonnier is an undrafted player who pitched for an indy team after college.

Stone is a starter in the Dodgers chain who pitched well in 2021.

Oh wow! After not being in affiliated ball since 2017, Stupienski resurfaced in the Royals organization in 2021. Good for him! Got a nice TTM return from him with an assist from his cousin, former cardblogger "Bubba" (Matt) years back. After looking good in high-A ball, Gavin made it up to AA for a game.

The Phillies' 9th round pick of the 2021 draft, Tonkel is an outfielder out of high school.

An undrafted pitcher who has played for Indy teams in recent years. 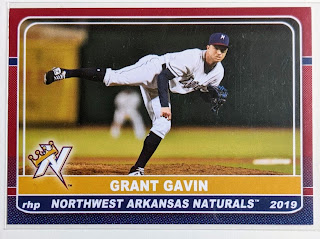 Honestly I was thinking about not doing this post this year, as I've got plenty of other stuff in my mental "to blog about" list and with so many active Gavins out there now compared to only a few years ago, this annual exercise might have run its course. But then I saw the recent news that Grant Gavin had been selected by the Padres in the minor league Rule 5 draft and I got pretty excited that San Diego has their first Gavin (even if a last-name Gavin isn't quite the same, but hey, close enough). Grant pitched well this past season, with his K/9 rate of 11.1 ranking fifth-best in the Triple-A East league (minimum 70 innings). Hope to see him take the mound at Petco Park before long.

So there you go. Best wishes to all Gavins everywhere!