Here's a post with some cards I've received from fellow collectors recently.

Bru from Remember the Astrodome remembered his ol' pal Gav, and sent me over some cards for the first time in a couple years. The holiday PWE was chockful of Padre cards from the last couple years, and I haven't been buying new product or trading much during that time, so they were all extra fresh feeling. 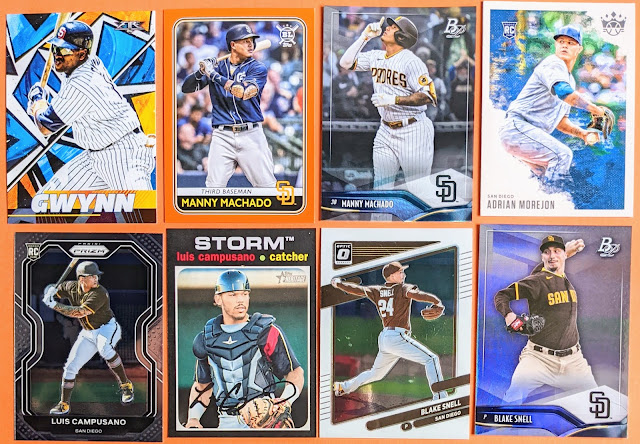 Thank you, Bru! Working on some Astros return-fire for you.
-o-
Next up is a TCDB trade with Art (username "AAARRT"). I think this was the first trade ever done on the site that I initiated. The scattered trades I've done there prior were all proposed by the other guy, as far as I can remember. I was looking for someone to help me with the cards Topps gave Dick Allen this year, and Art had most of them available. I looked at his wants and was able to come up with a brick of 2017 Heritage needs for him. He could not have been more pleasant to deal with. 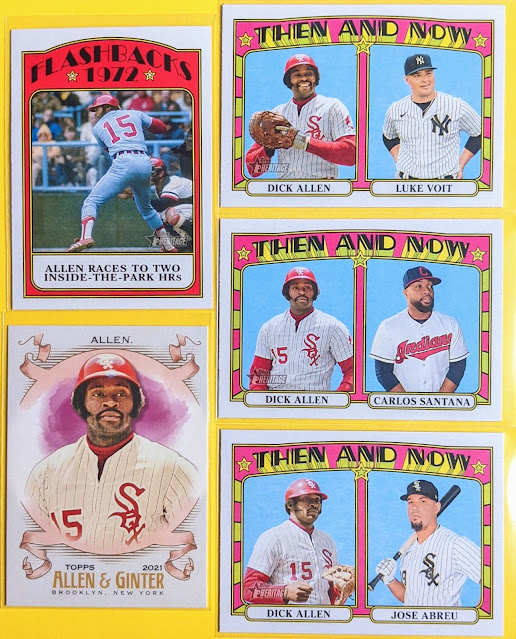 The Flashback insert is cool. There are no parallels or anything, though if there were I'd likely chase them. The "Then & Now" Heritage cards don't do a ton for me, nor does the Ginter, but glad to see Topps including him after basically no new Dick Allen cards from them since the days of All-Time Fan Favorites. You can see the same photo for Ginter was used with the Carlos Santana card. I wish they would have used the shot from the Luke Voit-shared card featuring a big smile whilst having a catch. (They did also use that photo in this year's A&G, but for a rip card [#/99], which I'm keeping an eye out for.) I will probably eventually go after the various Ginter parallels/minis, but between the design and the photo, I'm not inspired to hit the rainbowing very hard on this one. But cool that Dick ALLEN finally has his first Allen & Ginter card. (Matt Ginter, another PC guy of mine [who I happen to know turns the big 44 tomorrow] never got an A&G card, sadly.) Still also need Dick's Ginter X card for this year, but as a 301+ high number "SP", he's not included in the Chrome version of Ginter (that only covers 1-300 of the this year's standard A&G checklist). Oh, he also supposedly has coin "relics" in Heritage, though I don't think any have surfaced yet. My rainbow of his '21 Archives card has been coming along, but I'll wait for a future post for an update there. 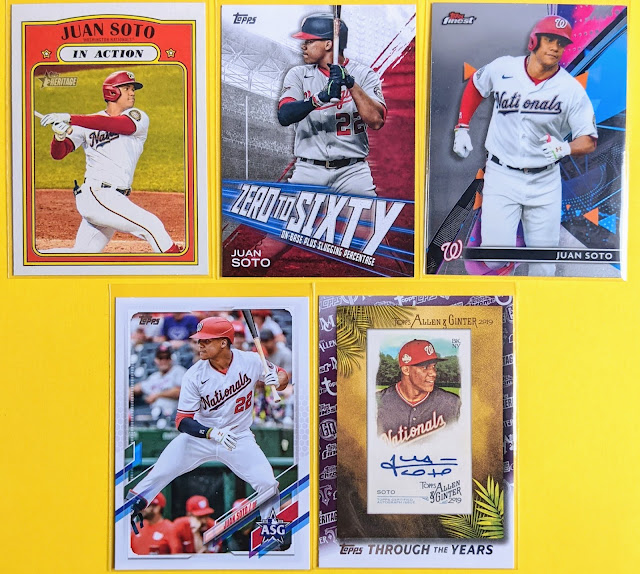 I also got a few recent Juan Soto cards for the PC, including an example of Topps' foolish choice of reprinting their autograph cards, causing a lot of confusion for uninformed collectors. 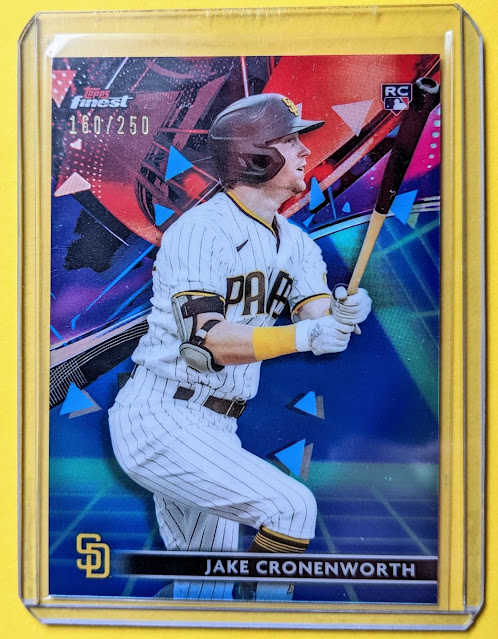 The top card of the trade with Art was this numbered Jake Cronenworth RC. I don't have much of him in my collection yet. 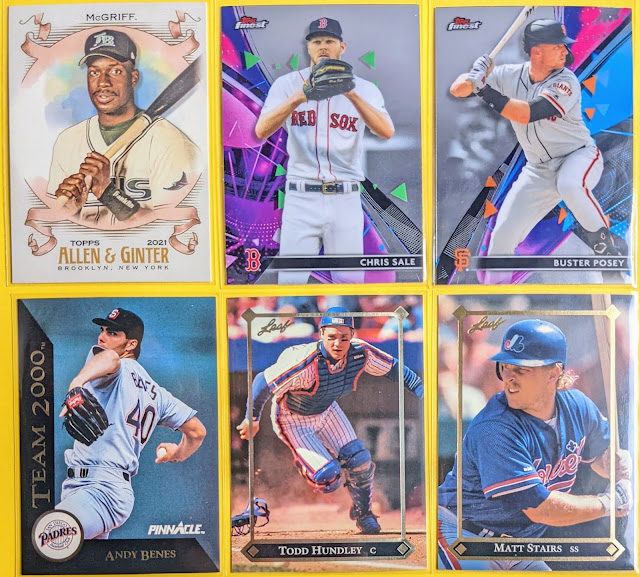 And a few more cards included in the deal or thrown in as a surprise bonus. Thanks for the trade, Art, if you're reading.
-o-
And here's another TCDB trade I initiated. 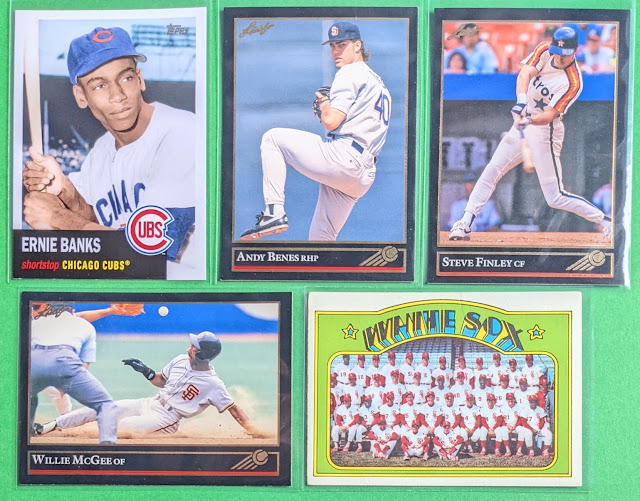 I'm working on those Cards That Never Were from 2021 Topps Update. I was looking who had my needs available, which led me to another friendly guy (username "Johnsogr") whom I was able to dig up some vintage needs for. I asked for the Leaf Black Gold to round out the PWE (He had some other good ones I needed for my parallel setbuild, like Bagwell and Nolan Ryan, but I didn't want to over-ask, so stuck with "commons" I like/collect.) The guy kindly threw in the '72 Topps card that was on my limited TCDB wantlist as a surprise bonus.

I really should do more trading on TCDB now that it's slowed down so much on the blogs. A lot of my old trade partners just aren't trading much anymore, and those that are still going strong with trading have already traded with me so often in recent years that I don't have much left they want since I haven't been ripping packs or going to the monthly card show since the Beforetimes.

Finally for today is a package from Dennis from Too Many Verlanders that just showed up (like literally hasn't been delivered yet as I draft this paragraph, but Informed Delivery has informed me a tracking number from Ann Arbor to me is Out For Delivery and so I want to get it into this post as a last-minute edition before publishing). He's good about sending out a holiday blast of card mailings most years, a great tradition to be a part of. I had thoughts of doing similar this year, clearing out some of my cards "set aside for trader buddies" (some of which have been set aside for several years at this point), but the time and energy wasn't there for me this year. I'm hopeful of some January activity on that front, though. 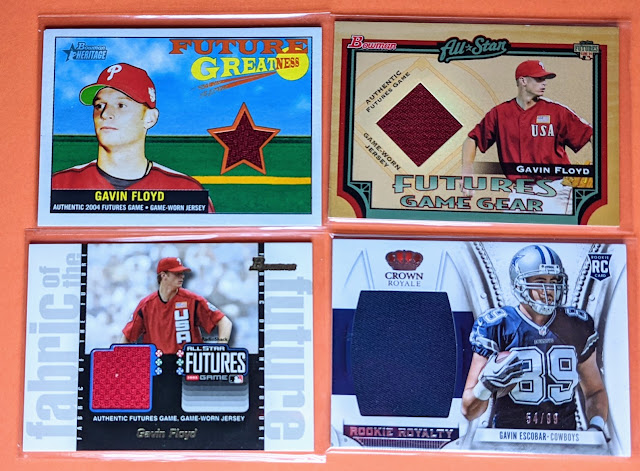 Feast your eyes on all that Gavin-used cloth! 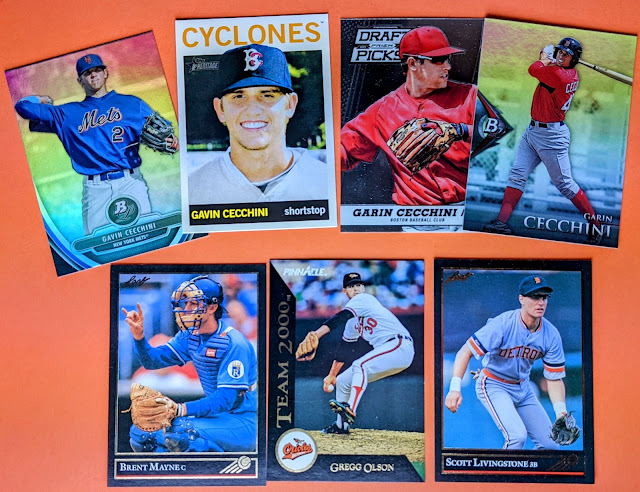 Plus some Cecchini Brothers and black gold. Thank you, Dennis! I've got something set aside for you I'll get headed your way soon.

Thanks for reading and Happy Holidays, everybody! 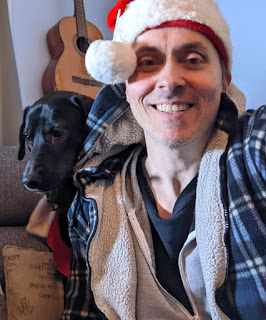