I stumbled upon a neat looking Kirby Puckett card that I pulled the trigger on way back on September 21, 2017. 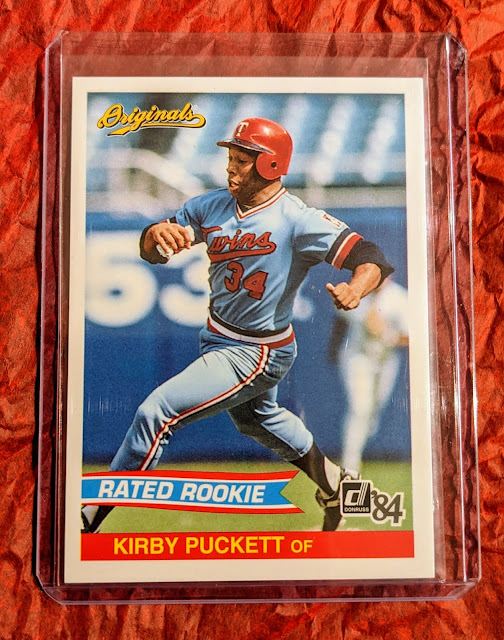 I generally love "official customs"-- you know, when a card company puts out cards-that-never-were-but-belatedly-now-are.

When you consider Donruss was ahead of the curve by releasing a Fred McGriff Rated Rookie in 1986-- with Topps and Fleer not giving a card to him till their '87 update sets-- it's not that far fetched that they'd scoop the competition on Kirby Puckett a couple years earlier.

I've been stuck on 2 remaining "Rookie" cards for several months until finally scoring the companion Kirby that just arrived today... 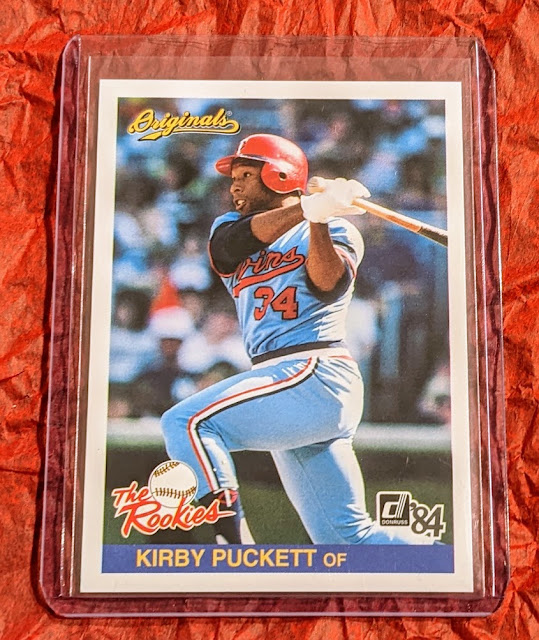 It's the first time I'd seen it for sale in the 5+ years I've been keeping an eye out. Man, I smashed that buy-it-now button super fast!

I'm now down to just the Don Mattingly retrofitted Rated Rookie to close the books on this collecting pursuit. I've seen the Mattingly for sale 2 or 3 times, but it's always been slabbed and that's helped push it out of my price range.. dang crazy Mattingly collectors! lol. But hopefully a reasonably-priced raw copy pops up one of these days that I'm able to score. For now, it's bumped up my mental list of whales I'm scouring the cardboard oceans for.

While I've got an okay Mattingly PC and like him fine, Kirby is one of my favorite guys to collect-- such a fun player to watch and root for, even if he turned out to have a dark side off the field-- so even if I die before tracking down the Don, it's still very satisfying to finally secure that Kirby I've been after for quite a while. There's another Kirby I've spent a lot of time searching for, one of my top whales, though I've accepted in this past year or two that the card was never actually released and no one has even ever seen a picture of the card much less own one.

But hey, Kirby's "1984 The Rookies" card from 2002 exists and I've finally got it! Feels great to complete the pairing of '84 Donruss Kirbies that never were. I'm fortunate enough to own his real 1984 Fleer Update card, as well as a Topps "1984" card that never was from last year's Update (oh yeah, I also completed that insert set recently but haven't gotten around to blogging about it). He had no minor league cards released in '84 (just one in 1983, which I don't own) nor any other oddballs I'm aware of, so that completes a run of Kirby Puckett "1984" cards for me. Nice!