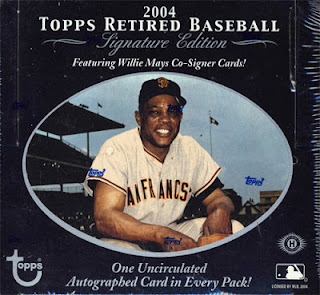 OK, I'll admit I've had a breakdown over a particular super high-end set. 2004 Topps Retired Signature Edition. Goddamn, I'm putty in its hands! I was never really into autographed cards, but a few months ago I won a Bill Madlock from this set on Listia and just loved it. I've been stricken with the crazy idea of collecting ALL the certified autos from this set (or at least attempting this feat). The press from Topps says there are 74 different autos (not counting 4 Willie Mays co-signers), but I think there are actually 76 by my count (though I could be off).
Why do I love it so very much? Let's break it down: 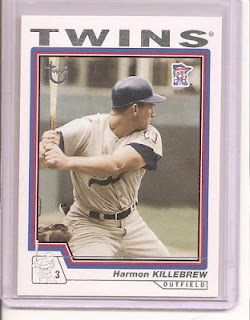 So yeah, I'm bent on collecting this set. Packs had a list price of $29.99 when they came out. A pack contained 4 base cards plus 1 uncirculated auto. The current going rate for a pack here in 2013 is about $50-75 a pop. Some of the "common" autos sell for around $5-10. These cheaper guys include the likes of Bobby Grich, Ron Swoboda, and Ron Kittle. I don't know exactly what the top-tier guys go for, honestly, since I've only been after this set for a few months now. A Duke Snider is (as of now) on eBay for around $150. And, oh, looks like a Hank Aaron just went up on eBay for $350. I've seen faded black sharpie versions of Yaz and Yogi asking for around $100. Refractor versions seem to be going for 2 or 3 times as much.

Maybe someday I'll do a "set blog" with a post for each card. But for now, I'll keep this to an occasional post. I very recently shelled out $251.95 for a hobby box (5 packs). Dumb, I know, but I'm counting it as a gift from some birthday money I received months ago. What are the chances I'll pull cards valuing even half that much, total? Probably not very good. But who knows; fingers crossed for Hank Aaron or Nolan Ryan or somebody cool as that. It's some excitement for me, if nothing else. I'll probably check in with updates on what I pull (at $50+ a pop, I'll try to spread them out a bit, perhaps use them as life rewards.. for example, after I finally go in for my dental exam, I get to rip a pack).

Anyways, enough talk. Let's check out some more pics! Most of these I don't own, just found pix online, FYI. 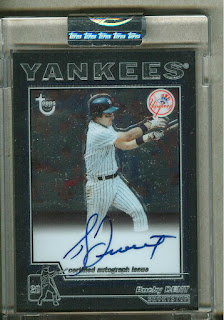 Here's the Bucky-- the oddity that apparently only exists as an auto, not in the base set. 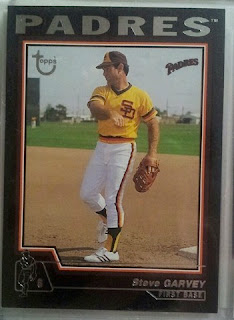 Here's a black parallel. Similar to the auto versions, but without the white, signed part near the bottom. Again, these are numbered to 99. 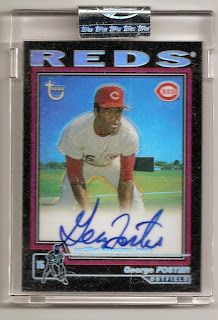 Example of a refractor version. Doesn't look much different, but is a tiny bit more shiny/colorful/refractory and numbered to 25 on the back. 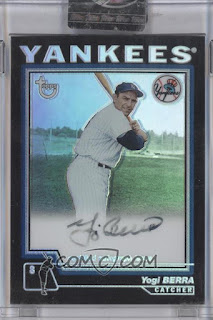 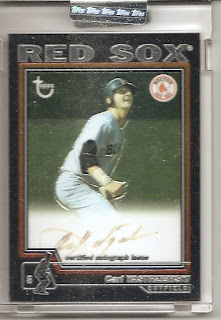 Here's a Yogi Berra refractor and a Carl Yastremski, both sadly in faded black sharpie. 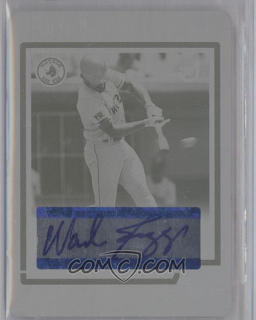 Each guy with a signed variation in the set also has 4 different printing plates (one for each prime color, I guess?), each numbered 1/1 with an autographed sticker put on it by Topps. Pictured is Wade Boggs, specifically the yellow printing plate for his card. Kinda neat, but at ~$200+ a pop, I don't need to own any of them. (Though I would be happy if any fell into my lap.) 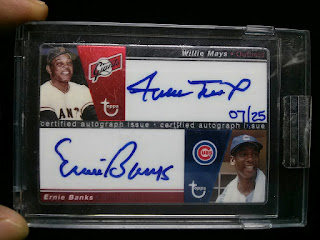 Here's an example of a dual signed Willie Mays card. There are cards with Willie signing with 4 different classic HOF guys, each numbered to 25. --But hey, what's with his signature? That doesn't look like it says "Willie Mays" at all! More like "Fame Tui (and a doodle of a ribbon or a fish)". Honestly, no way I'm ponying up upwards of a grand for one of these cards, which seem to be the going price (Though, again, I'd be stoked to pull one from a pack, or randomly find one in a stinky cardboard box on the side of the road or something).

Let's wrap this post up with the checklist for the set, including the base set and also noting which guys have certified autographed cards in the set, too.

Oh, Topps 2004 Retired Signature Edition, you got me! Nice work.

I guess I should mention that Topps returned to do another Retired set in 2005. But honestly, those don't grab me nearly as much. It's got an interesting player selection of fan favorites (and "this guy? really?!" lesser favorites), but the auto cards are white (not black? boring). And I've never been a fan of the the last name in big letters on the top. So, never-say-never, but I don't plan on collecting that one. But who are we kidding, if the day comes that I complete the 2004 Retired autos and have few bucks laying around, it'll be tempting to give it a shot. Sigh. But yeah, that's a couple decades down the road.


Similarly, the first Retired Signature Edition was in 2003. While I like that design ok, still doesn't grab me as much as the 2004 set. Again, maybe I'll break down and go after that someday in the future, but let's hope not. 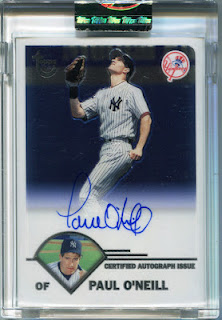 Well, that's it for this blog's initial baseball card post. It'll probably be the longest I ever write, coincidentally. --rambled a bit there-- But yeah, thanks for reading. Stay tuned for more on my quest of collecting this set.
Posted by defgav at 9:58 PM