Bo Jackson shirt from the 90s (that I still wear!)

While my new blog here is called Baseball Card Breakdown, I plan to occasionally drift a bit from the topic of baseball cards and ramble about other stuff.. if that's cool with you all. Yeah? Great!

This divergence is at least baseball related. One of the oldest pieces of clothing I own (and still wear) is a Bo Jackson "Hit & Run" shirt that I got way back in middle school.. so we're talking dawn of the 90s. Probably 1991. Back when Bo was on the Royals and Raiders, respectively, and plays up the 2-sport deal. It's got a Nike logo on it, but no team identification other than uniform colors. Amazingly, I still wear it, and have been for over 20 years.

It's now very ripped up, so it's mostly a night shirt/pajama top. But living in a "hip" (weird) part of Portland, OR, I can occasionally wear it out while walking the dog or whatever and not get a second look. (You've seen that Portlandia show, right? It really is pretty much like that.)

It was originally a long-sleeve shirt, but somewhere over the past couple decades, I cut the sleeves off at the elbows. And it's this alteration that really made the shirt such a invaluable item in my wardrobe. You see, I'm a guy who often gets cold arms at night.. specifically the area on the back of my arms between the shoulders and elbow. And when the temperature starts slipping down, a regular t-shirt just doesn't do the trick. It can be really annoying. So this shirt is great for the Fall or Spring when it's too warm for long-sleeves, but not hot enough for a regular t-shirt. Great middle-ground option. You'd think I could just buy a similar shirt (or cut-off another long-sleeve shirt), but nothing else seems to get it just right. Either the sleeves are too loose or not the exact correct length or something.

I also feel good that I can still fit into my clothes from middle school. While a lot of my old friends from back in the day have packed on a few extra pounds-- as humans often do as they age-- I have remained bizarrely consistent in my size regardless of my fluctuating eating/exercising habits at any given period over the past 25 years or so. Here's hoping I don't hit that point where my metabolism changes anytime soon and I have to deal with strict diets and exercising. Yesterday at work I ate three Krispy Kreme donuts. Three!! Yeah, I don't know what I was thinking, either. They were tasty at the time, though (and free, too-- thanks, Debi, for bringing those in!) But yeah, today I went on a nice hike, so hopefully that was able to combat yesterday's gluttony a bit. The trail was to a place called Punchbowl Falls. Gorgeous views and a lovely waterfall at the end. I love hikes where there's a goal/end. Just looping around is kinda boring to me. But give me a destination to make it to, and you've got my interest, whether it be a waterfall, stream, peak, dead body, or whatever.
Very tired now. Just want to post this blog then head to bed. Here's a couple pics and a video from the hike. 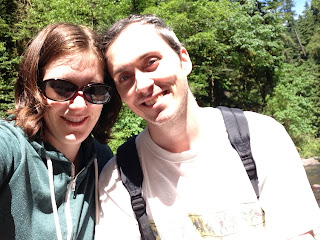 With a little luck, I'll remain in decent shape, as will my old Bo Jackson shirt, for a few more good years.
Posted by defgav at 10:39 PM