Before I started reading baseball card blogs, I had no idea what a "blaster" was. Hell, I'm still not exactly sure. But I think I recently bought one on eBay for $20. I don't really mess with new cards much at all. I haven't bought a pack of any current Topps flagship set since 1993 (not counting a single 2008 pack I bought at the dollar store).

But I'm drawn to Topps Archives, what with the classic designs from yesteryear and the old school retired players mixed in with guys from today. I've never heard of half of the current guys (I don't really follow baseball much these days), but the old guys are cool. Man, I flushed damn near $100 last year on 2012 Topps Archives packs. I was really hoping to pull a certified autograph. Even a "common" auto like Wally Backman would have been ok, but preferably a badass like Bob Gibson. But I got shut out. The best I got out of, what, 20-something packs was a jersey Andy Peditte. Also a jersey of some Braves dude (Jason Heyward, I think? Oh, and I should mention I don't really care about jersey cards and fully expect them to be "fake" but whatever, still cool to pull) and a gold parallel of Josh Hamilton. ("Parallel", there's another baseball card term I wasn't familiar with until I recently got back into the hobby a few years ago.) So, yeah, my 2012 Archives "chase" was not, in fact, caught. It's ok, though. I like the cards, especially the old guys, like I said. And I was going through some tough times around the time I was ripping packs (somewhat of a "breakdown", if you will-- See tying in the blog name! lol), so they were a nice little distraction. I remember the day my super amazing dog Lucy died (no fooling, she was such a great dog-- I know everybody loves their own dog n' all, but damn, I can't overstate how much she enriched our lives, and everyone she met, really; imagine Winnie The Pooh as a dog; like a sweet, cuddly living teddy bear; so sad to lose her so soon), but anyways, that night, in the lowest depths of my sadness, I pulled a Roberto Clemente rookie reprint from an Archives pack. Of course I couldn't help but see a parallel (I need to learn how to spell that word without spellcheck's help) but yeah, the parallel between one of the greatest humans of all time and one of the greatest pooches of all time, both taken from us too soon. Now I always think of Lucy and smile when I see that card. I think it's currently visible on display in the header pic of this blog.


So anyways, I think Topps Archives is kinda cool. The 2 or 3 reviews by other bloggers I've seen are not crazy about the 2013 set. I'm definitely not planning on buying a bunch this year like I did last year, though; just this one blaster will likely do me fine.

So what did I get brag-worthy this year? Not much. A jersey card of Hanley Ramirez is my only real "hit" so far (I've currently got 1 more pack to rip). Also got a couple mini tall boys which don't do much for me to begin with, but especially not Braun and Strasburg. Other short prints include All-Star cards of Fisk and Schmidt (I like those guys, but not these cards-- blah) and a '68-style Denny McLain. So yeah, nothing to really get excited over. As far as base cards I'm happy to have pulled: non-actives Griffey Jr, Eddie Mathews, Yogi, Jackie, Ryne, and Stargell. For current guys, there's Adrian Gonzales (my Padres allegiances cause me to still like the guy, even in a Dodger uni) and Dylan Bundy, who I must admit I'm not really familiar with, but is supposed to be a semi-hot prospect.. maybe? 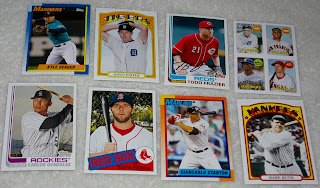 and finally, here's the front of the Babe card whose back greeted me when I opened the pack. Love the tiny full stats on the back, even the crappy last year with the Boston Braves! 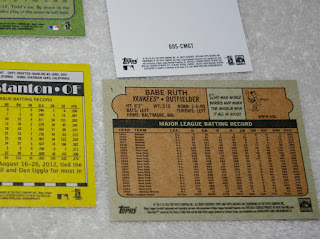 So anyways, looks like I'm shut out once again for any Archives fan favorite autos. Bummer. Maybe next year.
I'll pick out some of these cards to add to my collection and the rest will go into the "for Listia" stack. Maybe if this here blog ever gains traction, someday I'll start trading with other guys from the blog community. I don't think I've ever traded cards over the internet with anyone. I've gotten some card in exchange for music bootlegs (I've got a pretty big selection of live/rare music from a select few bands I like, and make it known that I'll trade copies for cards). But yeah, I haven't done much trading. I guess Listia is basically trading, since I auction off cards for credits, then use those credits to bid on other cards, but that's not quite the same. Oh man, this would be the perfect time to post my referral link in case anyone reading this hasn't signed up for Listia yet! If you're not familiar, it's like a "free eBay" marketplace where you buy and sell stuff for credits (instead of money). Sorry for the spam-ish end to this long, rambling post, but yeah, if you want to sign up for Listia, pretty please use this link because that'll get me some bonus credits and potentially pull me back from the brink of another breakdown (see, tied it all back into the blog title! score!)
Posted by defgav at 8:40 PM