Last time I talked about 2004 Topps Retired Signature Edition, I mentioned I dropped a chunk of change on a hobby box (5 packs) of this ultra-super-deluxe set. Well, it arrived the other day and I opened a couple packs.

Pack 1.. drum roll..
..And the uncirculated autograph is...
[swing and a miss]
Bobby Grich
Dang, already have this one. And it's probably the easiest/cheapest one to find (about $5-10). Oh well, trading fodder, I guess. I gotta admit I wasn't familiar with Mr. Grich before getting into this set. He just somehow eluded my awareness. But learning about him, he was a damn fine ballplayer. Four-time Gold Glove winner, and home run champ in 1981. Guy's got my respect. That said, still a disappointment to pull this double.
I couldn't resist opening another pack to ease the pain...

Pack 2...
Dale Murphy
Ok, here's a good (not great) card to pull. I didn't have this one yet. It's somewhat common to find on eBay, but usually with a higher asking price than you'd expect (You'd expect it around $10-20. For over $20, the player should be in the Hall of Fame or deceased; Dale is neither of these things.)
Mr. Murphy was one of the best hitters of the '80s, winning back-to-back MVP awards (1982 & 1983). Unfortunately for him, he was stuck on the Braves, who sucked back then. He was traded to the Phillies in the early 90s, and his numbers went south, leaving him on the cusp of HOF-caliber numbers, but ultimately falling short.
Since I needed this card, I'm happy to get it, though it's not much of a "hit". 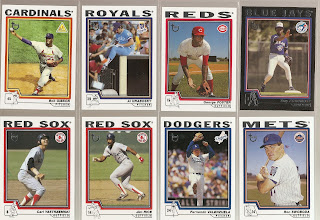 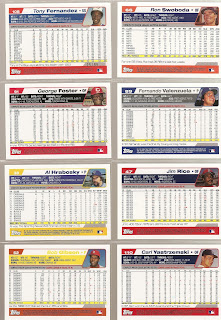 So yep, 2 packs down, 3 left to go. Hopefully there's somebody in the remaining 3 packs who'll justify what I spent on that box. But even if not, oh well, it's fun and exciting to open an expensive pack of baseball cards. Like a smaller scale version of blowing money in Vegas.. sure, you end up in the red most of the time, but it was fun, right? I'm planning to save the remaining packs for "special occasions" over the next month or so. I'll be sure to post about them when I open them, so stick around to find out what they've got hidden within their shiny wrappers.

The hobby box also included a handy checklist in it, with the base cards on one side and the autos on the other. Also, interesting to see the "groups" of the autos. The bottom of the box lists who's in each group, and the wrapper gives the odds of each group, from 1:675 for Group A, to 1:33 for Group H. I read online somewhere that the production count for the top 3 groups are 25 printed for Group A, 50 for Group B, and 75 for Group C.. though I couldn't say for sure if that's accurate.

It's funny how some of these "scarcity numbers" don't always match up with what I've seen them going for. And kinda funny to see poor Roy Face listed all by himself as the most common. Much love to the man and his still-standing single-season record of 18 relief wins.
I've got most of the lower 3 groups, and a few scattered in the rarer groups, with my "best" ones being Mike Schmidt and Frank Robinson. I'll try to post my "wantlist" soon.

So yeah, there's my lastest post regarding 2004 Topps Retired Signature Edition.. stay tuned for more.
Posted by defgav at 1:50 PM