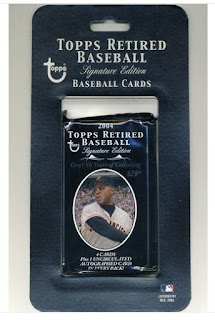 I did it again. Broke down and spent stupid-money on unopened packs of 2004 Topps Retired. You might recall not long ago, I bought a hobby box (5 packs). And now just the other day I bought 4 blister packs. I tried 3 "best offers" but settled for a counteroffer. Ended up a bit more than the hobby box cost me, but oh well. It's a thrill to open these packs, and it doesn't seem like there are many unopened left out there. There's one more on eBay from a different seller right now for $75... don't tempt me! Hopefully someone else buys that before I break down and snatch that one too. I'm sick; I need help.

I should mention I don't have a lot of money. I mean, I'm not hurting; but I'm also not at the point where I should be dropping $500+ in a month on 9 packs on baseball cards.

But I don't splurge like this very often. Pretty rarely, actually. Usually I save my paychecks, just paying rent, buying groceries, and a good beer or two down at Green Dragon. I don't buy fancy clothes or whatever. I don't even have a car at the moment. Thankfully, I live bike-riding distance to work. I do kinda actually share a car with my fiancée, so I could often drive if I wanted to, but lately I've only been driving once or twice a month. That's a lot of savings on gas and insurance.

Also, I rarely drink coffee (or even soda), so there's a big annual savings for me there. And I haven't paid for a haircut for several years.. It was kinda rough at first, but I'm now pretty proficient at the self haircut. Yeah, I'm a dork, but it looks passable and saves me time and money, so whatever.

What I'm getting at is I'm a pretty frugal guy for the most part, so I feel ok with blowing more than I should from time to time on something that makes me happy.

Back to these cards.. man, the chance of scoring a hit card to justify even half of what I paid.. pretty slim. I'm sure I will end up kicking myself. If I wanted to spend a lot of money on cards, I could have picked up a '57 Mantle, a Gaylord Perry rookie, and/or any other number of cards in my mind's wantlist (yeah, I need to type up a list one of these days to put it on the blog and see if I can work out any trades or something). But yeah, as I say, it's fun and exciting opening a fancy pack of baseball cards.

It's gotten so bad that I actually dreamt about opening these packs last night.. not once, but twice! The first dream, I pulled a Willie Mays/Ernie Banks co-signers card. I was stoked since that's a very good "hit", though honestly I would probably sell that card if I pulled it. I already have an Ernie Banks auto card (one of those Nabisco cards I sent away for in the early 90s), and if Willie's signature is as strange as on the other co-signer I've seen a scan of, I can't really get excited over it. So yeah, I'd probably rather eBay the card off for a few hundred bucks. But, *sigh*, it would be a great problem to have.

In the second dream, I pulled a John Candelaria auto. Not as sexy of a pull, but I need that one, so I was happy with it, and was bummed when I woke up and realized it was just a dream.

But yeah, I need to rip open some more of these and hopefully move on with my life once I'm through these 7 I've got left.

At least I'll get fodder for future blog posts out of ripping the packs. These 4 should arrive soon, and I'll likely crack them open quickly (rather than saving them for special occasions like the packs I bought earlier). Check back soon and join in on the exciting ride and see if I taste the joys triumph, or more likely, become crestfallen at getting more cheap Bobby Grich autos.
Posted by defgav at 12:56 PM