Welcome to the first of a new series here at Baseball Card Breakdown! One True Rookie™ posts will feature a guy who only had one actual rookie card during the time of multiple card companies.

(Disclaimer: Hopefully my post ideas are reasonably fresh. I am somewhat new to the baseball card blogosphere, so forgive me if I retread on ground already covered by other blogs. I assure you I strive for originality, and will never blatantly rip off another blog, but here in 2013, there are few things that haven't already been done, especially in regards to old baseball cards. I'll post about topics/cards I find entertaining, and my apologies if anything I do has been covered before. Thank you.)

To explain the premise a bit more: For a long time, Topps was the only game in town when it came to full-sized baseball cards sets, only briefly given competition by Bowman and Fleer. And so for 99% of players playing in the 50s through 1980, their first Topps card was undeniably their rookie card.

But in 1981, Donruss and Fleer came onto the scene and made things interesting. While all 3 companies gave cards to pretty much the same 500+ players, there were occasionally variances in guys chosen to have a card. Sometimes a journeyman infielder would be snubbed by one or two companies, but given a card in another's set. Sometimes a great player who retired recently after the previous season would be denied a "send-off" final card (Topps being especially infamous for this), while the other companies would be gracious enough to issue a card with complete career stats (Fleer especially).

And of course, the 3 companies would sometimes differ in which prospects they deemed worthy of having a place in their set. Most of the time, they agreed. But from time to time, one company would "guess right" and put out a card of a kid who went on to great things, leaving the other companies caught red-faced, scrambling to include the player in their traded/update sets. And sometimes, it would be a year or two till the prospect in question broke onto the scene, making the sole company who gave him a card way-back-when look like magic fortunetellers.

By 1990, the marketplace had become inflated by Score, Upper Deck, the reintroduction of Bowman, and the revamped Leaf set. Soon thereafter, things really became a mess, what with Stadium Club, Fleer Ultra, Pinnacle, etc.

So for this One True Rookie series, I'm limiting the range from 1981 to 1990, back when there really were just a handful of options for a guy's rookie card.

For the first entry, I've chosen one of my favorites:
1986 Donruss #28 Fred McGriff 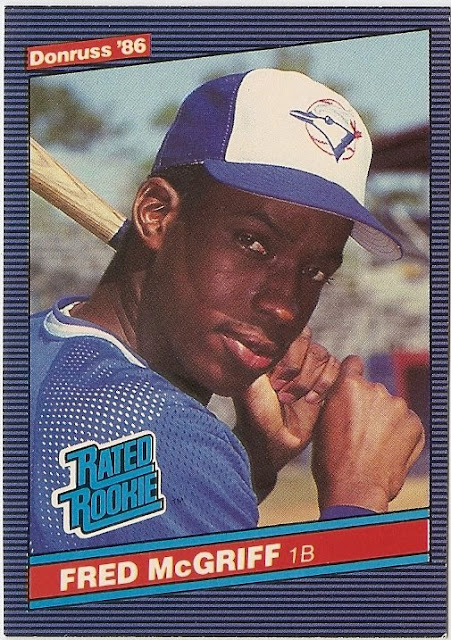 The guy in charge of picking Rated Rookies really came through for Donruss in '86. The fact that they were the only game in town with a Jose Canseco rookie card not shared with Eric Plunk (Fleer) must've helped them sell a lot of packs back then. But one slow-burn prospect who turned out to be a brilliant pick for them was Fred McGriff.

When the 1986 season started, McGriff had yet to make his major league debut, and his minor league numbers were promising but not exactly explosive, so it's no shock that Topps and Fleer didn't find a place for the Crime Puppy, as I'm sure he was called back then. But Donruss saw something in him and not only gave him a card, but proudly emblazoned it with the prestigious Rated Rookie logo. 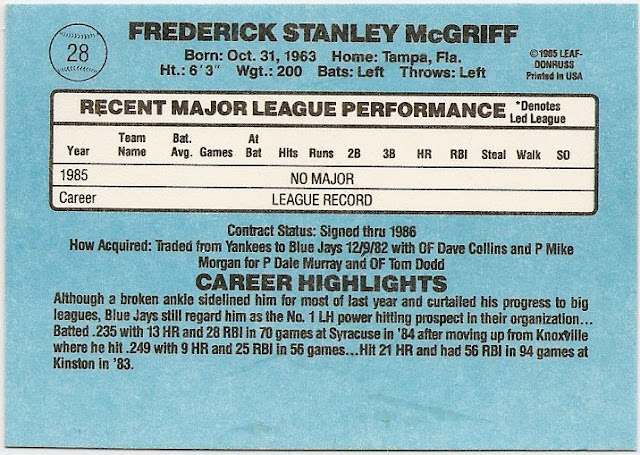 Back then, collectors must've thought he was destined to be another RR dud (the list of Rated Rookies who never amounted to much is probably just as long as those who did go on to have respectable careers, if not longer.. hmm, perhaps that could be researched as a topic for a future post?). Fred's 1986 season came and went with him only popping up for an unimpressive 3-game cup of coffee with the big league club (1 single in 5 at-bats, with 2 strikeouts) after a lukewarm season in AAA (.259 with 19 HR). 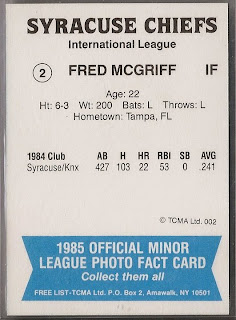 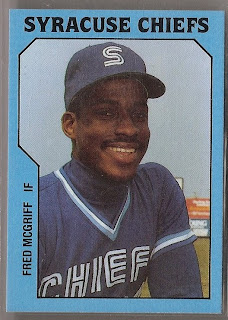 When the 1987 baseball card sets came out, Topps and Fleer again looked the other way, with only Donruss standing by their man and giving him another card in their set. His '87 Donruss card is very often mistakenly called his rookie card by collectors. It's hard to blame them when you turn the card over and see he only had 3 games under his belt at the time.

However, that year McGriff made the club out of spring training and didn't look back. He put in a solid rookie campaign, clubbing 20 home runs in under 300 at-bats mainly in a left-handed DH platoon role. Topps finally granted him his own cardboard in their 1987 Traded set, with Fleer following suit in their 1987 Update. Donruss got to gloat, including him in their The Rookies set, and perhaps in a cocky "suck on that, bitches!" gesture to Topps and Fleer, used a picture of Fred spitting while at bat. 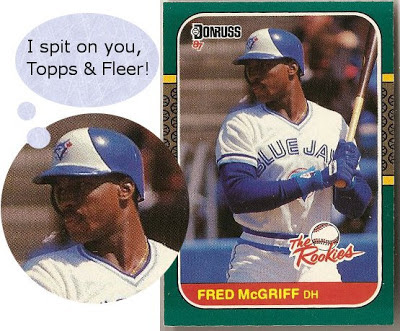 The next year, Fred was the Blue Jays' everyday first-baseman, and broke out with a terrific season, batting .282 with 34 home runs and 100 runs scored. He was included in all 3 major 1988 sets (well, 4 counting newcomer Score), with collectors getting their first chance at pulling a McGriff from a pack of Topps or Fleer, as they looked back to check if they had any of his earlier Donruss cards.

1989 saw Crime Dog win his first HR crown with 36. He had similar power numbers in 1990, plus got his average up to .300. At the end of the year, he was involved in a blockbuster trade. Toronto sent him and Tony Fernandez to the Padres for Roberto Alomar and Joe Carter. Speaking as a kid in San Diego at the time deep into my burgeoning love of baseball, this was a huge deal. I was sad to see Robbie and Carter go, but quickly warmed to the new guys. In 2 and a half years for the Friars, Fred hit .281 with 84 home runs (including his 2nd and final HR title in '92 [35]). Sadly for me, San Diego shipped him off to Atlanta in mid 1993 for little in exchange. But the move worked out well for Fred, as he won the World Series with the Braves in '95. This would prove to provide him with his only ring, though he put up excellent lifetime postseason numbers (.303 with 10 HR and 37 RBI in 50 games.)

McGriff spent the next several years consistently putting up good average and power numbers, moving on from Atlanta to Tampa Bay (his hometown) in 1998, and then to the Cubs in 2001.

The next year, he tried to rekindle some mojo with Tampa Bay, but after a sub-Mendoza Line start, the Devil Rays released him near the end of July. He lingered on the free agent market for a while, hoping for another opportunity, but wasn't able to catch on with another team for 2005 and had to call it a career. He now works in the Rays' front office and I believe also co-hosts a radio show in Tampa. 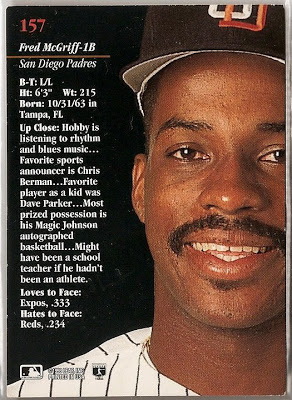 Fred McGriff finished with 493 home runs. It's always frustrating as a fan-- especially a stat-minded fan-- to see a guy fall just shy of a landmark number like 500 HR (I'm sure it's frustrating for the player, too). You can't help but to imagine if he had just one more decent season left in him..... [daydreaming]

It would definitely have bolstered his Hall of Fame chances to crack the big 5-0-0. So far in HOF voting, he's been polling steadily at about 20%.. so his chances of getting in are not looking great at the moment. But taking a hard look at his numbers, he's right there with other guys who are in or likely to get in when eligible. The very cool mathematical formula-based site Hall of Stats scores McGriff a 95, which is quite good, but falls short of the 100-point threshold for induction to their elite group. Meanwhile, his Baseball-Reference page lists these ballplayers as most-similar:
Willie McCovey (887) *
Willie Stargell (875) *
Jeff Bagwell (865)
Frank Thomas (861)
Carlos Delgado (857)
Billy Williams (851) *
Gary Sheffield (850)
Andres Galarraga (850)
Jason Giambi (832)
Eddie Mathews (827) *
* - Signifies Hall of Famer

Very nice company indeed, with several Hall of Famers and probable future HOFers. It should also be noted that Fred always seems to be described as a genuinely nice guy who always does the right thing, on and off the field. And I've never heard his name brought up with steroid implications. Throughout his career, he was a tall, slender guy with a tight, pretty swing. (Not one of those muscle-bound bruisers whose heads got rounder and rounder over their careers.) Unfortunately, all the juicing going on during his playing years most certainly causes his great power numbers to be diminished when looking at the era as a whole. In 1988, he was 2nd in AL home runs; Who was first? Jose Canseco. So yeah, you can see how roided-up guys stole some of his glory throughout his career. Hopefully HOF voters are eventually able to sort out the legit stats from the bogus, and Crime Dog will be enshrined in Cooperstown before long.

And when he does, that's yet more bragging rights to Donruss for giving the kid a rookie card long before anyone else. His one true rookie.