This is the second installment of a feature focusing on a player for whom only one major card company issued a rookie card.

Joe Carter and Fred McGriff are linked together in the minds of many baseball fans. The sluggers were essentially traded for each other (with Roberto Alomar and Tony Fernandez also being traded for each other concurrently). In addition to suiting up for the Blue Jays and Padres (as result of that trade), Carter and McGriff both played some for the Cubs, too. Each guy ended his career tantalizingly close to a home run milestone, with Joe winding up at 396 and Fred at 493.

And for a baseball card collector, a big similarity is that each player only has one true rookie card, both being Donruss "Rated Rookie" cards. Since McGriff's 1986 card was the subject of the first post in the series, I figured Carter would make a good follow-up. 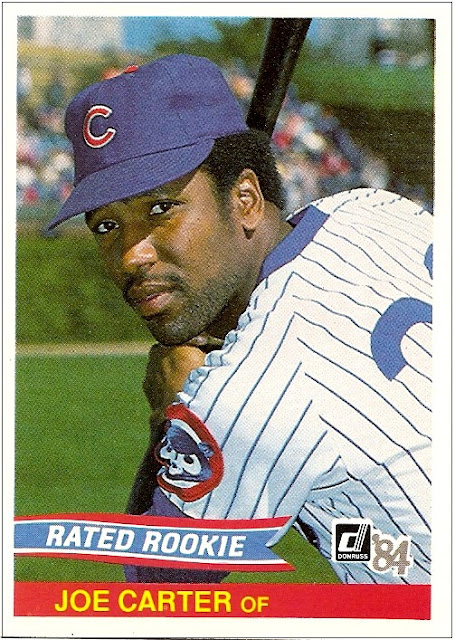 From their debut in 1981 through 1983, Donruss put out a respectable-- yet unremarkable-- design. Their first notable subset, "Diamond Kings", was introduced in 1982, which featured oil paintings of star players (one from each team) done by noted baseball artist Dick Perez.

While the addition of Diamond King cards was a good start for the company to develop a unique identity in the baseball card market, it wasn't until the 1984 Donruss set that card collectors really seemed to be impressed. That year, their set featured a fresh pseudo-borderless "wavy" design (breaking away from the similarity of the company's "boxy" designs up to that point), lower production numbers than other sets of the era, and the introduction of an intriguing new subset, Rated Rookies.

A "rookie" designation on a baseball card was nothing new; Topps had many past sets with "star rookies" (etc.) and multiplayer rookie cards, not to mention the All-Star Rookie cups commemorating a player who had a good rookie season the year before. But the company was never very consistent about having a distinct rookie subset. For a while, they even did away with rookie cups (in 1979) and multiplayer rookie cards (in 1983), leaving no cards that screamed out ROOKIE! to the mid-80s collector.

Donruss smartly filled that void in 1984. New York Daily News writer Bill Madden selected 20 young prospects to have their cards graced by a Rated Rookie banner where the team name typically went (it wasn't until the next year that the iconic blue RR logo first appeared). Obviously, betting on prospects will yield mixed results. Many Rated Rookies never did squat in the bigs, whereas future top stars (such as Don Mattingly and Darryl Strawberry) apparently weren't rated high enough in Mr. Madden's eyes to get the RR distinction. The website Mental Floss has a great article looking back at the 1984 class called How the Original Donruss Rated Rookies Turned Out.

In 1985, Fleer would get into the Rookie-promoting game by including 2-on-1 "Major League Prospects" cards. Topps brought back the All-Star Rookie cups in 1987, as well as reintroducing the "Future Stars" subset that year, previously used for 3-on-1 rookie cards in 1980 through 1982, but now they were on individual player cards and had a nifty shooting star logo. You can easily imagine the meeting of Topps executives.. "Kids love that Rated Rookie stuff.. we need to come up with something like that!"

But anyways, this post is focusing on Joe Carter's Rated Rookie.

Carter had a great collegiate career at Wichita State, I'm assuming, since he was drafted #1 by the Cubs, the 2nd player chosen overall in the 1981 amateur draft, just behind Mike Moore (P, Mariners). He put up some impressive numbers in the minors and got called up to Chicago for a cup of coffee near the end of the 1983 season, but struggled against major league pitching. Take a look for yourself: 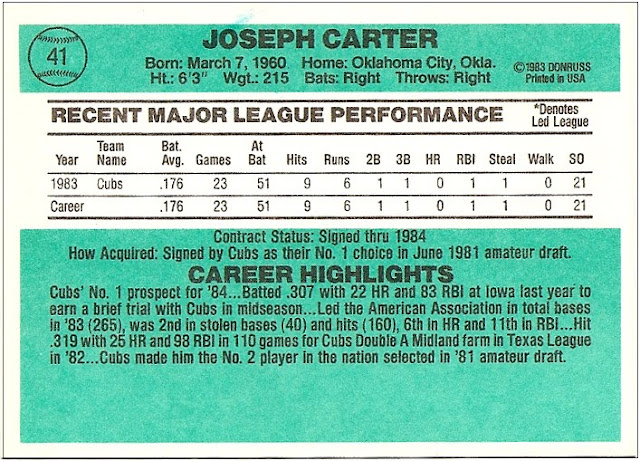 Despite the weak MLB debut, he still had a lot of promise. Topps and Fleer left him out of their 1984 sets-- he didn't even make it into the Traded/Update sets-- so Donruss was the only game in town for a Joe Carter card till '85 rolled around. It was a great looking card, too, featuring a close-up of determined young Joe posed in a batting stance at Wrigley with the ivy in the background.

Joe started 1984 back in AAA, and his minor league success continued (.310 and 14 HR in 61 games). The Cubs, however, didn't see him as essential in their future plans, and shipped him off in a big mid-season trade. He was sent with Mel Hall, Don Schulze, and Darryl Banks to Cleveland for George Frazier, Ron Hassey, and Rick Sutcliffe. I suppose the trade worked out well for both teams, as Sutcliffe went 16-1 for Chicago, winning the Cy and helping the Cubs reach the playoffs that year for the first time in since 1945.

Carter, however, would have to wait a while for a taste of October baseball. But he was able to blossom as a solid major leaguer in the Indians' outfield. In 6 years in Cleveland, he batted .269 with 151 homers. Highlights included 1987, when he joined the 30/30 Club (31 HR, 32 SB). He won the AL RBI crown in '86 (121), and later led the league in games (all 162) and at-bats (651) in '89. While not known as much of a contact hitter, he did a great job getting wood on the ball in 1986, collecting 200 hits with a .302 average (both marks he wouldn't come anywhere close to matching again). For his career, he wasn't picky with what he swung at, typically striking out about 3 times as often as he walked. In the field, he saw time at all 3 outfield positions, occasionally playing at first or DH-ing, and was known as a less-than-stellar fielder.

After the 1989 season, he was traded to San Diego in exchange for Sandy Alomar, Carlos Baerga, and Chris James. The deal was a bust for the Padres, as Joe delivered a down year for them in 1990, batting just .232 with his power dipping. For the Indians, Sandy Alomar would go on to win Rookie of the Year that year, and despite being injury-prone for much of his career, became one of the game's best catchers for many years. Baerga also had a few real nice years. 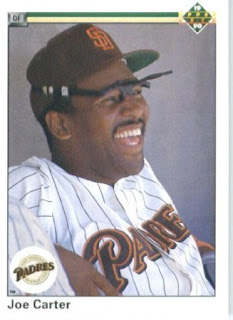 Maybe it's because 1990 was the year my love for baseball first exploded and I lived in the San Diego area, but I always mistakenly remember Joe Carter as being a long-time Padre. Truth is, they shipped him off after only one season, in the aforementioned Fred McGriff deal with the Blue Jays.

The pieces really fell into place for those early-90s Toronto teams, culminating in back-to-back championships in 1992 and 1993, with Carter being a big part of their success with many clutch hits. He of course carved himself a permanent place in baseball history when he cracked a dramatic walk-off homer to end the 1993 World Series. 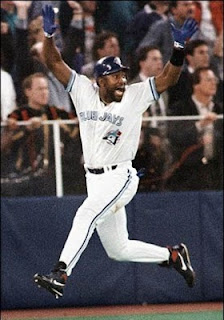 After a few more years with the Jays, Joe wrapped up his career in 1998, splitting that final year with the Orioles and Giants. Since retiring, he's done some broadcasting and started a celebrity golf tournament that benefits the Children's Aid Foundation.

Players with similar career stats include Dale Murphy and Ruben Sierra. When he was eligible for the Hall of Fame, Carter received just 3.8% of the vote and was dropped from future ballots. Unlike McGriff, there aren't many baseball fans clamoring for his induction. In fact, sabermetric advanced-stat minded types are quick to call him overrated, pointing to his poor defense and lackluster slugging and on-base percentages despite good home run and RBI numbers. 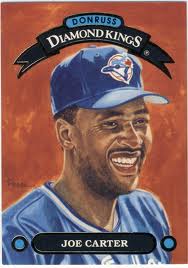 But still, the guy put together a solid career. And of course that World Series home run is one of the most memorable moments ever in the sport. And he only has one true rookie. Score another point for Donruss for being the only major brand to give him cardboard when he came up. They took a risk, and he proved them right, arguably having the most successful career out of the original 20 Rated Rookies in that Class of '84.
Posted by defgav at 7:49 AM