There was this shadow box that showed up on eBay not long ago commemorating Kirk Gibson's dramatic home run in the 1988 World Series. What caught my eye was the inclusion of a Kirk Gibson 2004 Topps Retired Signature Edition certified autograph. Anyone who's been reading this blog for a while knows that I'm bonkers over this set, and my current foolish obsession collecting goal is to obtain all 76 autographs in the set. And I needed that Gibby. Also included were an Eckersley auto from the same set (I already got that one) and a commemorative postcard signed by Gibson.

I just recently started using an eBay sniping site (head nod to the site Gixen and user Junichi for letting me know about it in a previous comment).. very handy and less stress than trying to be around to place a "live" bid near an auction's end. So I entered a sniping bid basically just a bit over what I had recently paid for just the Eckersley card alone. I ended up with the winning bid (just 3 cents under my max bid) and got it. Cool. 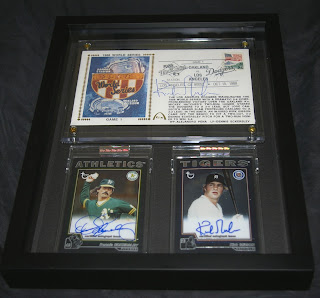 This is a neat display, but again, I really just wanted it to scrap out the Gibson card (which I don't think I've seen for sale elsewhere yet). But I liked the concept of this display. Some things about it I wasn't crazy about, though. The Gibson card features him in a Tigers uniform, so it doesn't really fit the theme. Plus, since the postcard thing-- ("Gateway cachet" is apparently the medical term for this particular type of memorabilia item.. and it's not actually a postcard, but an empty envelope)-- is also signed by him, it seems a bit redundant to have 2 autographs by the same guy in one display.

So I looked around for a nice-looking Gibson card I could swap in. I found just the ticket in a 2005 eTopps card. It commemorated the home run in question, and featured a photo from that famous trot. Plus it was in one of those encased "uncirculated" cases, so it fit the feel of the display (and matched the encased Eck). And it was a refractor, so it was all purdy n' shiny. According to the seller, only 714 were made and most are kept in online portfolios (I think this is my first eTopps card.. I still don't totally get the concept).

So I got the card and swapped it in there. Pretty pleased with how it turned out. 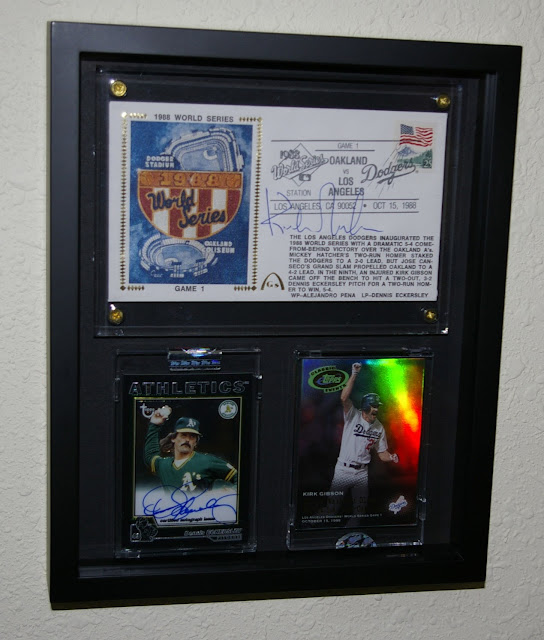 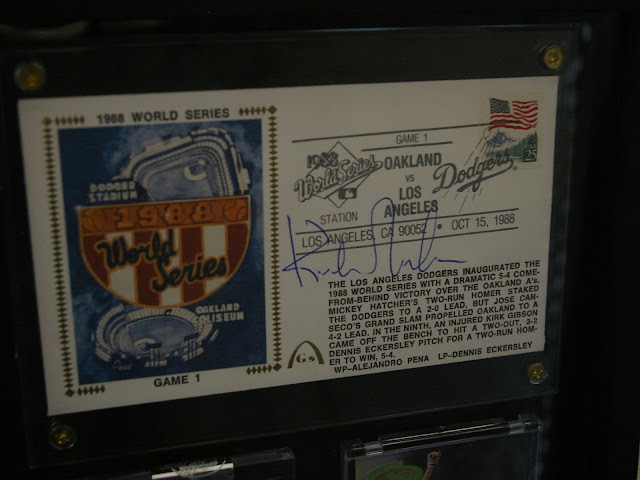 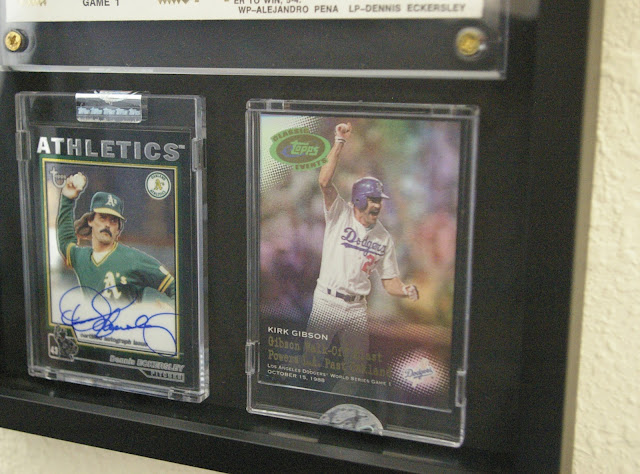 While I'm not a huge Dodger fan, as a baseball fan, I definitely have a reverence for that magic moment. So I'll proudly prop this puppy on my wall for the time being and admire it when it catches my eye. While I'm not anxious to part with it, I'll let it be known to y'all that I'm open to trade offers. I'm specifically looking for "upper tier" guys I still need from the 2004 Topps Retired autos.

Here's the original details from the seller:


THIS ONE FEATURES:
A GATEWAY CASHET ENVELOPE CELEBRATING THE 1988 WORLD SERIES HOME RUN BY KIRK GIBSON IN GAME 1.
THE ENVELOPE HAD BEEN PLACED IN AN ACRYLIC SCREW DOWN HOLDER.
IT FEATURES A SILK INSERT SHOWCASING DODGER STADIUM AND THE OAKLAND COLISEUM.
IT IS POSTMARKED OCTOBER 15, 1988 THE DAY THE FAMOUS HOMERUN WAS HIT.
THE NEXT 2 CARDS ARE A 2004 TOPPS CHROME CERTIFIED AUTOGRAPH BLACK CHROME REFRACTOR. (ed. note: the cards aren't really refractors, as I could tell from the photos.)
EACH OF THESE CARDS HAS A SEAL FROM TOPPS AND ARE WHAT ARE CALLED ENCASED.
IF THE SEAL IS BROKEN, IT VOIDS THE AUTHENTICITY OF THE AUTOGRAPH. BOTH SEALS ARE INTACT.
THERE IS ONE AUTOGRAPHED BY KIRK GIBSON AND THE OTHER AUTOGRAPHED BY DENNIS ECKERSLEY.
EACH OF THESE CARDS HAS A TOPPS HOLOGRAM STICKER ON THE BACK OF THE CARD.
I MADE THESE SHADOW BOXES MYSELF.
I USED BRAND NEW CARD CASES THAT DO NOT HAVE ANY SCRATCHES (EXCEPT FOR THE ENCASED CARDS IN THIS AUCTION).
I USED A 2 LAYER VELCRO TAB SYSTEM TO ADHERE EACH ITEM TO THE BACKING. (ed note: I was able to take the velcro off the Gibson auto card without too much trouble or any damage to anything, and stuck it on the the refractor I swapped in.)
THIS CREATES A FLOATING EFFECT FOR EACH ITEM.
THEY WILL NEVER PEEL OFF OVER TIME.
THE BACKING WAS CUSTOM ORDERED FROM A FRAME SHOP WHICH HAS A TEXTURED FINISH.
THE FRAME INSIDE IS AN 8X10, BUT, THE ACTUAL FRAME ITSELF IS 9X11.
I CLEANED THE GLASS FROM BOTH SIDES.
EACH PIECE IS READY TO HANG.

Oh, and here's an attempt to show you the glory of the refractor, though it kinda turned out terrifying.

Kirk Gibson is being attacked by flying rainbow banshees! Save him!
Posted by defgav at 12:23 PM