Well, damn. Rocktober is off to a rough start. A horrific mass shooting at a music festival in Las Vegas, and the death of one of my all-time favorite musicians, Tom Petty. Life really sucks right now. It's hard to get motivated writing about cards (and music, as I was aiming for on the blog this month).

I was looking around my card room for something I could bust out a quick post on. Howabout this.. 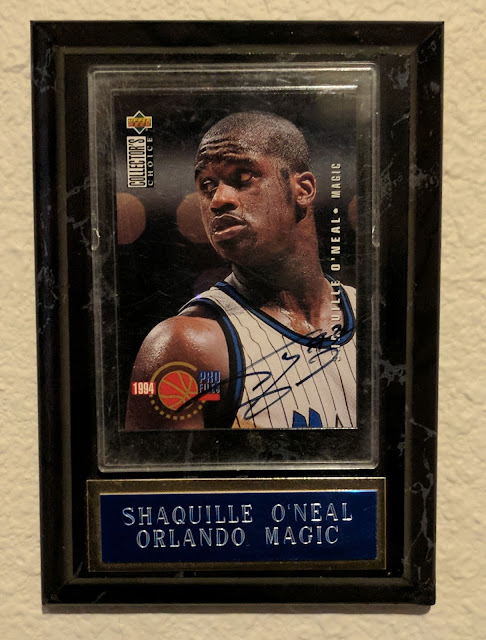 Tom Petty was from Florida, so here's an Orlando Magic card. It's one of my best basketball cards and I've been meaning to feature it on the blog for a long time, just haven't gotten around to it till now. It's a Shaquille O'Neal auto in a pretty legit display. I got the plaque back during my Listia days for what I recall was a relatively tiny amount of Listia credits (considerably less cash value than the postage the seller paid to send it to me). It included a Topps rookie card, I think, which was fine but didn't look too impressive in there. I wanted to "upgrade" the card to an auto, so I kept an eye on eBay for a while. It had to be a card from his Orlando days to jive with the nameplate, which really limited my search since most of the autos that pop up seem to be from his Lakers and Heat days. I eventually landed this 1994 Upper Deck Collector's Choice Pro Files card for a solid price. 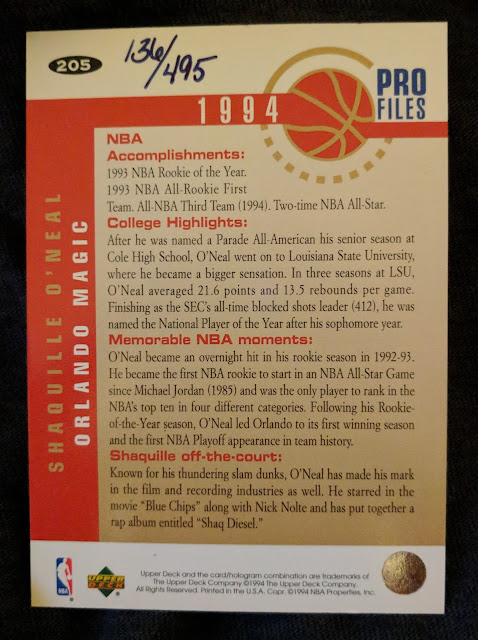 Here's the back of the card. As you can see, it's hand-numbered 136/495. I'm under the impression that this is a pack-inserted certified auto, but I haven't been able to confirm that. Perhaps someone more educated in basketball cardboard history could weigh in on this for me.

I was never like a huge Shaq fan, but always liked him ok. Interesting, funny dude, and pretty dominant on the court in his prime. But yeah, I stumbled upon a decent display piece and was compelled to upgrade it with an autographed card, and here we are. I suppose this also sort of fits in with my musical theme for the month since he's put out a few albums as a rapper, though I never really listed to any of his stuff besides maybe catching a few short clips on TV.

Tom Petty on the other hand.. man, I'm gonna miss him. I think he's 3rd on the list of most songs in my iTunes library, behind only the Beatles and David Bowie. I'll have to work up a post later in the month with some of my favorite songs of his and stuff.