Madlockin' it down / My Jane's addiction

A few weeks ago, I did a post on my Bill Madlock PC. The catalyst for that was a guy had earlier contacted me inquiring about a copy of the 1973 Topps-style custom I made. I was happy to send one off to him and help out a fellow Mad Dog collector. In return, I just asked if he could take a look at his dupes and see if he had a card or two I needed (with that post being a guide of what I already had).

Well, Steve delivered more than I could have hoped, with a great stack of Madlock cards that finally put the PC over the 100-card mark. Getting Bill into my Hundred Card Club feels good, and was tougher than you might expect; you gotta remember he doesn't have a ton of cards out there, being a semi-star player who retired just as the "junk" era really kicked into gear. 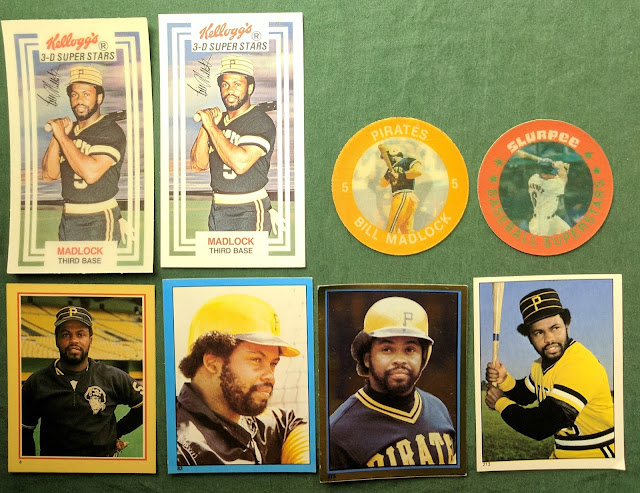 Glorious oddballs! A 1983 3-D Kellogg's card and a non-3-D version? First time I'm seeing one of those. Perhaps it's a proof card or something? Also got a couple Slurpee cup-bottom discs, including one 3-player disc (Garvey showing here). And a bunch of 80s stickers. 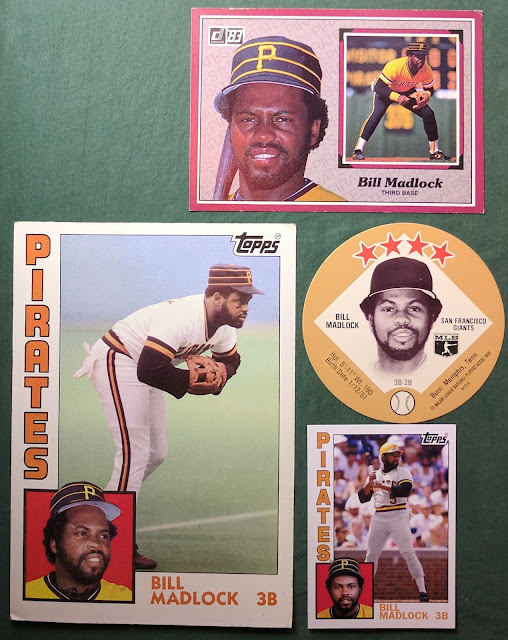 Moving from small to large, with some oversized cards, and a standard 2012 Archives card for scale (and contrast to the 1984 jumbo). Topps hasn't given Mad Dog much love lately, as the '12 Archives represents his last inclusion on a major checklist (Well, he's also has autos in 2013 Topps Supreme, but then nothing after that besides buybacks as far as I can tell). 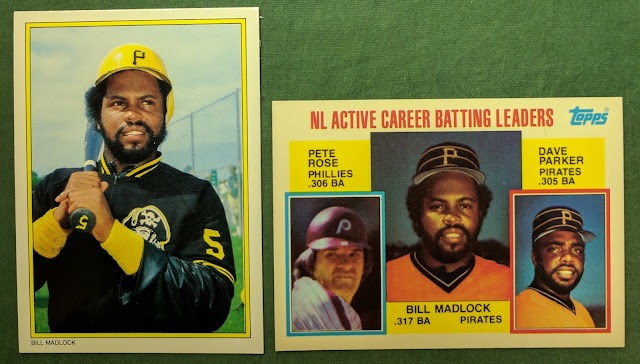 And while it may be hard to appreciate in the picture, here are a couple glossy cards. Yes, I still need the standard NL Active Career Batting Leaders card to complete my Topps flagship run of Madlock, but now I've got a Tiffany version of it. Pretty cool. 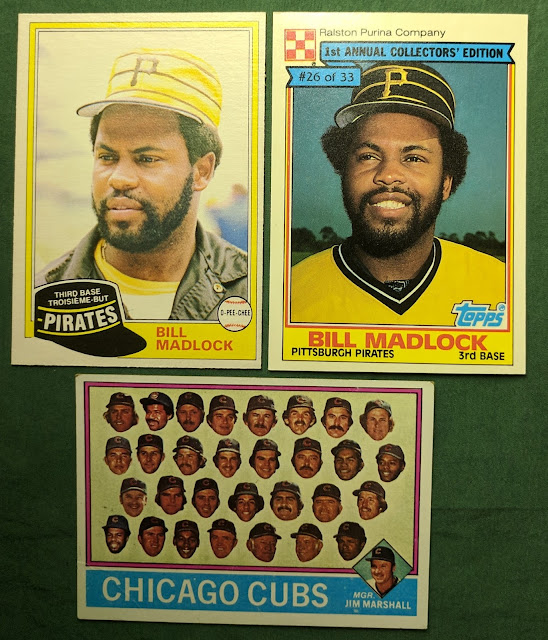 More miscellany, with an '81 O-Pee-Chee, Purina card, and a Cubs team card with Bill's floating head in the lower left. 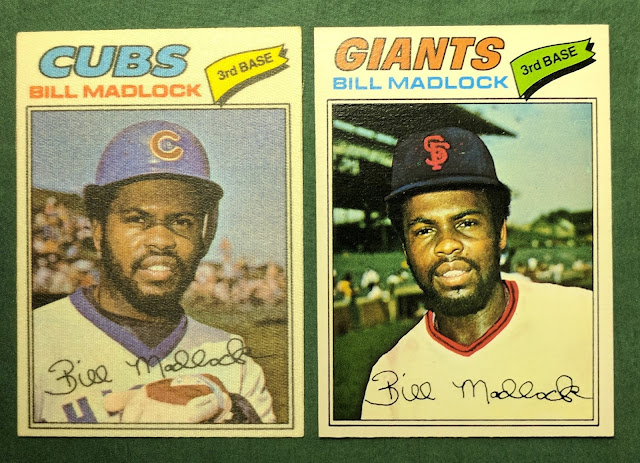 Probably the cards from Steve that I got the biggest kick out of were these variations from 1977. On the left is a cloth sticker. On the right is the OPC version of Bill's '77 card, featuring a different photo than his Topps card. Gotta love old photo variations like this, even with such a completely pathetic job by the airbrush artist. Cool card! 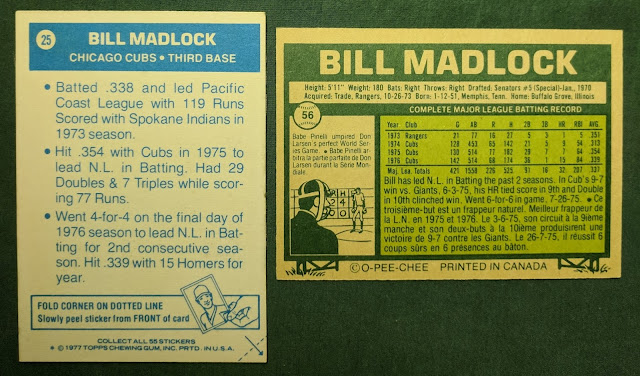 Big thanks for the trade, Steve! You definitely gave my Bill Madlock collection a nice boost!

Let's work in a Rocktober segment (all this month I'm trying to show off tangible highlights from my music collection on the blog). Since most casual music fans best know them as the rock band with "that barking dogs song" I thought pairing Jane's Addiction up with a Mad Dog post made sense.

[Heads up: there's a slightly NSFW image coming up (a tasteful nude female sculpture on an album cover). You might want to leave the post now if you or someone currently around you are easily shocked by stuff like that.]

But really, I don't know any big Jane's fan who would even put "Been Caught Stealing" in their Top 20 list of the band's songs. It's a catchy song with a fun video that screams "1990", but they're deeper cuts are pretty great. When I left card collecting in mid 1993, I pretty much switched my collecting habit from baseball to music, and Jane's was my #1 band. I was a huge collector/fan of there's, as well as any related bands featuring Jane's members, such as Porno For Pyros. I spent many hours hunting down rare import CDs, cassettes of any live recording I could find (regardless of sound quality-- I wanted them all!), and whatever else (I even had collectible candles. Candles! Warner Bros. actually put out promotional candles to promote a song.)

My fandom has waned as this millennium has gone on (the band is still technically together, though a shell of their glory years-- their songs do not lend themselves to be sung by a guy in his 60s whose voice is shot), but yeah, back in my teenage years and early 20s, I was all about Jane's Addiction.

I've since parted with much of my huge JA/related collection, and will pare it down further in my latest CD purge, but here are some keepers.

I met Perry Farrell before a show--Wow, I just looked up the date and it turns out it was exactly a decade ago! Cool coincidence that I'm posting this today-- I was too starstruck to talk to him much, but I sheepishly asked for his autograph and he kindly obliged, signing my Nothing's Shocking CD cover. He and his wife were really nice to me and even offered to put me on the guestlist for the show, but I had already bought my ticket in advance so I didn't need it. But I did get in to watch much of the soundcheck.. that was cool. It was at the same venue right on the beach in San Diego I recently mentioned where I met Mercury Rev.


In addition to being a popular frontman whose bands influenced the likes of Nirvana, Smashing Pumpkins, and Pearl Jam and paved the way for the alternative rock boom, Perry also has his place secured in pop culture for being the driving force behind the Lollapalooza music festival.


While I love Perry, the real secret weapon of Jane's Addiction was original bassist Eric Avery. He was a big musical influence on me and the reason my first instrument was a bass guitar. I was lucky enough to chat with him a few times over the years. One time in 2005 he got me backstage when he was playing with Garbage at the Street Scene festival in San Diego. He introduced me to Butch Vig, which was a huge thrill for me as a Nirvana fan. I got Eric to sign this CD single for his 1994 band Deconstruction. The silver ink smudged a little, but I think that works with the oil splatter motif of the artwork.

Deconstruction put out just one album then split, which is too bad because I love that CD (though some people have a hard time getting past Eric's vocals, which to me sound somewhere around the lower registers of Lou Reed and Iggy Pop).

The guitarist for Deconstruction was none other than fellow Jane's bandmate Dave Navarro.

I don't have Navarro's autograph, but I do have this guitar pic of his. I think I got it at the Jane's reunion show at a Mexican bar called La Cita in Los Angeles in 2008. I've seen the band like 7 or 8 times, and this was probably the best. It was a tiny little venue, super packed, electricity in the air. I vaguely recall grabbing this pic off the stage floor right after the show ended. 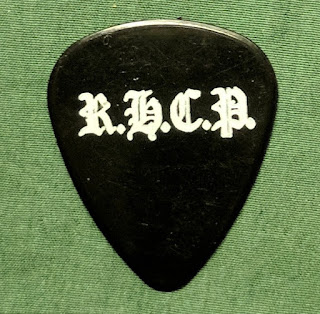 The back of the pic has "RHCP" for the other band he's famous for (in addition to his many TV appearances over the years), the Red Hot Chili Peppers, which he was in for a few years in the mid 90s.

As for the 4th member of the quartet, drummer Stephen Perkins... well I don't really have anything all that cool to show off from him, but I did shake his hand once (8/24/1996 Snow Valley Ski Resort, Big Bear, CA, Enit Festival). I asked for his autograph, but he was in a hurry so he offered me a handshake instead, and I happily agreed to that deal. Nice guy. 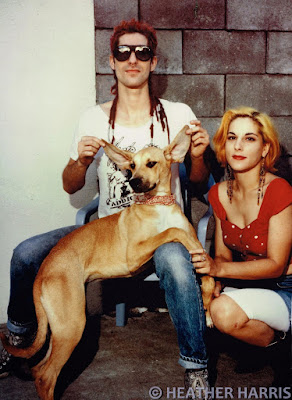 Casey Niccoli was Perry's girlfriend during Jane's original run, and was undoubtedly his muse. Many of their songs are written about her, and her likeness is on the cover of their two biggest albums. She was a contributing creative force, inspiring and being a sounding board for ideas. The classic "Been Caught Stealing" video was directed by her, even. Just a real cool lady. I was bummed that she and Perry split up shortly after the band dissolved in late 1991. (While the band would reunite a few times, unfortunately Perry and Casey would not. Perry later married some other lady who's always bragging on social media about all the fancy purses, shoes, and stuff she's spending Perry's money on, not to mention trying to ride his coattails into a singing career though she has no talent).

I caught up with Casey online several years back and she asked me for a copy of a Jane's VHS I had. In return, I asked her to sign my Classic Girl CD. She did it in style, carving into the inside cover. Love it!

Oh, and I forgot about until now, but she also gave me a lock of her hair (unsolicited, I must add! LOL) 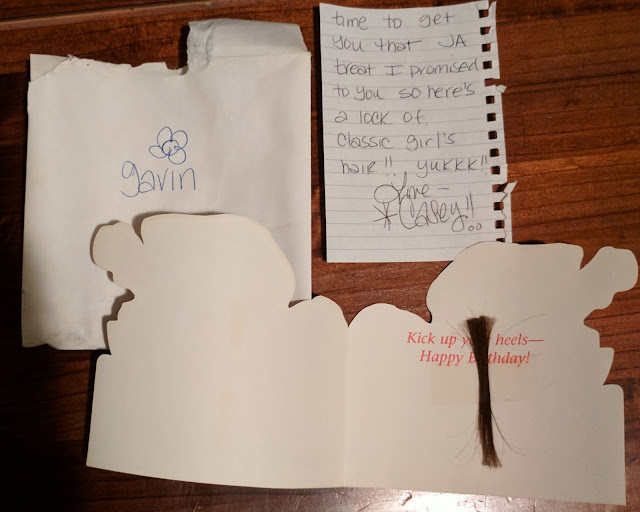 As far as I recall, this is the only hair in my collection. Yeah, it's kinda weird but still cool on some level.

Let's circle back to Bill Madlock to end the post. Back in my White Whales post a couple weeks ago, one of the cards I listed was a Bill Madlock autograph with the "Mad Dog" nickname included in the autograph. Well lucky me, researching for that post, I found an auction for one on eBay. A few days later I ended up winning it for single digits... 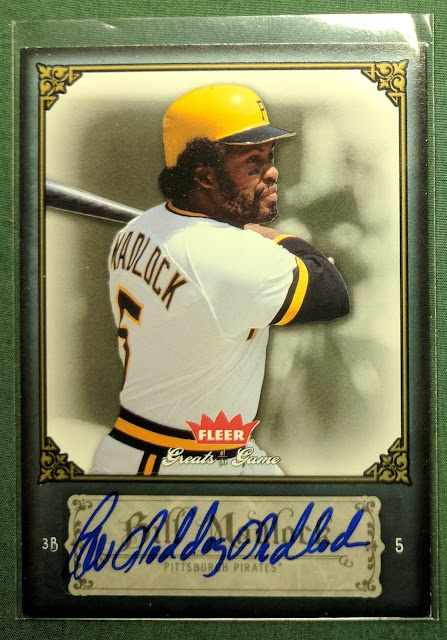 Very cool! I already had this card with the standard signature, but love the added "Mad dog" inscription.
Posted by defgav at 5:36 PM