Time to show off the vintage from my big COMCOVID shipment. 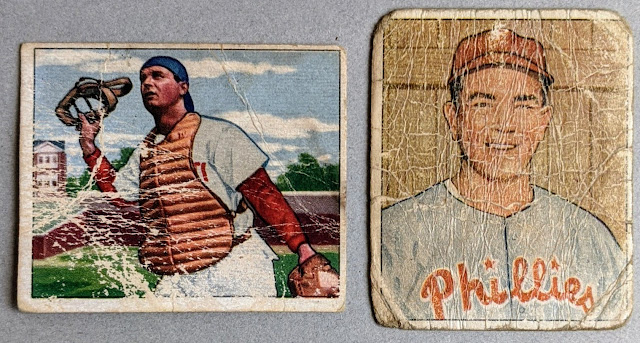 I miss finding pre-Topps beaters for cheap at the card show. This well-loved pair of 1950 Bowman cards each ran me a buck-something. Love the artwork on these!

Bob Scheffing and Willie "Puddin' Head" Jones. Sure, in a perfect world I'd love to have these in EX/NM or whatever, but I don't mind wear on really old cards. Adds to the character. These cards lived. Kids in the 50s shoved these pieces of cardboard into their pockets, played with them down by the schoolyard, and at least in the case of the Jones, apparently ran them through the wash. 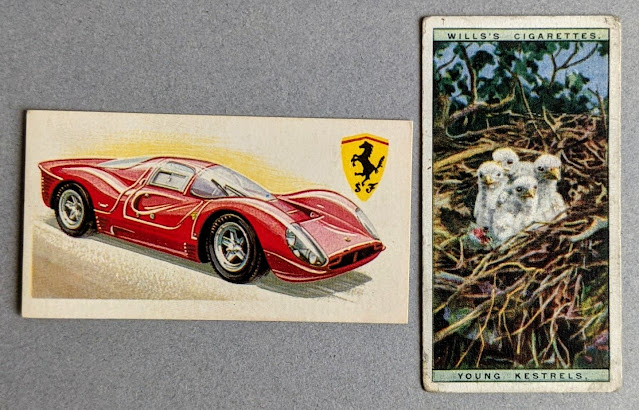 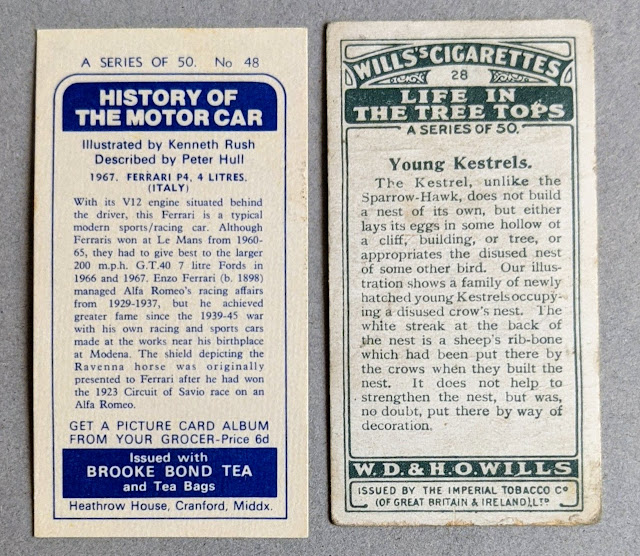 I wanna say I saw some of these History of the Motor Car cards on somebody's blog, and went out to find one for myself. This was a year ago, before I started doing my Vintage Frankenset, so that didn't play a factor, but serendipitously I had an opening at #48, so this Ferrari will be pulling into a parking spot there.
Sadly the same can't be said for the Young Kestrels or above 1950 Bowman cards, as their numbers are already filled, but I suppose you can never have enough old-ass cards, right? Pulled the trigger on the 1925 Kestrels back in September 2019 for 75¢ from COMC seller MashingDingers, who I recognize as a Twitter acquaintance of mine (who has expressed an interest in writing a guest post, so who knows, might be a Baseball Card Breakdown collaborator at some point), but I don't think I bought it because it was from him, but probably just trying to find the oldest/cheapest card available that caught my eye. 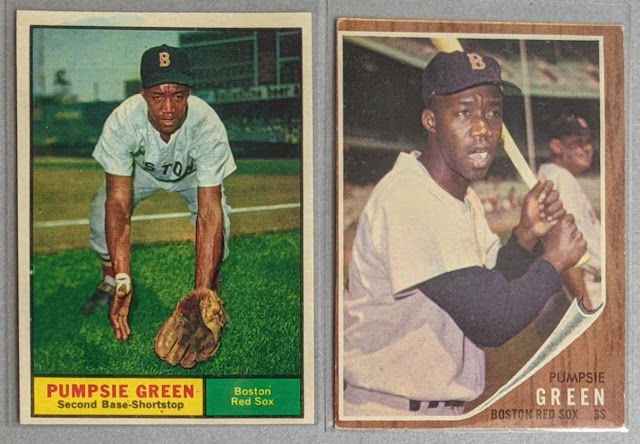 I wanted to pick up some more Pumpsie Green cards and did just that by grabbing his '61 and '62 Topps. I remember reading his SABR bio while waiting at the vet during the final days my previous pup Annie's life, so there's an additional emotional component towards getting a little PC going for him, the first black player for the Red Sox. 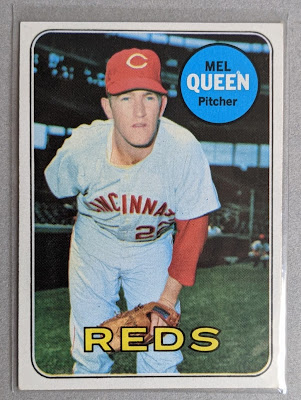 Here's an unassuming 1969 Topps card that I heard about and had to score myself a copy. The highlight of this Mel Queen card is the back.. 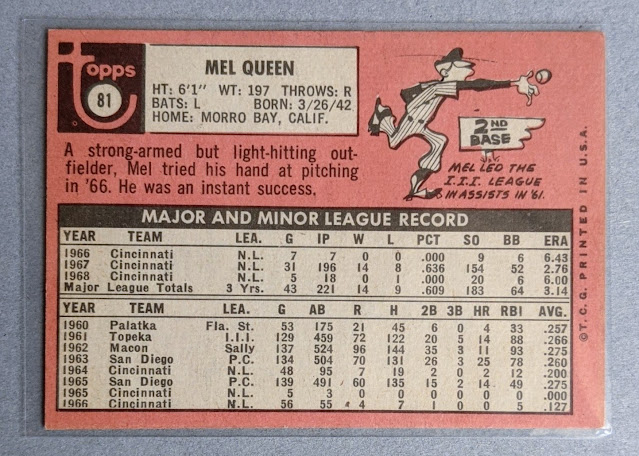 Both pitching and batting stats! Seems like Topps is usually too lazy to make a special back like this for 2-way players, so the extra effort is appreciated. 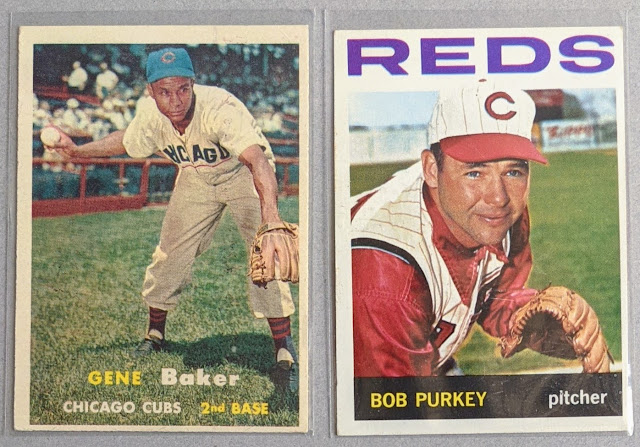 Lastly for this post, I picked up a couple cards for vintage sets I'm building. Bob Purkey is a nice semi-high number I found a good deal on for my '64 Topps set that's just over ¾ of the way complete, but one of the cards in this shipment I was most excited about is this particular Gene Baker for my '57 Topps set that's also inching towards 80% complete.
According to TCDB, 1957 Topps #176 Gene Baker is the only card in the set with error and corrected variations listed. As for which variation this one is..? Welp, it's actually a "missing link" between the two! Check it out: 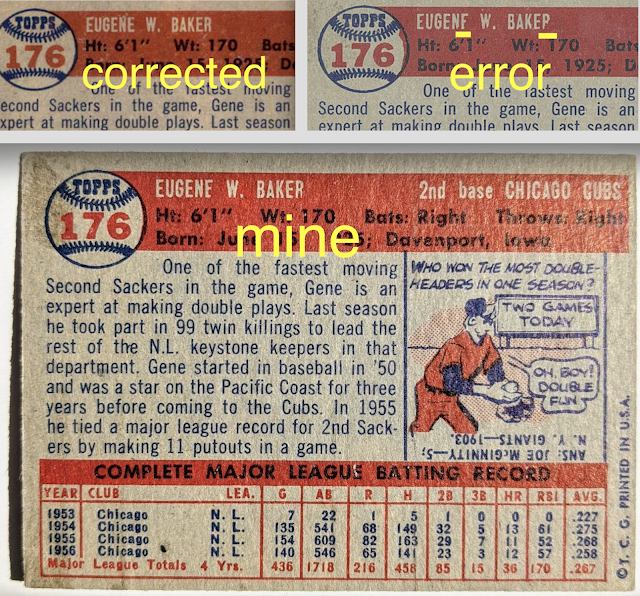 The variation involves a printing flaw with the player name on back. Apparently some of the pressings had a bit too much red ink or something, flooding the last letter of text in the player's first and last name. "EUGENE W. BAKER" became "EUGENF W. BAKEP". I found a curious copy on COMC where the troublesome letters in question are not at their full errored state, but also not quite their fully formed correct versions either. The last E in Eugene has a shorter bottom compared to the top, and the R in Baker has a noticeably thinner tail.
The corrected variation is common and typically sells for under 5 bucks in average condition. I paid $1.25 for mine last fall. In researching around for this post, all recent completed listings on eBay show the error selling for comfortably in triple digits... except for one that sold for "just" $57, but in my opinion it's a fake. Take a look: 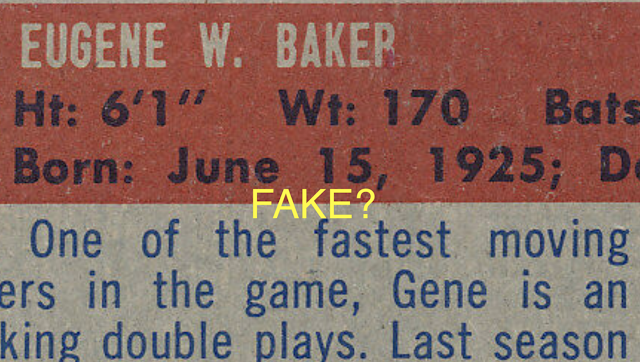 Really looks like some dipshit used a red pen to obscure the R in an attempt to increase the value of his 1957 Topps common. You can tell the coloring seems just a little off right there. And notice how the last E in Eugene is conspicuously full. If it was an authentic error variation, both the R and that E should have been affected (Correct me if I'm wrong, but they sure seem to go hand-in-hand). Yep, pretty sure this particular "error" card was faked. Lame. I feel bad for whoever bought it.
Anyways, I don't intend to drop $100+ on the error card-- no offence to Gene Baker who was an All-Star in '55 with the Cubs and got a ring as a bench guy on the 1960 Pirates-- but I'm glad to score what might be an even scarcer variation. What do you guys think, should mine be added to TCDB as a 3rd variation for the card, or would that just piss people off and I should continue to appreciate it as a printing-flaw oddity, not a true variation?
Thanks for swinging by and going down this Baker street with me.
Posted by defgav at 4:50 PM