Checking where I rank with some lesser-collected PC guys

Got a few more cards from my big shipment to document on the blog today. These here are non-HOF "fan favorite" type guys from the past.. Generally players that aren't chased by many collectors out there. It's fun to go after oddballs and whatnot from them, and maybe even take a run at completing their full run of cards, or at least trying to build the #1 PC for a guy on TCDB. 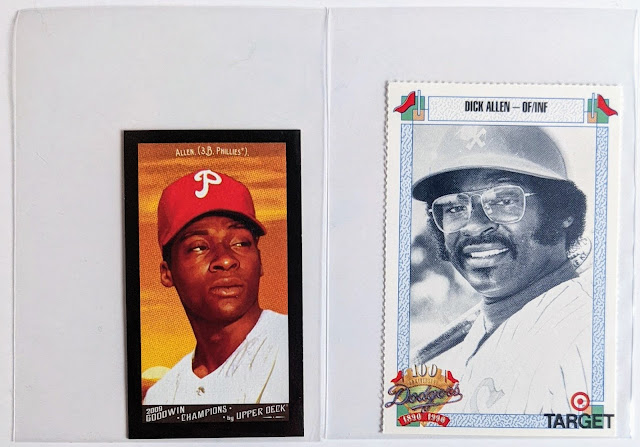 Starting alphabetically with Dick Allen-- not exactly an obscure name, but still-- here are a couple smaller-than-standard cards. That side-eyein' 2009 Goodwin Champions is one of my all-time favorites.. I've got at least a couple other versions of it, including the auto which had been a white whale of mine for a few years, and am happy to snag the black bordered mini of it now. 1990 Target All-Time Dodgers is a familiar set to me after seeing gcrl cover the whole thing on his blog a few years back, plus occasional appearances on Night Owl Cards. Sucks they couldn't have found a picture of Dick from this Dodger days to use on the card. That out of place White Sox uniform is worthy of young Richie's side-eye.
At the time of this post, Crash's #1 collector on TCDB is user "theFalcon" with 84, with the 2nd most being 61 cards. I haven't added up all my DA's or entered them into the site, but I'm probably somewhere between those two. TCDB lists 325 total cards for him... many of which are just from this year, with Dick being included in '21 Heritage and getting multiple Project 70 cards, too (none of which I've pulled the trigger on, though nice to see him getting some hobby love).
UPDATE: I clawed my way into 2nd place with 62 cards, though I had to resort to counting a couple Kellogg's cards that are currently stored in setbuilds not the player collection, if you wanna get technical about it-- but whatever, I own the cards. I'd probably be around 70 cards if I counted more set stuff like that.
BTW, I already owned the above two cards, dang it! Good thing I'm trying to keep better track of my collection now. Oh well, I'll add the dupes to the "for trade/sale" inventory I've been meaning to build up on TCDB to hopefully see more trade action.

Rod Beck has 414 total cards listed. These are 3 cheap parallels I probably needed.
1995 Upper Deck - Electric Diamond Silver
1995 Score - Hall of Gold
1997 Donruss Limited - Limited Exposure (with John Wetteland on the other side)
Shooter's top collector on TCDB is user "bronnerea" with 164 cards. I can't top that, but think I'd have a shot at being in the top 10 were I to check in mine to the site.

Ken Caminiti is a guy I have a lot of cards of, but still probably wouldn't crack the top 10 on TCDB ("Expos1990" rules comfortably with 597 cards.. probably over 3 times as many as me). Ken's represented in this order by a thick, leathery insert (1997 Topps Stadium Club Patent Leather --pretty sure I saw one of these get a thumbs-up on Fuji's blog and had to grab one for myself) plus a couple $1 buybacks. And if it's buybacks of notable Padres sluggers you're into, well have I got a group of cards to show you... 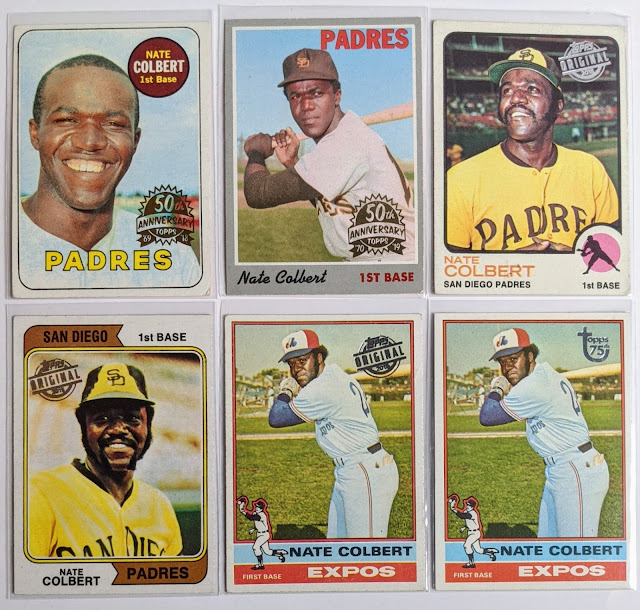 A half dozen boughten-back Nate Colbert cards. Not too far from a full career Topps run of buybacks, but his high-numbered '67 rookie stars card and high-numbered '72 (and corresponding In Action) make that an unlikely project to ever complete. 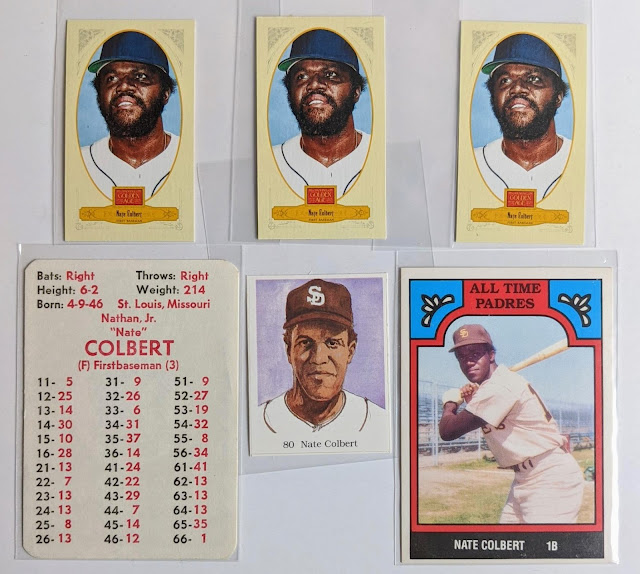 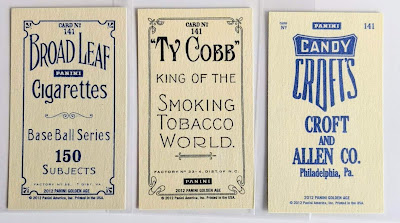 And some more Colberts for my semi-supercollection. Looks like I went on a little shopping spree with Nate in mind on 4/11/2020, as all 12 of these cards were bought on the same day. Some of these weren't good deals ($5+ each for the Ty Cobb back mini and the TCMA? Geez), but just wanted to basically snag anything on the site that I didn't already have.
I think I'd have a good chance of being #1 for Nate Colbert on TCDB. Oh yeah, I just looked it up and the top spot is only 31 cards. I think I could beat that, though then again a lot of my cards of him are proof cards that wouldn't be on the TCDB checklist. But yeah, I should enter in my PC one of these days.
UPDATE: Ok, I did. 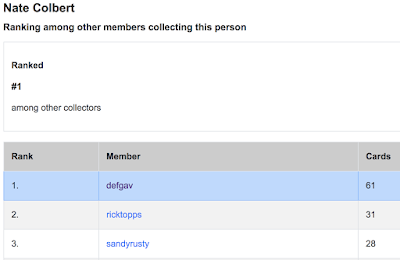 Woo! #1 by a wide margin. Most of the above buybacks plus the APBA "card" aren't listed, so my actual number would be even greater if those were added in. 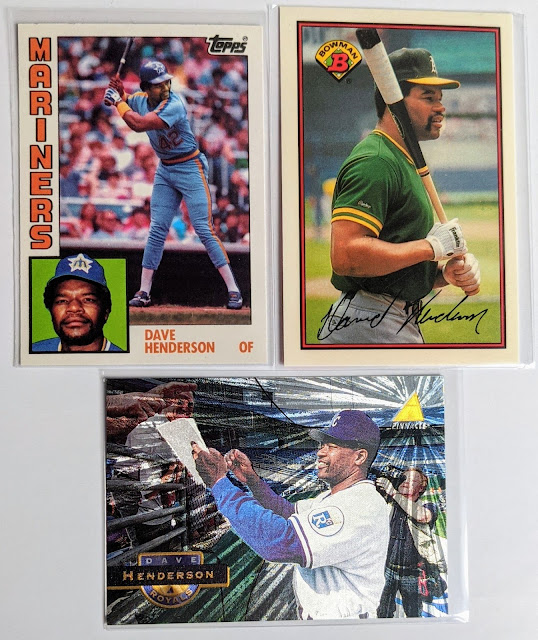 Dave Henderson is a PC I really enjoy adding to, but he's a relatively recent addition to my crew, so doubt I'd rank too highly on TCDB ("DaClyde" is first with 248 cards, followed by "bronnerea" with 175).. I still need most of his junky base cards (attn: trader buds). A pair of tiffany cards are among the parallels I grabbed this time around. I don't regard 1989 Bowman very highly.. but 1989 Bowman Tiffany? For whatever reason, I love it! Being glossy and printed on high quality cardstock somehow excuses it for the audacity of being oversized and not printing the player's name on the front. The weird by-team stats breakdown thing is still on the back, but at least it's easier to read on bright stock. lol 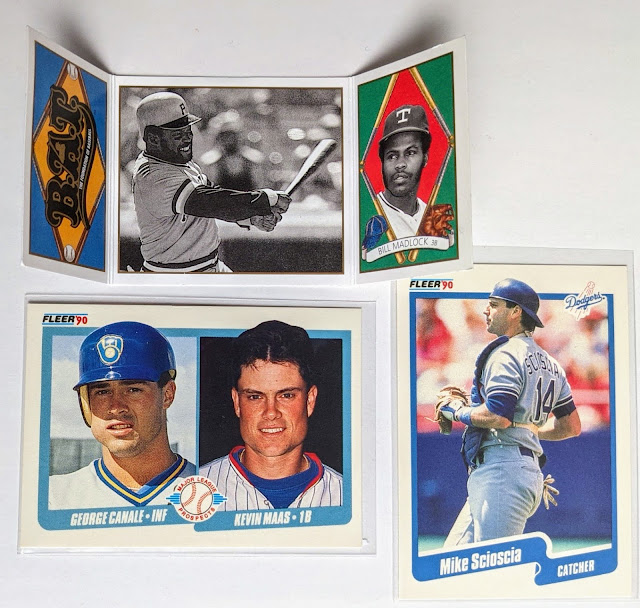 COMC damaged the Bill Madlock foldy, so I went ahead and folded it as intended by the design. I got it specifically because it was the only card of Mad Dog pictured on the Texas Rangers I didn't have. I might have a shot at the top 10 on TCDB for Madlock, but doubt I'd be too near the top ("bronnerea" repeats as king here with 154).
The Maas and Scioscia cards are imported from the north. 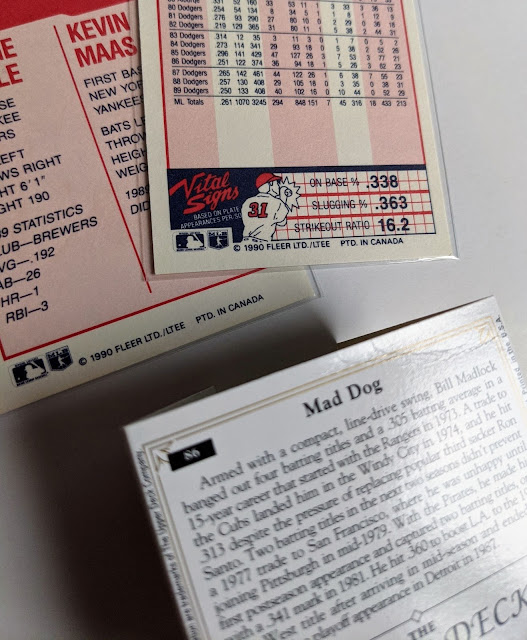 Just wanted to find a couple PC guys cheap as an excuse to add Canadian 1990 Fleer cards to my collection. ("Ptd. in Canada" on the bottom.) Feels like that's some mythic set that I hear about a lot but had never actually seen in-hand before.
Also in the photo, a look at the damage on the Madlock. It was in a long top loader, but it had been cranked pretty hard somehow in packaging and managed to damage the card within it. At least it only cost me $1 so I didn't make a stink about it. But yeah, not cool, COMC. 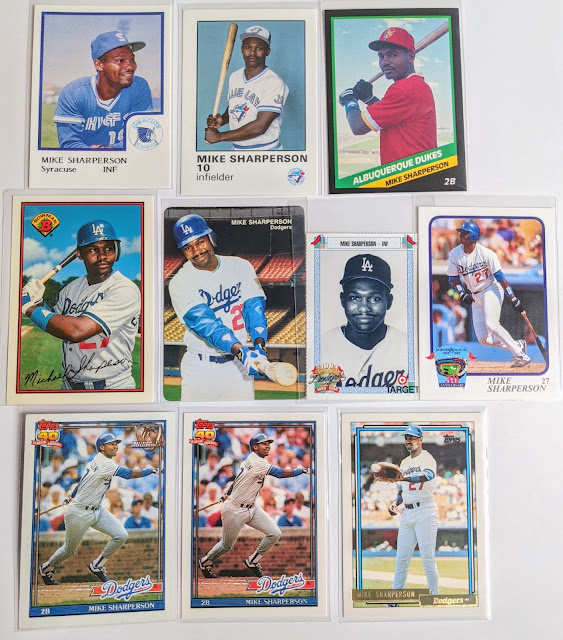 Mike Sharperson might be a really random player for me to collect, but I decided to build up a collection of his cards after remembering liking him back in my early days as a baseball fan and card collector circa '90-92 which really happened to be his only good seasons. Besides those 3 years, he was mostly on the roster for depth, spending the majority of his time in AAA with occasional promotions to the big league club. He was on the verge of making his Padre debut in 1996 spelling a hurt Ken Caminiti, but was fatally injured in a car wreck on the way to the airport.
TCDB lists 104 total cards with the top collector being "bronnerea" again with 70. It'll be a while till I'm anywhere near that, but enjoy picking up some oddities like these. (The '89 Bowman and middle '91 Topps are tiffany.) Still need most of his junky cards, but I'd rather get those in trade then have to buy them. 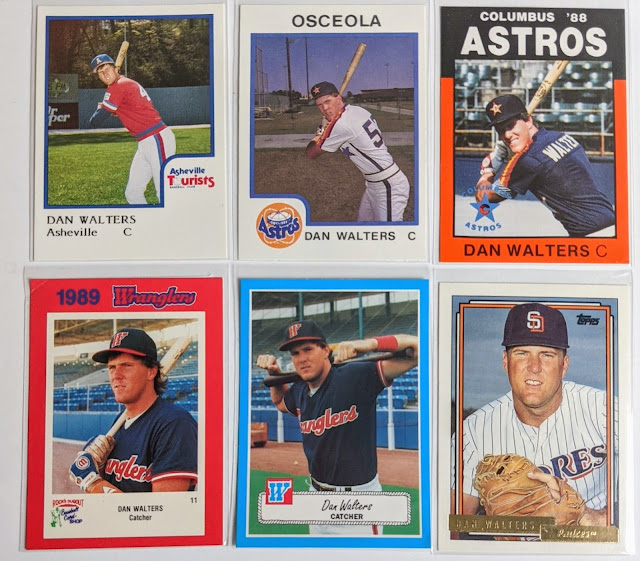 I also scored a few needs for my Dan Walters PC, mostly minor league issues. The most expensive of these was the 1989/red one ($3.20), which sadly is another victim of COMC's employee damaging the card during packaging. You can see the top left corner got jacked up. And by context of the package contents, it was clearly damaged during packaging, not already damaged before the fact nor damaged in transit. Boo. I know those guys are rushing to catch up on their backlog, but wish they'd be more careful with the cards.
Dan Walters is yet another player featured in this post whose life was cut short. I don't consciously decide to collect guys who die before reaching old age, but perhaps on some level my heart goes out to them. Collecting their cards might be like my way of paying tribute.. and/or a reminder that life is precious and I should take the time to appreciate every day I wake up in good health.
Walters has just 42 cards listed on TCDB, with ol' "bronnerea" ranked the #1 collector with 26 of them. That guy must either have a huge collection, or we just happen to share a few favorite retired players. I might be able to challenge him on this one, as I think I've got around 20-30 Dan Walters cards.
UPDATE: I've got 24 cards. So close! Good for 2nd; in striking distance of 1st.
One thing that bugs me about TCDB is the arbitrary way cards are assigned to players. 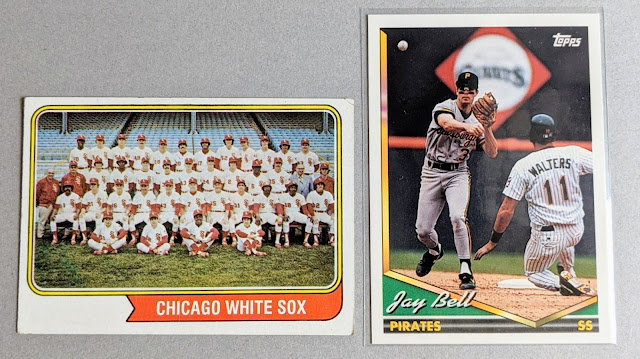 Per TCDB's checklist, the card on the left is considered a Dick Allen card, yet the card on the right isn't considered a Dan Walters card. I suppose "My collection, my rules" doesn't apply when you're using somebody else's website (and the site's many users have plenty of room to edit as they see fit).
Last guy for today is Marcus Giles... 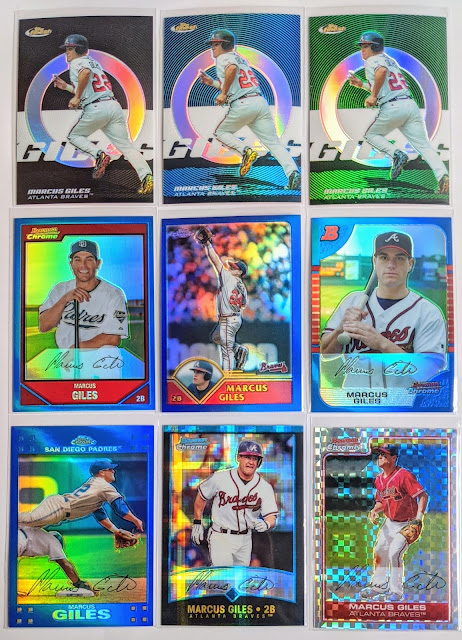 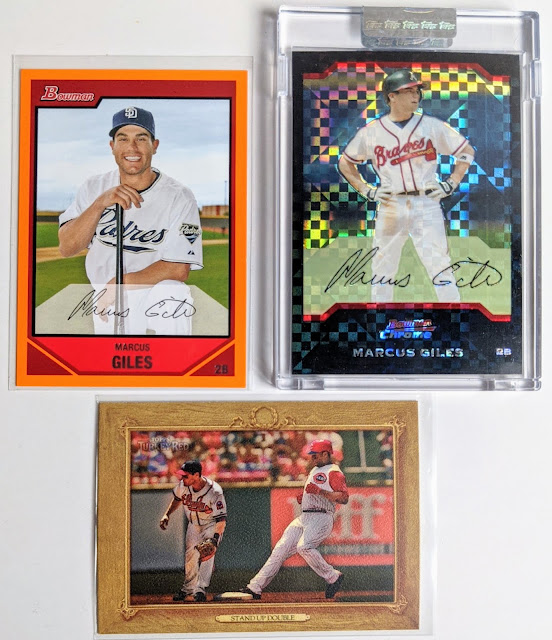 As I've mentioned plenty of times on the blog, I grew up with Marcus, in the same grade as him at the same school from elementary through community college. So it's cool to collect a former classmate of mine. Like, check it out, a guy in my high school P.E. class is sharing a card with Ken Griffey Jr!-- How cool is that? Plus it's a good excuse for me to add some fun parallels from years that I wasn't actively collecting. And despite three strong seasons in his career, he was never a huge star, so his cards usually don't run me too much cash.

TCDB user "bravefan1" has a commanding lead for the top spot with 143 Marcus Giles cards, but I could probably challenge that total if I added my PC to the site. Too lazy to do that right now-- beautiful Memorial Day weekend over here-- but remind me another day. lol