I finally got my big COMC shipment in: a total of 189 cards for $381.60 amassed from 8/21/2019 thru 11/7/2020 when I requested shipment. Pre-covid, that would have been ample time to receive the cards by Christmas, but the current hobby boom caught COMC unprepared and they've struggled to catch up ever since. So now after nearly half a year waiting for them to arrive, I've finally got my cards in-hand.

As an aside, for my job I physically mail out several hundred packages of data archives every month. It wasn't easy, but even at the height of lockdown, I never fell behind schedule. I stepped up my game and found a way to make it work despite the additional challenges. So I don't have a lot of sympathy for COMC at this point. I haven't purchased any cards on the site since this shipment, and don't plan to until/if they get their shit together.

I figure there's a few posts-worth of cards to feature on the blog from this lot, and I'll start with the Christmas Cards. Sometimes I think I should cool off on hunting for cards serial-numbered 12/25. With the crazy number of parallels being put out these days, the novelty has kinda worn off. But dang it, I still love them, and once in a while I would get bored and bumble around the site looking for them, either cheap (usually prospects who never made it) or less-cheap (guys I collect or otherwise eye-catching cards). 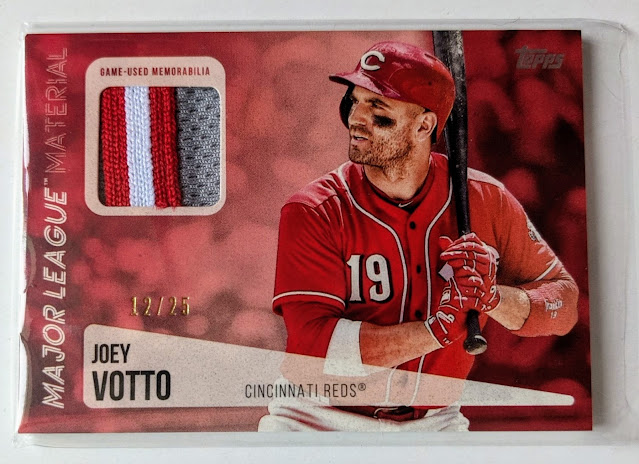 Here's one of the latter. Dropped a Hamilton on this Joey Votto with a neat piece of jersey. I believe this was one that I originally saw pop up via COMC on eBay, then hopped over to the site to purchase it for a little cheaper. Ended up with 6 Vottos in the order. His numbers may be slipping as he gets older, but still a cool dude and fun to build a little PC of.

Unfortunately, you can't just search for "12/25" on COMC and get a bunch of Christmas Card results. I pretty much have to find a line of parallels that are /25 and then check them for any that are 12th in the production run. I figured out Bowman Chrome typically has orange refractors each year with 25 copies in the run, and hey, I like refractors and the color orange, so I spent some time searching the site for them. 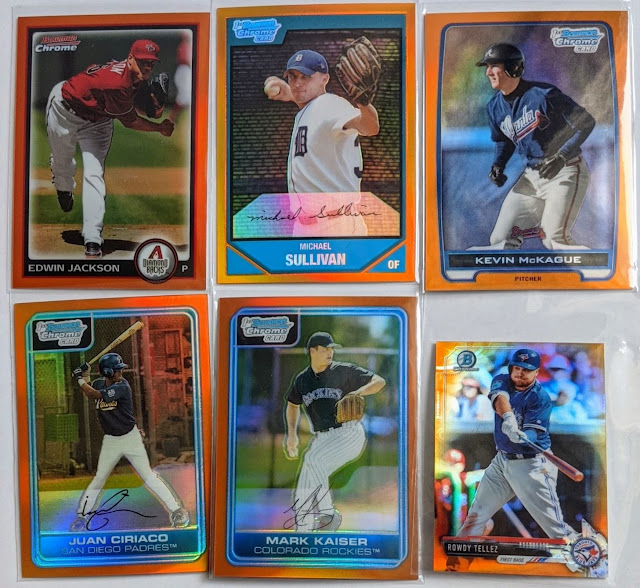 Edwin Jackson established the major league record for most teams played for (14), nearly as much as the rest of the guys in this post combined.
Michael Sullivan never made it out of A-ball.
Kevin McKague seems to be a West Point graduate who pitched 5 games in rookie ball and that's it.
Juan Ciriaco played nearly 400 games in Triple-A yet never got the call.
Mark (Marc) Kaiser also topped out at AAA.
Rowdy Tellez has had some success with the Blue Jays in recent years, though got sent down the other day to make room on the roster. Gotta root for guys with fun names. 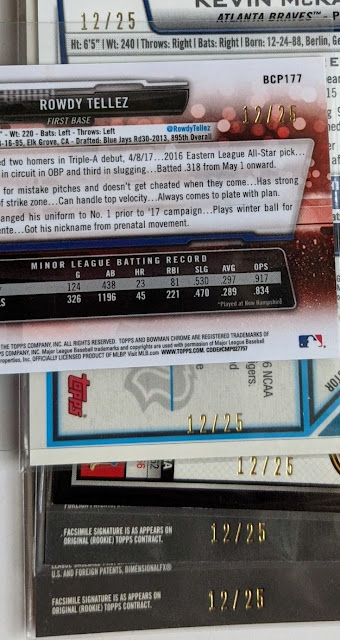 Numbering is on the backs with these, so here you are. Oh hey, just noticed Kevin McKague is a fellow Xmas Eve baby. That's twice the yuletide cheer with this card.
But wait, there's more... 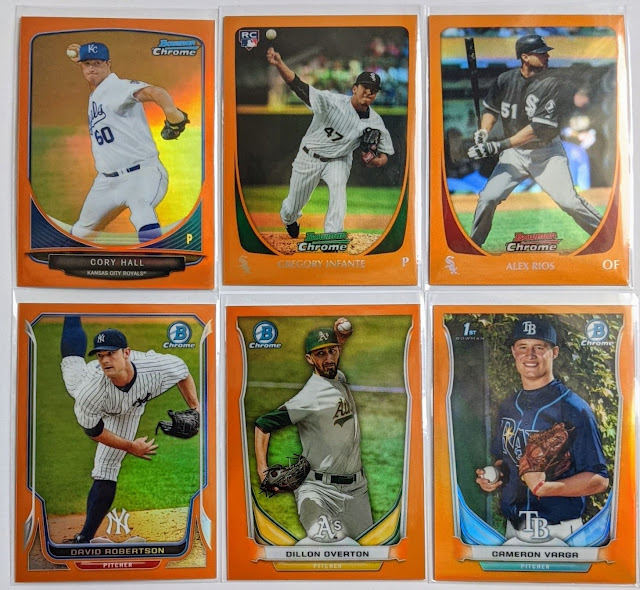 Cory Hall didn't make it out of A ball.
Gregory Infante had a cup of coffee with the White Sox in 2010, bounced around organizations in the minors for several years, then returned to the South Siders to become one of their best arms out of the pen in 2017.
Alex Rios had a sold 12-year career in the AL, getting All-Star nods in '06 and '07 with Toronto.
David Robertson also enjoyed a 12-year career, with his best season being 2011, putting up an impressive 1.08 ERA over 70 games with the Yankees.
Dillon Overton got into a few big league games in '16 and '17, including a single start for my Padres.
Cameron Varga never made it past A ball. 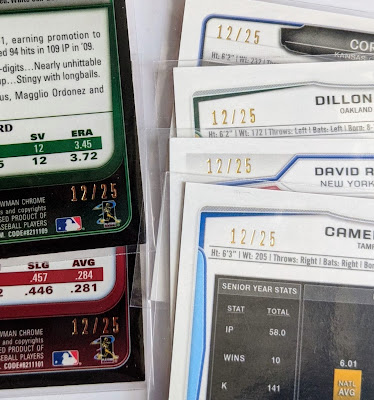 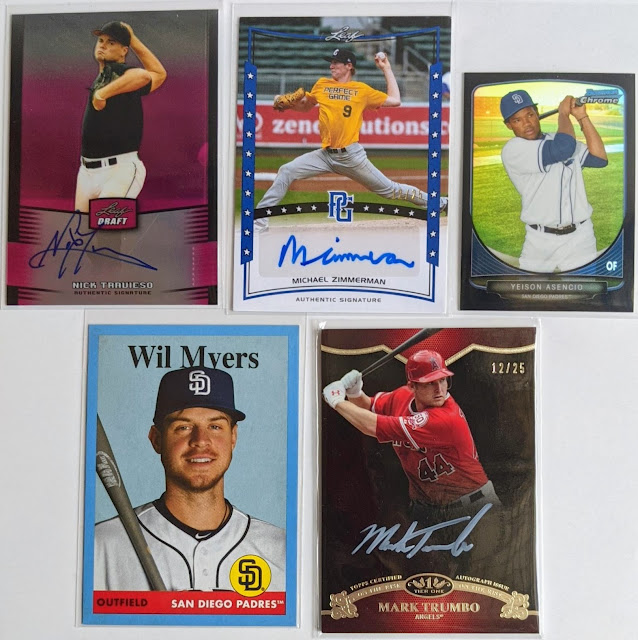 And here's the last of the baseball Christmas Cards from the order.
Nick Travieso made it as high as AA and was spotted pitching in the Puerto Rico Winter League last season.
Michael Zimmerman is another guy who didn't make it past A ball.
Yeison Asencio is a former Padres prospect I was really rooting for but he didn't pan out. I have a couple other parallels of this 2013 Bowman Chrome card including a gold refractor auto. He seems to still be active south of the border.
I always say I don't need more Wil Myers cards, but eh, caved to pick up this blue-bordered Archives card.
The Mark Trumbo auto is cool if you squint your eyes and pretend it's Mike Trout. He had a few good years and hit 218 taters, but seems to be finished now. 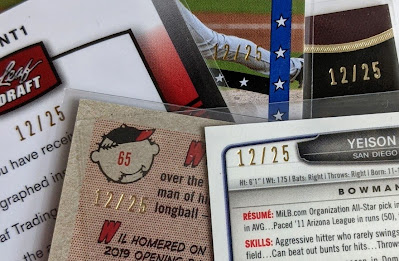 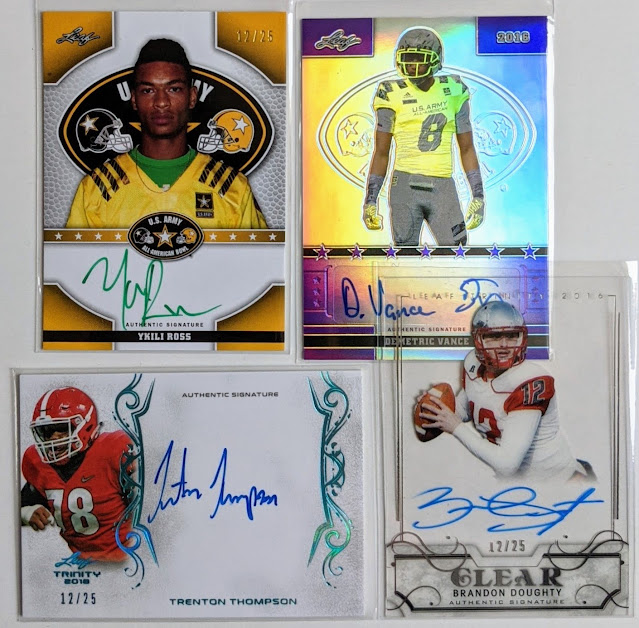 I also picked up 4 football cards with my favorite serial number. Always love green ink autos (Ykili Ross here), and the refractor looks cool, too (Demetric Vance). Trenton Thompson has played some in the CFL. Brandon Doughty was starting quarterback for Western Kentucky from 2013 to 2015. I've got a grampa-in-law who taught there for many years, so that's kinda cool. 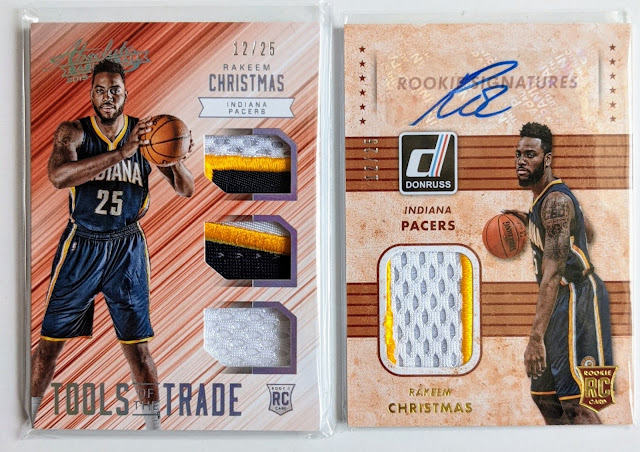 We close out the post with a pair of Rakeem Christmas Christmas Cards. Love doubling up the Christmas like this. He didn't stick in the NBA very long, but is still active overseas. Fun fact: Rakeem made Michael Jordan a grandfather in 2019, siring a son with Jasmine Jordan, Michael's daughter. That kid's got some good basketball-playing genes!

So there are the 12/25 cards from my big COMCOVID order. Still plenty of more fun stuff to show off in upcoming posts.