Non-sport pickups plus Wallet Card and Ruby at the coast

More cards from my recent big order, this time some stuff outside of sports.. well, the big four sports, anyways. I found out Goodwin Champions is a good source for cheap on-card autographs. First off is a trio of TV dudes.

Craig Kilborn was entertaining back in his ESPN days, and I enjoyed him as the first host of The Daily Show, but it was his tenure as hosting the Late Late Show on CBS that really endeared him to me. That was a fun show. But he left to try his hand at becoming a big hollywood actor and was never heard from again. Happy to snatch this auto for just $1.53.
Another show I like is the sitcom Fresh off the Boat, based on the memoir of Eddie Huang. Figured I'd pick up an auto of his, even if it appears he attended the Wil Myers school of lazy wave signatures.
Aries Spears was pretty funny on MADtv back in the day. I haven't heard much of him since, but hey, I pulled the trigger on this inexpensive auto. 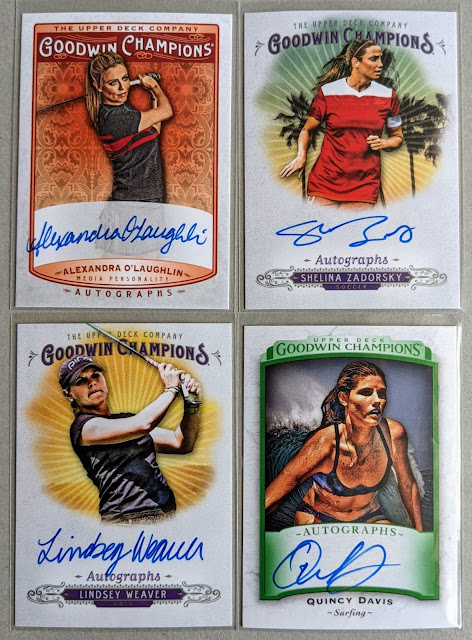 Here are four Goodwin Champions who happen to be attractive women, each card scored for just a buck-something. Heck yes! I wasn't familiar with any of these people, but jumped at adding a few more on-card autos to this part of my card collection for cheap.
Alexandra O'Laughlin is a golf and travel correspondent with the Golf Channel and NBC.
Shelina Zadorsky is a soccer player who plays in the English FA Women's Super League, as well as on the Canada women's national soccer team.
Lindsey Weaver is a golfer who's had some success on the LPGA Tour.
Quincy Davis is a professional surfer from Montauk, New York. 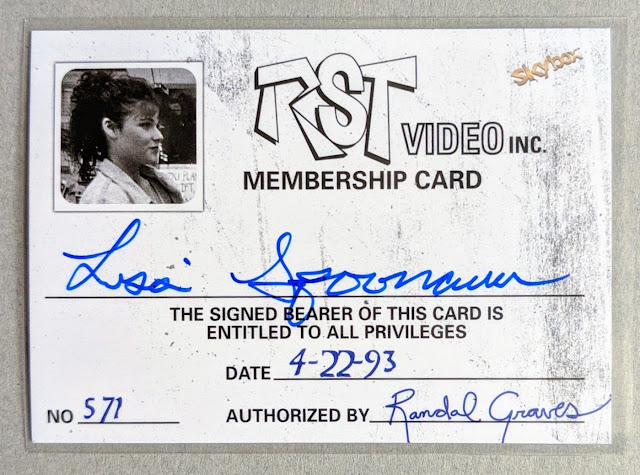 Another pretty lady's autograph, though a sad one as Lisa Spoonauer passed away the same year these 2017 Skybox Clerks cards came out. Great flick. Tempted to go after more cards from this set, but for now, this one will do. 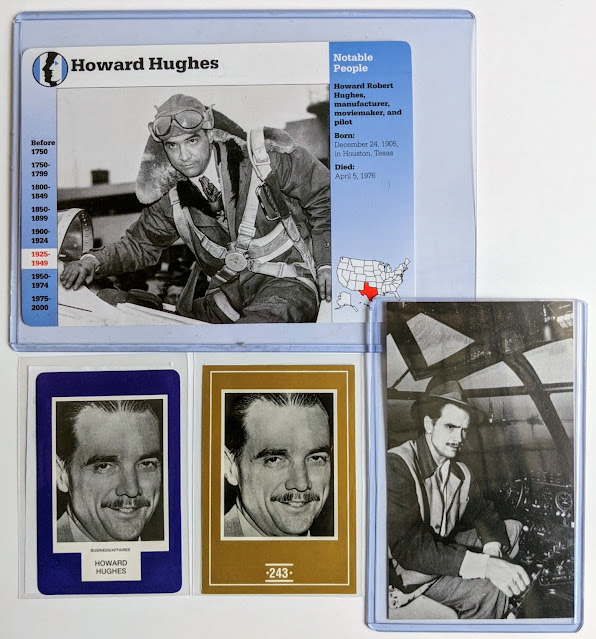 I also picked up some additions to my Howard Hughes PC. 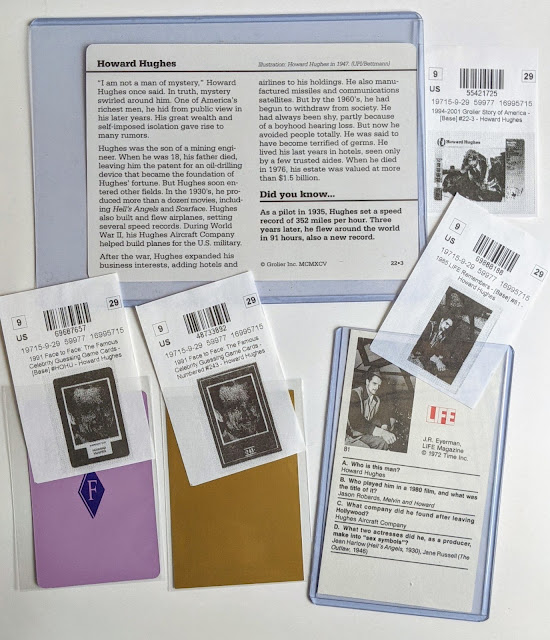 I should mention that COMC started including a little barcode slip thing with every card. I know they used to do that sometimes in the past, like with encased cards, but now I think every single card in the shipment included one. Makes sense for inventory reasons, I suppose, but kind of a pain to have to remove the receipt from every sleeve. Though sometimes, like with obscure oddballs such as these, I think I'll go ahead and leave the slip with them to help with identification down the line. 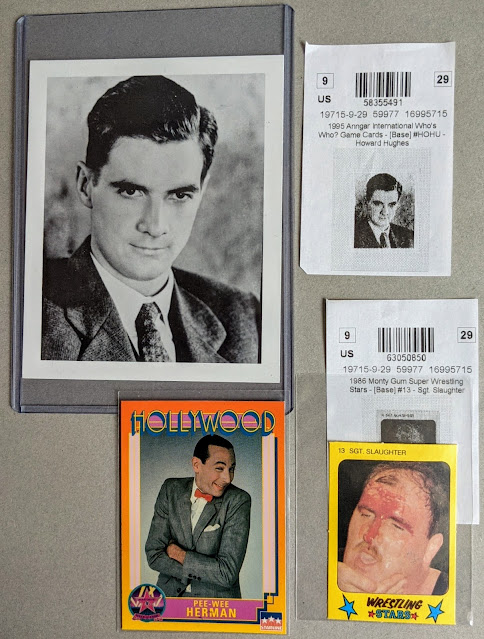 Another oversized Hughes, a Pee-Wee, and a bizarre bloodied Sgt. Slaughter. 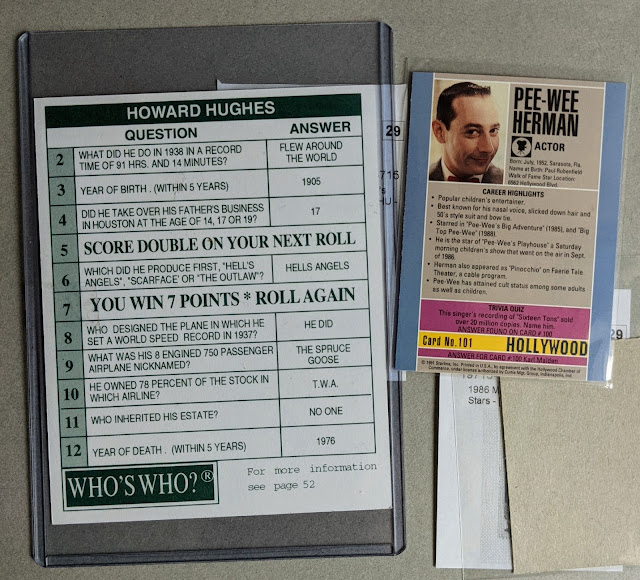 Not to brag, but I scored very well on the Howard Hughes quiz.. but then again I did just research him last year for the 9-card custom set I made.

After completing the master set of 1988 Topps Pee-Wee's Playhouse cards (that I have been meaning to post about one of these days), I figured I'd try to pick up the other cards of him out there.

Sgt. Slaughter is a dude I collect because of his GI Joe connection (I was a huge GI Joe fan as a kid).

Alright, that's all from that shipment for now. Still lots of baseball left from it for future posts. 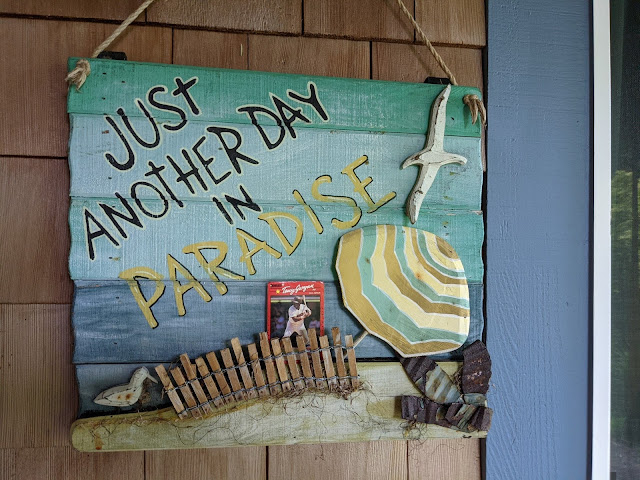 After missing last year due to the pandemic, my wife and I and her immediate family returned to the house at the Oregon coast we've rented for a weekend each spring for several years now. It's often the most action my wallet card gets each year. 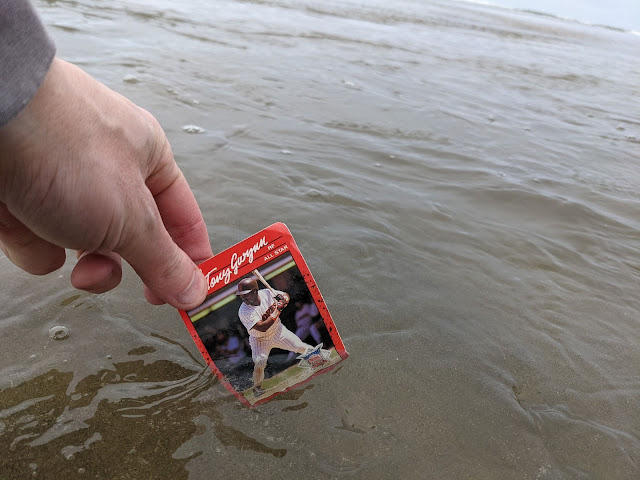 I always like to dip in my wallet card when there's a body of water around, so had to snap this pic in the ocean. 90D Gwynn here, my wallet card for 2021, will possibly have the rare distinction of touching both the Pacific and Atlantic, as we'll be traveling for a wedding in New England later this year. 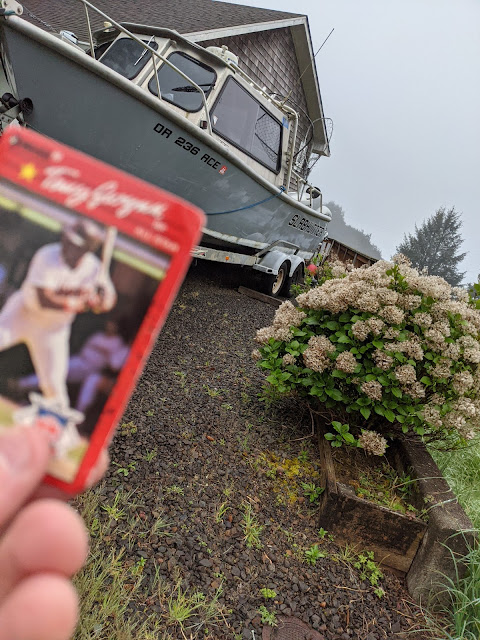 While walking Ruby around the neighborhood, I came across this boat named "Slabhunter" and had to take a wallet card photo. Seems it's a fishing term, not a reference to searching for graded cards, but still. haha 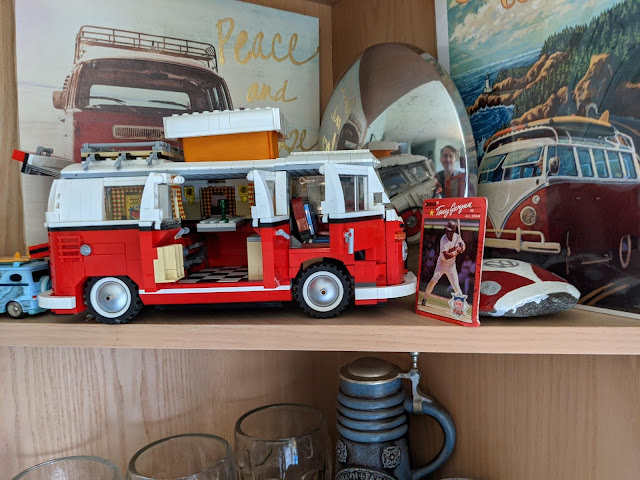 The house has seen some changes/improvements since last time we stayed there. One new thing that caught my eye was this cool Lego VW bus with opening doors n' stuff. All 6 of us humans in our group had been fully vaccinated, so it was nice to be able to hang out together like normal again and not worry about masks unless heading into town. Really the biggest difference with the whole trip is it was the first time staying at the house without Annie, our beloved rottie-mix who passed in late 2019. She was an awesome dog and it was kind of weird and sad without her there.
Instead we had to deal with this jerk.. 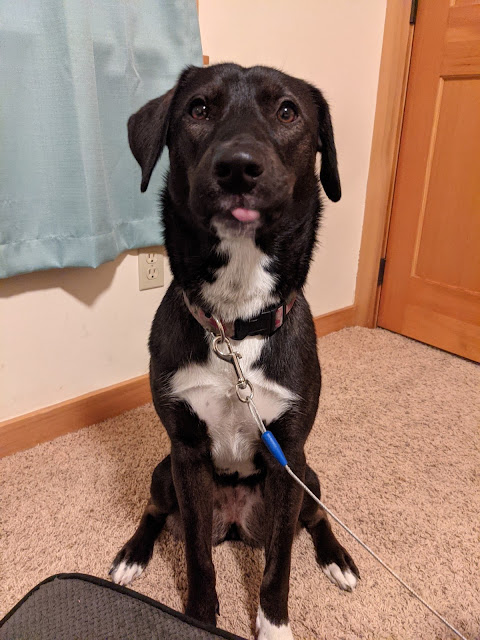 Ruby, on the verge of turning one year old, was a dang terror all weekend, thanks I suppose to being overstimulated with special friends who spoil her (my in-laws) and a new place to explore. She pissed all over the house (and pooped in it once), stole a big cut of pork tenderloin off the counter during dinner, whined a lot at bedtime, and just generally forgot all her behavioral training. (She was back to being better once we came home.) But damn it, she's a cutie so it's easier for her to get away with it. She sure did have a blast, especially down on the beach... 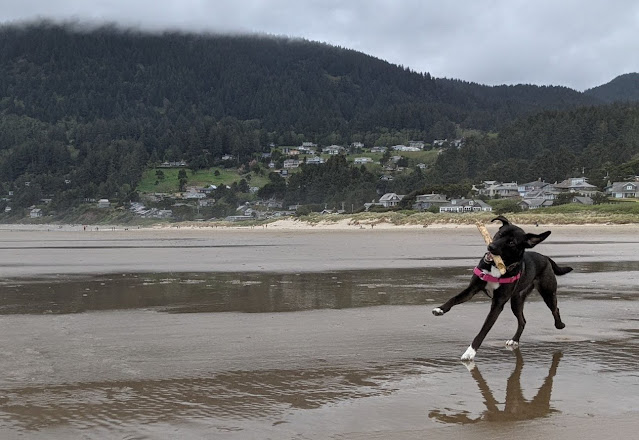 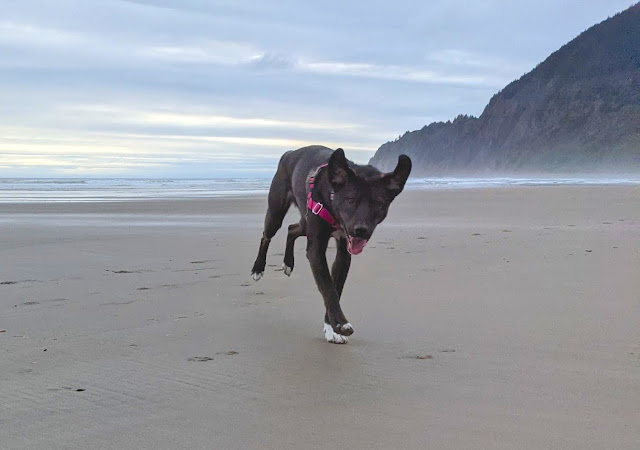 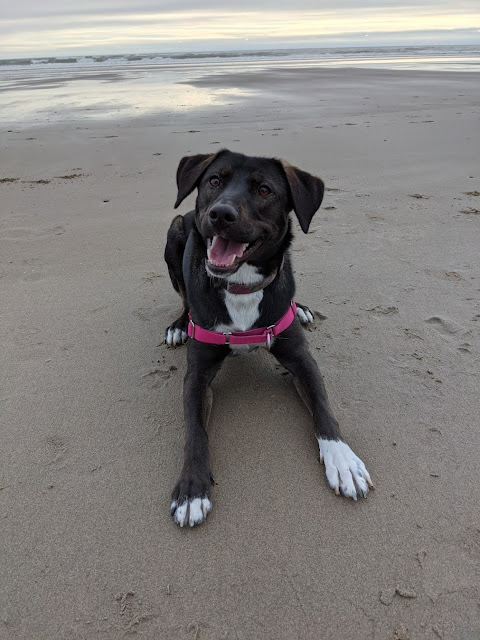 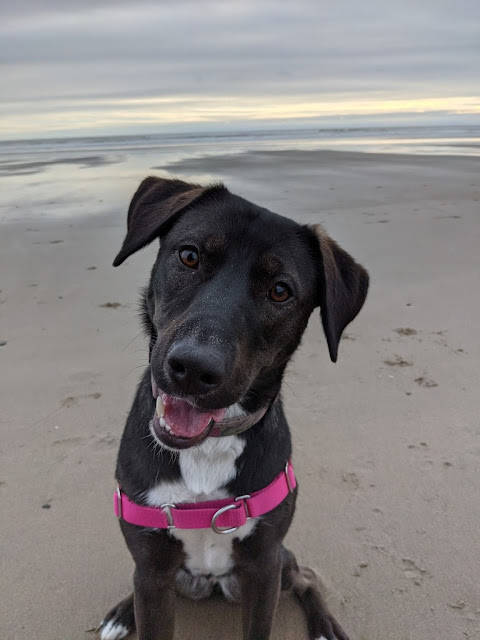