Time for more from my recent COMC package. 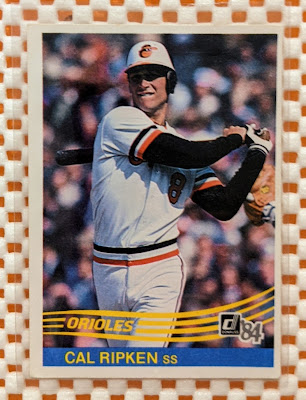 Joy of a completed set: Ripken closes the book on 1984 Donruss for me. (I just put together a simple base set; no variations.) I'll need to remember to take a moment to better enjoy the set one of these days, maybe even get a post out of revisiting it, but in the interest of time, for now I'm tipping my cap to the Iron Man and filing him away. Chagrined I wasn't able to coax any trades for it atop my Double Dozen wantlist, I went with the cheapest specimen available, hence being less than mint. Well hey, my 84D Mattingly has a little crease, so it's not like I'm sending in my set to PSA, I just appreciate knowing I've got the complete set. I've previously completed Donruss sets for 1985 and 1990, eventually hoping to finish a run from 1981 through '93 or so. But '84 and '85 are my favorites (and 90D due to sentimentality), so I'm glad I've got those in my collection now. 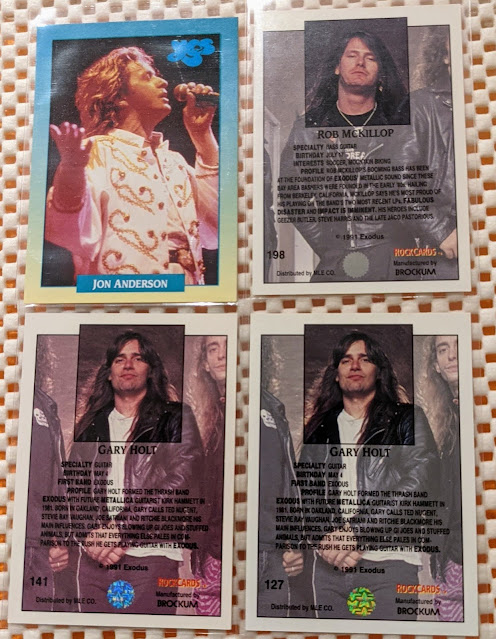 A while back, Padrographs Rod gave me a near-complete set of 1991 Brockum RockCards. I finally picked up the one missing base card, plus 3 variations to extra-complete the set. I won't go as far as to call it a "master set" because there's also stuff like hologram inserts and promo cards which I won't be hunting down (I do have the Axl Rose promo, though; he's not actually in the base set). But yeah, the rock set is a nice complement to my 1991 MusiCards set and the whole "music" section of my card collection I've been beefing up over the past three years or so.
I can't say I'm a huge Yes fan, though that album with "Owner of a Lonely Heart" was the first compact disc I ever bought (well, I also bought Pyromania at the same time). Listened to that album a ton, but besides that I only know like a couple other Yes songs.
I'm not too educated on the metal band Exodus, and apparently neither is Brockum, as they mixed up a couple members in their back photos. I still don't really know which guy is which, but I just know how to tell the variations apart because cards #127, 141, and 198 each have "black shirt in back photo" and "white shirt in back photo" variations. 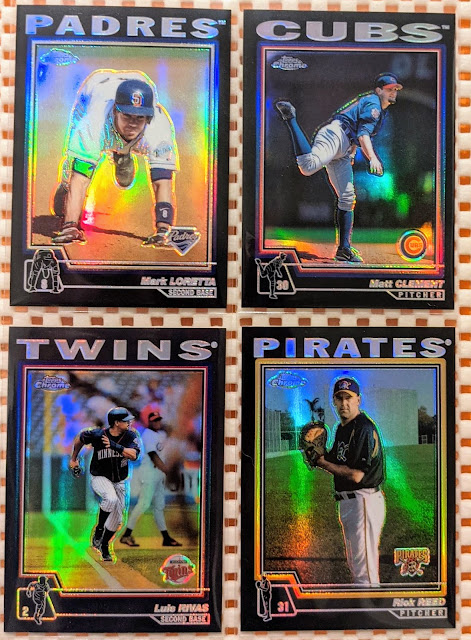 I may never finish my ambitious project of a black refractor parallel set of 2004 Chrome, but I still like plucking cards here and there when I can find them for a decent price. This quartet of commons includes a couple guys I remember rooting for when they were with San Diego. 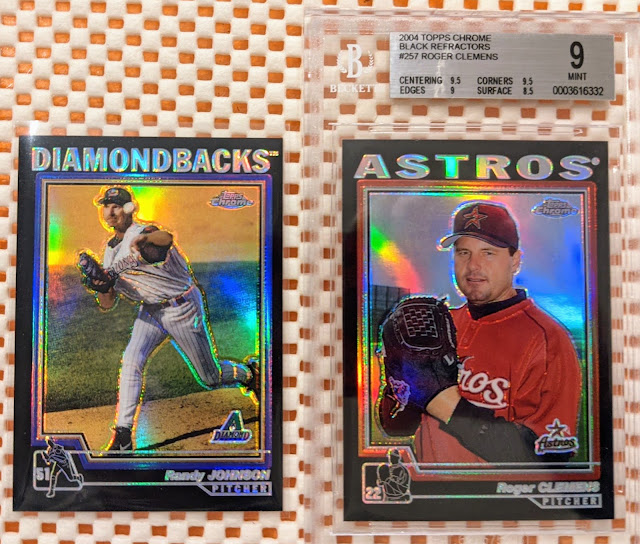 And check out this pair of legendary hurlers. Full disclosure, the Clemens was a recent eBay pickup, not COMC, but I've been meaning to feature it on the blog and makes sense to toss it in here. I've hit 60% complete with my goal now, with 194 cards remaining (including some toughies like Yadi [RC], Ichiro, and Pujols). It's one of those "welp, if I live long enough, perhaps I'll be able to complete this before I die" projects. But hey, I love the look of these cards and working on the set gives me a reason to keep looking at them. 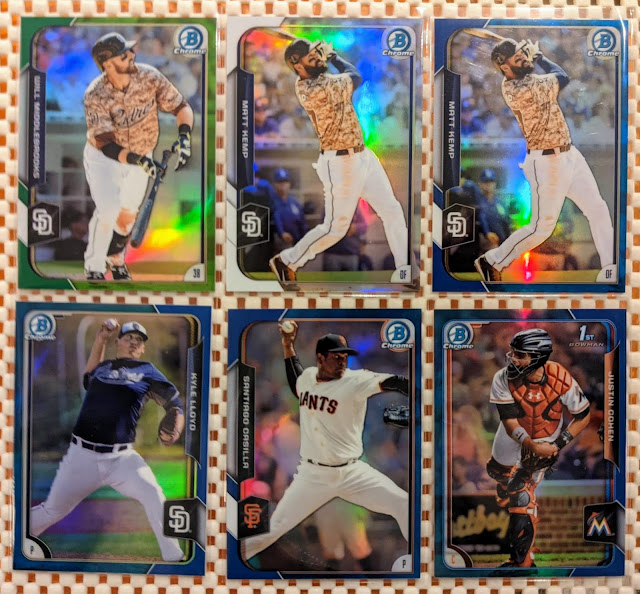 To a lesser extent, I really like looking at 2015 Bowman Chrome refractors, and sometimes I'll check who's available down in the "sort by lowest price first" inventory and try to add some color to my order. Sorry for the blurry photo.. the green one is Will Middlebrooks. 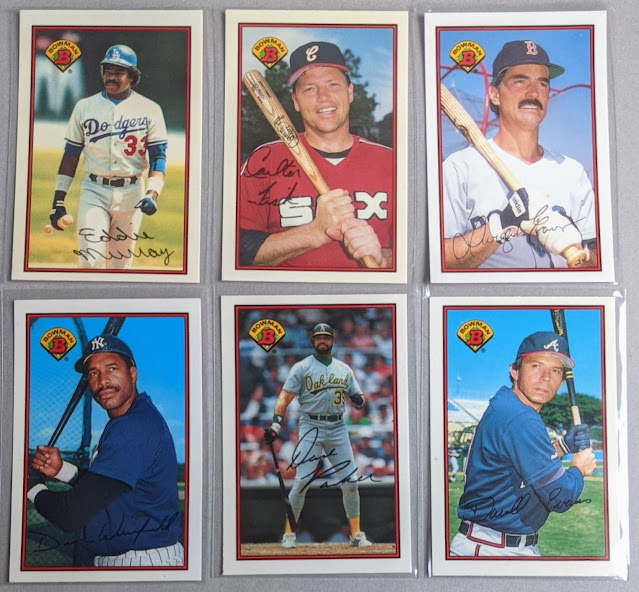 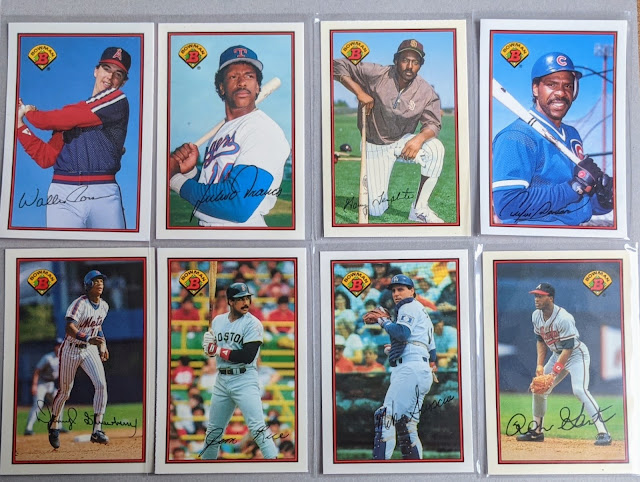 You'll have to take my word for it that these babies are glossy. Love adding tiffany cards of guys I collect. Again, sorting by cheapest and seeing what catches my eye. 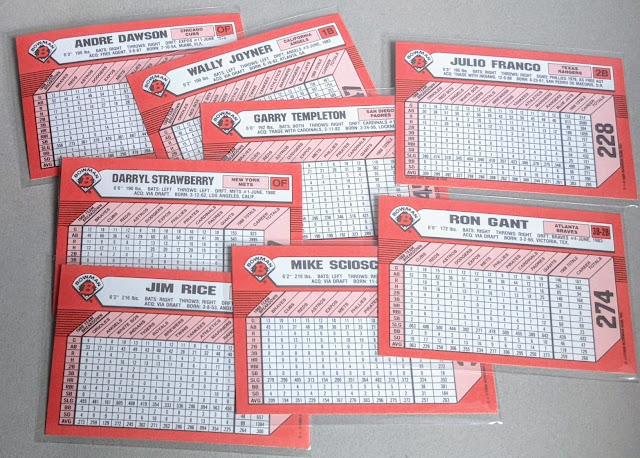 Looking at these after standard 1989 Bowman backs has gotta feel like you've had successful cataract surgery. I wish this could have been the default paper stock for Topps back then, though I'm sure the speckled, dark crap they used was cheaper, especially considering the huge print runs of the time. This tiffany factory set was limited to 6000 copies. 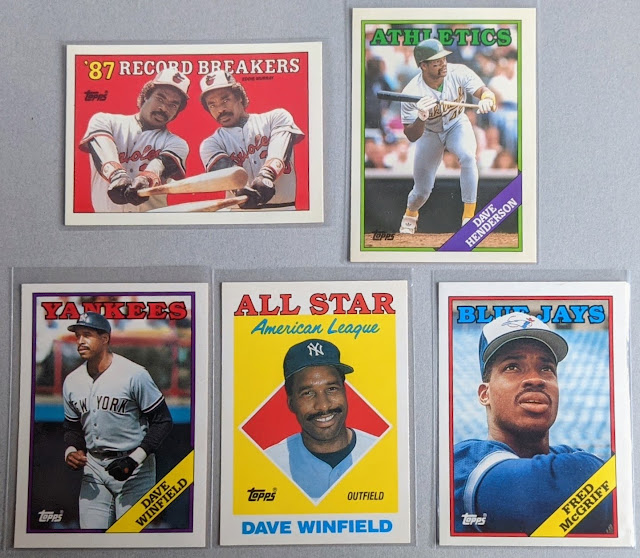 Also in my search for non-junk junk, I picked up a few 1988 Topps tiffanies. 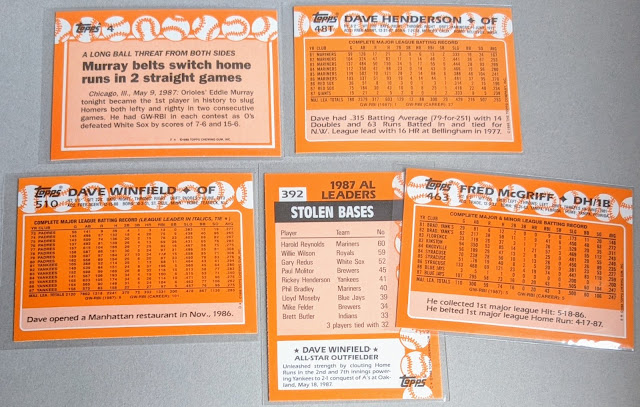 Small black text on a dark orange background still isn't the easiest to read, but it's an improvement over that year's flagship. (Worst Topps flagship backs ever?) Ok, Hendu is from the Traded set, so the difference in quality isn't as dramatic. 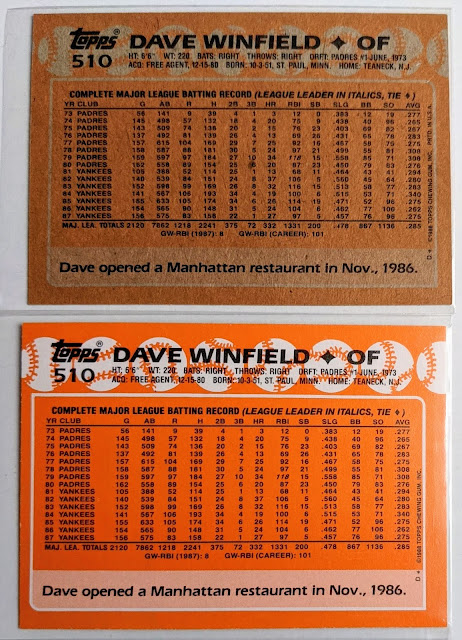 A curious search for Winfield's restaurant didn't turn up much, but apparently it was called the U.S.A. Border Cafe, located at Broadway and 100th Street, serving Southwestern fare from 6 PM to midnight daily.

That'll do it for today. I think that covers everything in this COMC shipment besides a pair of (non-vintage) Mantles that completed a project for a future post. Thanks for stopping by.