Always a thrill for me when I get an autograph of a brand new Gavin for my collection. Remarkably, I was recently able to add 3 such "autoGavs" in the span of about a week thanks to a couple eBay wins and a TTM success. 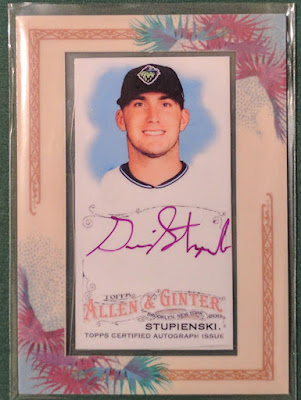 Check out Diamondback prospect Gavin Stupienski in the style of A&G! I even went the extra mile by grabbing a framed mini off COMC for a buck so I could repurpose the frame.

Neat story behind this TTM request, as fellow blogger Matt Stupienski is Gavin's cousin, and Matt kindly helped facilitate the success. If you've seen his blog Bubba's Bangin' Batch of Baseball Bits, you know Matt is a big Ginter nut, so that inspired me to go this route with my idea for the card.

At 66 days, it's now my longest-awaited successful return, but it wasn't because Gavin was lazy about it or anything. I originally sent it to Matt in our trade before Thanksgiving, with our thought being that the two cousins would possibly cross paths over the holidays, but it didn't end up shaking out that way, so eventually Matt mailed the card to Gavin, and then Gavin mailed it back. 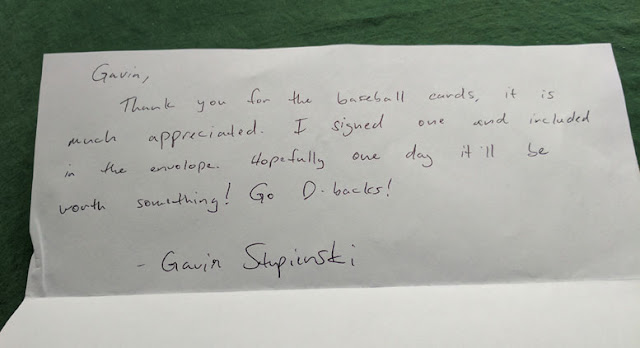 Big thanks for your time and generosity, Gavin! I'll be rooting for you to kick ass in 2017 and hopefully make your way up to Arizona before long!

And big thanks to Matt for the great assist!

Gavin Hinchliffe is a high school pitcher who's verbally committed to Virginia Tech, assuming he isn't drafted in a good position this coming June. Best of luck to you, Mr. Hinchliffe!
I got this Leaf Perfect Game stickergraph #'d /50 for a few bucks off eBay.

This might look like a standard card, but it's actually 6"x 8", making it my first oversized Gavin. Grant Gavin had a terrific start to his pro career last year in Rookie League and looks to build on that in 2017. He doesn't seem to have any actual cards out yet, so I was excited when I saw this autographed team-issued stadium-giveaway pop up on eBay for a few bucks.

So those were three brand new Gavin autographs for my collection. But as long as I'm posting about Gavin autos, I'm going to go ahead and post some new Gavin Lux cards I've picked up lately. 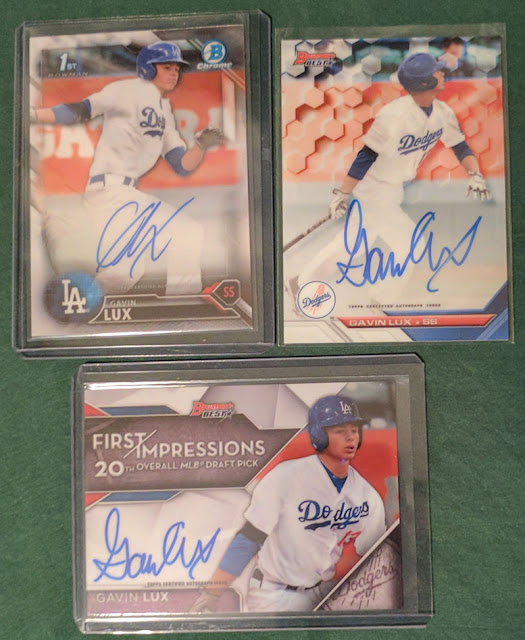 Got the Gavin Lux base autos from 2016 Bowman Draft and Bowman's Best, plus a /50 insert from Best. I was able to land "full name" autos for the Best cards, though all the Bowman Draft autos apparently feature his abbreviated signature. While I've bid on a few parallels, they seem just a bit out of my desired price range, so I'll have to be content with these base autos for now, my first cards of him in a Dodgers uniform.

I did pony up for one rare Lux card, though... 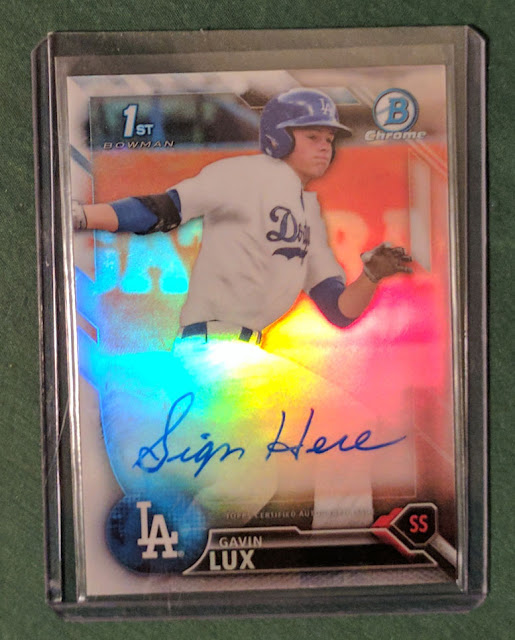 Remember a few weeks ago I did that post on "Sign Here" cards? Well, I ended up winning the auction for that Gavin Lux card. Even though it doesn't actually feature his signature, it's a unique addition to highlight my Lux PC.

Also just picked up a Gavin Cecchini USA auto from back when he was just a wee lad.


And so there you have a few nice additions to my Greatest Gavins minicollection.
See you next time!
Posted by defgav at 3:58 PM