Cards, photos, and some whining

I sort of haven't really posted here in a month, seeing as the dumb April Fools post and most of the Sunlight vs. Cards post were drafted earlier in the year, before my previous post which was back on March 6th. Back then we were still in the thick of the MLB lockout, so a lot has happened since!

I've started a new post a few times since then, but with the exception of the latest 1991 MusiCards Blog post, they've devolved into long ramblings whenever I try to type up a little "How I've been doing lately" section and then I'm not happy with it just scrap it and eventually start over a few days later. But the bottom line is I've "stepped back" a bit, specifically from Twitter. Thanks to the social media hiatus, I'm more out-of-the-loop than I'm used to being, but my anxiety levels are much more manageable.

Anyways, here are a few recent pickups of mine. 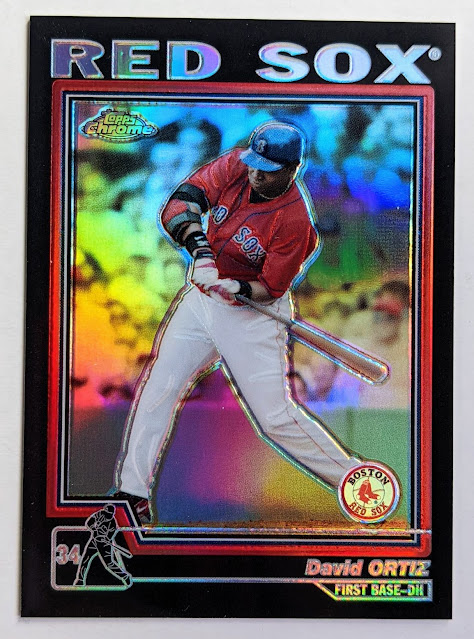 I've got an eBay search set for a few "big cards" I still need for my 2004 Chrome black parallel set that keeps crawling along. Big Papi is a good one to secure, and of course '04 was a big season for him and the Sox. 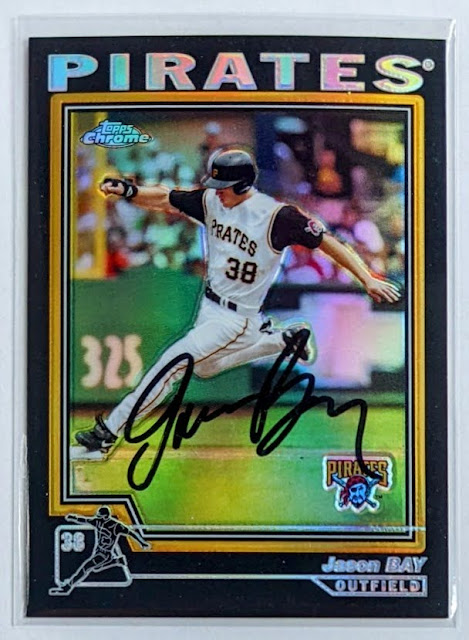 And then, for much cheaper, I bought this Jason Bay card I needed. And it's signed, to boot. I'm in no way trying for a signed complete set of these, but like having some signatures sprinkled in. 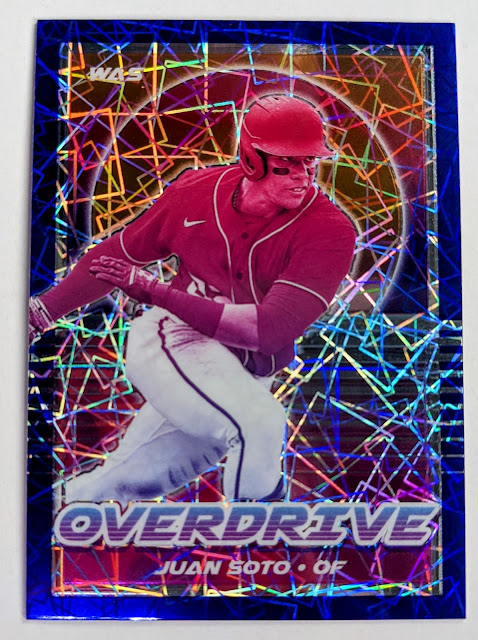 I got the base version of this Juan Soto Overdrive insert from Kerry recently and I liked it so much, I went and sniffed out a good deal on a shiny parallel, snagging this "blue velocity" for less than a couple bucks shipped. 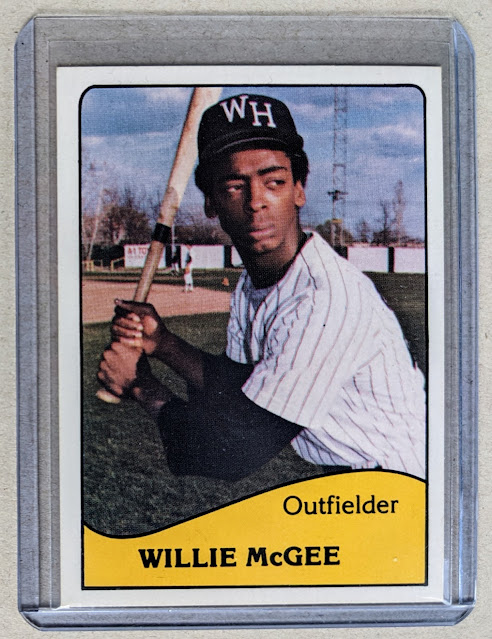 Another blogger-inspired pick-up, Bo showed off this minor league Willie McGee on his blog a couple months back. I hadn't realized McGee had a card from his days as a Yankee farmhand, and thought it was cool enough to keep an eye out and eventually landed myself one. 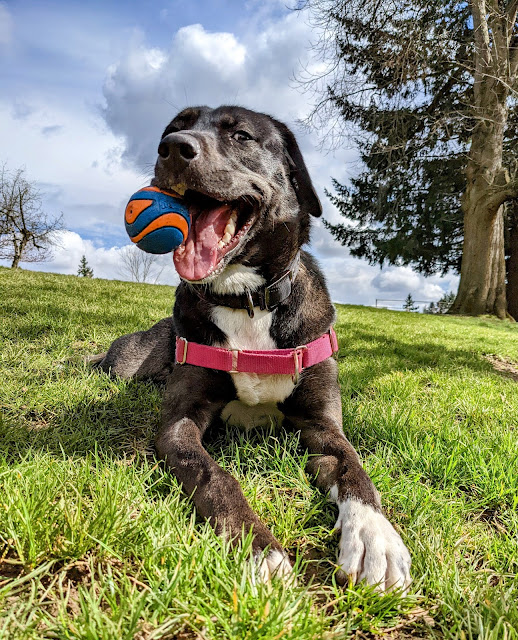 Nice shot of Ruby displaying the advanced move of panting while also still chewing on her ball. 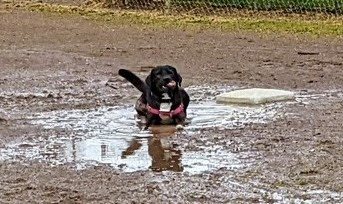 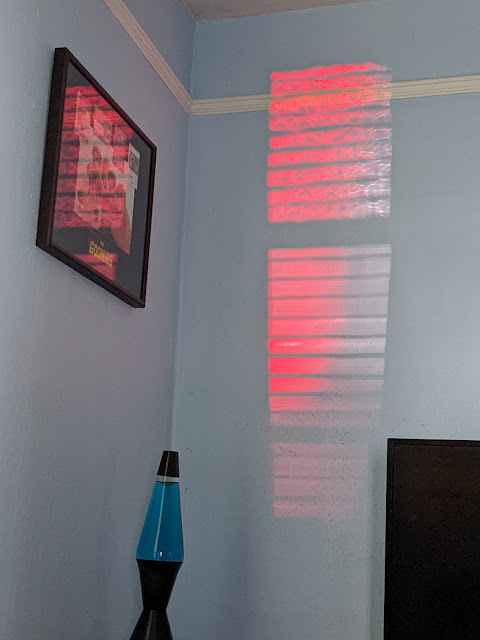 One day the sun bounced off the brake light of a car parked outside that shot some crazy red light through the blinds for a spell. (And in light of my last post regarding sun and cards, I'm getting nervous about my Goonies display and might have to rotate in something else for that spot soon.) 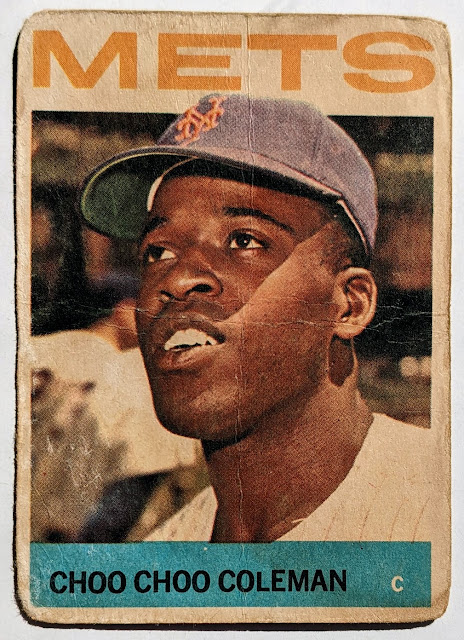 Back to cards, this isn't just any ol' beat-up '64 Topps Choo Choo Coleman, but rather... 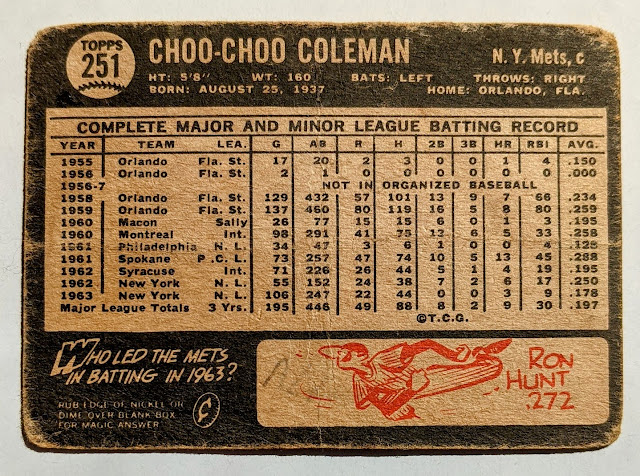 ..My first Venezuelan card! I suppose this can be counted as yet another blogger-inspired purchase. Brian at Completely Subjective has been working on the set and shows off a few from time to time. I basically sorted by cheapest available and found one that caught my eye. Coleman didn't have much of a career, best remembered as a member of the hapless '62 Mets, but the fun nickname helped push him over the top here. Plus, turns out spot #251 is open in my Vintage Frankenset, so it's got an official place in my collection and everything. 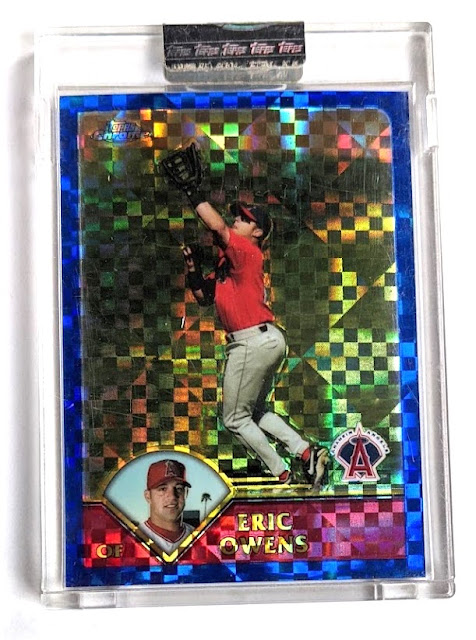 Picked up a sweet addition for my Eric Owens PC numbered out of 25 (but not the xmas card, sadly). With modern non-star players like this that I collect, I've decided I'd like to start focusing on refractors. TCDB lists 245 total cards for Owens, with just 17 of those being refractors. Unless I really get obsessive about it, I'm not likely to ever acquire all 245 of his cards, but finding 17 of them is much more realistic, especially when you consider that the lowest-numbered of those 17 cards is pictured above, so it should be downhill from here. (Seems he retired right before the Superfractor era, luckily for me, so no 1/1s to worry about. [Like, literally, his final Chrome card was the last release before Topps started including superfractors.]) 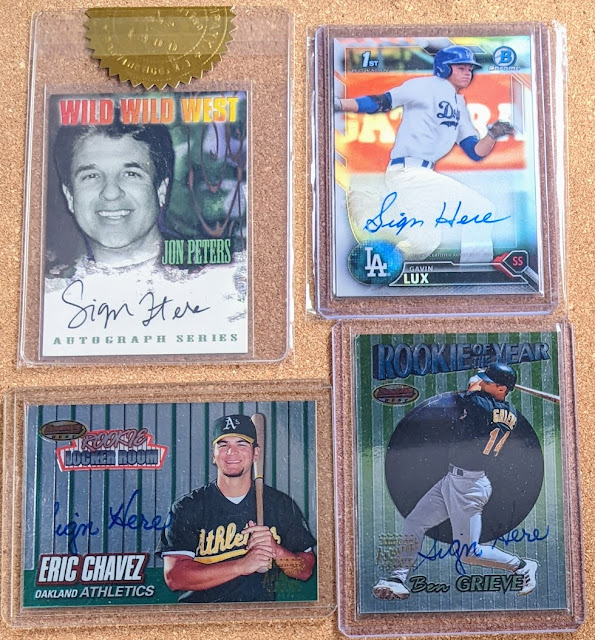 Here's a photo of my "Sign Here" minicollection, with Jon Peters being the latest addition. He's a slimy Hollywood bigshot who's been involved with making such films as A Star Is Born (1976) and Batman (1989), in addition to Wild Wild West (1999) where this card originates. I tweeted out this pic and it went viral by my standards. It's funny because sometimes I tweet out something I think is gold and it ends up with maybe 1 or 2 likes. And then there are the rare times a throwaway tweet gets retweeted by more popular accounts and ends up "doing numbers". But yeah, my anxiety had been running high already, and I was like "Nope!" ..more attention from strangers than I was comfortable with at the time, and it ultimately shook me off the app for at least a while. But I think it was the right choice and my mental health quickly began improving. I'm mentioning it here not to make a big deal out of it, but mostly to give a heads up that I might not be very responsive these days if you tag me or message me on Twitter. 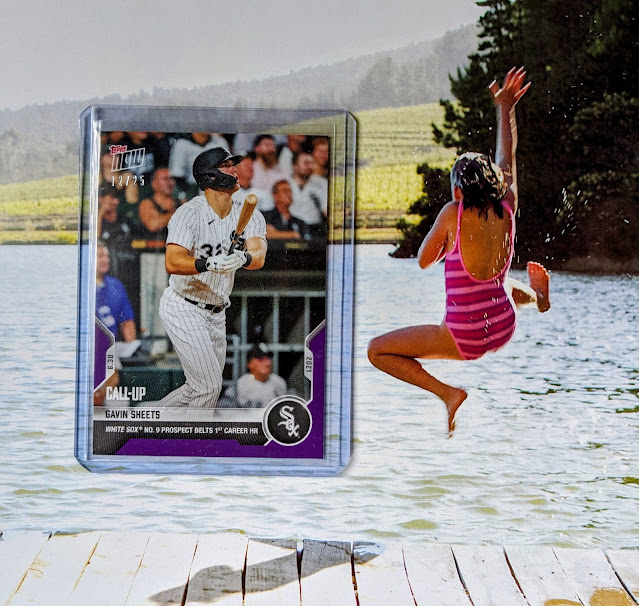 Random backdrop for this one ("came with the frame"), but I hope Gavin Sheets makes a big splash this season. Haven't seen confirmation he made the team out of spring training yet, but hope so. This Christmas Card from last year's Topps Now "set" sat on my watchlist for a while until a seller offer and eBay Bucks promotion combined for a better deal. I'm on the fence about chasing any of his 2022 cards, but yeah, he's one of the few active players who's still kinda got my interest. 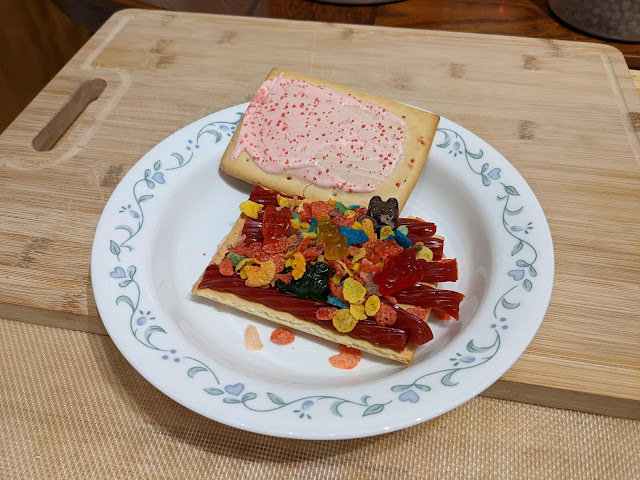 While the April Fools post was scheduled months in advance, I made a pop tart twizzlers sandwich again for dessert that night, as it seemed like the right thing to do. This one got kicked up with a few gummy bears. And this is just one example of the over-the-top desserts I enjoy on a regular basis. (Perhaps improving my diet could help improve how I feel? Yeah, probably.) 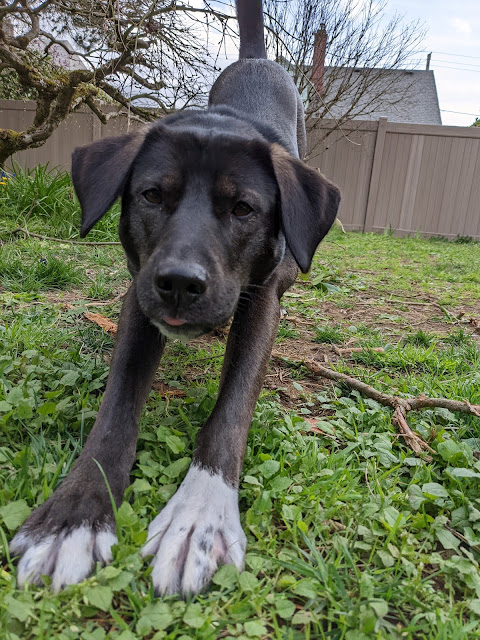 Another cute dog pic. I love the shit-for-brains, but she's a lot. Always looking for action, with near limitless energy. Unlike my previous dogs, she adds to my anxiety more than she soothes it, thanks to constantly being up in my shit. She gets plenty of playtime and attention, but it's tough to tucker her out, even with multiple doggie daycare days per week. Hoping she chills out as she gets older. 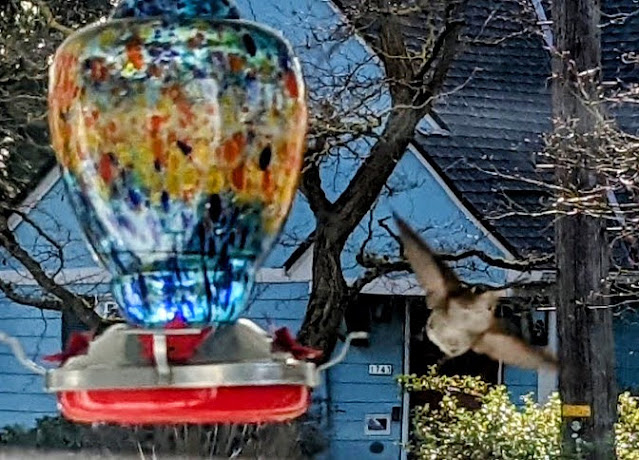 Neat shot of a hummingbird flying off just as I was taking a photo of it at the feeder.

Probably a good one to end on. Thanks for reading!