Johnny on the Spot


The spot in Johnny's Trading Spot has been my mailbox lately, with 4 PWEs arriving over the past few days, with some 2001 Archives needs promised on the way before long, too.

First arriving were these things Topps apparently used to teach kids to play the Lotto. 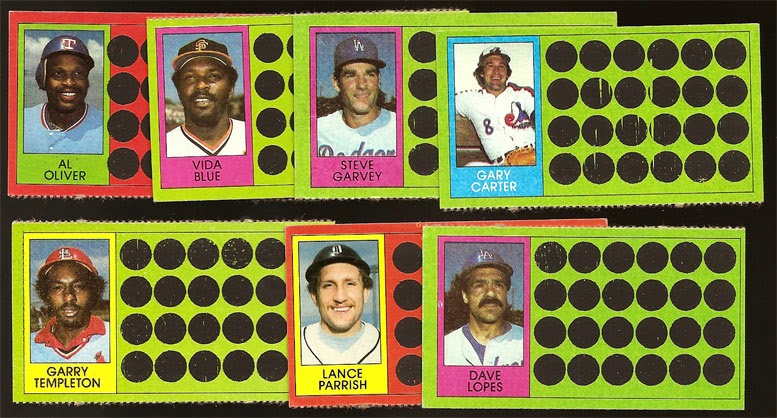 These are pretty cool. Smiles all around!

The other three envelopes were jam packed with various random Padres. While I try to avoid getting a reputation as a dumping ground for Padres commons, I always seem to find at least a few cards I need/like in such lots. The highlight here for me may have been these Dave Staton cards: 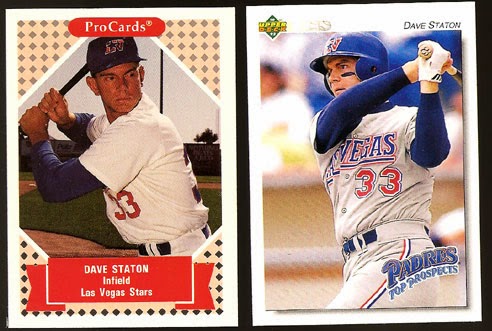 He was one of my favorite prospects back in the day. The next Mickey Mantle, if you asked pre-teen me. But of course he flamed out and never did much in the majors. In the back of my mind, I still can't shake the expectation of him being an all-star one of these days, even if he is now in his 40s and long out of organized ball at this point.

Speaking of my fantasy world, that song linked above is a guilty pleasure of mine from the 80s. When I was younger, I thought it was about a guy who cheated on his girl with a dude. Like, "Who's Johnny?, she said," she's asking, "Who the hell is this Johnny guy you've been messing around with?!" Now that I'm older, and have listened to the lyrics better, I no longer believe that's what it's about. But in my mind, I like to continue believing is an 80s pop song about a guy getting caught in a homosexual affair. It makes for a funnier song.

But back to Dave Staton.. If the parallel craze as we know it were around back then, I probably would have rainbowed the guy pretty hard. Lucky for me my biggest expenditure on him was a 1990 Pro Cards minor league team set that probably set me back around $7 and I dumped in the purge when I moved away from San Diego. But now I'm caving to sentimentality and rebuilding my Dave Staton PC.

And here's a similar guy I thought was a can't-miss prospect who turned out to be can-miss. 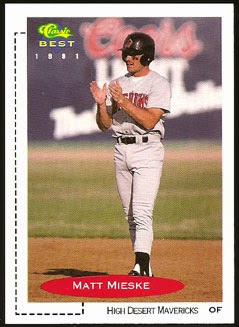 For some reason, I was a big High Desert Mavericks fan as a kid even though I didn't live near there or anything. But I bought a cap at some big sportswear store and wore it a lot. It was a cool logo that you can't see that well on Mieske's card. So here:

But really, these guys crushed it in the minors. Just look at these stats! 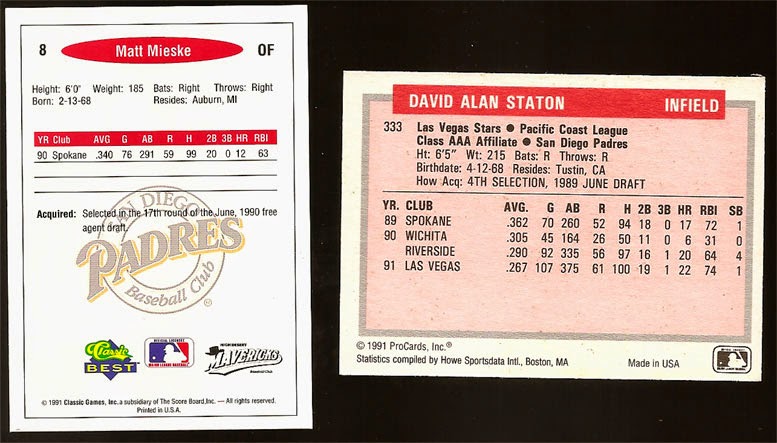 The Kings of Spokane! High averages and lots of dingers. Building off those numbers, there should have been a Padres dynasty that stretched for many years and saw several World Championships. Didn't happen. Oh well. Someday we'll draft our "it" player who brings it all together. I have to believe that. It's the only thing that gets me out of bed in the morning. (I exaggerate. But no. Really. Just give me one championship and I'll die happy. Preferably Padres, but I'd settle for Chargers.)

Matt Mieske never played for San Diego, going to the Brewers in the Gary Sheffield trade. But at least he made it into 663 MLB games over his career.

Staton was less successful, only seeing action in a total of 46 games spread over a couple years.

But anyways. Thanks for the cards, John! I'll get a bunch of Braves and Diamond Kings out to you in the next day or so.
Posted by defgav at 3:52 PM