I'm still getting caught up with everybody's blog posts I didn't have a chance to read many while I was on my recent trip to Louisville. I couldn't bare to just skip them, so I'm at least trying to skim.

I'm also trying to get through a backlog of things to post about, so this may be a big post as I try to make up some ground.

A few random bullet points:
I'm still catching up on incoming trade packages. Let's check out one that arrived shortly before I left for my trip. It's from Hunter Hoffman at the new blog Brave Country Cards. It was my first time trading with him (and I gotta admit I hadn't read his blog), so I wasn't sure what to expect. It consisted of a few team bags with "junk" showing, so I worried for a moment that it was gonna be one of those packages where I'm lucky if I find a couple cards I actually need. But thankfully those commons were just there for protection, and there was some terrific stuff between them. 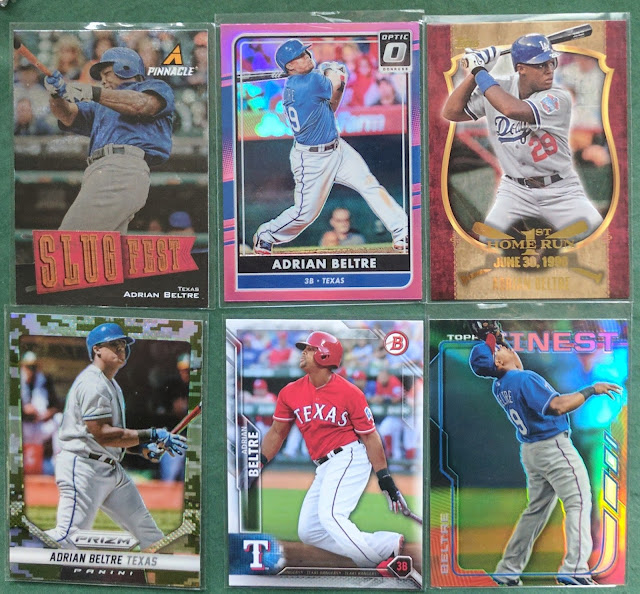 Like this awesome 6-card lot of Adrian Beltre cards. He got a bunch of attention just recently for his stunt moving the on-deck circle and getting tossed from the game because of it. Gotta love the guy! 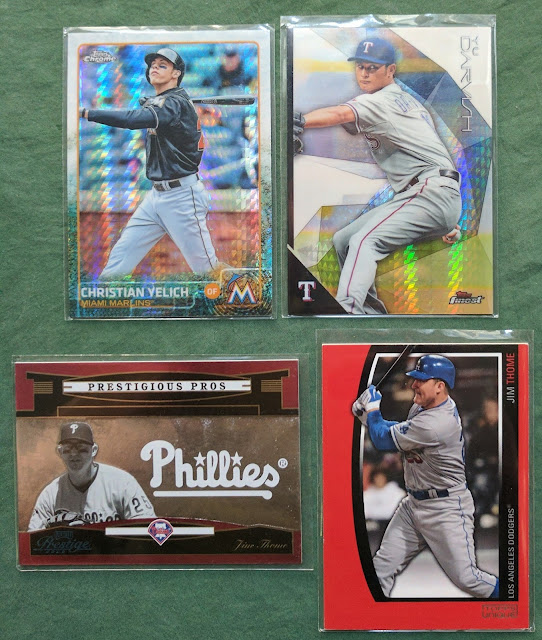 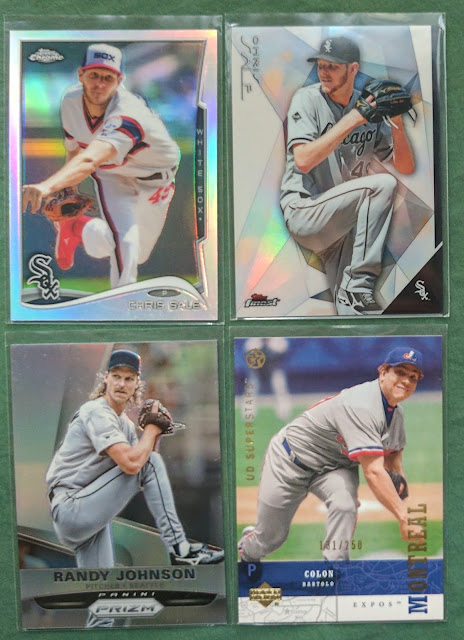 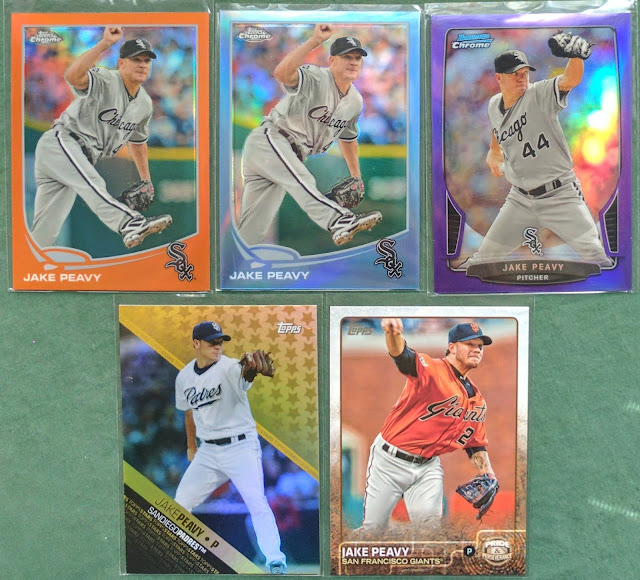 Incredible Jake Peavy lot here. He's taken the 2017 season off so far due to personal reasons, but intends to pitch again at some point. 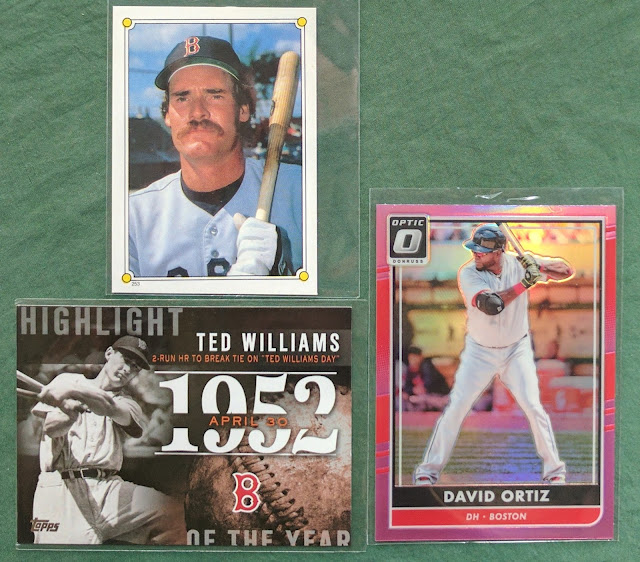 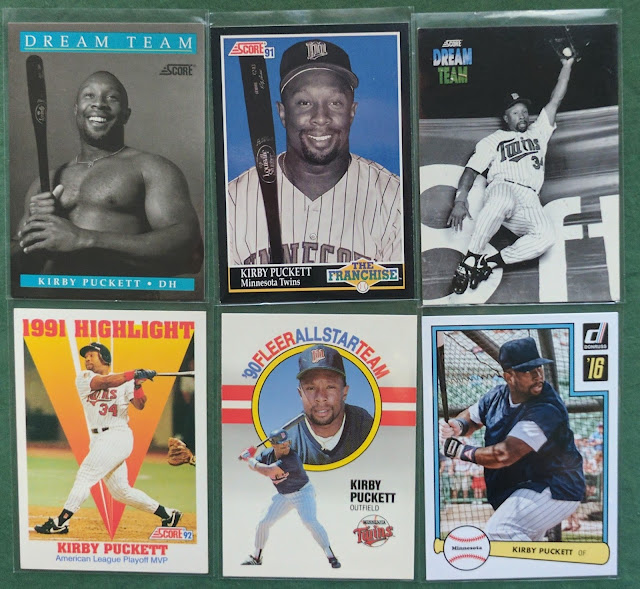 Kirby! My recently revived Puckett PC is coming along nicely thanks to lots like this. 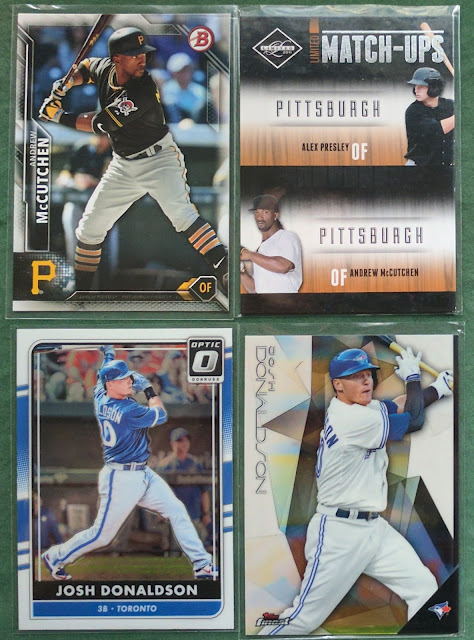 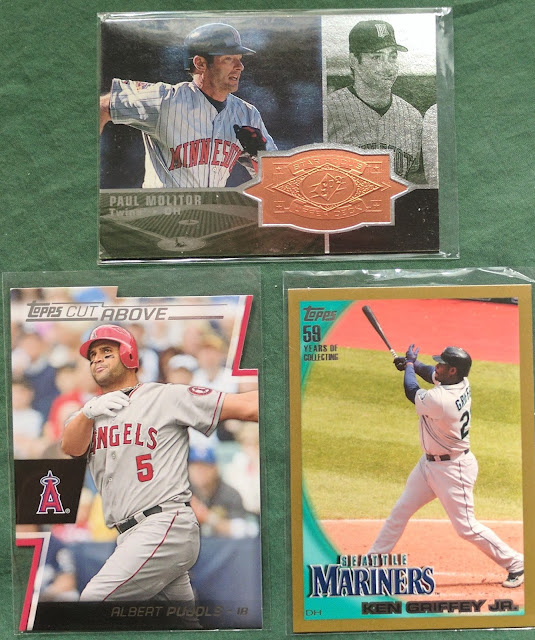 Some big names here, highlighted by a gold #'d Junior. 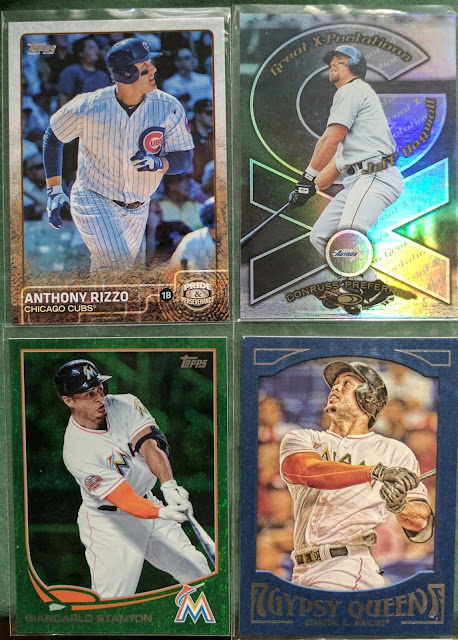 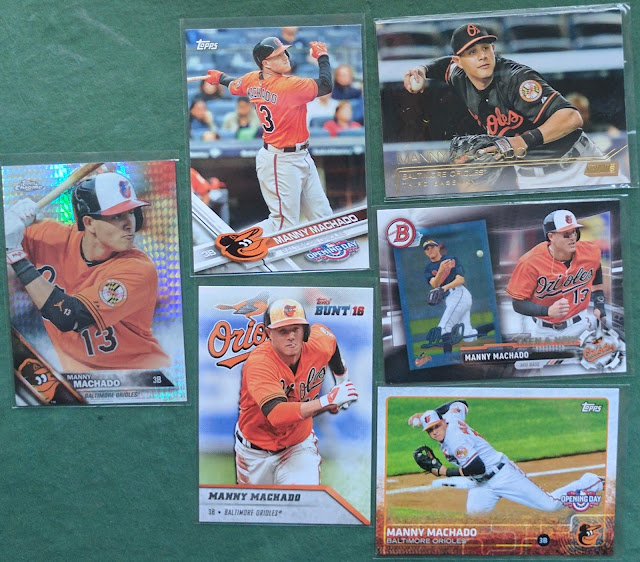 ¡Ay, muchacho! Machado in the house.

And we wrap up the package with a shiny trio of familiar faces to Padres fans.

Great stuff, Hunter! Blew me away. Now I've got the challenge of putting together a worthy return package. I'll get on that shortly! I'm also following Braves Country Cards now and will update my side blogroll soon.

Let's squeeze another trade package into this post. Remember The Turrdog, the mysterious reader in my Big Fun Game? He has quickly proven himself as a hell of a guy, first sending me a nice "thank you" package for his prize, now surprising me with a flat-rate box. 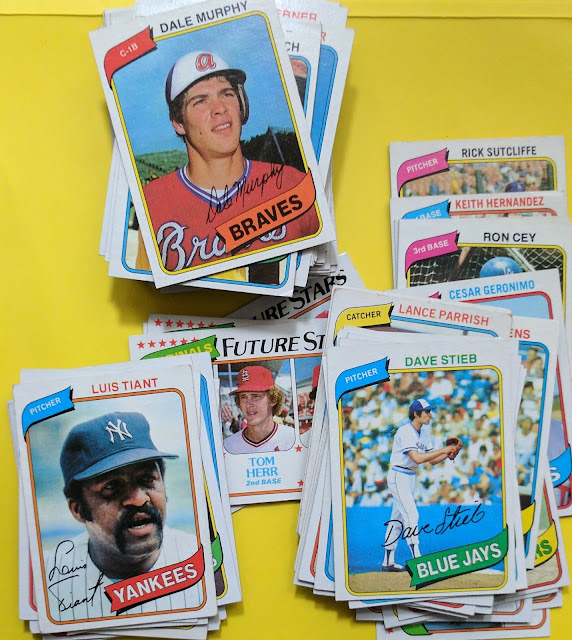 My pending 1980 Topps setbuild is looking good with this lot of probably ~75 cards featuring some solid names such as a Dave Stieb RC. Once I find some time one of these days, I need to collate what I've got and get a list figured out. 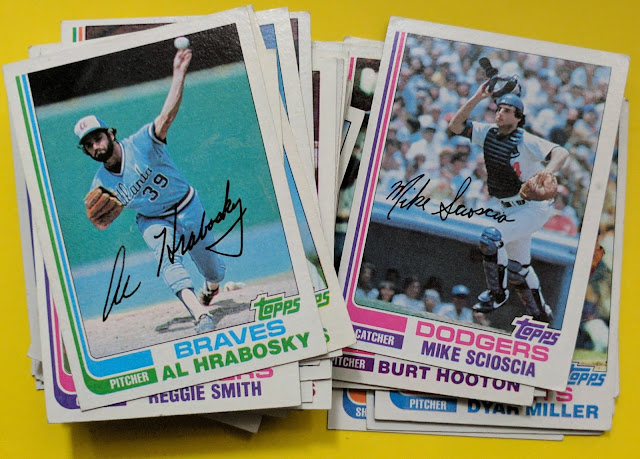 I'm also toying with the idea of working on 1982 Topps at some point in the future, and now I've at least got my foot in the door with this lot of about 50 cards. 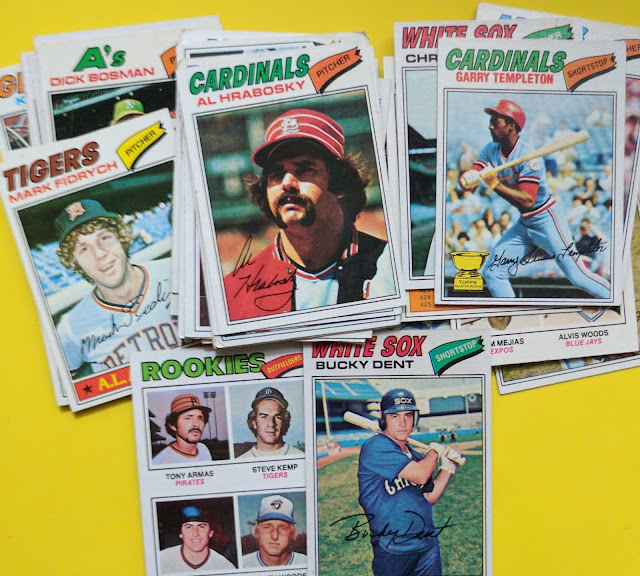 Ah, the "birth year" set for me. Sort of feels like an obligation to complete it someday. Not a bad lot here to get me started. I should have positioned the Fidrych card front and center instead of obscured and fuzzy in the back; it's definitely a classic. (But I'm afraid to argue with the Mad Hungarian there.) 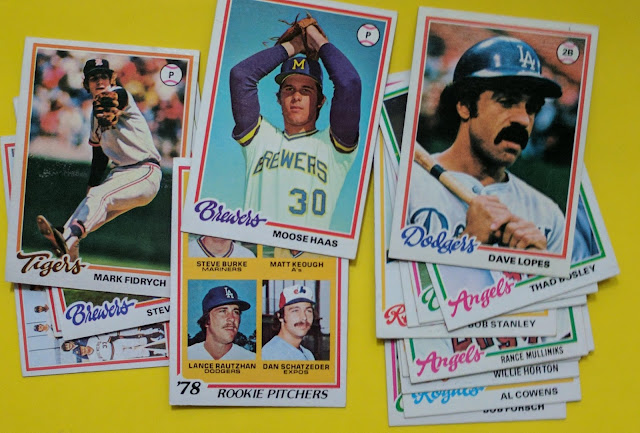 I was actually born in the tail end of '77, so as P-town Tom suggested in a comment a while back, 1978 Topps probably has more of a claim to being the representative baseball card set of my entrance into the world. So, fine, screw it, I added '78 to my list of sets to potentially work on someday, too. Turdog helped boost up their numbers in my collection with this lot of 15 or so cards. 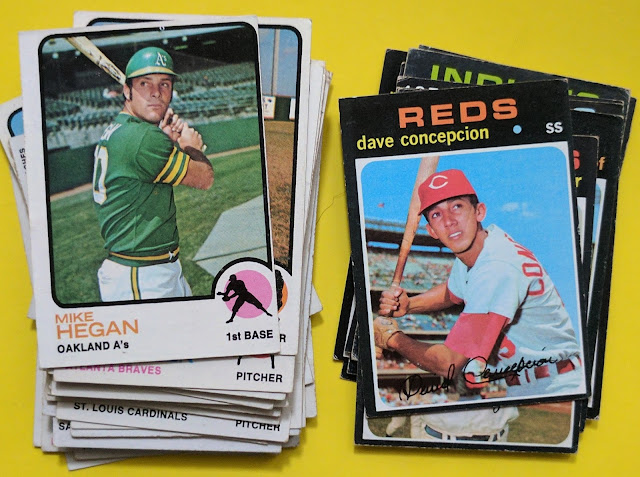 And I've already completed 1973 and 1971, but I'm sure I'll be able to pluck many upgrades out of these stacks. Mike Hegan is a player who didn't mean anything to me a week ago, but now I'm like, "Hey, he's in Ball Four! Cool!" haha. And that Dave Concepcion RC looks pretty sweet. 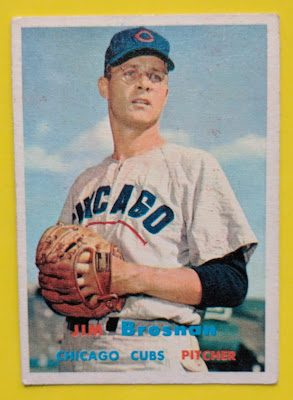 And we close out with this beauty from 1957 Topps. 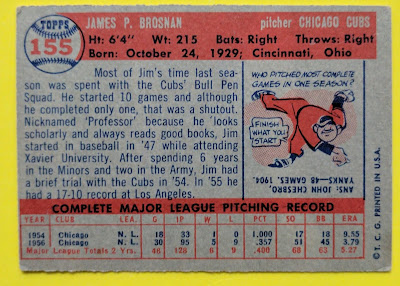 Thanks so much, Jeff! Big help for my setbuilds.. Very appreciated! I'll have to round up some stuff for you to return the favor.


Thanks again to Hunter, and to the rest of you all for reading. See ya next time.
Posted by defgav at 3:25 PM