Pack Skirmish: Elvis vs. Rap in an epic battle

It's time for another Pack Skirmish. This time it's Elvis Presley pitted against rap stars of the late 80s/early 90s. 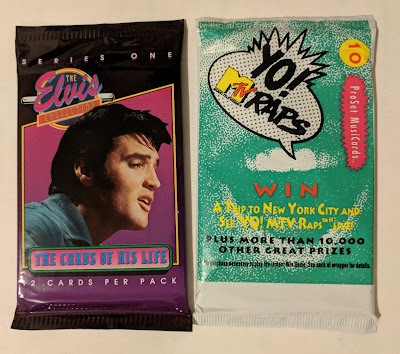 The impetus for this is I need an Elvis card (any Elvis card) for a dumb collecting project I've been toying with starting up. And since it's a music-themed month here at Baseball Card Breakdown, I thought it'd be a good post to do now. (And who wants to talk about baseball right now with all the heartbreaking evil afoot in the postseason?)

The Elvis pack was thrown in with a trade package from SCC last year, while the Yo! MTV Raps pack arrived in similar fashion from the Junior Junkie. Now let's pit them head-to-head! 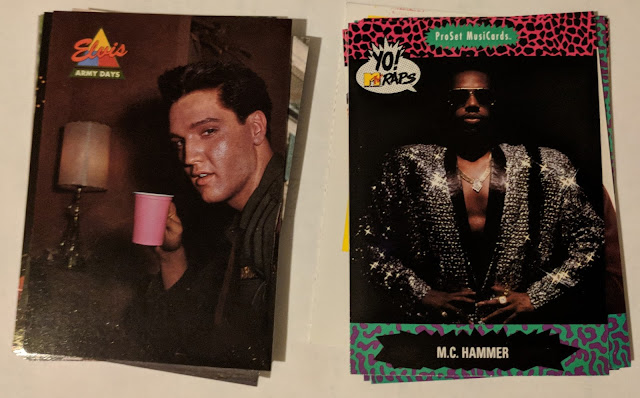 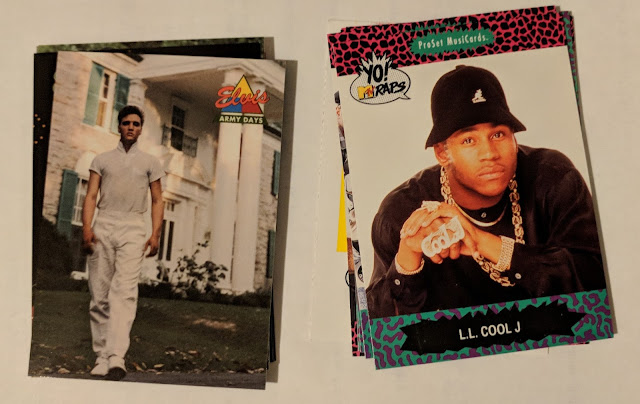 I opened a couple packs or so of these Yo! MTV Raps cards back in the day, and I know I had that LL Cool J card. I remember even doing a sketch of it in my middle school binder. Keep on walking, Elvis. 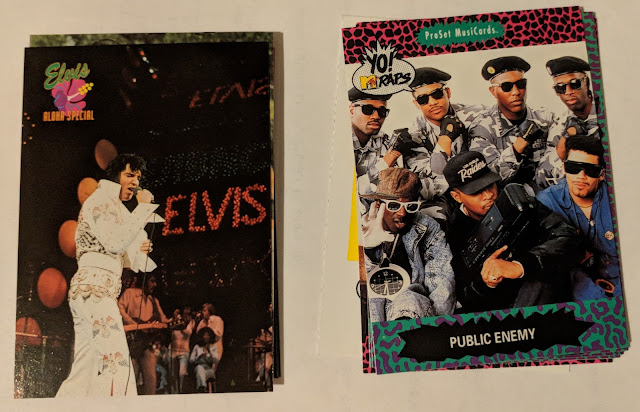 Oh man, there's no love lost in this matchup, as Public Enemy dissed Elvis in their song "Fight the Power". I like a few PE songs, but I think I gotta go with Jumpsuit Elvis here.
Elvis - 1
Rap - 2 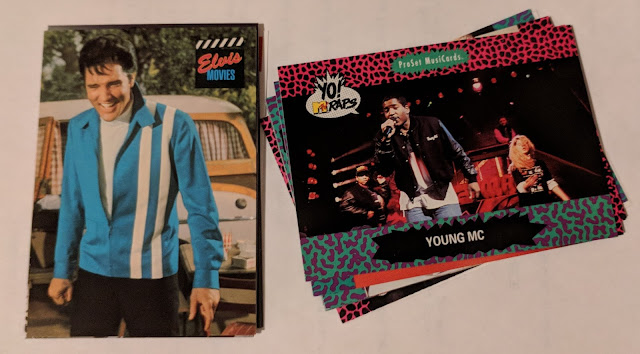 Young MC's Stone Cold Rhymin' was one of the first cassette tapes I ever bought. That album was pretty huge thanks to the hits "Bust a Move" and "Principal's Office" though I pretty much dug it from start to finish. Easy win for rap here.
Elvis - 1
Rap - 3 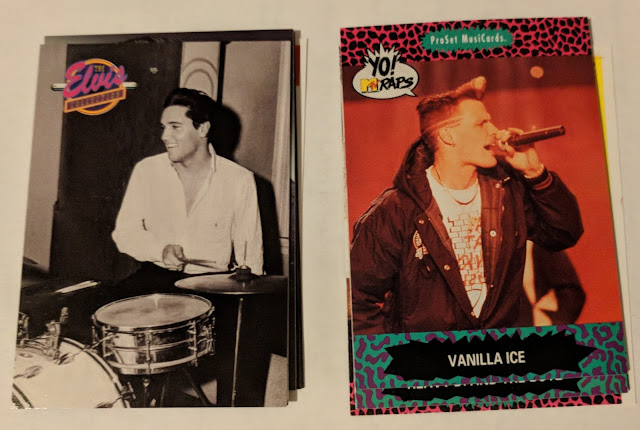 Oh man, this might be the toughest round of the skirmish! Vanilla Ice rookie card! That's another card I owned back in the day, and also remember sketching this picture somewhere too. But Elvis on the drum kit?! That's like pulling a card of a pitcher wearing catchers' gear! Point: Elvis.
Elvis - 2
Rap - 3 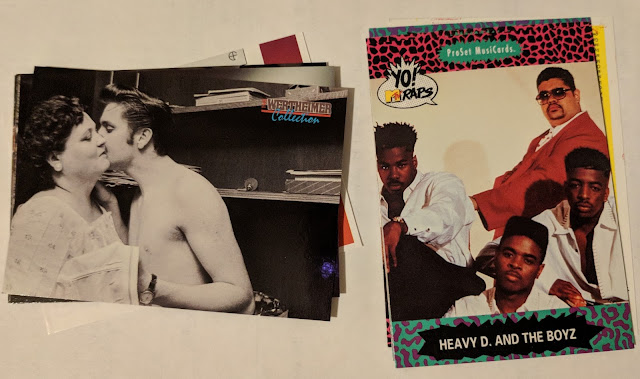 Shirtless Elvis in an awkward moment with his mom? No thanks! The point goes to Heavy D and the Boyz. I always liked the In Living Color theme song from them. It's never too late and it's never too soon. Rap scores an insurance run.
Elvis - 2
Rap - 4 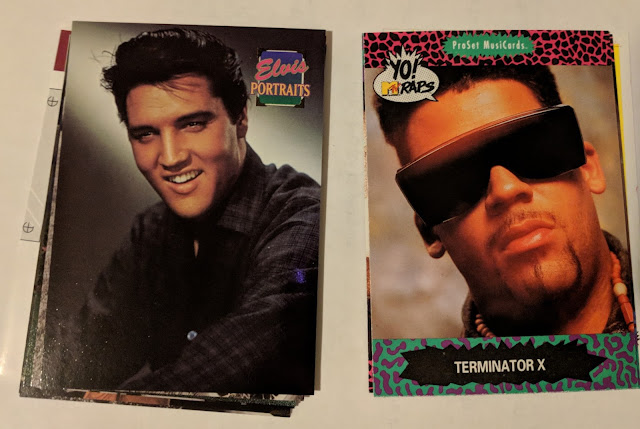 That's a nice portrait of Elvis. Terminator X? Wasn't he part of Public Enemy's crew? Not sure how he ended up with his own card. That'd be like pulling a card of the Marlins' pitching coach. 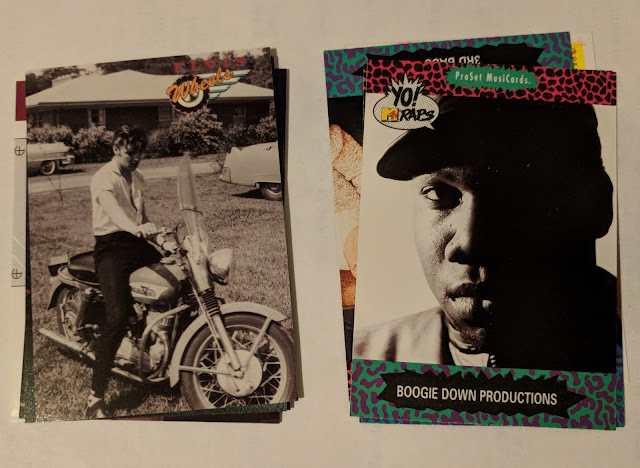 Jeez, this is a tough matchup. I'm down with KRS-One, but young Elvis on a hog is pretty badass. We've got a tied game!
Elvis - 4
Rap - 4 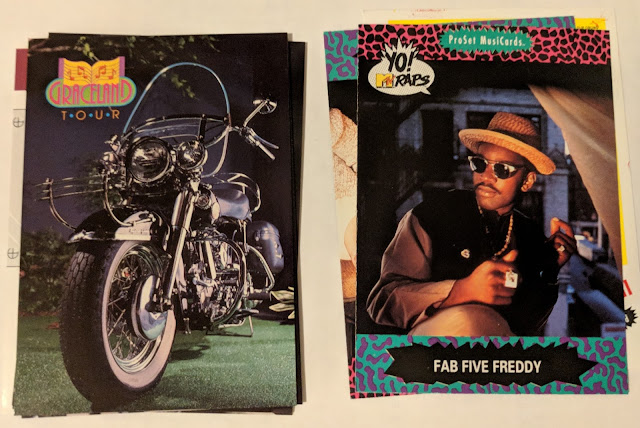 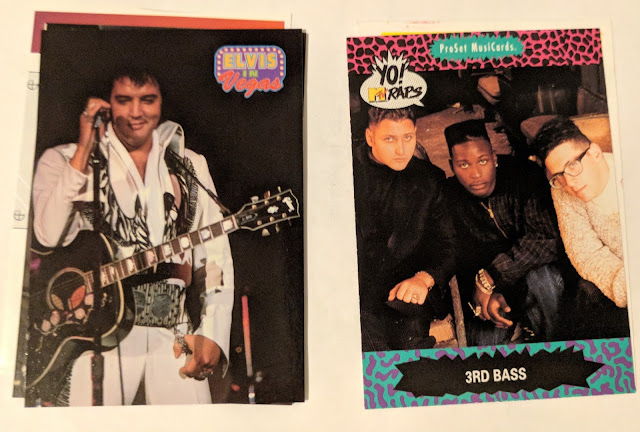 Hmm.. I sure do like that "Pop Goes The Weasel" song 3rd Bass had, but that's all I know from them. Elvis looks pretty cool here with a dangling acoustic guitar. Viva Las Vegas.
Elvis - 5
Rap - 5 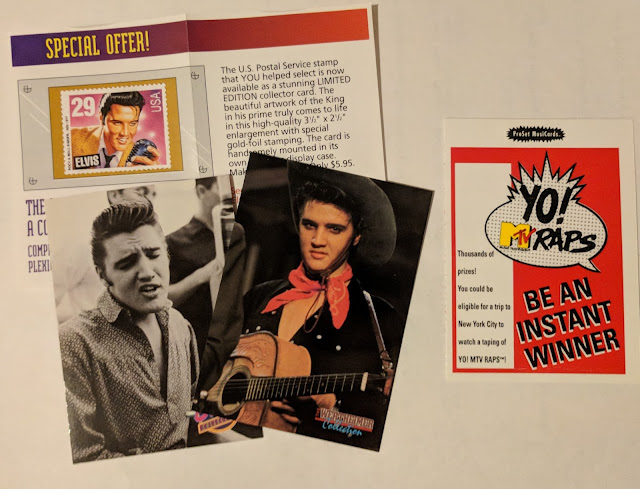 Here's the grand finale. A couple "offers" but no more rap cards. Elvis lands a pair of unanswered blows.

Presley pulls off an exciting come from behind win!


Thanks for reading and have a great weekend.
Posted by defgav at 3:08 PM