I thought last month's box of 2014 Prizm Draft was the penultimate box from my Black Friday stockpile, and so I'd be freed from this product with the next box. But I miscounted and turns out I had 2 left. So I get to use that fancy word penultimate again. 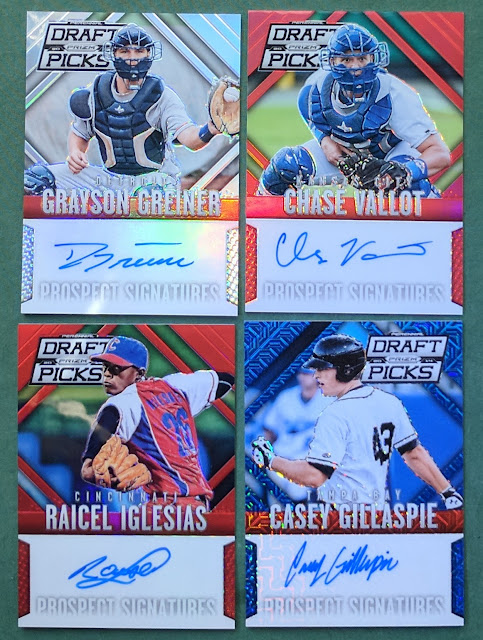 Decent auto haul, with one base auto, a couple red parallels (#/100) and a "blue mojo" (#75).
Grayson Greiner has made it up to AAA, and could find himself as a backup catcher in Detroit within the next couple years. Photos of guys in catching gear are nice on unlicensed cards so you don't miss the logos too much.
Chase Vallot is a catcher in the Royals org. Nothing too notable yet, but he's only 21, so we'll see.
Raisel Iglesias (listed as "Raicel" on the card.. is that an error?) is already an established major leaguer. He was a dependable bullpen arm for the Reds in 2017, leading the team in ERA (2.49) and ERA+ (177). He had 28 saves (for a last-place team that only won 68 games) and was 2nd in the NL with 57 games finished. And the photo shows him in his Cuban uniform, so Panini is able to squeeze in a logo.. cool!
Casey Gillaspie was traded to the White Sox from the Rays for Dan Jennings earlier this year. Hit hit .223 with 15 homers in AAA this season. 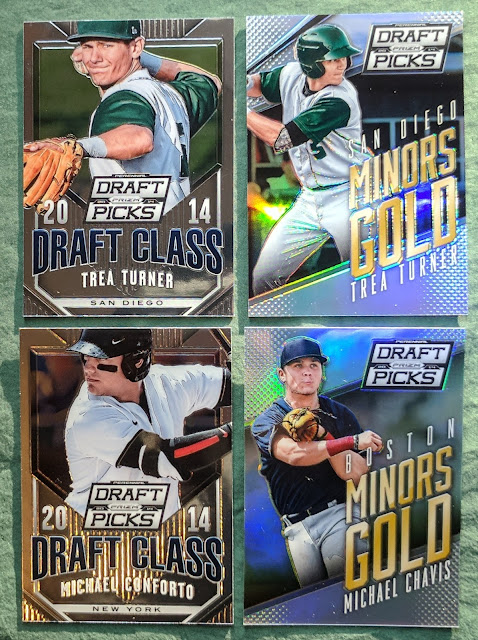 I was happy to pull that Trea Turner Minors Gold. I've opened a bunch of boxes of this product, and always had these inserts fall one-per-box, so it pleasantly surprised me to pull 2 in this one. Michael Chavis had a nice 2017, with a .910 OPS splitting time between A and AA.

It's odd that some guys in this product have base cards in addition to the Draft Class inserts, though some guys, such as Turner and Conforto, only have inserts. I didn't realize that till this box.. I'm like, "damn, this is like the 3rd time I've pulled Trea Turner's Draft Class card, but haven't pulled his base card yet!" and it's because he doesn't have a base card in there. 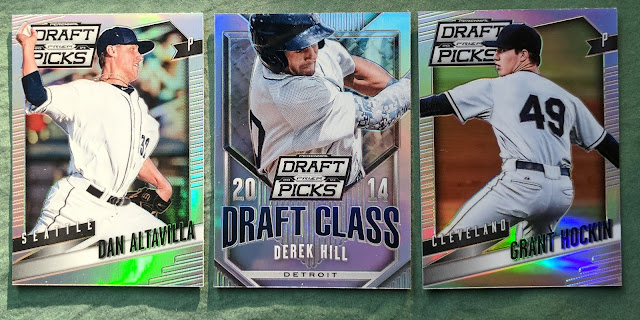 Regular refractors ("prizm prizms") I pulled include Dan Altavilla (pitched ok in Seattle this year), speedy Derek Hill (100 career stolen bases in his 4 years in the minors), and Grant Hockin (who seems to have problems staying healthy).

The colored refractors of the box weren't bad: Faded Jays prospect Dalton Pompey (/100), our second appearance of Grayson Greiner (/60), and perhaps the best card of the box, Kyle Schwarber (/100). Schwarber is another guy who doesn't have a base card in this set, just 3 different inserts. He's struggled since his World Series heroics of last year. I'm sure Cubs fans are hoping he can tap into his October magic once again.

So there you go. For the sub-blaster price I paid for it, I'd say that was a solid box.

Only one box of this stuff left and I'm beginning to give up on my hopes of pulling a Trea or Scwarbs auto. But we'll find out next month.

Oh! Since all this month I'm showing off my musical memorabilia and whatnot, let's take a look at a couple autographed CDs before finishing this post. These 2 are technically my wife's, and she got them signed in person at record store appearances a few years before we hooked up, but I happen to like both artists too, so I'm happy to absorb them into "our" collective collection. (I don't have any interesting Social Distortion stuff, which is too bad because it would have really tied the post together!) 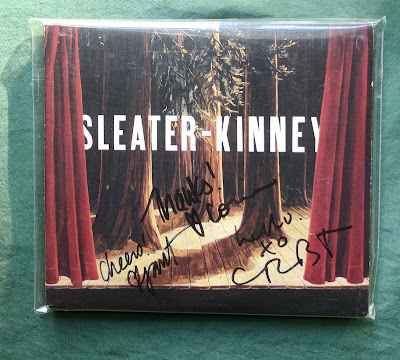 Pretty cool signed copy of Sleater-Kinney's album The Woods. All 3 members of the trio are accounted for here: Corin Tucker, Carrie Brownstein, and Janet Weiss. Carrie is the most recognizable these days thanks to starring on the show Portlandia. (And card collectors may know her for having a First Pitch insert in 2016 Topps.) But yeah, they're probably my wife's all-time favorite band. We saw them on their reunion tour a couple years or so back and had a great time. 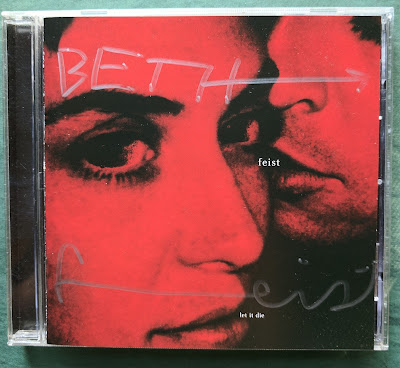 And here's a signed cd by Feist. Her biggest hit was that "1,2,3,4" song that you've probably heard in commercials even if you're not really into this type of music. I saw her live once back in 2006 and she put on a great show. (One of my goals for Rocktober is to finally finish the big list of shows I've seen.. been working on it off and on for years. So hopefully I'll get that completed and feature it in a future post.)


That's it for today. Have a great weekend, everybody!
Posted by defgav at 4:38 PM