Taxman bassline, some random cards, and a special offer

The first instrument I really got into playing was bass guitar. My two best friends played guitar and drums, respectively, so it just made sense that I would complete the presumptive trio (that never really came together in the end). But anyways, bass is my first love and learning to play it gave me a greater appreciation for good basslines.


One particular bassline that's always been a favorite is the main riff of "Taxman" by the Beatles. It sounds great plus it's fun and easy to play. You don't even have to move your arm around the neck of the bass, as all the notes you need are right there in the middle. I've noticed an "homage" to it popping up in a few other songs, and thought I'd work a post out of it. And I'll try to pair up a recent card pickup of mine to each song to keep us on focus.

Bauhaus - Too Much 21st Century

This song from Bauhaus' reunion album from a few years back walks the fine line between homage and blatant ripoff, but I like it. What are your first impressions? 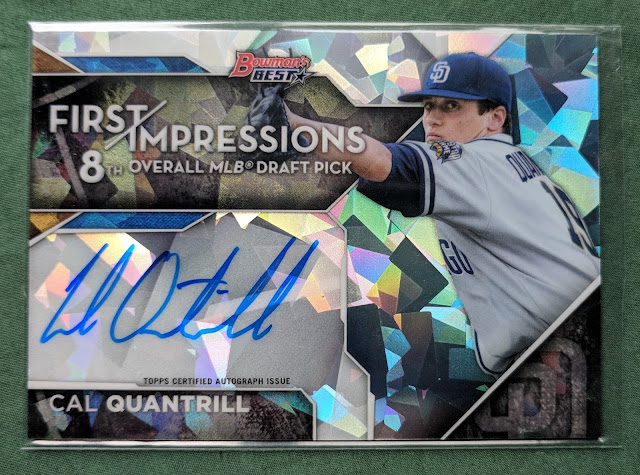 This card kinda fits in with the song, I guess. It's my first auto from Cal Quantrill, last year's #1 draft pick of the Padres. He had a solid 2017, advancing to AA. We'll probably see him in San Diego in a year or two. Gotta love these "cracked ice"/"atomic" refractors.


Here's a cool punk song that busts out the Taxman bassline in the bridge (starting around the 1:45 mark) (Head's up, they drop a prominent F-bomb, so be careful around innocent ears). 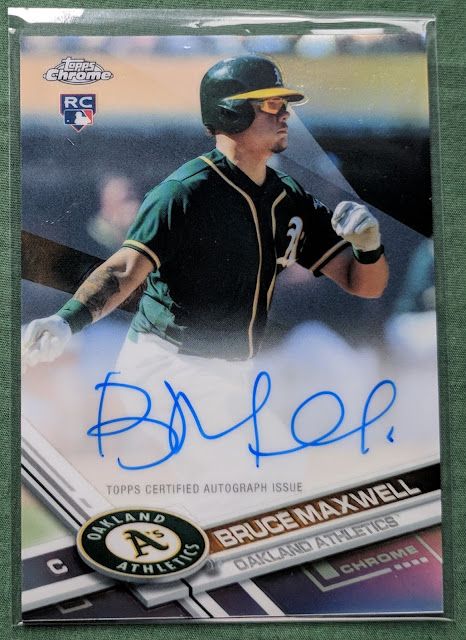 Rancid is from the Bay Area, so let's match them up with a refractor auto from A's rookie Bruce Maxwell. I think his story fits well with the song, too.


U2 - Some Days Are Better Than Others

U2 changes the bassline up, almost reverses it, but at its core, I still hear it as an interpretation of the familiar Taxman groove. 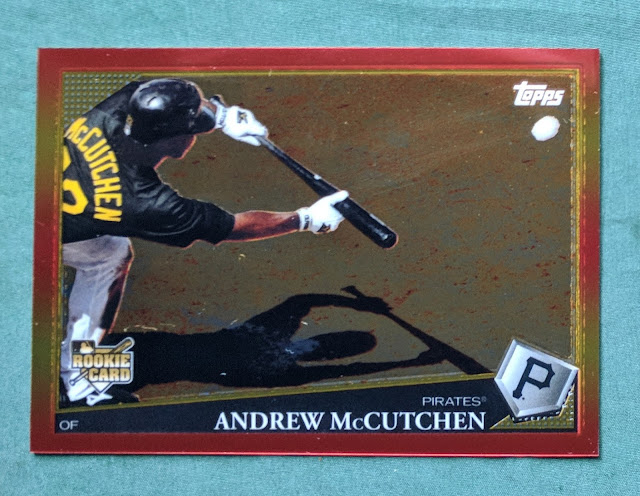 For Andrew McCutchen in recent years, some days are better than others, as he has been very streaky with the bat. But overall he had a solid bounce back from his down 2016 season. I feel like my Cutch PC is at a good place and generally don't seek out his cards anymore, but I had been keeping an eye out for a deal on a 2009 Topps Red Hot Rookie Redemption-- just a cool prominent rookie card of his I wanted to score-- and recently landed this one for a good price.

The Beatles allusion in this Boingo song is no accident, I'm sure. In fact, the same album also includes a cover of "I Am the Walrus". "Change" is an epic 16 minute song, and you can catch the Taxman bassline creeping in around the 1:40 mark. 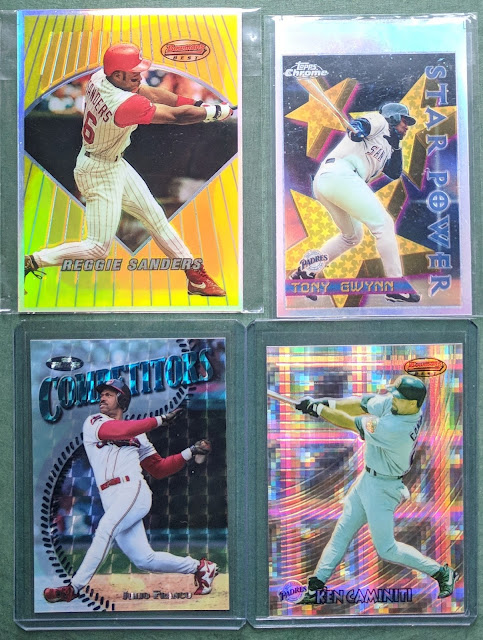 Since it's such a long song, I'm going with 4 cards for it. These all come from a seller on eBay who had a bunch of various "proof" cards from Chrome/Finest from the mid 90s to early 00s. I think these are pretty cool, though many collectors don't concern themselves with them since they weren't "packed out" traditionally. The Reggie Sanders 1996 Bowman's Best Gold Refractor is oversized, not yet trimmed down to standard size. The 1996 Topps Chrome Star Power Refractor Gwynn also needs a little off the top. I love the Julio Franco 1997 Finest Silver Refractor.. with a similar refractor design to superfractor "wheels". It's proof quirk is that it's not embossed. My favorite here might be the Ken Caminiti. I love that style of Xfractor (er, excuse me, they were actually called Atomic Refractors in 1997 Bowman). The final version of this card has "Best Cuts" on the left side, but I prefer this proof card without that text.

Any other songs out there with the Taxman bassline that I missed? Let me know in the comments!

I've had a couple guys take me up on my offer for a bunch of CDs for the price of shipping, but I've still got a lot left and I'd like to try giving it another push here as Roctober winds down. I've got a few USPS Medium Flat Rate boxes I would love to fill up and send out.

Here's my latest offer:
An even $20 Paypaled will get you shipped a box (US-only) with a bunch of CDs (you can pick out what you want from those I've got available, and I'll throw in a few recommendations), plus I'll fill the rest of the box up with many cards for you. I'll try to weigh it heavily on your favorite team(s), but it'll be a random mix for the most part.
Also, you can pick one of these encased autograph cards... 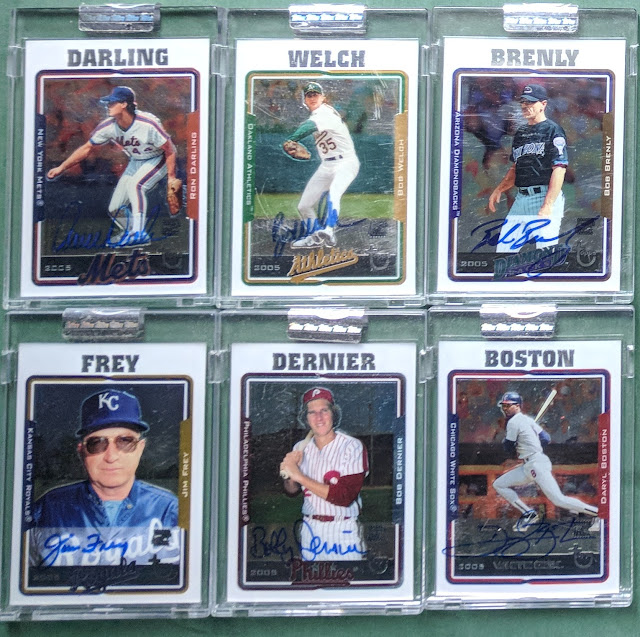 And one of these encased serial-numbered cards...

Encased cards like this are kind of a pain to trade because they're heavy and jack up the postage, but it's not an issue with flat-rate boxes. Some of the autos have scratched up cases, but the cards themselves are in excellent condition, so you can pop them out of the case if you like (remove the sticker on top, then twist a quarter in there to pop open the case).

And just to give you something to chase, one of the 6 autos is also secretly bundled with this... 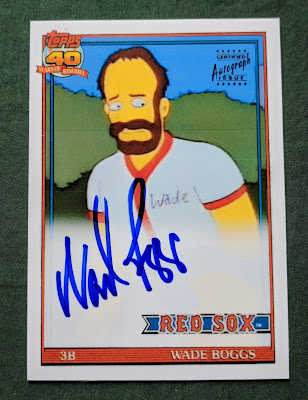 If you are lucky enough to pick the auto bundled with it, you'll also win this custom Simpsons Wade Boggs TTM autograph. Have you heard there's going to be a documentary-type-thing about that famous episode Sunday on Fox? I'm excited for that!

So who's ready to take me up on getting a big box of CDs and cards for the price of a blaster? Drop me an email and let me know what you're interested in! Trust me, I'll jam-pack that box with a bunch of great stuff and totally make it worth it for you.
First come, first serve. Offer expires 10/31/17.

I know not everybody has a similar taste in music, so you might not have much desire for the CDs I've got available, but just wanted to put together a solid offer for anyone who might have been on the fence. Again, I'd love to find good homes for them rather than just dump them with Goodwill.

As for songs in this post, the CDs with the U2 and Boingo songs are among those I've still got available. And there's a Rancid CD (Let's Go), though it's a different one from the one with that song on it.

Anywho, thanks for reading!
Posted by defgav at 3:41 PM