The New Book Value (more from the card show)

When I go to a card show, I'm keeping an eye out for cards I need for my collection (guys I collect, set needs), and sometimes just random cards that interest me, and of course I look for trade fodder for my regular trade partners.

And sometimes I buy a card because I suspect it's a great deal. I spend enough time reading card blogs and such that I can usually spot a rare/valuable card hiding in a stack of lesser cards. I mean, I'm sure there are plenty of variations and rare inserts that get by me (and plenty of stuff I don't know much about from the decade I stepped away from the hobby), but I'd like to think I'm pretty good at finding diamonds in the rough.

I rarely take the time to look up a card value while at a show, but once I get home, I'll look some of them up and try to determine my best deal of the show.

For me, the new "book value" is the cheapest one on COMC. I suppose another good way to find out what a card is worth is to check completed eBay listings for it, but that is a little more work and can have other influencing factors, such as time the auction ended and the seller's feedback. So while it's not infallible, I find looking up a card on COMC is quick and usually gives me decent idea what it's worth. 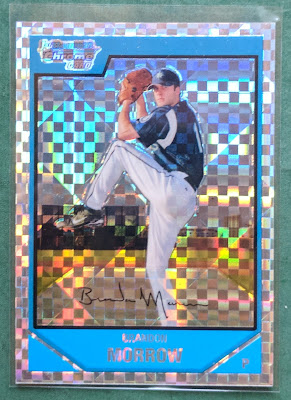 I think this might be my best deal of the show according to COMC. Brandon Morrow has been a key arm out of the pen for the Dodgers this year. This 2007 Bowman Chrome Prospects X-Fractor /275 cost me a quarter, but the cheapest on COMC right now is $15.25. Fifteen dollar theoretical profit!

Here's another "(Gold) Blue Label". After pulling a Cano auto recently, I'm tempted to get a little PC going for him. This one isn't on COMC currently. The Tim Anderson card falls into that "hmm, maybe this is a valuable card?" category and is a 2017 Topps Stadium Club Chrome refractor. It isn't on COMC right now either, but the regular Chrome parallel (non-refractor) is priced at $5.25, and I assume the refractors are tougher pulls. The Fisk 2013 Panini Hometown Heroes State parallel is a PC need. This White Sox card isn't on COMC, but his similar Red Sox card is $0.99.

A couple Beltres and a Brock. I've really enjoyed bumping up my Beltre PC over the past year or so. Finally pulled the trigger to kick it up further, which will be coming in a future post. 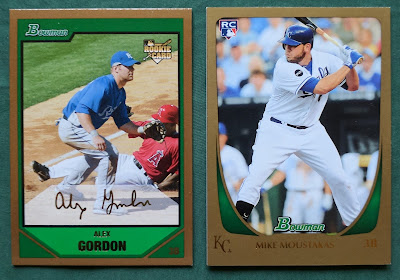 Brown mustard Bowman RC parallels of Alex Gordon and Mike Moustakas. These both run under a buck, but not bad. 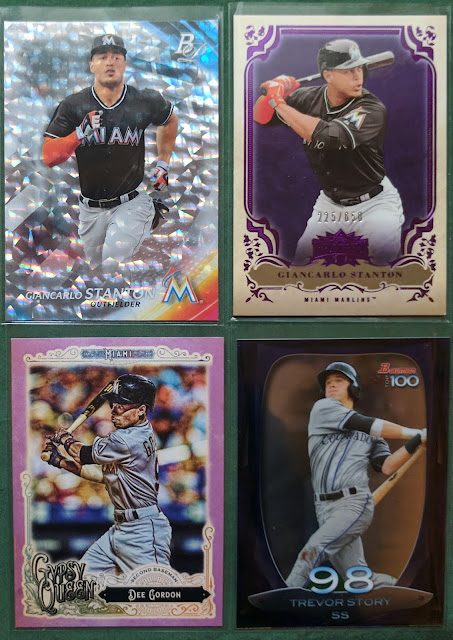 A couple fancy Giancarlo cards. Billy was asking about those Bowman Platinum "Ice" parallels the other day.. yeah, when I was thumbing through the boxes, I pretty much zoomed passed any Bowman Platinum card unless it was a parallel, as generally speaking, I'm not into that line of cards (not a big fan of foilboard cards), but those bubbly cracked ice parallels look pretty cool in the light. This one goes for $1.25 according to COMC. It surprisingly beats out the /650 2013 Topps Triple Threads card available for only 89¢.
Dee Gordon /250 is also $1.25, while the Trevor Story goes for 95¢. 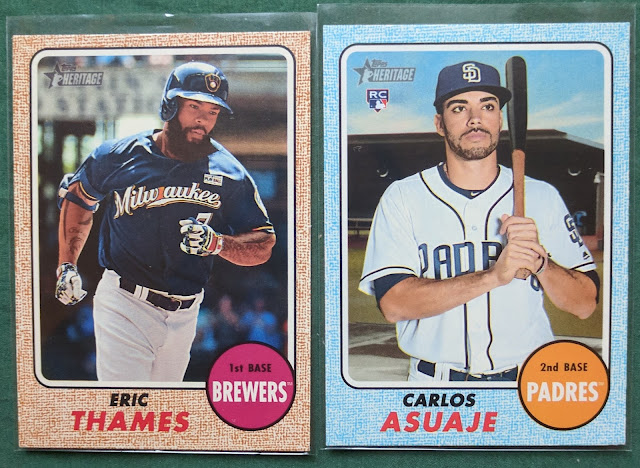 A couple 2017 Heritage High Numbers here. Honestly, I was just looking to get any ol' Eric Thames Brewers card, since his start to the 2017 coming back over from Korea was just awesome. Turns out this is the action variation, so my 25¢ investment balloons to $4.57, if we're going by the gospel of COMC. As for the Carlos Asuaje, as I mentioned recently, I'm a sucker for any blue burlap parallel, but I was especially happy to find this one of a promising Padres rookie. This one isn't on COMC right now, but the cheapest blue burlap card of any player on there is $3.50. 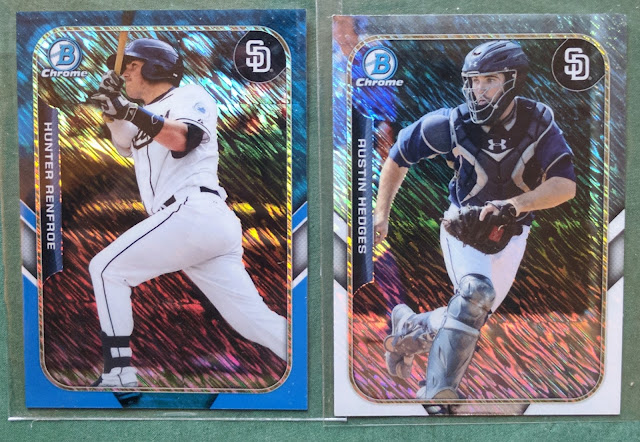 A pair of shimmering mini Padres here. The Renfroe is /150. It's worth over a buck, safe to say. And while listed at over a quarter (no cards are for sale on COMC for under 30¢), the Austin Hedges might be my "worst" buy of the day, using our COMC guide, as it's listed at only 31¢. But heck, I like it.

And we'll close today with some more San Diego goodness (I refuse to acknowledge the Padres traded away Eric Owens to the Marlins). For what it's worth, the Lamet ice is on COMC for $3.75, the Colin Rea "Missing Black Plate" $1.13, and the Owens 2001 Traded refractor at 85¢. Really though, that Eric Owens may have been my personal favorite pickup of the day, if we're judging by how high my eyebrows raised and my mouth smiled when I saw it. Always love stumbling upon a card I need from a somewhat obscure player I collect.

Still another post or two from my quarterbox haul to go. Thanks for sticking with me! Have a great weekend, everybody.
Posted by defgav at 4:37 PM