Rocktober continues with a post focusing on favorite song of mine when I was a kid.


This is a dumb/fun idea I had while lying in bed trying to fall asleep the other night: Putting together a bunch of cards to line up with Billy Joel's "We Didn't Start The Fire" (If someone out there already came up with the idea, I'm sorry for copying it). I just thought it'd be neat to put together a binder that you could look through while the song plays, with cards syncing up to the lyrics, so to speak. 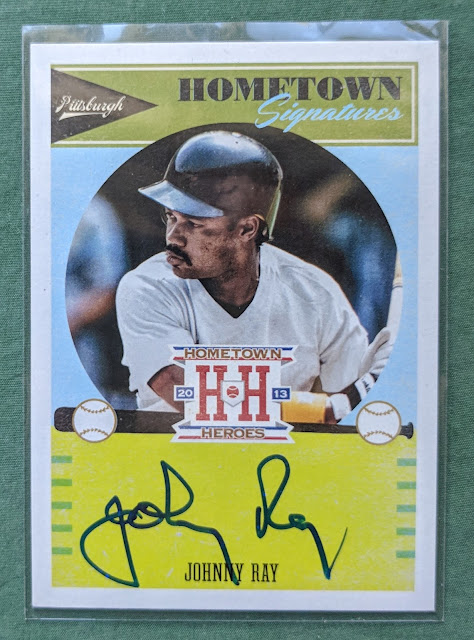 I bet most references in the song have some sort of cardboard representation, though I don't doubt there will be some tough ones to trip me up along the way. I'm going to allow myself to have fun with it and "cheat" a little. For example, I'll use a card of 80s Pirates second baseman Johnny Ray instead of a card of who Joel was actually referencing, 50s musician Johnnie Ray. I suppose I could resort to making customs if I absolutely can't find any applicable cards, but it'll be a last resort and considered only a temporary solution. But yeah, we'll just have to see how far along this project ends up going.

Hey, question for you...
Can anyone recommend a good online shop for cheap non-sport cards? Something like a Non-Sportlots. Because Sportlots and Just Commons don't seem to carry non-sport. COMC does, but their non-sport stuff tends to run a little pricey. And of course there's eBay, but shipping cost will usually get ya there.

So I'll likely end up relying a lot on helpful traders to fill spots in the binder. Please help me out if you can!

Here's a rundown thanks to Wikipedia...

Ok, yeah, there's gonna be some tough ones here, for sure. Looks like there will be 135 or so different cards needed. If I can get better than 50/50 with a real card to custom ratio, I'll be happy. ("Hypodermics on the shore"? What am I supposed to do with that?! Perhaps a hockey card of NHL player Nick Shore, I guess?)

Some low-hanging fruit already out of the way. These 4 are all mentioned by name in the song.

Again, if you can help me out with anything in trade, that'd be nice. Thanks for reading!
Posted by defgav at 4:00 PM

Email ThisBlogThis!Share to TwitterShare to FacebookShare to Pinterest
Labels: non-sports, We Didn't Start The Fire binder