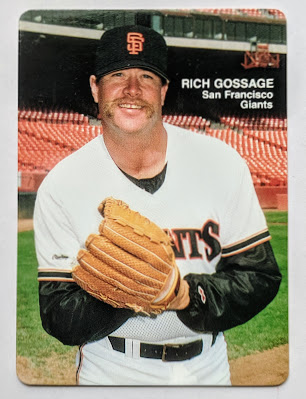 Seems 1989 Mother's Cookies Rich Gossage had been on my sidebar wantlist for about a year. I've got a solid Goose PC-- he's a main dude I collect thanks to him being a former Padre in the HOF-- and so I really wanted to add the only true card he ever got from his 31-game stint with the Giants. He had signed as a free agent on April 14, 1989 and was with San Francisco until the Yankees picked him up on waivers four months later. Technically, he also appears as a Giant on a 1990 Publications International Trivia sticker (which seems to be a good source for short-term stops, since that set also includes Kent Tekulve on the Reds, which I showed off the other day). And if you really want to split hairs, 2012 Playoff Prime Cuts includes some Gossage hits that list "San Francisco" as the team, but they are logoless cards and the striped pillbox hat in the photo is obviously a Pirates cap, so unless perhaps the jersey swatches are from a game-used SF uniform, doesn't make much sense considering them Giants cards.

So anyways, I really wanted to pick up this oddity but it eluded me for months, and apart from a Nick-to-Nick trade, no one on the cardsphere seemed to have one available. At the last card show I attended, there was a dealer who had a bunch of Mother's team sets displayed on his table and I was excited thinking I might have finally located it-- but no, it was one of the few sets he didn't have. But then recently a complete 1989 Mother's Cookies Giants team set popped up on eBay. It was a little more than I wanted to pay for just the Gossage, but not too bad and at least it included a few more cards for my consideration. 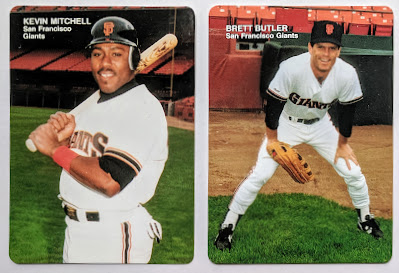 I kinda/sorta collect Kevin Mitchell and Brett Butler, so this pair are also keepers for me, but the below cards are up for trade.

This Will Clark was probably a hot card back in the day. Matt Williams was still shuffling between SF and AAA at the time, not breaking out until the following season. Coaches cards are a fun quirk of Mother's sets, with this one being highlighted by Dusty Baker. 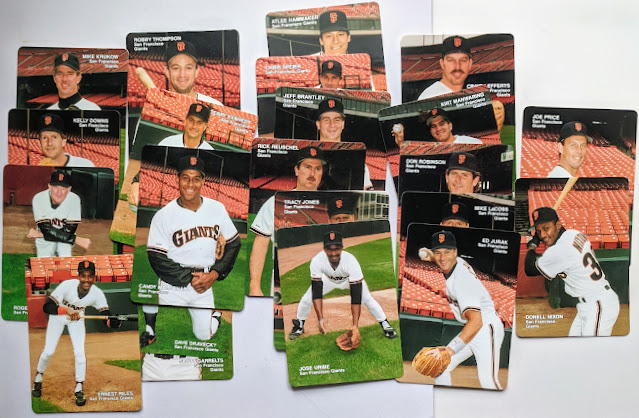 And the rest of the squad that would go on to win the NL pennant that year before falling to the A's in the earthquake-rattled bay area World Series.

I was lucky enough to have Mother's Cookies around when I was a kid. The cookies themselves weren't amazing, but just-ok cookies are better than no cookies. And it was cool when they occasionally put out cards, usually of West Coast teams, with those glossy fronts, rounded corners, and complete lack of design apart from a little text. I believe most of their team sets were stadium giveaways, but sometimes cards were included in cookie packages, like when they made Griffey and Nolan Ryan cards.

That's all for today. Thanks for reading.
Posted by defgav at 4:13 PM