My experiment into the effect of the word "cardboard" in a post title increasing views faces its toughest challenge with today's Guys From Granite post. Understandably, showing off cards of little-known players who went to my high school doesn't typically generate much traffic, but I still feel obligated to post about notable pickups for this minicollection of mine. I'll be interested if this post fares better than expected.

Putting "cardboard" in the title might be a stretch since technically this first one is metal... 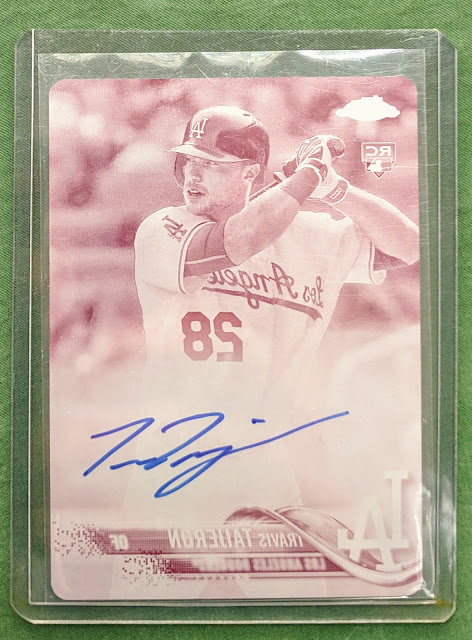 Leading off the three cards featured here today is an autographed magenta printing plate of Travis Taijeron. My quest for the master rainbow of this card is now down to just 3 cards: two printing plates (black and cyan, the best ones) and a red refractor (#/5, non-wave).

Quick recap on Travis: His last name is pronounced "Tyrone". He was drafted by the Mets back in 2011. Finally got a cup of coffee in NYC in 2017. Spent 2018 with the Dodgers' Triple A squad. Not counting a 2017 Topps Now card, he finally got a true rookie card in the form of an auto in 2018 Topps Chrome Update (no base card, just the auto and all the parallels that come with it).

This year sees Travis back in the Mets organization, transitioning from the outfield to first base with Syracuse. He got off to a hot start and was named week-one Mets Minor League Hitter of the Week. He's cooled down a bit since, with his batting average around the Mendoza Line now, but his 8 dingers lead the club. 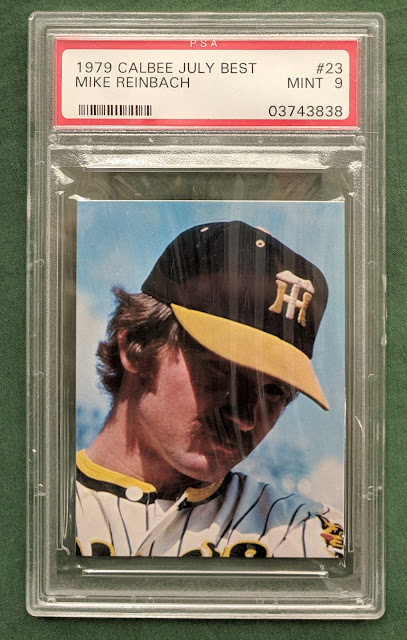 This next pickup is the first graded card for my Mike Reinbach PC. I think it's my first graded Japanese card, too. I already had a decent raw copy of this card, but it wasn't as nice as this one, and it was a solid deal, so I pulled the trigger on the upgrade. The warped penny sleeve PSA used detracts from the appearance, so I'm a little tempted to break it out, but I probably won't, at least not anytime soon. (I hear they charge $5 for a simple re-slabbing-- like if the case gets cracked or something, PSA will put the card in a new case for $5-- so maybe someday I'll pay to get re-slabbed.) I just kinda like the novelty of having a graded Reinbach. Haven't seen one before this popped up. 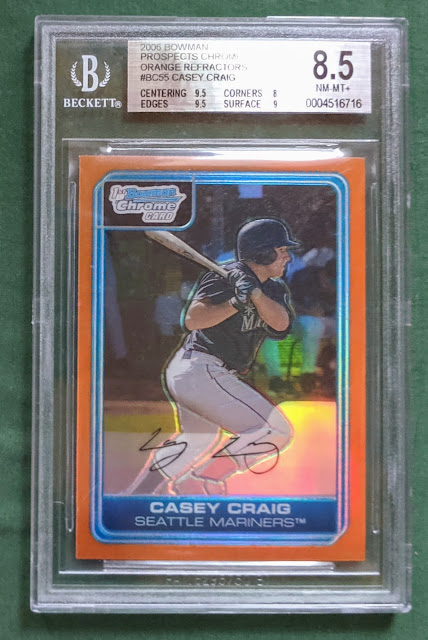 Casey Craig topped out at AA, but thanks to being included in 2006 Bowman and Bowman Chrome, he's got plenty of parallels out there for me to hunt down. This orange refractor #'d 9/25 is the lowest-numbered card in the li'l PC now-- and also my first graded card of his, not that that means much to me. I have no delusions of going after a master rainbow for this one since I was so late to the game-- didn't start collecting him until 2014-- but I'll snag parallels I need if the price is right.

Chrome cards are really closer to plastic than cardboard, so other than the Reinbach (which is trapped in a plastic slab), this post was more like Hometown Metal and Plastic Additions, but close enough! I'll do a recap post later in the week taking a look to see if page hits have seen a rise thanks to "cardboard" post titles.
Posted by defgav at 3:27 PM