pot·pour·ri
/ˌpōpəˈrē/
noun
a mixture of dried petals and spices placed in a bowl or small sack to perfume clothing or a room.
a mixture of things, especially a musical or literary medley.
a Jeopardy category of miscellaneous crap.

Here are a few half-baked ideas not worth their own post.

First off, my previous post recapping my beach weekend was the 1500th post here at Baseball Card Breakdown and I totally missed that until after the fact. That's a pretty legit number for a card blog! I might not post quite as frequently as I once did-- these days I shoot for every other day, whereas in the past, daily posting was the goal-- but I'm still having fun and don't plan to stop anytime soon.

I don't think I'll run a contest to honor the milestone, but my 6 year blogoversary is coming up next month, so perhaps I'll work up something special for that.

I was planning on going to the the monthly card show this weekend-- even wore a Topps shirt to work the Friday before, as is my tradition-- but whoops, I ended up winning a string of eBay auctions this evening that added up to more than I was expecting to pay. I put "blaster+tax" bids on 14 items ("no name" guys from a parallel set I'm working on), expecting to win a few for around $5 each-- maybe a couple near my max bid-- but no, ended up winning a dozen for about a blaster each. OUCH! That adds up. So yeah, that's a lot of cash and so I shouldn't turn around and drop more $$ at the card show. If I have to defend myself, I did get another bonus at work the other day, so I can just consider them a gift to myself with my Q1 bonus money. Expect a post on those cards in a week or two. (And to the other bidder out there putting in a bunch of $20.20 bids, coming in second and costing me a lot of money: I hate you. I know all's fair in eBay bidding, but damn-- You suck! Without that one other dude causing problems for me, I would have gotten away just fine. Damn.)

These days, my post view counts typically level off a little over 100 views after a couple/few days. It's down a bit from peak performance 2 or 3 years ago, but I'm not too upset over it.

Seems nearly 600 readers were interested in checking out the cards Kerry hooked me up with a couple weeks ago (Kerry on my Cardboard Blog). That's quite the spike for me! But I remember years ago Night Owl mentioning that posts titled with the word "cardboard" in them typically saw a surge in viewership for some unknown reason. Well shit, maybe we should just shoehorn "cardboard" into every post title then! He might abbreviate Cardboard Appreciation posts as "C.A." to avoid this outlier situation, but I'm leaning into it with this Cardboard Potpourri post and will be curious if the hits are up with this one, too-- even if there's a good chance any spike in views is bot-related, not actual human clicks. 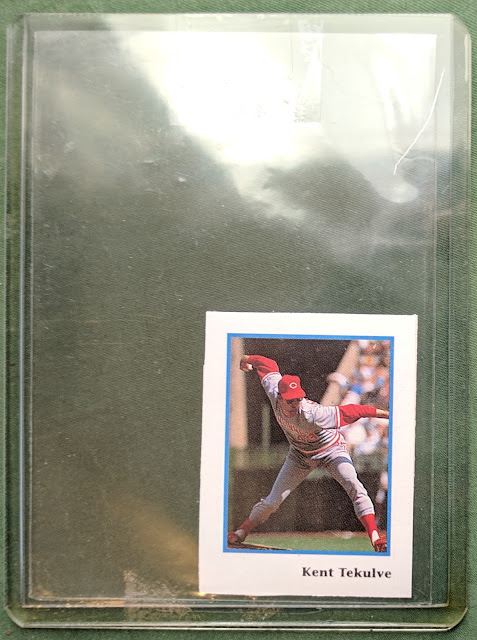 In my Kent Tekulve PC post from a few weeks back, I mentioned the only other Reds card I needed of him was an oddball sticker. (If you want to be picky about it, I also need the Tiffany version of his '89 Topps Traded card, and I assume he probably has a few "Rediscover Topps" stamped buybacks of his '89 Topps Traded card out there now, but you can't really count such gimmicks for a standard, blue-collar PC.)

I ended up buying this tiny fella off Sportlots. It was like a buck and a little shipping.. not a big deal. But damn it, such a pain trying to pay for it. Stuff like this is why I hate Sportlots. I couldn't figure out how to complete my purchase! In my fruitless efforts, I somehow ended up accidentally requesting a check be sent to me for a little over a dollar. I was very confused and frustrated.

Turns out-- remember a few months ago when that basketball card with the Menendez Brothers in the background was suddenly super popular?-- Well, I had bought one for something like 18¢ and $2.99 shipping. But the asshole seller, realizing the surge in value, nixed the sale and said *shrug* the card went missing. And so I ended up with about $3 credit in my Sportlots account over the refunded order. So when I bought the Teke weeks later, the money automatically came out of there (unbeknownst to me), and I somehow requested a check for a buck with the remainder while trying to figure out how to pay because the site is terrible and left that whole situation very unclear. I feel bad they had to waste a 50¢ stamp sending me a check for a freakin' buck (not to mention the chore for me to cash/deposit it), but there was no way to cancel it without contacting customer support, which in my experience with the site hasn't been great. COMC may be more expensive, but with how often I run into issues with Sportlots transactions (it's seriously about 50/50), I'm totally willing to pay more for no headaches.

But anyways, that's just some ranting getting in the way of a cool Teke oddball I picked up.

Took a while to sort out, but my 1978 Topps wantlist is now live-- er, back and improved! I'm at just about 80% complete and would love to polish this one off by the end of the year. LINK TO MY NEEDS SPREADSHEET 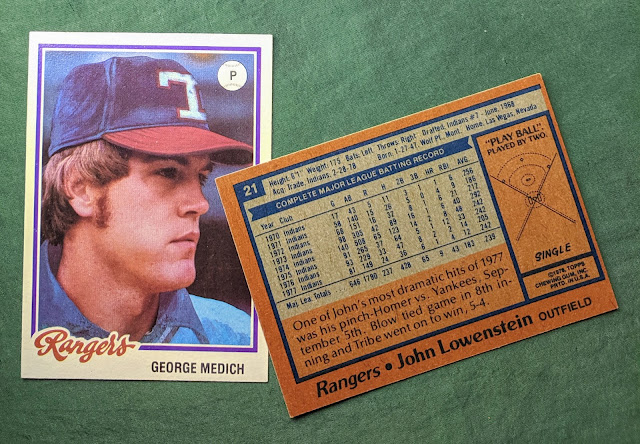 In my sorting, I found a couple Burger King cards mixed in causing trouble. Unfortunately there's not a good way to identify them other than their card numbers not matching up with the standard '78 Topps checklist. (Couldn't they have just slapped a Burger King logo over the stupid "Play Ball" game on the back that kids never played?!) Maybe after I complete the regulation 1978 Topps set, I might try to supplement it with the four regional BK team sets (Yankees, Rangers, Astos, Tigers), but that's definitely not a priority right now. 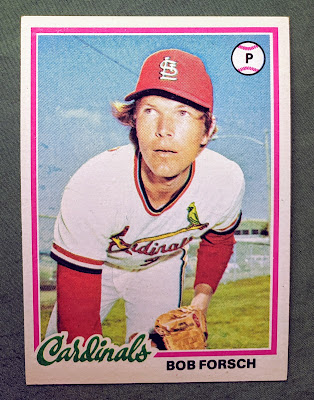 While sorting, I had a couple "wait, is this a printing flaw? Do I need an upgrade?" moments. Like this this Bob Forsch-- the stuff at the far left center is some printing flaw mess that doesn't bother me too much, but what about those lines around his head? A COMC search reveals that all copies of this card have those marks. So this one's good. 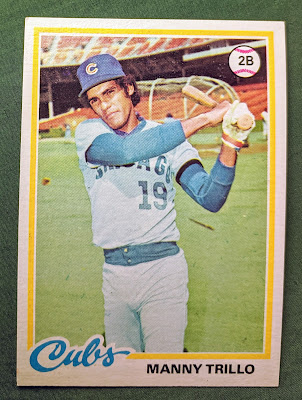 Howabout this Manny Trillo? Looks like maybe some stray marks in the background behind him? But nope, again, all copies have that stuff. I'd have to guess it's a glove on the left and maybe a bat on the right, but I'm not confident about either.

Another card along these lines is the '79 Topps Dusty Baker that appears to have a printing flaw across his chest, but it's present on all copies of the card. I ended up asking for an upgrade of this card, and when I received one (from Night Owl, I believe) I realized, whoops, they're all like that.


Somehow it seems terribly unfair that Oliver Perez has now pitched in 619 major league games, while you and I never got to pitch in any.
— Bill James Online (@billjamesonline) May 11, 2019


Wow, I still think of Oliver Perez as the promising rookie getting called up for the Padres in 2002. Crazy that while he never quite became a star, he's managed to stick around for so long. (Bonus points for 619 being the main area code for San Diego.)


OK, that's all the potpourri I've got for today. Thanks as always for reading. Hope you have a great Mother's Day weekend.
Posted by defgav at 10:04 PM