How I spent my eBay bucks: Reggie and Ozzie

I had a lot of eBay Bucks waiting for me in April after splurging in the first quarter of 2019, with the certified Roberto Clemente autograph being the biggest one. In case you're not aware, eBay Bucks is a promotional program on the auction site where you opt in to earn a percentage (usually 1%, but sometimes there are limited time offers for a larger percentage) and they add up, then at the end of each quarter they give you the "store credit" to use within a month.

April started slowly for me, without much catching my eye to throw my credit on-- almost got a little worried for a while there-- but I eventually found enough cards to spend my Bucks on (and then some). So get ready for a string of posts featuring my eBay Bucks-aided pickups. 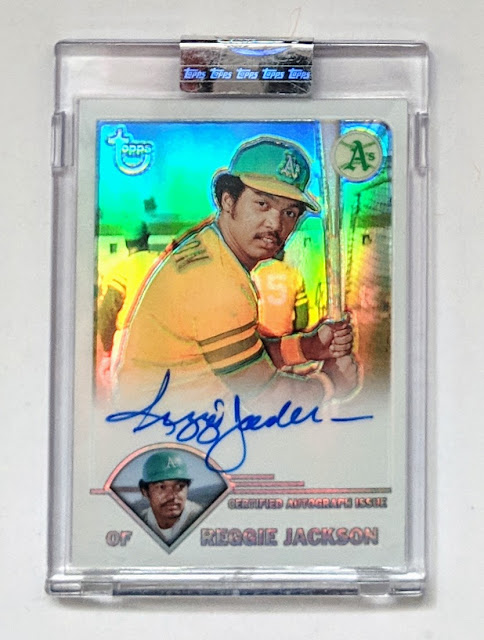 Isn't this a pretty Reggie!?! It wasn't long ago I picked up the base version of this 2003 Topps Retired Reggie Jackson auto. But I had a longing for the refractor parallel. This one popped up at auction for a low opening bid and the thing where you can make an offer. I made a competitive offer-- it didn't get accepted-- after an hour or so, somebody else made a low bid and the "best offer" was negated. But joke's on the seller, as after the weeklong auction ended, I was the top bidder, and the winning bid was significantly less than the "best offer" I made back when the listing was new. Works for me! 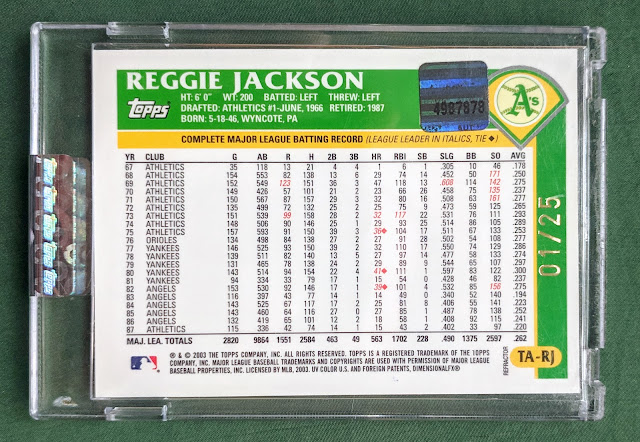 As I've mentioned before, Reggie was my #1 guy to collect as a kid in the early 90s-- big personality, Naked Gun, legendary dude. Fun to get a new "best card" of him in my collection. 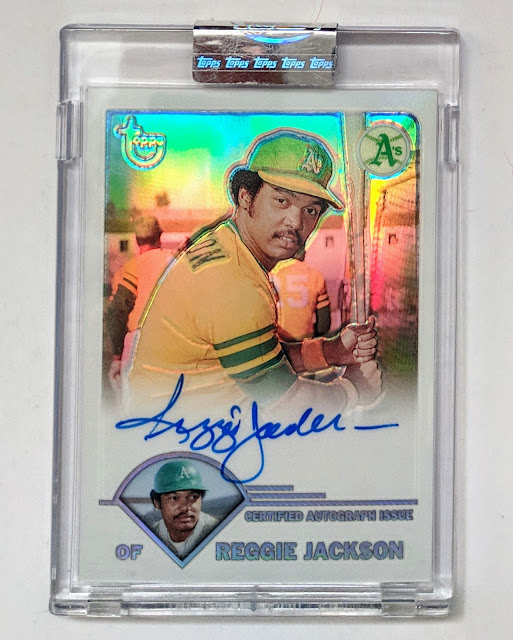 Here's an alternate pic of the refraction.. a bit more of a "sunset" feel (more red spectrum). Ozzie Smith! This 2005 Topp Retired card is my first Padres autograph of him. It's an unnumbered base auto, but the print run on his "group" was only 70, I believe. Didn't cost me much over the price of a blaster. Would love to score a refractor version some day, but this is fine for now. (The other Ozzie auto in my collection is his 2004 Retired refractor.) 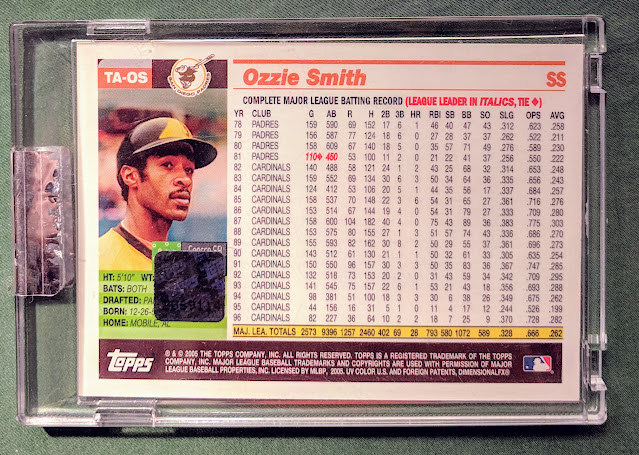 The seller had a few other Retired autos up for auction. I bid on some but ended up being the second-highest bidder on the rest. Oh well-- this was the one I really wanted.

That's all for this post, but I'll show off more of my April eBay pickups soon.

Have a great weekend, everybody.
Posted by defgav at 3:59 PM