Hey, here are a bunch of cool cards that I've received over the past couple weeks from friendly collector folk. 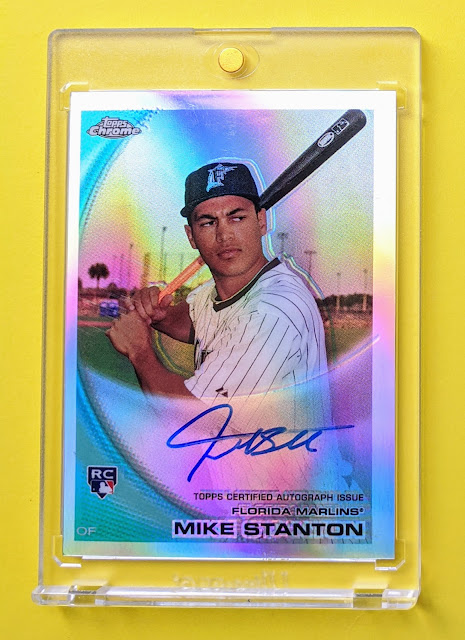 Holy heck, check this out! Giancarlo Stanton 2010 Topps Chrome rookie refractor autograph! It may be off-center and have some surface scratches, but still a "big card" and not the caliber of card that typically shows up in your mailbox without some wheeling and dealing beforehand.

But yeah, the incredible Matthew Scott has been working on his big, mostly-Pirates collection and decided Giancarlo didn't really have a place. He asked if I was still collecting him. Yep! Maybe not with as much fervor since his trade to the Yankees, but still definitely a guy I collect. And this rookie auto is a nice crown jewel for my Stanton PC. 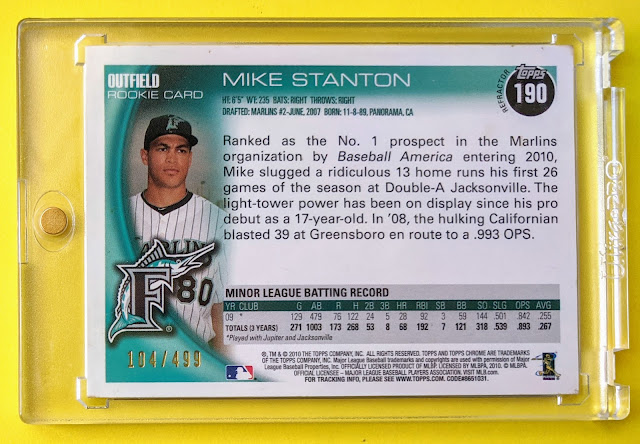 Numbered 104/499. Sweet! While I'm not rooting for the Yankees, generally speaking, I do hope Stanton has himself a great comeback season.


And if that RC auto wasn't a big enough boom on its own, along with it was this.. 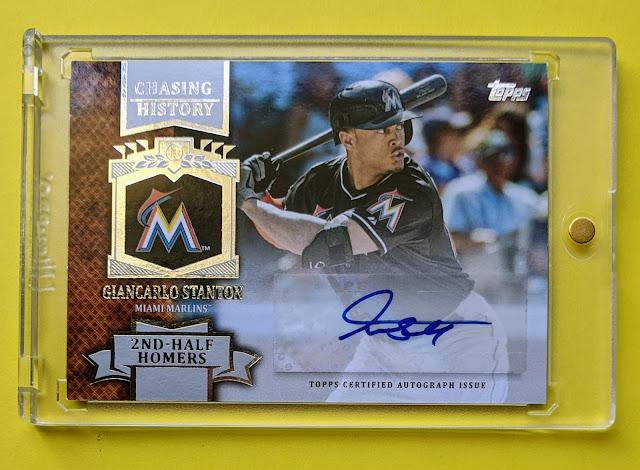 Wow! This 2013 Topps "Chasing History" auto ain't nothing to sneeze at either! The number of Giancarlo Stanton autographs in my collection tripled thanks to this mailing.

Bob Walk the Plank is still on hiatus for the most part, so you guys didn't get to see all the neat Pirates I mailed him a while back unless maybe you caught some highlights on Twitter. But yeah, I always try to sniff out good Pirates cards for Matt (and some left over for my other Bucco trader buds), and will hope to gather more for him before too long. Huge thanks again, Matt! 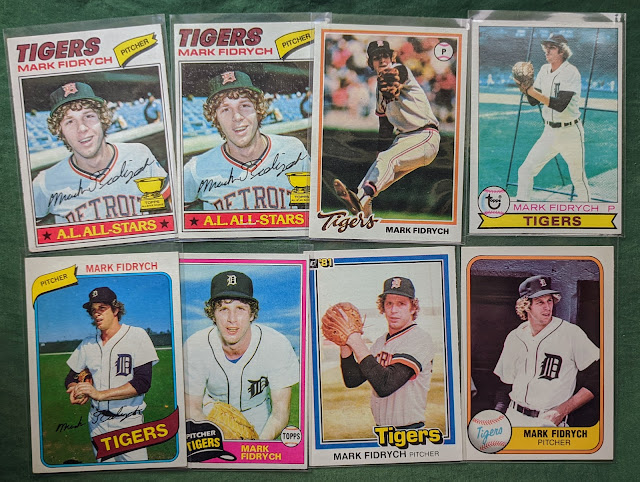 Friend o' the blog Alex T. and I have been back to our routine where I help him out with some custom card projects and he returns the favor with cards. Here's a nice run from Mark Fidrych's playing days, including a pair of rookies. 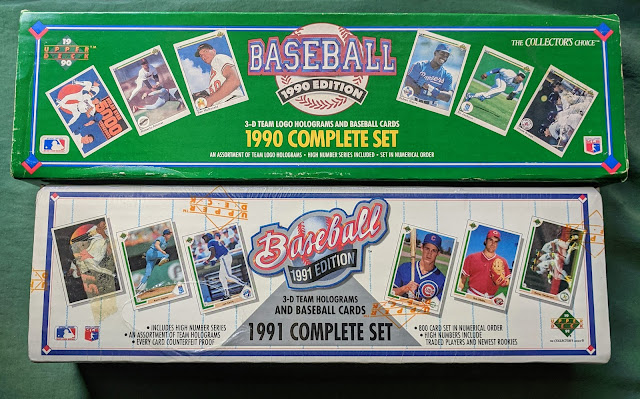 And a couple Upper Deck factory sets! I already got '91 UD just a couple months ago from The Diamond King, but Alex had the '90 set I needed plus a '91 he didn't need and since there was room in the flat-rate box, he offered to throw it in for the heck of it. If anyone needs it, I'd be willing to sell it for just a smidge above the postage cost (or a trade equivalent). Otherwise maybe I'll open up the wrap and raid it for my many PCs; there are probably a few that are lacking '91 UD cards, believe it or not. But yeah, I'm excited about the 1990 set. I ripped a fair amount of that in my first year as a collector, but never came anywhere near completing it. I really need to thumb through this set sometime soon and let the familiar cards take me back to those days. 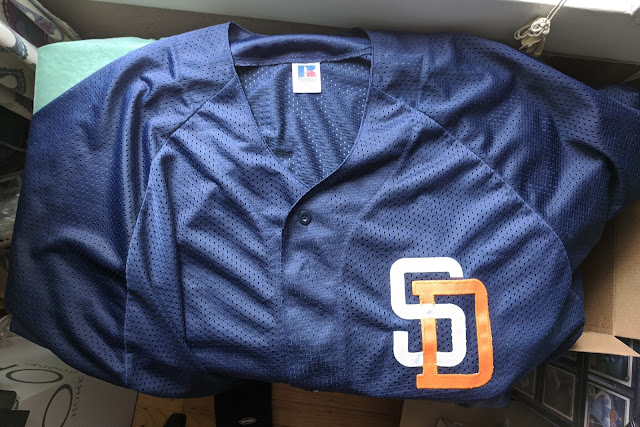 Alex surprised me with this Padres batting practice jersey. There's no name on the back, and he says it's unlikely to be player-worn (sorry I'm too lazy to relay the full background story he shared), but still cool. Size XL, it's too big for me, but if/when the Padres win the World Series, I might have to don this anyways. (I'll probably have filled out enough to fit into it by then, lol.) 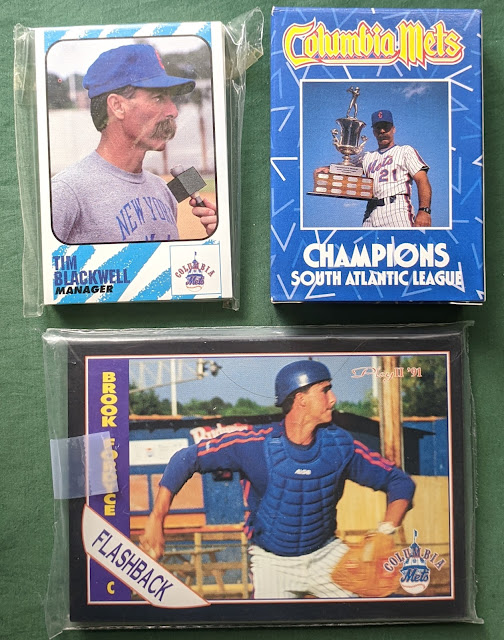 Alex's collection has a focus on minor league cards. He knows I collect Tim Blackwell and so he hooked me up with some team sets featuring that marvelous mustache. Even if I already have some of these singles, it's pretty cool to have the full team sets, too. 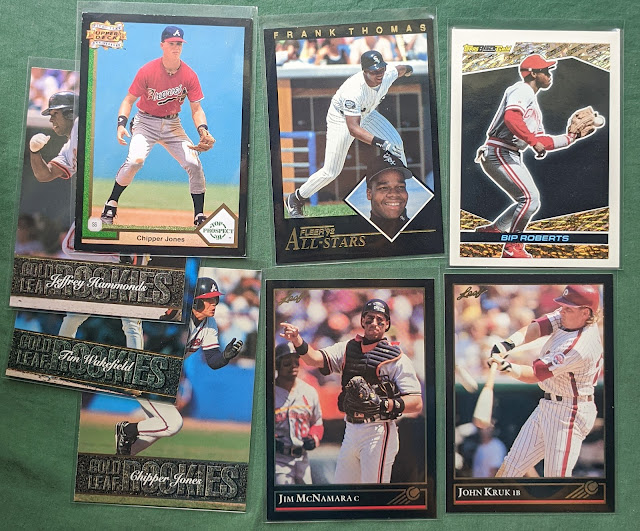 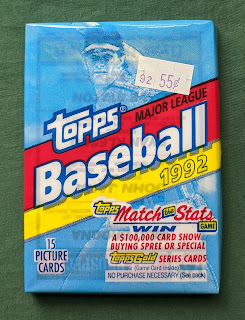 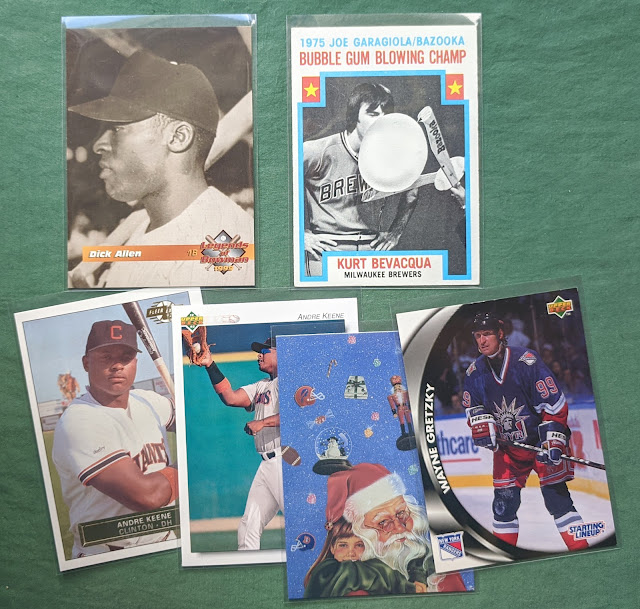 Some more cards highlighted by a Dick Allen oddball I needed and the classic Bevacqua bubble card from 1976 Topps. 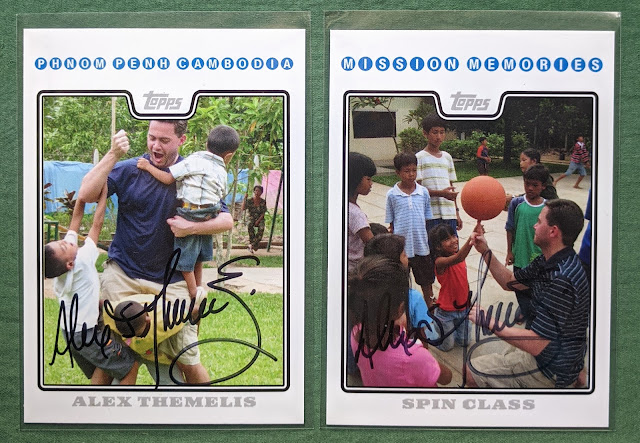 Alex was downright apologetic for including these customs he had made through a Topps promotion a few years back, but I think they're awesome. I already have a little minicollection of bloggers' cards going, so it's easy to stretch that into including blog-readers' cards too. Made sure to get his approval before posting them for privacy concerns.

Then if all that wasn't enough for the little project he had me working on (several copies of a custom minor league card for a friend of his), he sent a nice PWE on top of it shortly thereafter... 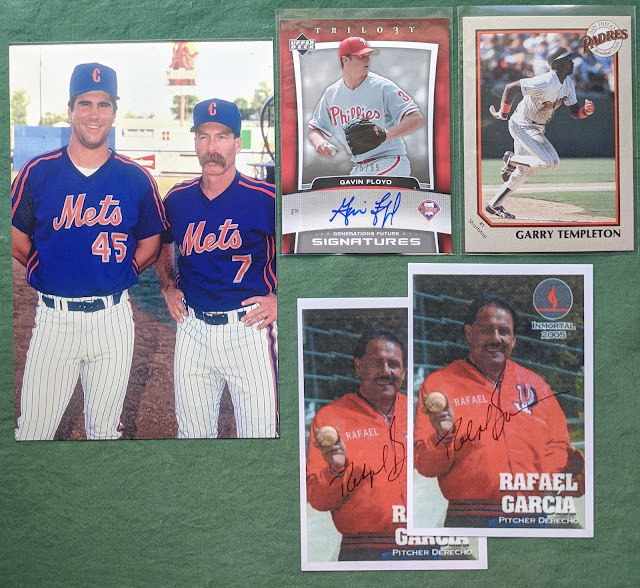 Another oddity for my Tim Blackwell PC, a Floyd auto I didn't have, a Templeton oddball I needed, and a pair of Rafael Garcia signed oddballs sponsored by Carta Blanca, a mexican beer (one of which intended for Rod if he has any interest). Also known as Ralph Garcia, he pitched in a few games for the Padres in the early 70s and is in the Mexican Baseball Hall of Fame.

Thanks, Alex! Good stuff! I'll drop your customs in the mail by the end of the week. 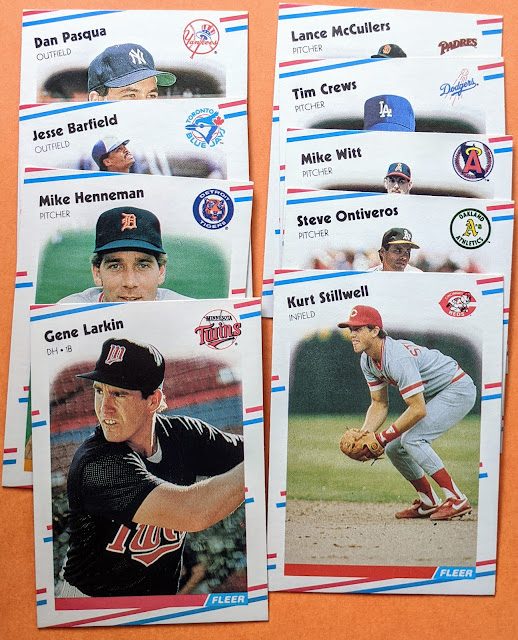 Here's another PWE full of '88 Fleer needs from reader David G., our third light swap along these lines. A cool thing about getting cards from David is he uses magazine cologne ads to wrap them in, so the cards come out smelling lovely and you get a bonus air freshener! Thanks, David! I'll send you back some Cardinals soon. 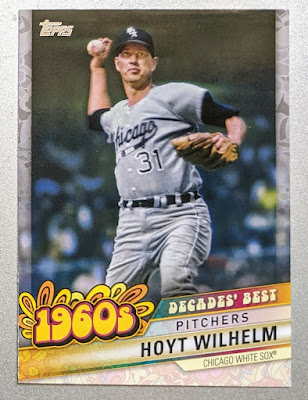 And here's the last one for today. It's a package from Bob at the Best Bubble. 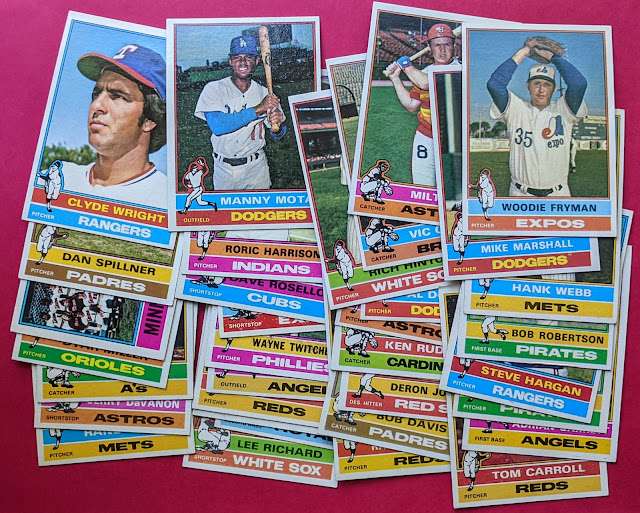 Big lot of pack-fresh 1976 Topps! These needs take me up to 36% complete with the set. Funny thing, these cards are all found around the back end of the set. So if you look at my '76 Topps wantlist, you'll see my haves are pretty sparse at first, but I'm in better shape once you hit #400. 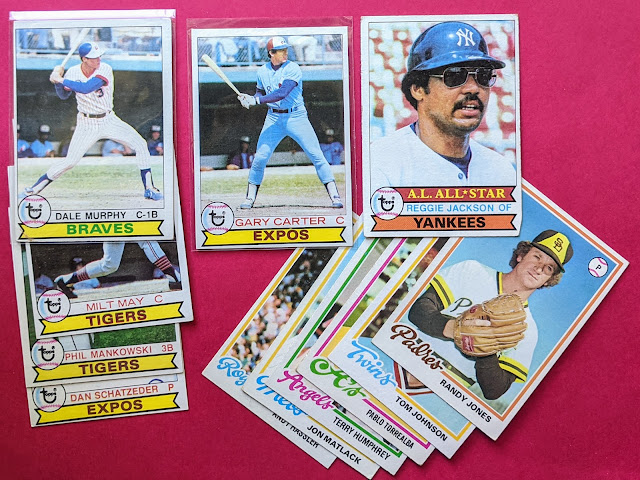 And still a ways to go with '78 Topps, but those few needs take me past 81% complete. Not too bad. 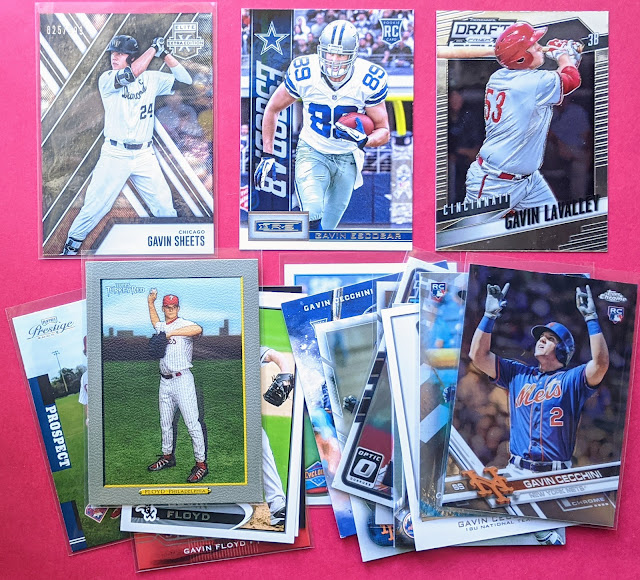 I've already got most of these Gavins, but at least a couple I didn't have. I just looked into what Gavin Cecchini is up to these days. He had gone to spring training with the Arizona Diamondbacks on a minor league deal, but they released him a month or so ago. And before that he had moved to Australia to play baseball there, but then fled the country after the crazy brushfires decimated much of the continent. Not sure what's next for him, but wish him the best of luck. 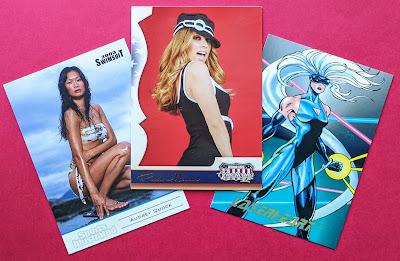 Finally, Bob threw in a few ladies on cardboard. Always a nice touch.

Thanks, Bob! I'll try to round up a return package for you soon, but you might need to have some patience... 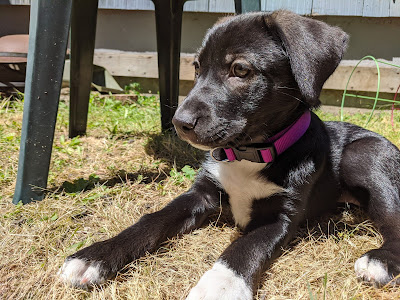 Gonna be a busy rest of July for me. Between the usual work craziness, and now trying to raise a tiny puppy who needs constant supervision, and plus my close friend from way back is going to be in town staying with us next week. So it'll likely be a while till I'm able to spend much quality time with cards.

Oh, I also got a nice box of cards dropped on my doorstep last week by Padrographs Rod, but this post is already pretty long, and I still need to sort that stuff out a bit, so I'll save that for another day.

Thanks for reading!
Posted by defgav at 1:11 PM