not to oversell it, but here's MY NEW BEST CARD!

You're not going to believe it, but I voluntarily skipped the monthly card show that was this weekend. It wasn't an easy choice, but I feel a little buried under cards at the moment thanks to some large trades I need to sort out, and my recently-ripped two 2018 Archives hobby boxes, which I'll post about soon. I also figured I'd give my wallet a rest after my all-time most expensive pickup, which I'm posting about here now.

I gotta give a shoutout to Alex T. again, the reader who traded me the Brett & Yount rookies and gave me a heads up about the sweet All-Time Carolina League set. I expressed interest in hearing more about Alex's collection of minor league sets. In his own words:


I could most likely go on for days about sets in my collection, but I don't want to wear out my welcome, so I'll TRY to keep this short and say that a set that is easily one of my favorites is the 1976 Tulsa Oilers.
The set was team issued and sponsored by a company called Goof's Pants (which adds to the awesomeness of the set!) and the GM of the team had the incredible idea to have two individuals who appeared in the set autograph their cards.
The first was Paul 'Daffy' Dean who pitched in the 1930s for the St. Louis Cardinals (his brother is Dizzy Dean). He was working with the Oilers as their director of baseball camps.
The second individual was an occasional coach during the season and is the real reason this set is so highly sought after - Negro League legend and HOFer Satchel Paige.

Wow! I had never heard of this before, but the Satchel auto immediately jumped to the top of my mental White Whale list. The man was a true legend. And this set is a precursor to the "pack-certified autograph," including autographed cards in the original set release. The team advertised the set in hobby publications at the time. 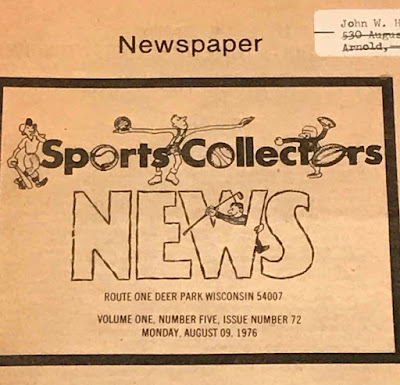 Alex was kind enough to share with me these couple pictures from a Sports Collectors News issue from the time that he was lucky enough to receive with his purchase of the '76 Tulsa set. 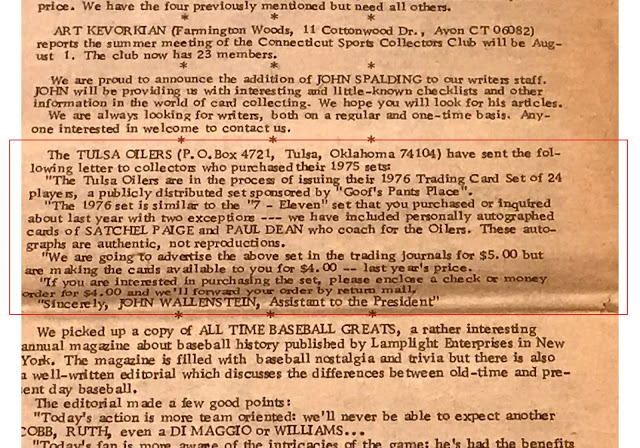 I happened to find a Beckett-slabbed Satchel Paige auto on eBay with a reasonable opening bid. And a few tense days later, I ended up the winning bidder. 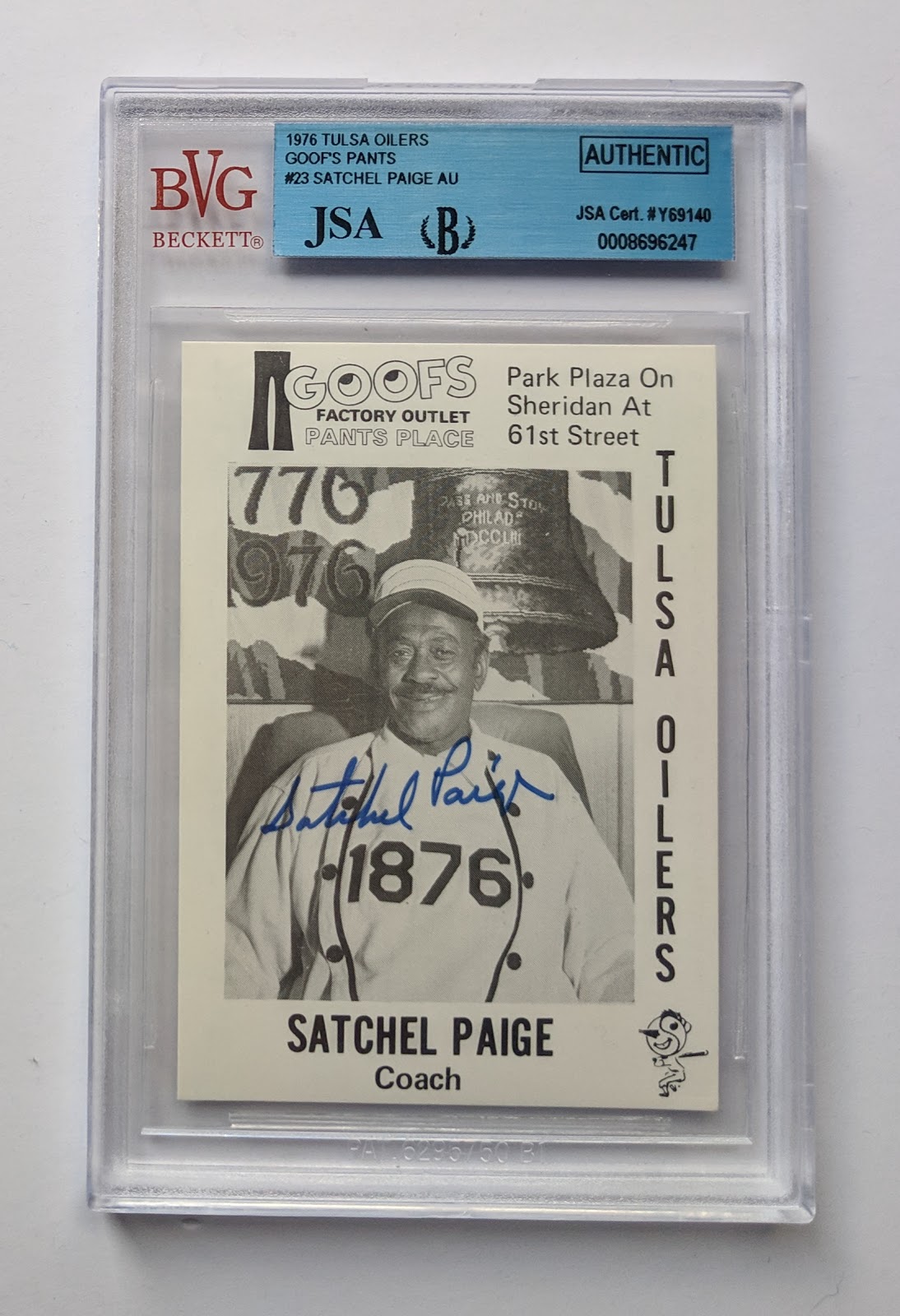 Boom! Love it! Old-school minor league baseball cards at their finest! And it's signed by Satchel Fucking Paige!!! So great they had the foresight to use nice wide blue pens, too (as opposed to a ballpoint pen). Still looks great 40+ years later. I've seen other copies out there where the auto has faded (perhaps displayed in a sunny spot for a long time?) but this one is still nice and bold. 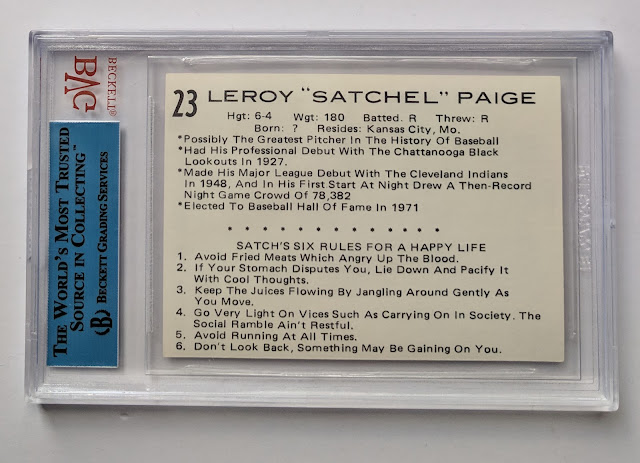 If the front wasn't awesome enough, the back is also outstanding. It's got Paige's vitals (note the birthdate, or lack thereof), some career highlights, and best of all:

Satch's Six Rules For A Happy Life.
1. Avoid fried meats, which angry up the blood.
2. If your stomach disputes you, lie down and pacify it with cool thoughts.
3. Keep the juices flowing by jangling around gently as you move.
4. Go very light on vices such as carrying on in society. The social ramble ain't restful.
5. Avoid running at all times.
6. Don't look back, something may be gaining on you.

LOL, these are great! I don't exactly abide by these rules (heck, I just had fried chicken for lunch today, and I jog [briefly] almost daily), but still good to consult from time to time. 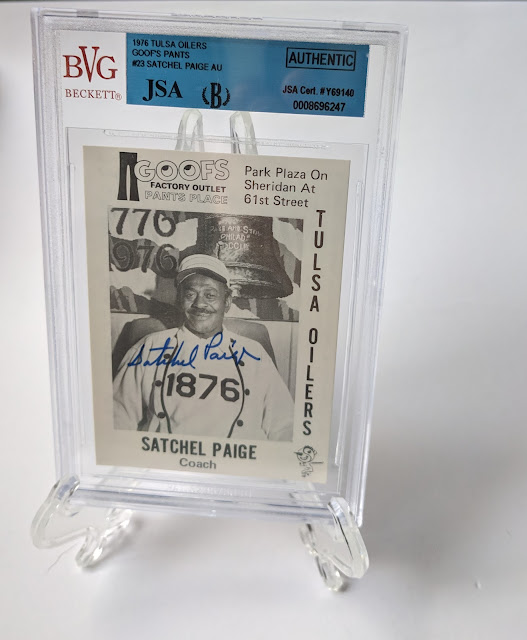 Such a great card! It wasn't cheap (again, I believe this was my all-time most expensive single card purchase), but no regrets here. Happy to have this as a cornerstone of my collection. I hope to eventually hunt down the rest of the set, including the Daffy Dean auto. The set also includes the first card of a guy I collect, Garry Templeton, so that would be sweet to add to the PC.

This Satchel auto pairs well with the 1953 Topps card of his I recently showed off. 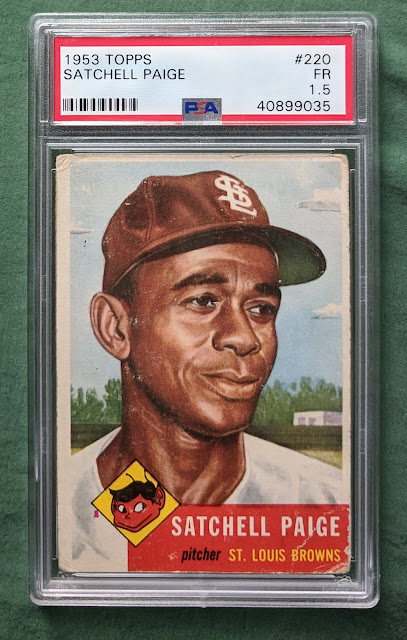 That's a beauty! Truthfully, I bought the '76 auto first, and not long after, was compelled to complement it with the '53. Maybe someday I'll score his '49 Bowman rookie card to complete the trilogy of awesome Satchel Paige cards, but that one is quite expensive, so I won't be targeting it any time soon. 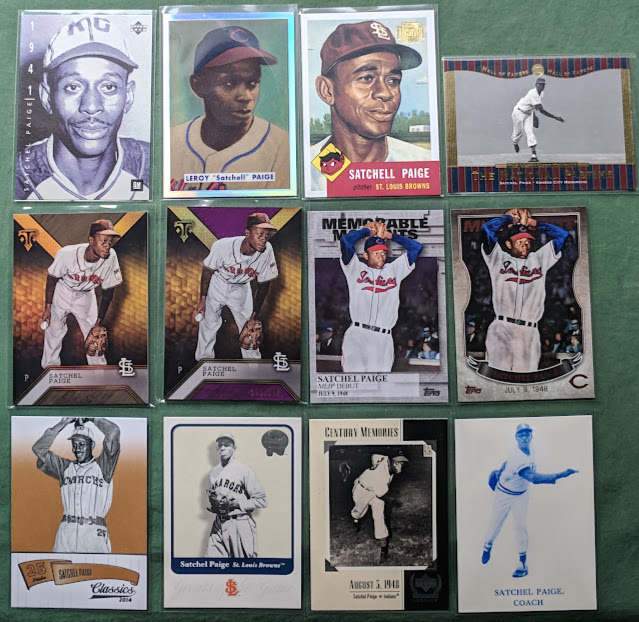 Here is the rest of my Satchel PC. The coach card in the lower right is a custom I just whipped up, sourced from a 1973 Tulsa Oilers program, which I believe was his first year working with the team.

I'd be down for trading for any Satchel Paige cards I'm missing (the older, the better). Anyways, I'm very happy with my little PC of the legendary Satchel Paige!