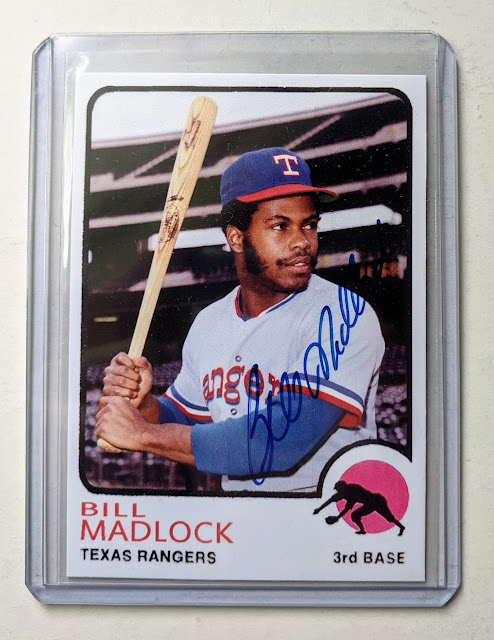 This custom card has a lot going for it for me to love. 1973 Topps is probably my favorite flagship set. And I love seldom-documented-on-cardboard "short-term stops" cards with the guy in an unfamiliar uniform like this. And Bill Madlock was among the few guys I got an in-person autograph from when I was a kid. Pretty sure it was at my first-ever card show, circa 1991 or 1992.. possibly the first autograph I ever got.

Tangent..
Ok, let me take a moment to try to think about the timeline of the 4 autographs I got in person as a kid.
Autograph #1 - Card show circa 1991. Must have been late '91 because I went with my mom and her boyfriend at the time. He bought a team bag of a dozen or so '80s Reggie Jackson cards that he later gave to me as a Christmas or birthday present-- which is why the show must've been later in the year.. a month or two later, I think. I want to say Bill Madlock was a guest signer and this is where I got his autograph (on a piece of paper). It was a big card show.. can't recall where, but perhaps the San Diego Convention Center? I remember it was huge and I was overwhelmed. Can't recall if I bought anything for myself that day (so if I did, must not have been anything too notable).. only remember the Reggies I was gifted later, with his '83 Diamond King visible on top.
Autograph #2 - Spring training in Yuma, March or April 1992.. I think. Need to check my photo albums to confirm I went to Arizona in '92. We caught one spring training baseball game on our way from San Diego to Tucson. Only signature I was able to get this day was an unknown old coach with the Indians who is still a mystery to me to this day, but maybe one day I'll crack it. I also saw Randy Jones and Robbie Beckett signing autographs, but didn't get to them.
Autograph #3 - '92 All-Star FanFest, July 1992. Googling tells me this event took place July 10-14, 1992 at the San Diego Convention Center. I think I went to this with my grampa. Don't remember much about it other than it being a lot of fun (and exhausting). I got Dick Allen's autograph on a baseball. For a while, I was thinking perhaps I got Dick Allen and Bill Madlock's autographs on the same day, but thinking about it more, if that were the case I would have most likely gotten Madlock's signature on the same baseball I was carrying around with me rather than a dumb piece of paper. (The fact that Dick Allen and Bill Madlock aren't exactly connected in any way probably wouldn't have bothered me.) So now I'm thinking Madlock was at the earlier card show.
Yeah, ok, I think that's the timeline. But maybe I'm wrong! Kinda wished I kept more of a diary/journal back then.
Oh, and Autograph #4 was Dan Walters at a card show sometime in the summer of '92, probably a few weeks after the All-Star Game. But wait a minute.. I just posted a couple months ago saying it was "The story of my first in-person autograph". This just shows how blurred my memory is of these events and anything I say about specifics of my original stint as an active card collector in 1990-1993 is to be taken with a grain of salt. LOL

But anyways, yes, Bill Madlock very well may have been the first autograph I ever got. One of the first, at least. 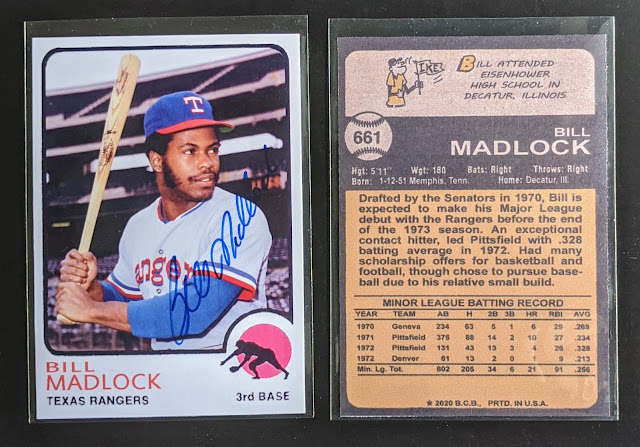 And as I say, 1973 Topps is probably my all-time favorite set, so I was happy to squeeze Madlock into the set via custom even though his first baseball card wasn't until a 4-player rookie in 1974 Topps, airbrushed into a Cubs cap. I get a kick out of seeing players I like in unfamiliar uniforms, so I get downright giddy seeing Bill Madlock as a Texas Ranger.. quite the rarity with only a couple '93 oddballs featuring him during his brief stint as a rookie in Arlington. I had years earlier made a similar custom, but then I found this other picture that I like a little more.

Mr. Madlock was asking a $15 fee for signing custom cards ($10 for real cards) via a limited-time offer on Twitter. Not to look a gift horse in the mouth, but his certified autographs can often be bought cheaper than that, so if I'm going to pay $15, it's gotta mean something to me. And I'm happy with my choice on the '73 Rangers custom here. Looks great! 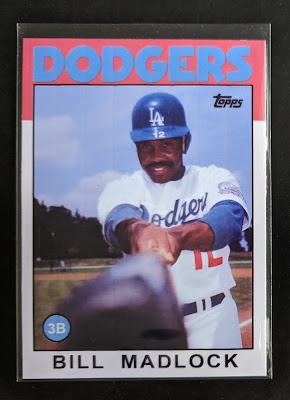 I also printed out this 1986 Topps "box bottom" custom I made some weeks back, though ultimately decided against sending it to him to get signed. Perhaps if his fee was cheaper and/or my printer did a better job with it, I would have tried getting a signature on this one as well. But still a unique addition to the PC as-is.

And hey, we just brought another unique addition home today. 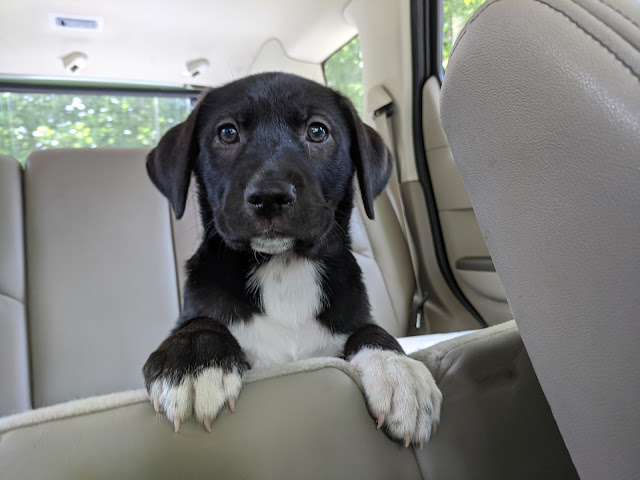 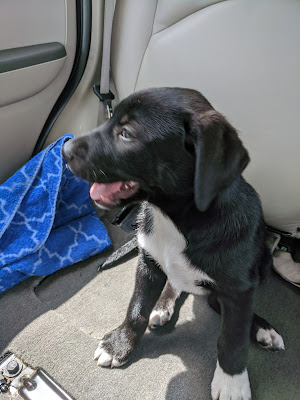 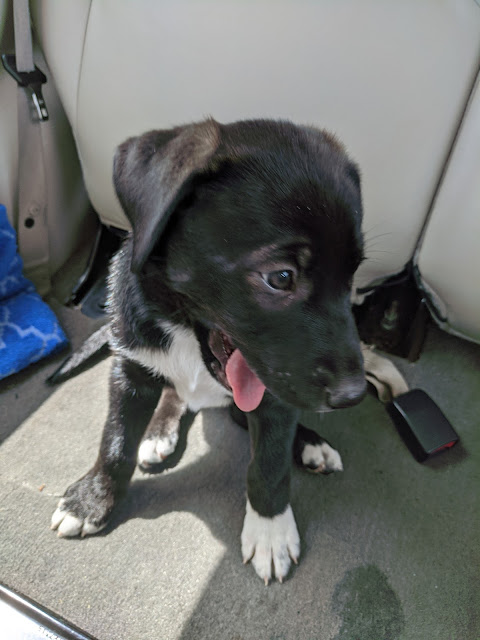 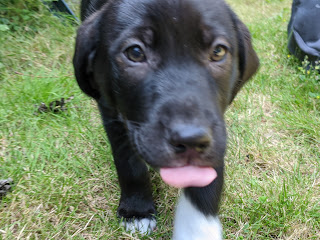 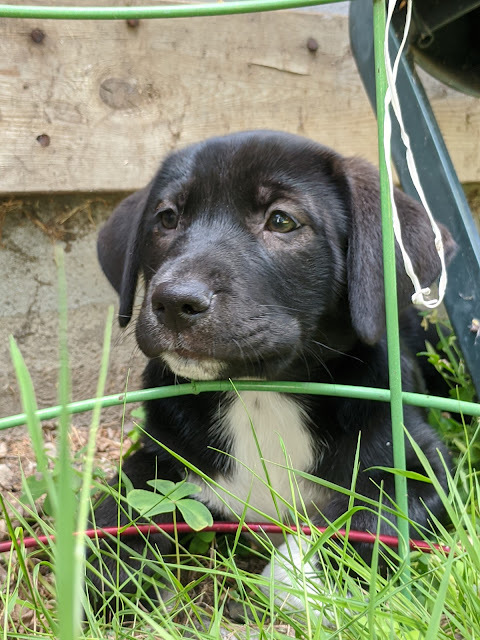 I think this is the beginning of a beautiful friendship. There was plenty of nervous whining at first, but it's gotta be tough leaving her mama and siblings behind like that. She doesn't fully realize it yet, but she's won the puppy jackpot.. with a very fun life ahead of her of being spoiled with treats, adventures, and lots of love.

We're still finalizing a name, but looks like Ruby "Billie" Blue or some variation of that. She's about 8 weeks old. Probably a husky/lab mix, but we'll do a DNA test soon to get a better idea. Super sweet and playful. And pretty much everything she does is adorable. So yeah, it's nice to have a pup again! 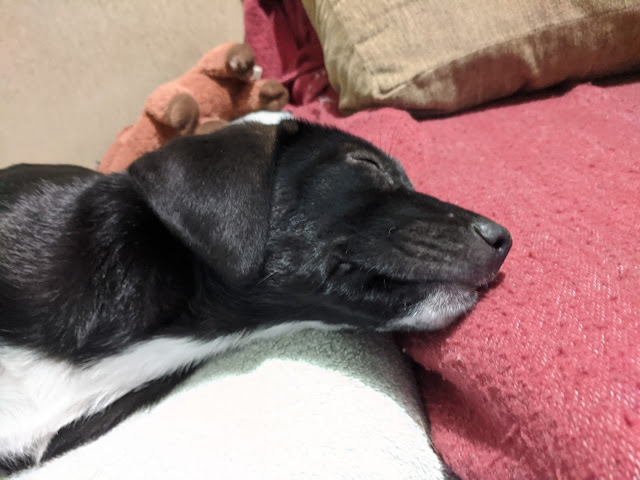 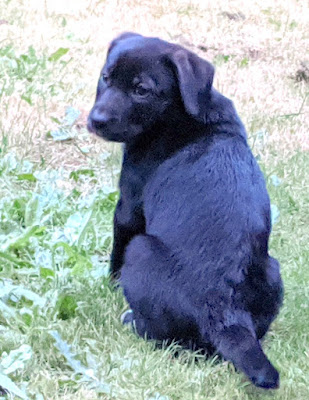 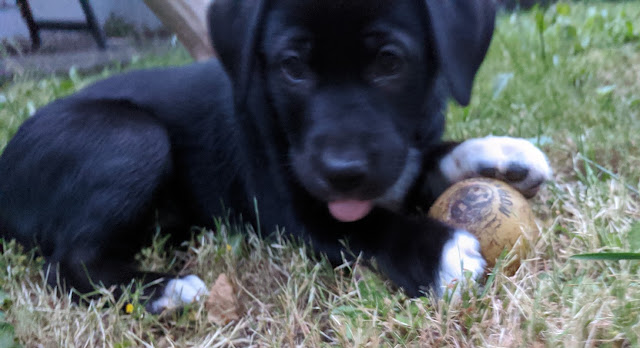 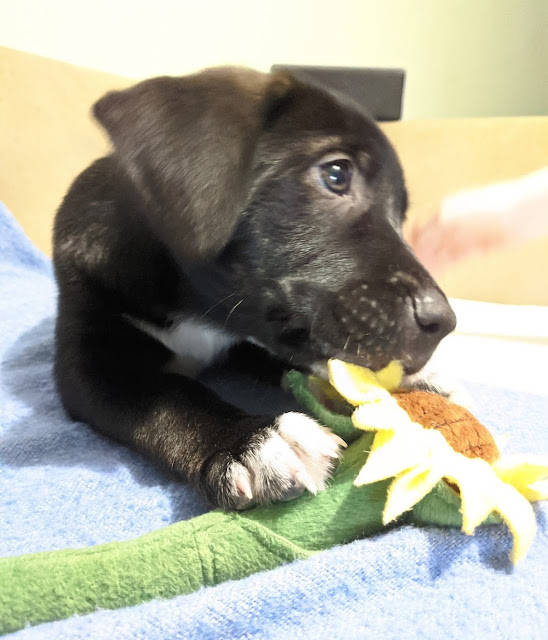