The story of my first in-person autograph 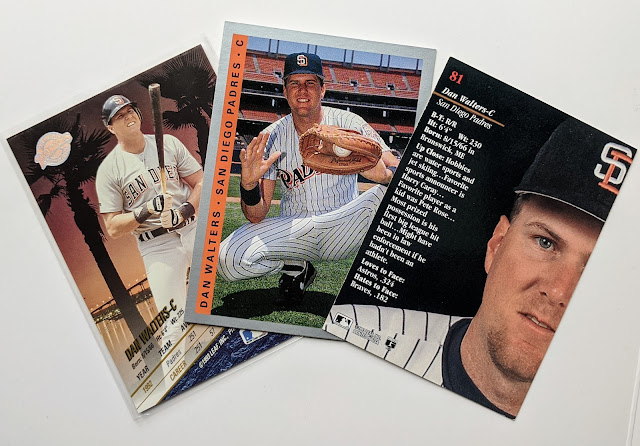 Summer 1992. I was still deep in my obsession with baseball cards that originally spanned the summer of 1990 until that of 1993. I had stumbled upon a print ad for a baseball card show scheduled to take place in La Mesa, a neighboring city in East County San Diego. I remember it was at a Jewish hall or something like that (I was a little confused at first, like "Is this a religious event?" But no). It wasn't too far from the Aquarius Roll-A-Rink I used to rollerskate at occasionally in my younger days (which at the time was really only a couple years prior).

But yeah, it was a boring weekend and I was able to talk my mom into driving me to the show. I think I had only been to one other baseball card shows before this. And that was a big one at the San Diego Convention Center, if I remember correctly, so it was a bit of a shock when I entered the building and saw just a 3 or 4 sparsely attended tables. But that disappointment didn't linger long as I was really only there for the special guest. Dan Walters had recently been called up by the Padres and had been playing well. He was there signing autographs and I was excited to get one.

In AAA, Walters had hit .317 in 1991 and then .394 to start 1992. Add to that solid defense behind the plate, and you had me and other Padres fans excited to have him as our catcher of the future. I suppose I was expecting a long, boisterous line to get his autograph, but it was surprisingly quiet with no line.

I walked up and timidly presented my 1991 Line Drive card for him to sign (personally pulled from a pack myself just a few months earlier). I think it was the only card of his I owed at the time-- he didn't get any mainstream cards until the Traded/Update sets started coming out later that year.

As for the moment meeting him.. We didn't really "connect", as he dutifully signed my card whilst chatting with the guy standing next to him (not sure if it was like his agent or just a "handler" type person or what). I'm sure I muttered a shy "thank you" and he might've given me a quick eye-contact smile, but again, it wasn't much of an interaction. From what I hear, he was generally known to be a good dude.. probably just distracted in conversation when I happened to walk up to the table. 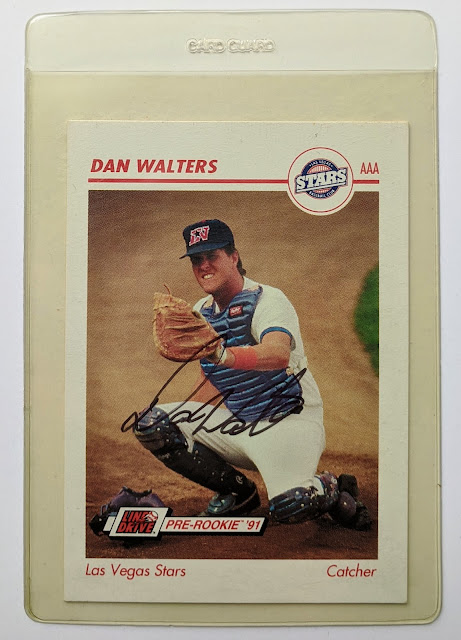 But hey, that was my first in-person autograph experience! (At least I think so.. full disclosure, my timeline is foggy regarding the total of three main IP autos I got as a kid: Dan Walters, Bill Madlock, and Dick Allen.. I think the latter pair were both at the 1992 All-Star Fanfest, so it would have been right around this same time. Oh, and I got an unknown Indians coach to sign a piece of paper for me at a spring training game that would have probably been before this [can't remember if that was spring of '92 or '93], so ok maybe Dan wasn't my first IP auto ever, but the mystery old guy at spring training isn't much of a story.) Didn't even bother with the card show going on, if I recall.. just got my autograph and headed back to the car. (I don't use Card Saver/Guard protectors anymore, but sometimes I keep my old cards in them for sentimental reasons. Like this one has most likely been in that protector since mere moments after Dan signed it.)

Oh, and did I mention he was a local boy? I remember once getting excited when I thought I saw his name among the names of kids who held Track & Field records in the gym at my middle school. But the PE coach pointed out to me that it was Dan Watters on the wall, not Walters. Oh well.. still pretty close!

Dan Walters was born in Maine, but attended high school in the same district as I was about to enter into. Santana High School in Santee was considered (at least by my circle of friends) sort of a hick school, with lots of rodeo and country music fans among its student body. Though really, who knows.. I was there a couple times for high school track meets, but that's about it. And then I had an almost-thing with a girl named Lindsey who went there (She was a friend of my first serious girlfriend, and they had a falling out because they both liked me. I have to mention this because I'm a dork and the fact that two girls ever fought over me is just incredible and needs to be mentioned for posterity, lol). Then there was a school shooting there years later.. but that's about the extent of my memories of Santana HS. (Found Lindsey on MySpace years later and she had kinda gone off the rails.. I think she was doing dirty webcam stuff.. made me sad.)

What was I talking about? Oh yeah, Dan Walters. Well, the Padres front office apparently though enough of him as their catcher (or at least platooning with the likes of Bob Geren and Kevin Higgins) to let Benito Santiago walk as a free agent after the '92 season. But Dan struggled to bat above the Mendoza Line in 1993, suffered a spinal injury on the field that cut his season short, and was released after the season. After missing all of 1994 rehabbing, incredibly he made it back onto the field, playing AAA ball in Colorado Springs (Rockies) in 1995 and Edmonton (A's) in 1996 before hanging up his cleats. 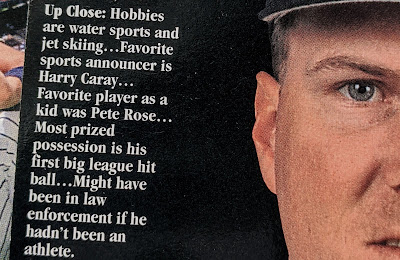 Shortly after his playing days were over, Dan joined the San Diego Police Department (as sorta prophesied on the back of his '93 Studio card). After a few years on the beat, he was tragically paralyzed from the neck down after a 2003 shooting while in the line of duty. He eventually did some motivational speaking and made slight progress regaining some movement in the ensuing years before passing away at age 53 on April 23, 2020.

Let's take a look at the cards of his I've got. 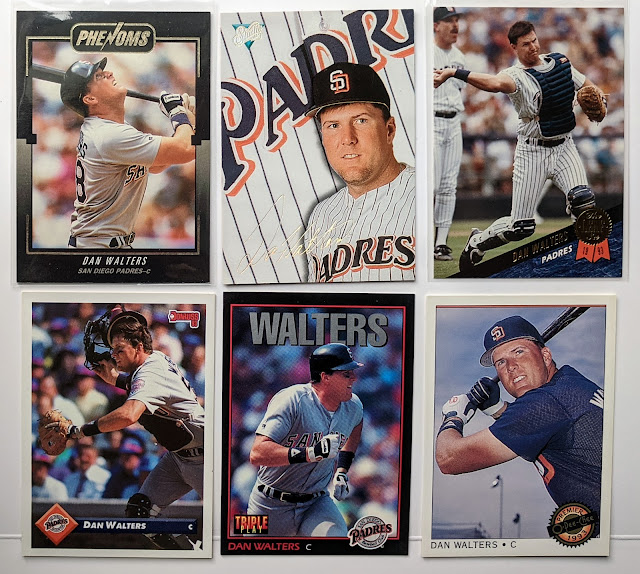 Some Donruss, Leaf, and an OPC. 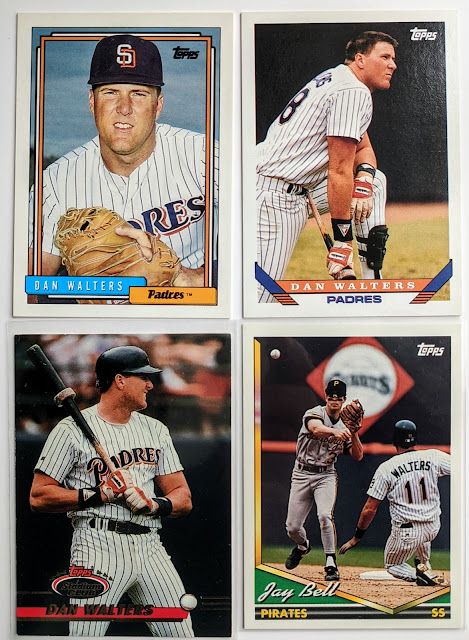 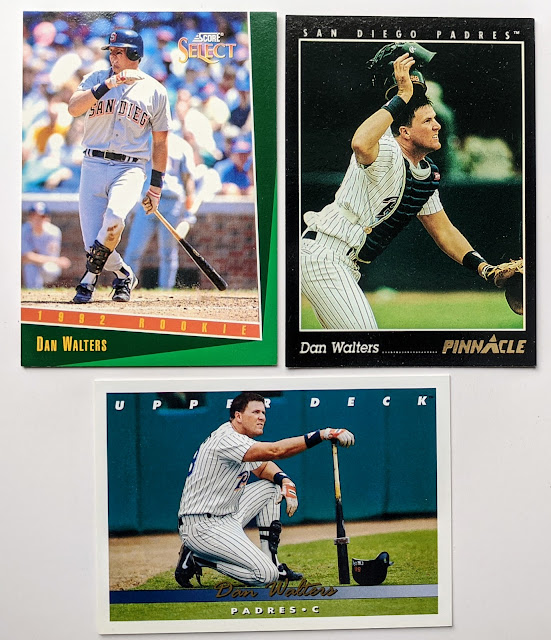 More cards. I might have to include that year of Pinnacle into my "early 90s black gold" collecting project. 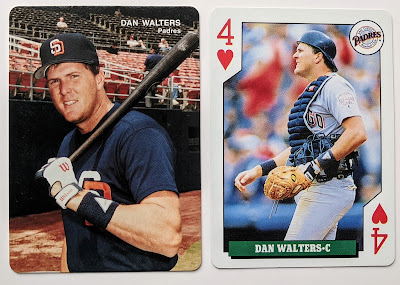 A pair of round-corner oddballs.

Per TCDB, he only has a total of 42 cards out there (and nothing low-numbered, refreshingly), so completing a "master set" of his cards seems doable. I'd be down to trade for any I'm missing.

As for pending pieces of the PC... Below are my latest purchases at COMC: 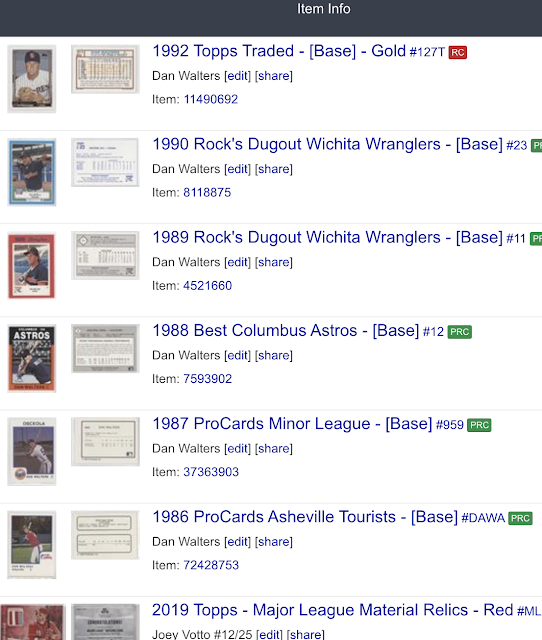 That's all his pre-91 minor league cards plus a Topps Gold parallel. Looking forward to eventually getting these in-hand. 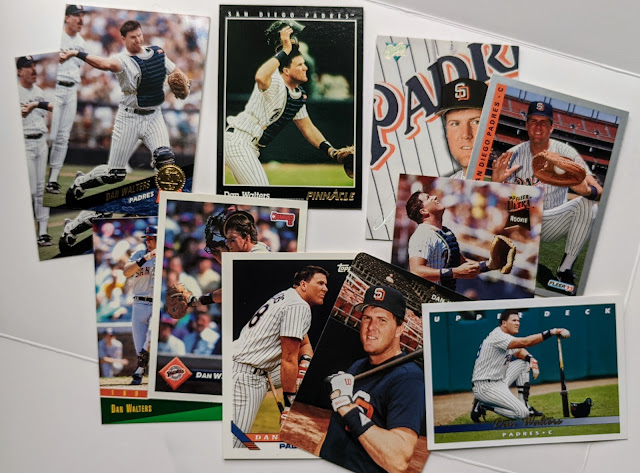 I also have several dupes I don't need. If anyone was inspired by Dan's story enough to start their own PC of the man, I'd be happy to send you a PWE to get you started. Just let me know.

Thanks for reading and have a nice weekend.
Posted by defgav at 2:59 PM