Hey, I haven't posted in nearly a couple weeks. Time for some card soup. 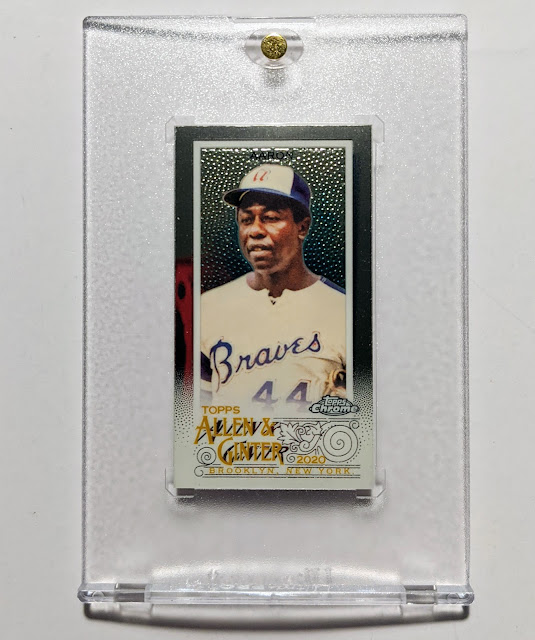 Rod kindly dropped another box of miscellaneous cards on me last weekend. While I ended up with a big stack of keepers, I think this Hank Aaron mini from new Ginter Chrome was my favorite. Rest in Peace, Hammer. 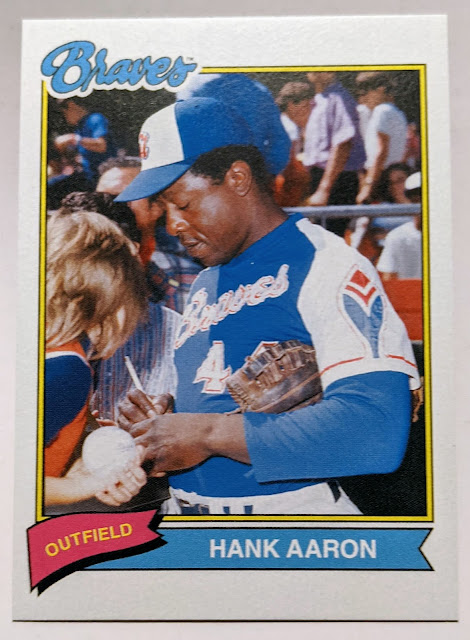 More Aaron. I haven't posted since he passed, so this is sorta doubling as a tribute post.
But yeah, I too got one of those boxes of Topps' online offering Super 70s cards that gave folks a glimmer of hope that Topps was putting out a set of cards that old-school collectors could appreciate. I'm in the same boat as the other bloggers who've reviewed this offering: A collector tiring of modern cards/players, looking for a nice throwback set with fan favorites I grew up loving, at a decent price without having to battle in the current retail card hellscape. 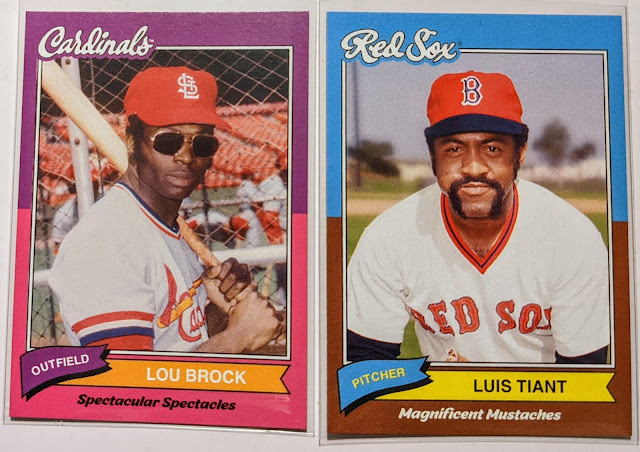 The design is a '77/78/79 Topps mashup. The inserts are similar but bring '75 into the mix, and come 2 to a box. While the price-per-card wasn't great, at least I collect just about every guy I pulled, so even though I didn't luck into an autograph, I don't regret the purchase.
I should mention I'm a fan of the Super 70s Sports twitter account and have been a follower since my early days on the app. It's good for an occasional laugh or interesting perspective, even if I don't always agree with sentiment. Also, the guy who runs it-- Ricky Cobb-- has a tendency to repeat his most popular tweets a few times every year.. which I find a little annoying and repetitive.. as are the frequent tweets hocking t-shirts, but I get that it must be hard trying to make a living as a Twitter personality. By and large, the account is a great follow.
Not sure how much of a say Ricky had when it came to these Topps cards. I'd have loved to see it get a little more "out there". In one of the first reviews of the set I saw, there was Mike Piazza featured as a Marlin, so I got excited for some quirk, but no, it's a pretty straight set apart from that one card. Ricky loves to show crazy pictures like Dave Parker wearing a hockey mask on the field-- would have been cool to get that on a card, but nope Cobra's card is a yawner. Or how about a new Mark Fidrych card? That would have fit right in with the spirit of the set, but Bird isn't in there. Oakland's Matt Olson has a card in the set for some reason. I checked, and Matt Olson has never once been mentioned in a Super 70s Sports tweet. (Fidrych has been mentioned dozens of times.)
The set is like a third big-name HOFers, a third current stars, and a third lesser-known 70s/80s fan favorites (these retired guys also find themselves as the autograph checklist, basically). Looks like all the autos are stickergraphs (boo!) besides the curator Ricky Cobb himself. I bet Topps gave him a list of "fan favorite" players they had a stockpile of autographed stickers of on hand and let him narrow down the list from there for his curated set. 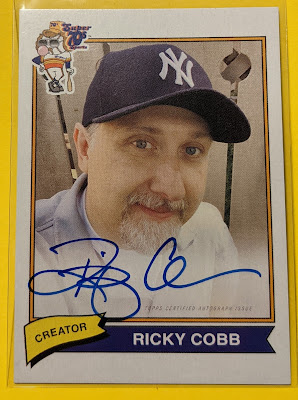 After the mild disappointment of not pulling an autograph from my box, I was compelled to track down a Cobb auto on eBay. I guess this'll go to the "bloggers cards" area of my collection. He's not really a blogger but close enough.
Despite plenty to gripe about (oh, also the backs are very hard to read), it's a fun set and while it could have been a lot better, I appreciate the attempt.
I could spend a lot of time daydreaming about what a Baseball Card Breakdown curated Topps set would include, but I guess that's why I make customs.
- --o
I made 3 purchases from the Topps online store in 2020: a Project 2020 Rickey Henderson earlier in the year, then that box of "Super 70s Sports X", and finally a Throwback Thursday set in December..... 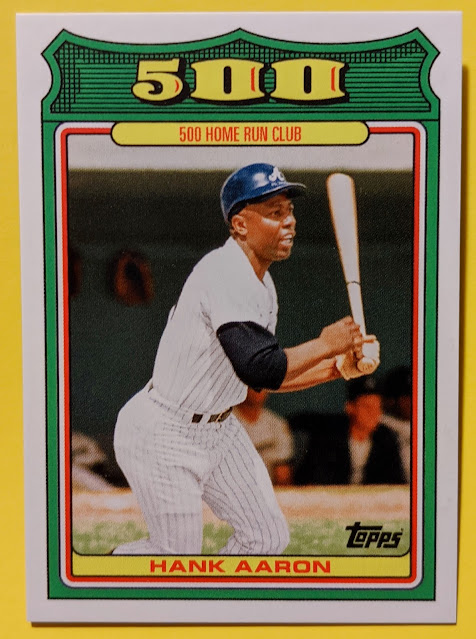 This is 2020 Throwback Thursday Set #49 featuring the 1988 Topps Football 1000 Yard Club inserts design, helping me add yet another solid Hank card to the PC.

I had just days earlier noted to myself how I dig those glossy Topps Football 1000 Yard Club inserts after getting a few in a previous misc box from Rod, so when I saw the 6-card set up for sale, I gave Topps my $19.99. Looks like the print run ended up being 503, damn near scare compared to that Bernie Sanders Topps Now card of him sitting down (91,169 printed!)
I included an original '88 insert in the above pic to show they did a pretty good job recreating the design, though the new ones don't have the thick gloss of the originals. 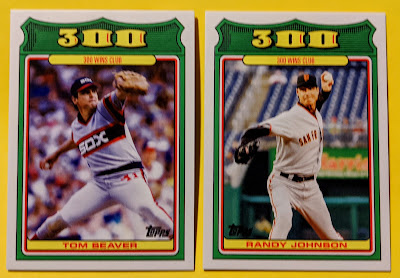 I'm a sucker for big round-number milestones like these, plus I collect all 6 of the dudes included, so it felt worth the money. 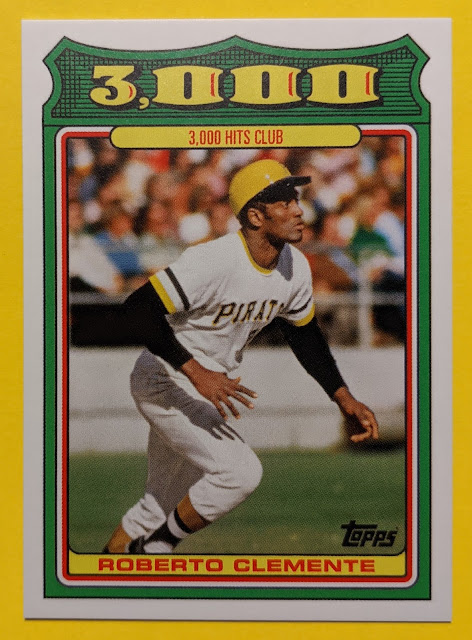 The Clemente is the star of the set in my eyes. Beautiful!
- --o 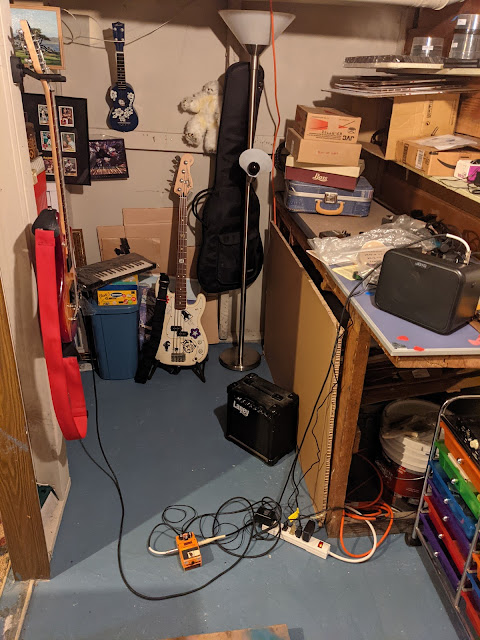 One reason I haven't been posting as much lately is that I got my little "music room" area going in the basement, so I've been spending some after-work time jamming out. After not really picking up an electric guitar for a long time, it's been a lot of fun just noodling around and trying to remember how to play songs I loved rocking out back in my 20s when playing guitar for an hour or two was part of my daily routine. Some songs have faded from my brain over the years, but others come flooding back with crazy muscle memory.