In a group email a few days ago, my boss accidentally typed, "The Gavin and I are available to help..." And so now I have the work nickname of The Gavin. Haha. I like it. Kinda like The Fonz or The Flash, but not quite as cool. And sometimes I have fun with it and refer to myself in the third person as The Gavin.

The Gavin can't help but think of Rickey Henderson when this happens. (...though Rickey didn't call himself The Rickey.. that might've been a little over the top!)

So if you're on Twitter you probably saw the Project 2020 cards that Topps has been offering online. Basically the idea is they got 20 different artists and each is getting creative with 20 iconic Topps cards, with the offerings spread out over the summer, each card being available to order during a limited-time window. Kind of a cool idea, though the $20 per card price understandably turns a lot of collectors off. And honestly many of the cards look dumb as hell.. (Topps Project 2020 eBay search)... but I suppose that tastes vary when it comes to art appreciation, so what looks dumb to one collector could be loved by another. And some of the cards look kinda cool to me, but not "will-pay-$20-for" cool.

But one card that seemed to get near universal approval was artist Matt Taylor's "totally radical 80s" take on Rickey Henderson's 1980 Topps rookie card. I liked it so much that I caved and purchased one for myself pretty quickly. 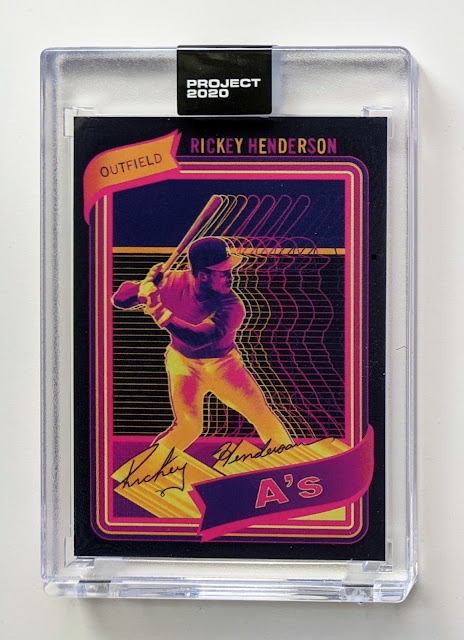 Sure is a cool looking card! I'm definitely gonna have this bad-boy out on display for a while. 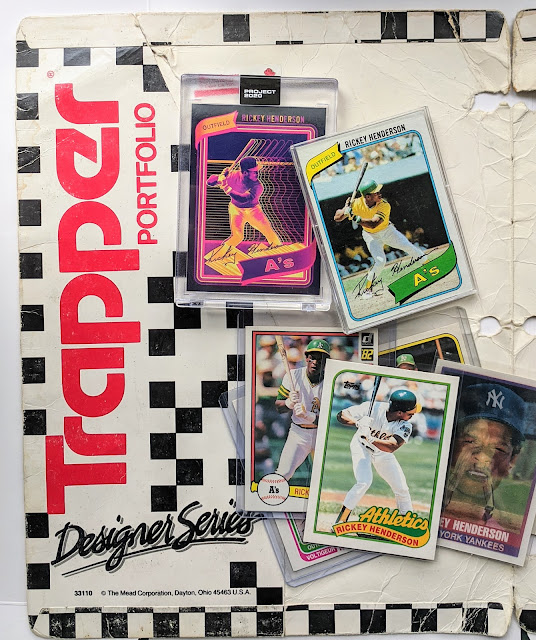 Back to the 80s! (That's a vintage Trapper Keeper folder from my youth, btw. Does this now count as a Sentimental Sundays post? LOL) I wouldn't say that the purply interpretation is an improvement over the perfection of the original green/yellow cardboard classic, but I think it's a sweet alternate view of a favorite. I look at it and just start hearing the chill 80s synth tunes fill my head.


Fingers crossed this is the only Project 2020 card I end up buying, but I guess we'll just have to see if anything else grabs me by the time the project is over. 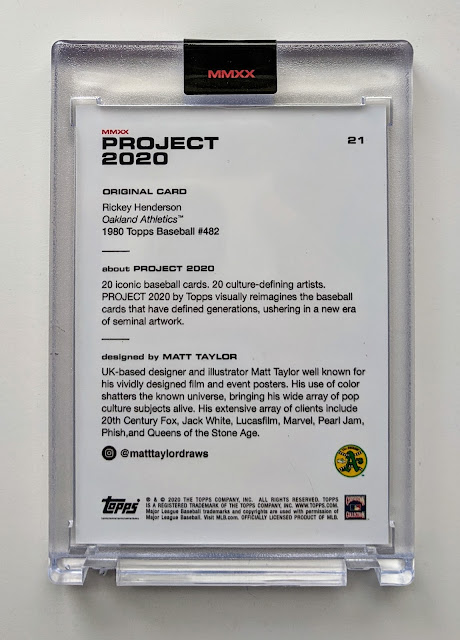 The print-run was 2104, which I believe is among the most plentiful of these offerings so far, but I'm not really sure. Wait, this same artist's similar version of the Jeter rookie apparently sold many more (9322).

A neat looking card in its own right, but I'm fine without this one. If, say, these were regular ol' inserts in flagship or Archives, I'd probably try to score myself more.. but at $20 per card, gotta be selective.


Oh, the most ridiculous one so far is the allegedly "1983 Topps Tony Gwynn inspired" card that is simply a random mid-80s Gwynn picture in a simple design clearly mimicking 1991 Fleer.

WTF? It's like the artist googled "Tony Gwynn baseball card" and just quickly crapped this out using a couple images that popped up in the search results. There's no connection to the '83 rookie card it's supposed to be paying tribute to.


But the ones that seem the laziest to me are those that basically just add some tracing to the card design.

Not to disparage someones artistic output, but... Why? No way I'd pay $20+ for that! Even a buck for that would seem like bad deal to me. But to each their own, I suppose. Collect how you want.


So there's my thoughts regarding Topps Project 2020. What do you think?
Until next time, this is The Gavin saying, "Thanks for stopping by!"
Posted by defgav at 3:59 PM