When Chris from View From the Skybox first announced his mixed group break to raise funds benefiting children victimized by the typhoon that ravaged the Philippines a few months back, I thought it was a very noble idea, but perhaps a bit ambitious. Sign-ups were slow, and though Chris was determined to make it happen, it looked like the break was doomed to be scraped due to lack of participation.

I hadn't planned on joining the charity break, since I'm not a team collector, plus it was a bit pricey, the sets involved didn't really excite me, and honestly due to the slow start I was a little doubtful it'd ever come to fruition. That said, I couldn't help but keep noticing the conspicuously still-available reigning World Champion Boston Red Sox. The Sox selection in my trade stack was down to next to nothing, with Mark Hoyle being the beneficiary of what little I had. Plus the team has included all-time greats I collect such as Yaz, Ted  Williams, and Fisk, as well as current/recent guys I like such as Jake Peavy, Adiran Gonzalez, and David Ortiz. So I splurged a little and signed up for Boston in the break, plus grabbed a deal for a couple discounted random team slots while I was at it. Thankfully, Chris was able to get the break into the black shortly afterwards and it was able to go down as planned.

The break was streamed live, but I was in the middle of moving, so didn't get to catch much of it. I found out the next day via the recap post that random teams I got were the White Sox and the A's. I was happy to complete the pair of Sox, but Oakland was a bit of a bummer since my trade stack is currently heavy on A's already.. plus the recap post didn't show a single hit or anything notable for the team. But the good news is I was able to agree to a swap with Bay Area blogger Fuji, with me getting Cleveland, one of the random teams he got.

So with all that backstory out of the way, let's go ahead and show you what you're here for: pictures of baseball cards! 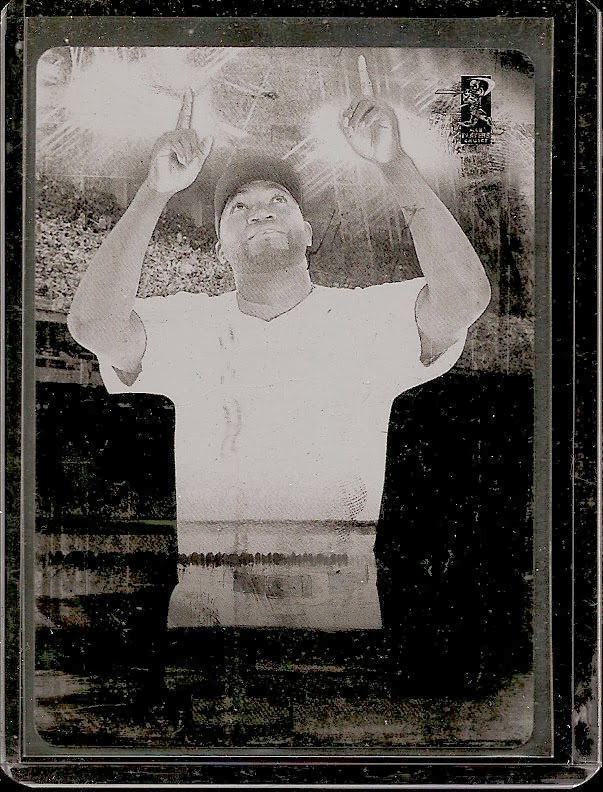 Kicking off with the best of the lot, a 1/1 black printing plate of David Ortiz! This is my first true 1/1. I would have been pretty happy with a printing plate of any Joe Shmoe journeyman or fringe draft pick, but the fact this is a 1/1 of a borderline Hall of Famer is especially sweet. Another 2 or 3 productive seasons would get Big Papi to 500 home runs. He's already secured a place in baseball lore by helping lead long-suffering Boston to finally another World Series Championship.. plus a couple more since. The missing team name/logos leave something to be desired on an otherwise cool picture-- making it look like Ortiz is wearing a plain white t-shirt-- but still, I'm very happy to end up with this card. 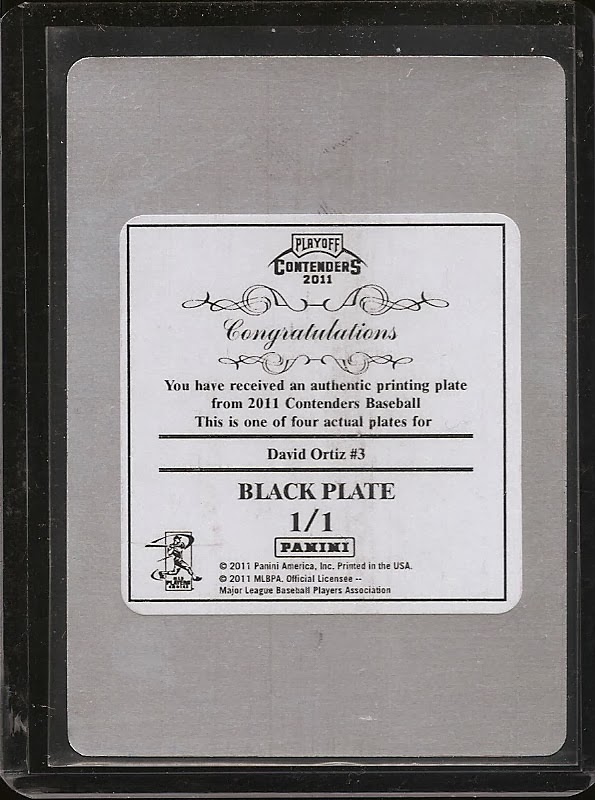 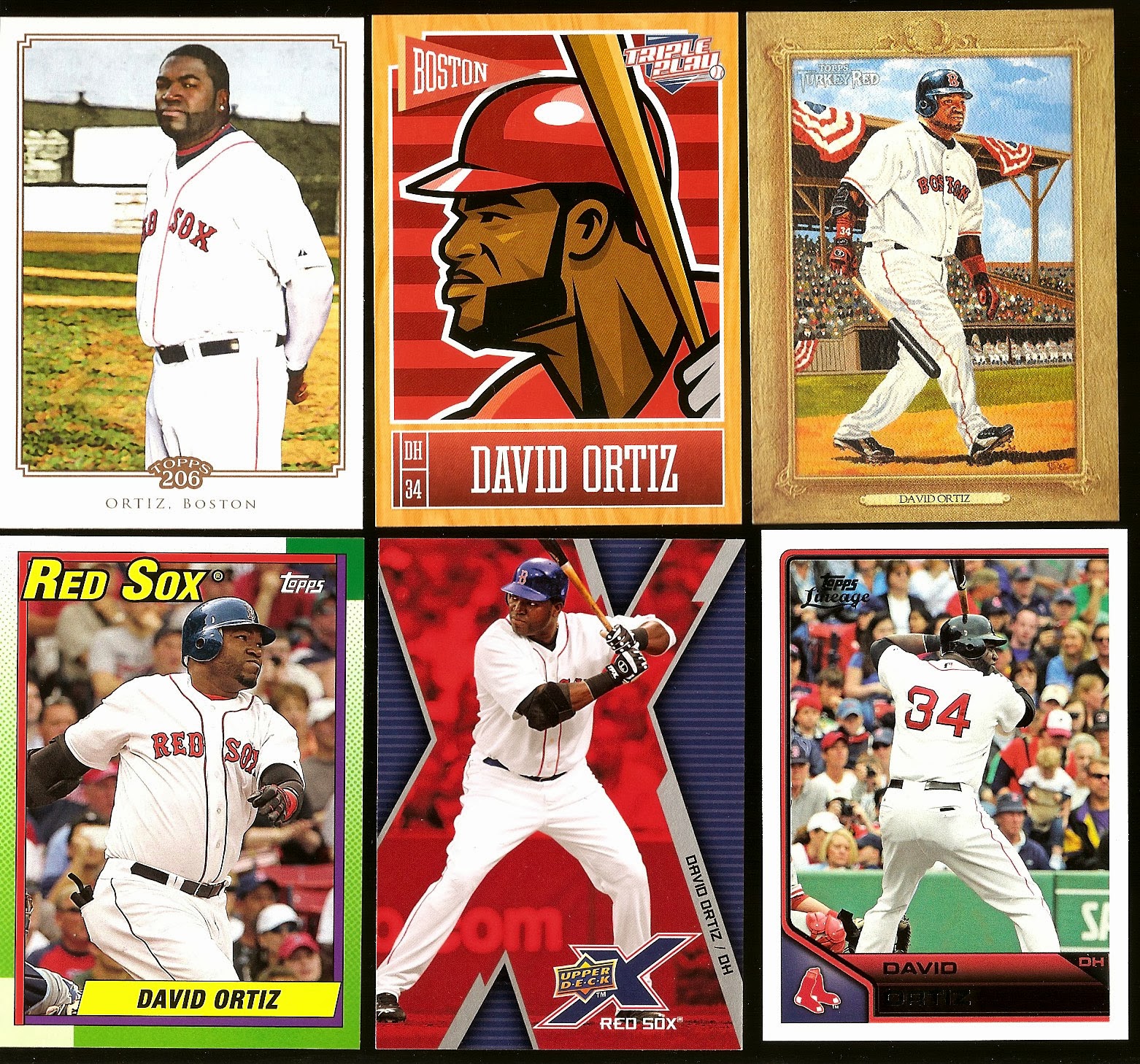 For some reason I kinda like Josh Beckett. *shrug* 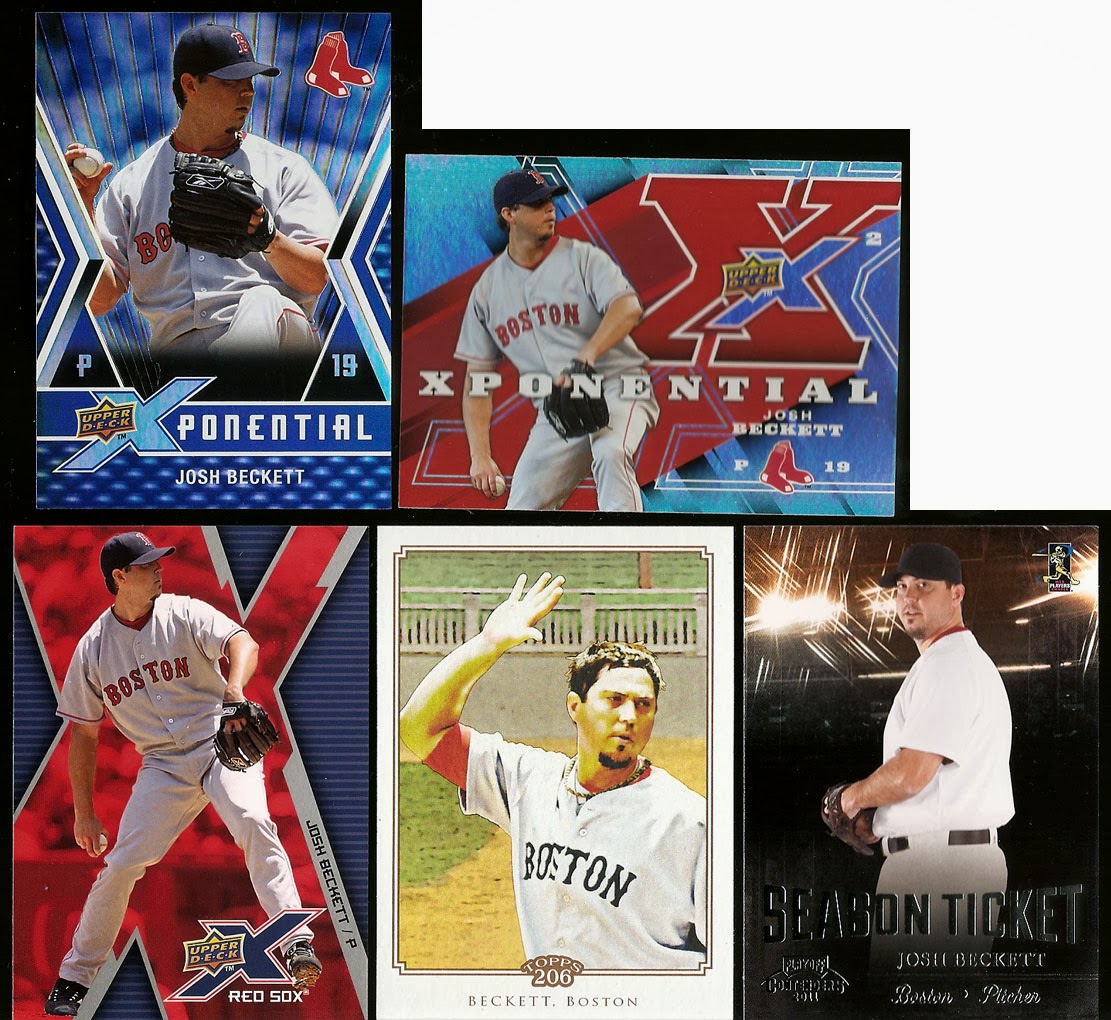 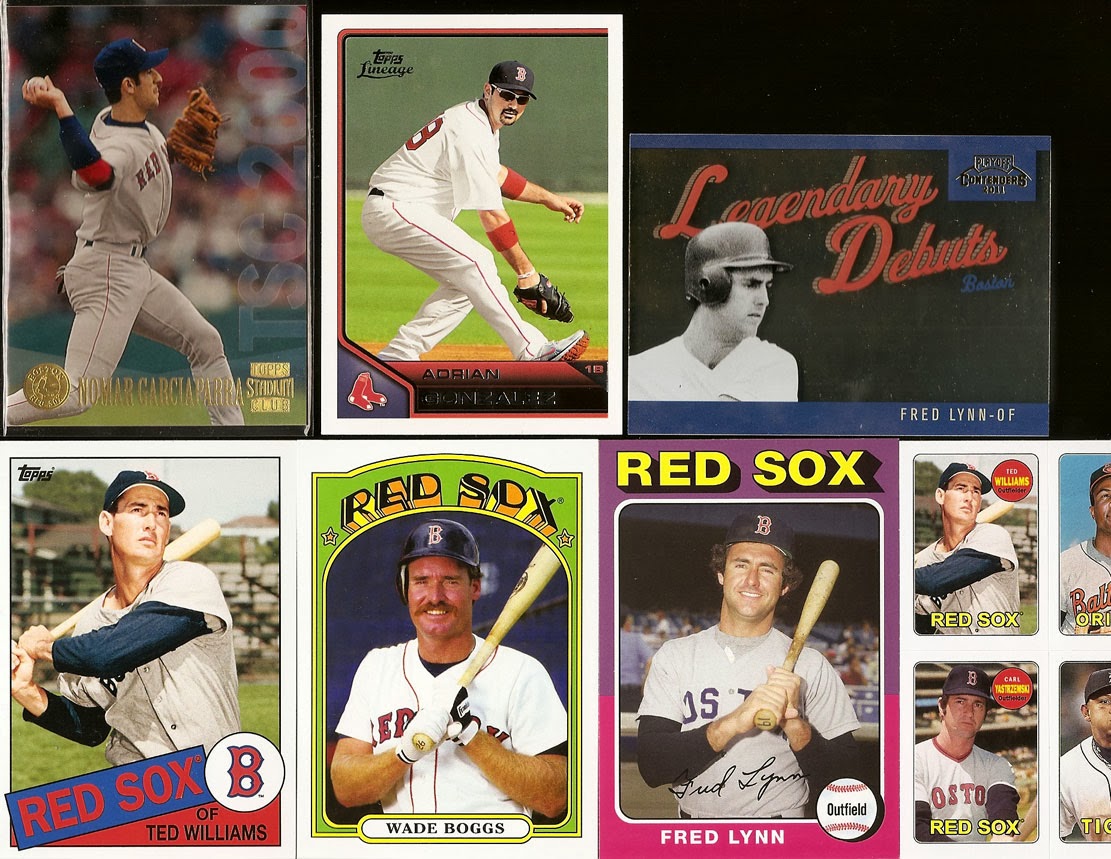 The White Sox netted me some cool Frank Thomas cards.

And here're some more neat cards. 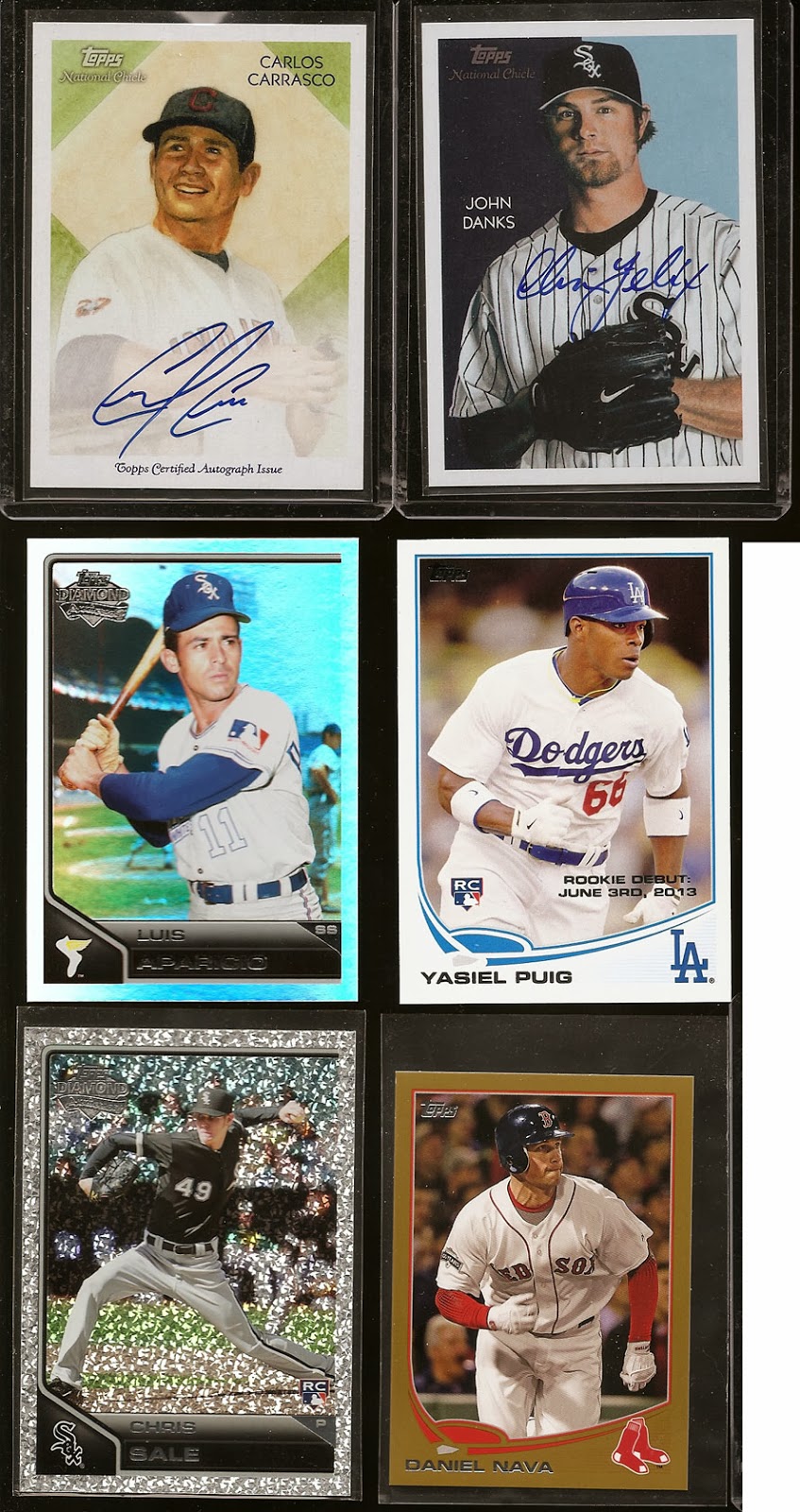 The John Danks auto is actually singed by the artist, not the player. But still cool. /10. The break netted two Carrasco autos, but Fuji got to keep one of them, per the terms of our agreement.

Chris threw in a few unopened packs and bonus cards, too. He's a good dude! Thanks again to Chris and everybody who helped make the break happen.
Posted by defgav at 8:26 PM