So, yep, I've moved into the new house! Still a lot of unpacking to do-- the card collection is notably still within its corrugated womb, waiting patiently to be rebirthed into this magnificent world-- but we've made a lot of progress over these past couple of weeks. Nothing like a move to make you realize how much stuff you own. Beth isn't crazy about my semi-hoarding nature, and the fact I have "over 500?" baseball cards. If only she could fully appreciate my relatively narrow wantlist! I'm not even a team collector! LOL

But anyways, the other day I received a double-dose of eBay wins in the mail.. christening my new mailbox with what will hopefully be a bountiful cornucopia of cards over the next many years.

First, my original "top collecting guy" from back in the day, none other than Reggie Jackson. 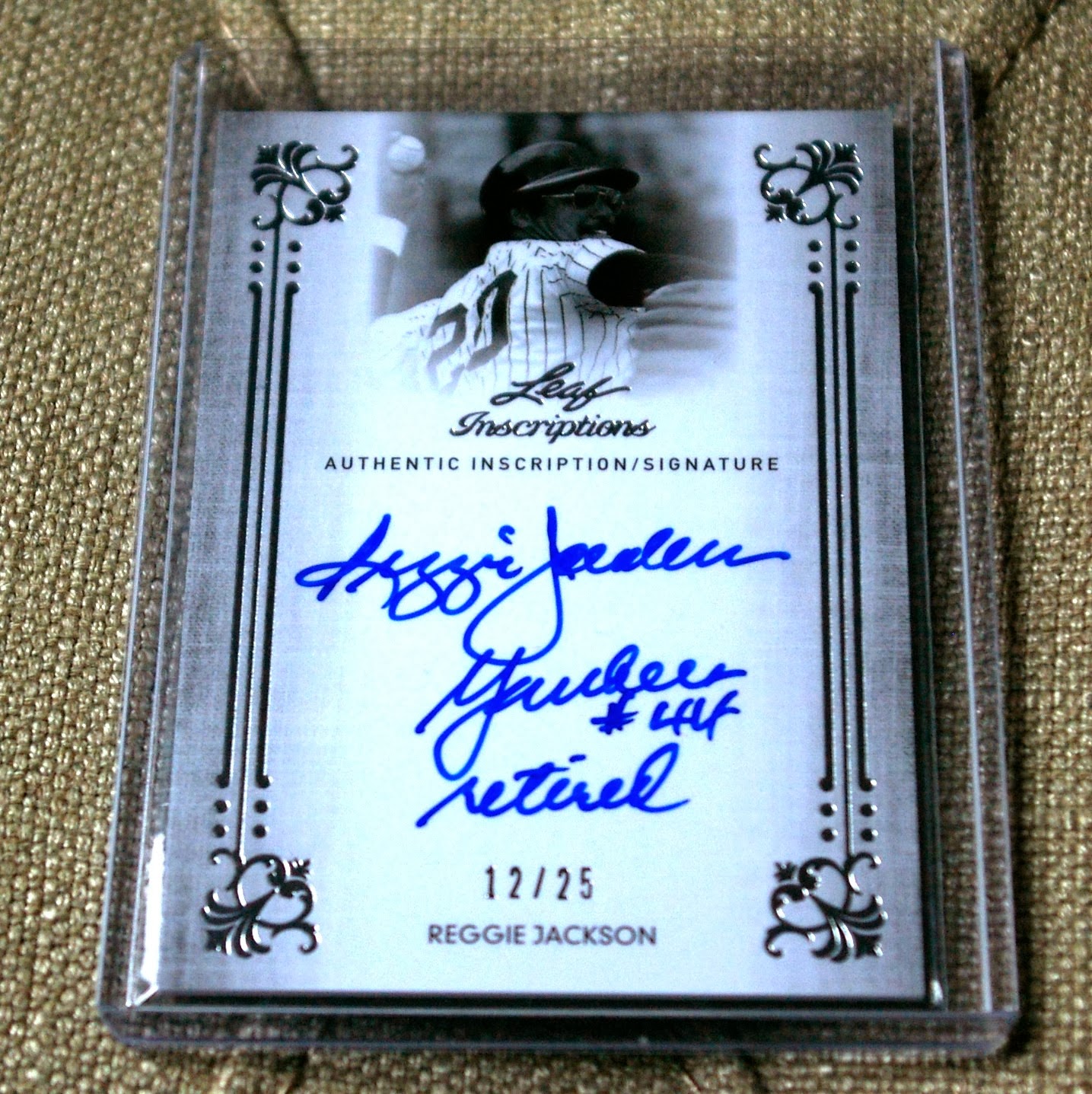 While I don't actively collect Mr. October these days really (just got burnt out, I guess), I think he's still the player I've got the most cards of. I used to keep track of that kind of stuff, but not too much anymore. While I had an autographed ball (since sold when I moved from San Diego to Portland) and an autographed 8 x 10 in a wood plaque (which I still own and proudly hang), this is my first autographed card of his.

It's a cool one. Loyal readers of this blog will know why I went after this particular card.. that's right, it's a "Christmas Card"! The whole inscription thing is cool, too.

But one thing that puzzles me about this card.. his jersey number. 20?! When Reggie was with the A's, and the lone year in Baltimore, his number was 9. When he went to the Yankees, and then later with the Angles and a brief last hurrah with Oakland, he went with 44. So where does 20 come in? He obviously appears to be in Yankee pinstripes here. Perhaps in spring training when he first signed with New York in '77? Can anybody shine some light on this mystery?

Another weird thing about that Reggie photo.. he's fielding, though he's wearing a helmet. Outside of John Olerud and Dick Allen, that's not something you see very often.

Also arriving on the same day were a dual win of 2004 Topps Retired autos.. also known as "the set I spend way too much money trying to complete."

My remaining needs are down to 11 with the recent addition of The Duke. 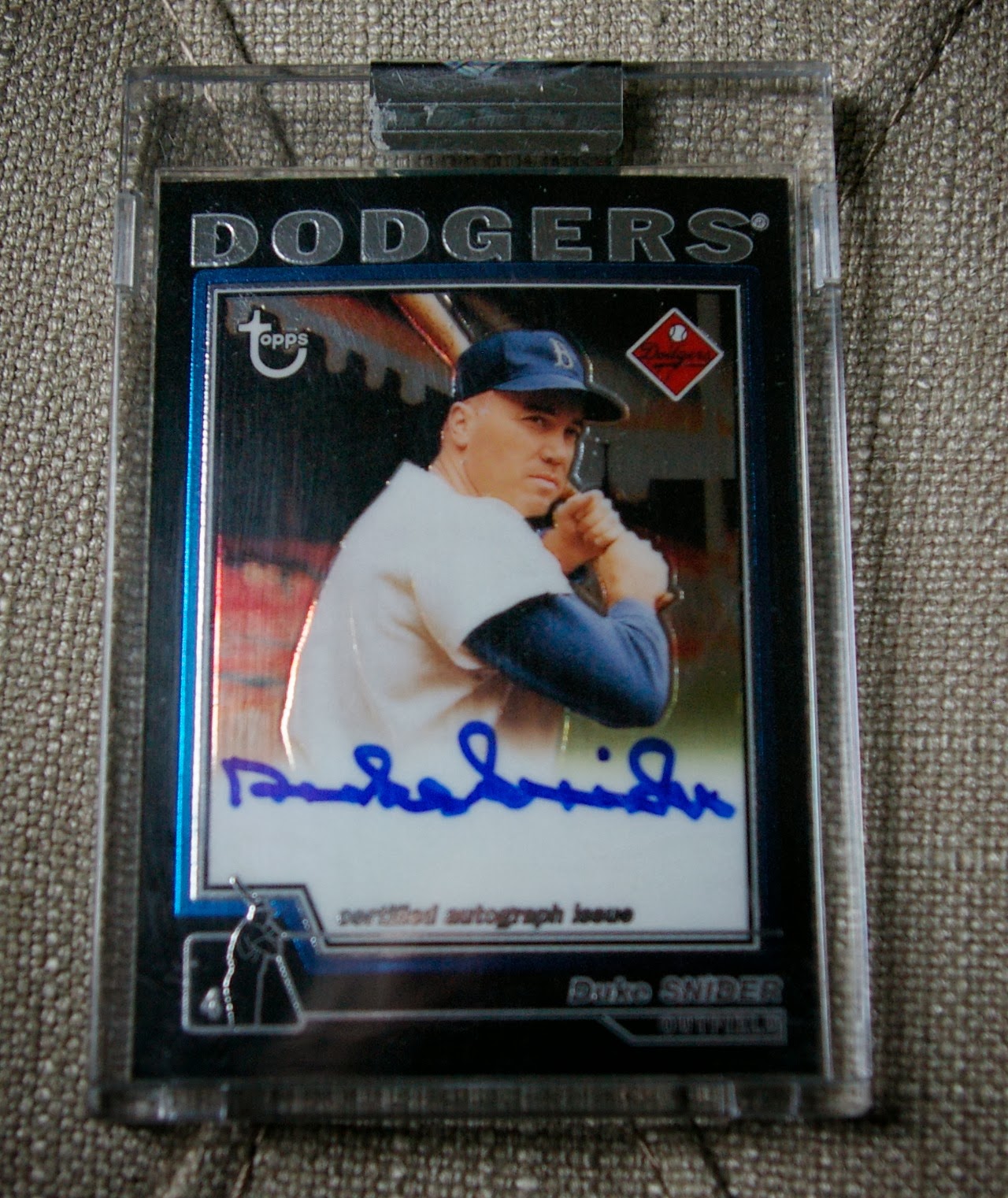 I like finding "easter eggs" of significance in numbers and dates, and so I thought it was extra neat that I received this card on February 27th, the 3-year anniversary of his death. R.I.P., Mr. Snider.

And from the same seller, I upgraded to this Yastrzemski with bold, blue ink. 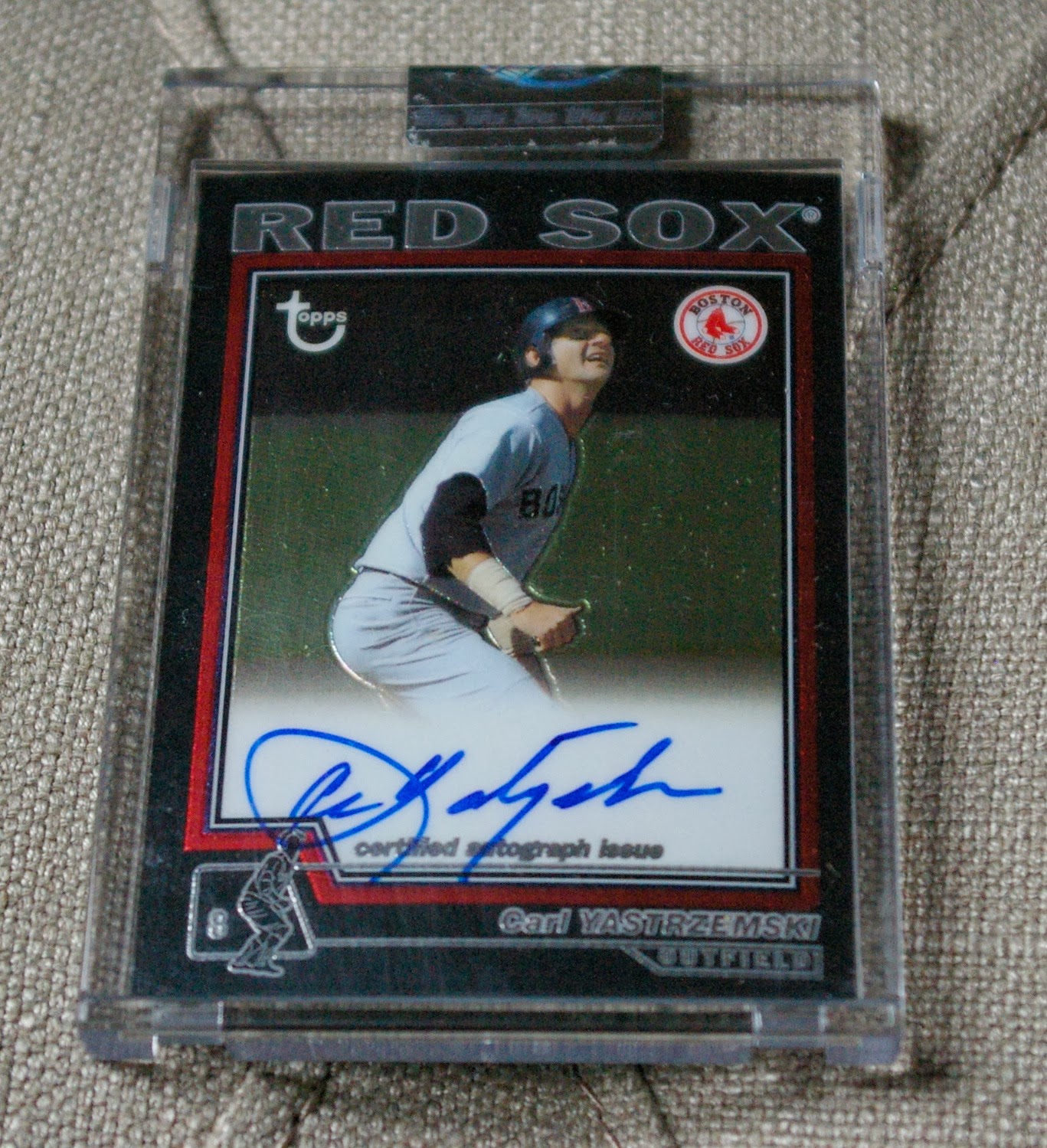 Way back in July 2013, I picked up this card but with faded black ink. Since this is a "Group A" auto, I believe it means there were only 25 of these unnumbered non-refractor copies made (plus another 25 #'d refractors). So that would mean these ink-color variations are actually more scare than the refractors. Not sure how many cards Yaz scrawled on with the crappy black Sharpie before he tossed it and cracked open the fresh blue pen, but there's gotta be less than 25 of each, if my math is right. I'll still be on the lookout for a refractor to complete my Yazfecta, but these 2 autos are 2 more autos than I ever would have thought I would own of this legend back when I was a kid pulling his early 80s cards from vintage-to-me packs.

Oh, and the seller was super-freaking cool and threw in a bunch of great bonus cards and a couple unopened packs which I could easily make an entire post out of showing off but instead will just keep it to image-less this paragraph, at least for now. But yeah, I always like publicly tipping my cap to sellers who go above and beyond, so thanks gatoradrrr.

In other 2004 Retired goal updates, a few weeks ago I upgraded to a refractor of the George Foster auto. That gorgeous blue sky and green grass behind him look great all rainbowy n' shit. 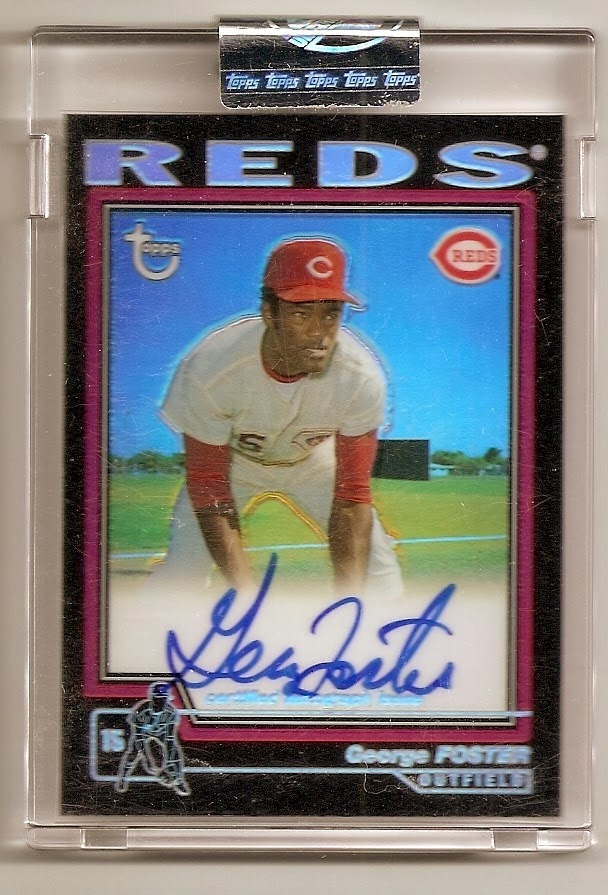 But bringing this post back to the topic of cards received at the new house, yesterday my first non-purchased card arrived. After I sent out a "here's my new address" email to a few guys I've dealt with recently, Judson of My Cardboard Habit went ahead and sent me a housewarming card.. 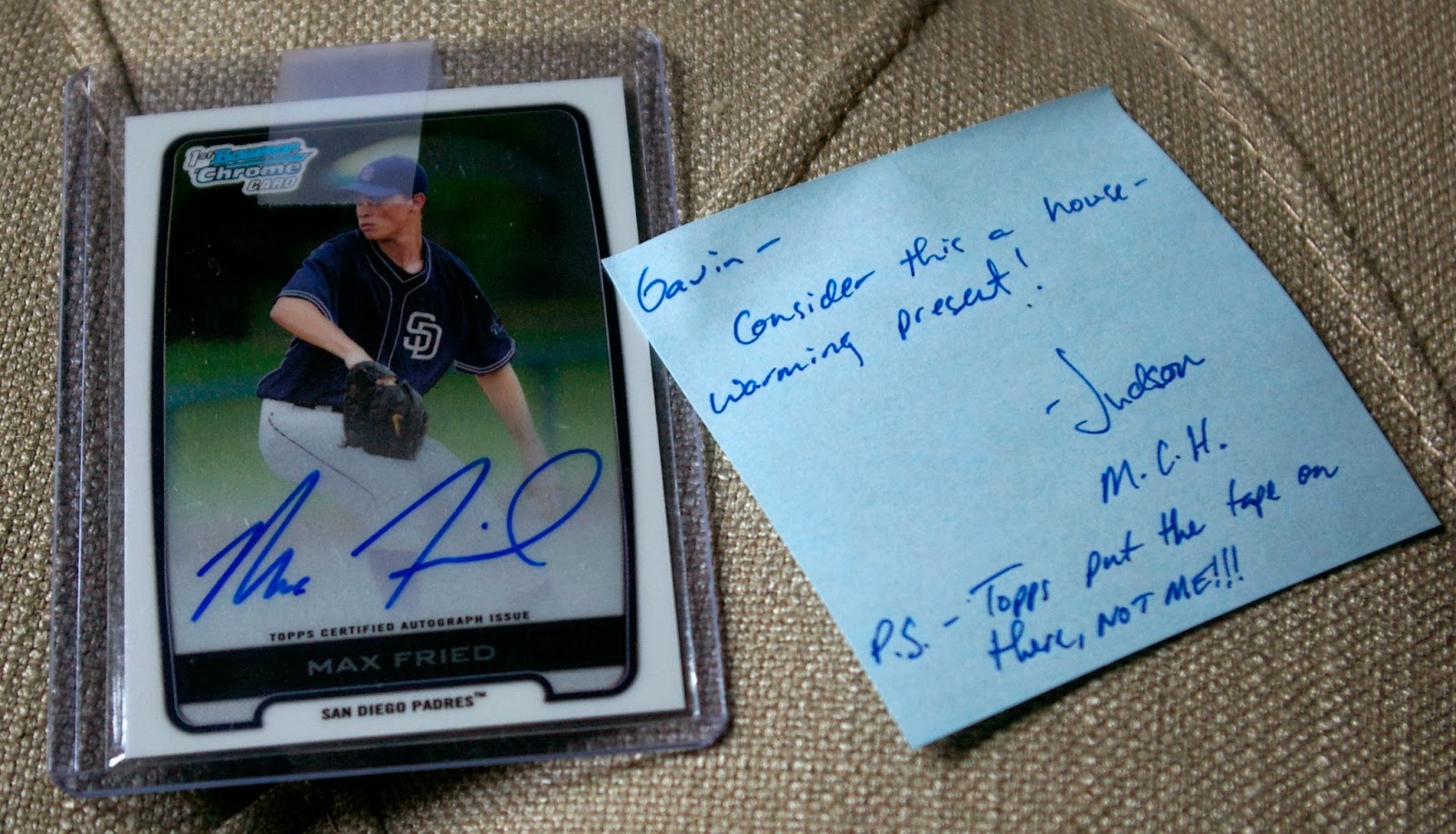 Seriously?! Judson might be my favorite blogger now. Not only does he run a great blog (hey, plug for his Gypsy Queen '14 half-case group break.. sign up if you wanna!), but I think this is the third time he's sent me free cards, and I don't think I've ever actually sent him anything. I've just been the lucky recipient of contests and his general generosity. But yeah, I definitely owe you some decent cards, J. Meeks! (Just none of my Harpers! I want those!) But I'll do my best to return the favor sometime soon.

I've heard this Max Fried guy get talked up a few times by knowledgeable Padres card bloggers all the way to the backstop and Bleedin' Brown and Gold, and I know San Diego is hoping for big things from their 2012 top pick in the not-too-distant future. Great to get a sweet on-card auto of him, and now I feel personally invested in his success. Go Max! and thanks again, Judson!

In other news, I'm experimenting with turning off the word verification for commenting on my blog. You can now (at the moment, at least) feel free to go comment on all my posts without worrying about the annoyance of typing in some dumb random numbers or letters. Go to it! Now! Post ALL the comments!

No? Still here. Maybe I need to do one of those contests where every comment is an entry.

I mean, I'm good with the level of comments I get, but you know, it's always nice to get some interaction going.

So yeah, I'm just facilitating an easier time for would-be commenters. If I end up getting frequent spam comments, I'll probably turn it back on.. but I've noticed a few blogs out there have it turned off.. and it's always a nice surprise when I go to post a comment and get to bypass the annoying wavy text in a box tripping me up.

Some blogs go as far as to hold comments hostage until they are approved by the blog administrator. Is this really necessary? Maybe if you get lots of spam comments, I guess. I haven't noticed much "trolling" (assholes commenting trying to start shit) in the card blogosphere, so I doubt that's the issue. Maybe these blog owners are trying to keep out foul language like what I've parenthetically used in my previous sentence.

That brings up another issue for bloggers to grapple with: to curse or not. I like to think I'm a pretty polite guy.. usually remember to hold doors for ladies, cover my mouth when I sneeze and the like. I'm no stranger to dropping obscenities with close friends in private-- and when I get frustrated, I'm liable to lose my cool and shout out depraved, offensive stuff that would get me thrown in prison in many countries. Oh, and sometimes I freestyle gangsta rap around the house, often very offensive, funky rhymes.

But back to my point. I don't cuss publicly too often. I try to keep this blog somewhat clean, but don't really censor myself either. I know a lot of you fellow bloggers are religious and/or school teachers and/or parents of young children.. you know, respectable people who handle themselves with dignity and poise (as opposed to those of us who just handle ourselves.. LOL. and yes, I just linked there to a post of mine that I haven't written yet. I haven't even started drafting it yet. But sometime this month, I will post it and that dead link will retroactively blossom into a working link), and I don't want to scare anybody away with crude language.

When I first conceived of Baseball Card Breakdown, I thought the guy who breaks down in offensive tantrums over baseball cards would be a novel shtick, but while I might rage a little once in a while, I've generally kept my blogging mild-mannered.

You should have heard me the other morning when my toilet broke, though.. man, I lost.my.shit. It was like a Three Stooges episode, with water literally shooting up out of the toilet tank into my face, meanwhile I'm becoming late for work trying to deal with this shit. (Don't worry, there wasn't literal shit involved, at least.) But it all worked out. That's part of living in a fixer-upper house, I guess. Still, though, love the new house. Moving was a bitch, but this place is definitely an upgrade over our last place. Once I get my "carding area" set up, I'll try to post some pictures.

Thanks a bunch for reading my ramblings and enjoy the rest of your weekend!
Posted by defgav at 11:46 AM